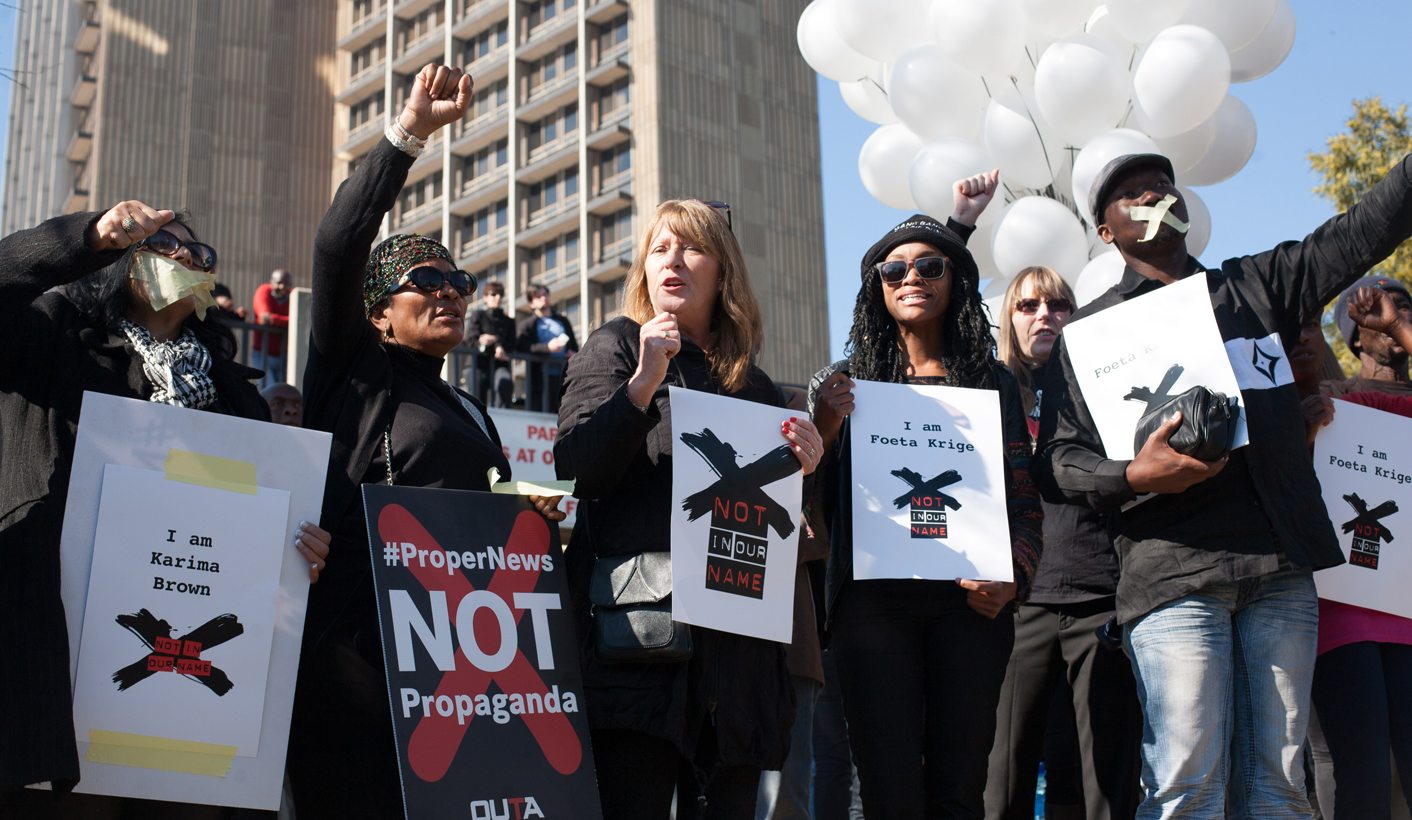 In protest terms, the demonstrations in Johannesburg and Cape Town on Friday against censorship by the SABC and the suspension of staff were small. But the media is a fractured industry that rarely speaks with a united voice. Friday was a rare sign of unity, showing how bad things have gotten at the SABC. By GREG NICOLSON.

The media is rarely good at expressing a unified voice and is worse at staging protests. Outside the SABC’s head office in Auckland Park, Johannesburg, on Friday, there were, at most, 100 people. At times, it had the feel of a reunion. The sharp line usually drawn between those covering an event and those participating in it was blurred as those behind the articles, the headlines, the cameras and the news bulletins were some of those holding placards and giving sound bites.

It was a middle-class affair, with strict adherence to the law, few theatrics, and far, far fewer people than political parties and unions are judged harshly for drawing out. But considering the competitiveness and divisions often present in the industry, and the media’s general reluctance to take to the streets – here, stances and unity are displayed in angles and column inches – Friday was significant.

Former Primedia head of news Yusuf Abramjee was vocal, as he often is, on the mic. But there were also editors and journalists from some of the country’s biggest publications. Outgoing City Press editor Ferial Haffajee, Sunday Times editor Bongani Siqoko, Independent Newspapers’ chief content officer Karima Brown, author and columnist Eusebius McKaiser, SAfm AM Live host Sakina Kamwendo, and Daily Vox managing editor Khadija Patel were there. So were working journalists from most platforms and publications in the country. Former minister Barbara Hogan, unionist Zwelinzima Vavi, Mark Heywood from the Treatment Action Campaign, general secretary Tuwani Gumani of the Media Workers Association of South Africa, as well as organisations like Right2Know, Amandla.Mobi and the Organisation Undoing Tax Abuse were also there.

Support from unions like the National Union of Metalworkers SA did not translate into numbers, but the array of media and civil society leaders uniting behind a common cause is rare.

Democratic Alliance MPs Phumzile van Damme and Makashule Gana were also at the Johannesburg march, but didn’t take the mic.

“We are here today to say no to Hlaudi… We are supporting the SABC journalists,” said Abramjee. SABC COO Hlaudi Motsoeneng has come under increased pressure this week after the resignation of acting SABC CEO Jimi Matthews who said there was a “corrosive atmosphere” at the public broadcaster.

Motsoeneng is known for making sudden changes to editorial policies and his decision not to broadcast violent images from protests has drawn harsh criticism. Last week, three SABC journalists were suspended for questioning a decision not to broadcast protests against censorship outside the SABC while another three were threatened with an intention to suspend for airing their concerns in a letter to the COO.

“His appointment is irregular. He should not be at the public broadcaster,” said Brown. Motsoeneng’s was found to have lied about his qualifications for the acting COO position and his permanent appointment by the communications minister was found to be irregular in court.

“Can you imagine what is happening inside to some of the people we are supporting?” asked the unionist Gumani. Allegedly, SABC staff were barred from taking part in the protests. Guwani said the issue is bigger than the suspensions or recent editorial changes. “It is a matter of public interest. It is for our children and our children’s children to be able to see themselves through the visuals of the SABC.”

In a lengthy speech, Vavi called Motsoeneng a “merciless dictator” and “the tsar”. He said the COO wasn’t appointed to “be our mommy” deciding on what we should and shouldn’t see. Vavi condemned the ANC leaders who have backed Motsoeneng and promised further action. “We shall not rest until he has walked out of this building.”

In Johannesburg, a small group closed the roads while marching to the Constitutional Court. Some marchers had tape covering their mouths, representing censorship. SABC economics editor Thandeka Gqubule, who was suspended last week, along with RSG executive producer Foeta Krige and Afrikaans news producer Suna Venter, was one of the leaders on the march, along with her colleagues, and spoke both outside the public broadcaster and court.

“Thank you for making the kind of news that will not make the evening news behind us,” Gqubule said outside the SABC. “It is no longer possible to practice our professional vocation here,” she said. “What is happening to journalists at the SABC is a microcosm of what is happening generally.” Referencing some of the country’s most revered past and present journalists, she said, “Don’t let the sun go down on us.”

Disciplinary proceedings against the SABC journalists have been postponed and discussions on editorial policy between the public broadcaster and leaders such as Vavi and Abramjee continued into Friday afternoon. While the journalists are considering approaching the courts, perhaps even applying for direct access to the Constitutional Court, legal action will be suspended until the finalisation of the disciplinary process.

Motsoeneng and the direction the of the SABC has support from both the communications minister and the ANC. While acknowledging management issues at the SABC must be attended to, ANC spokesperson Zizi Kodwa on Friday used Twitter to suggest there was a political agenda to capture the state broadcaster and that other media institutions and NGOs have failed to rally around issues of racism in the media and land reform.

Issues such as transformation in the media remains, of course, a key point dividing many media houses and journalists. It’s a main reason the media struggles to speak as an industry and with a common voice. Censorship and the unfair targeting of dissenting staff, however, were at the heart of Friday’s protests. Given the division in the industry, which Kodwa sought to heighten, it was unusual to see even the low numbers on the street. But those there spoke only of wanting more and better news, more information on the country, more discussions, without blanket censorship rules and an end to unfair suspensions and targeting of workers.

After seeing Motsoeneng’s ability to keep his position, and the ongoing bias in editorial decisions at the SABC, it seems nothing will change the public broadcaster’s trajectory, but the unusual group of united media stakeholders on Friday promised more action and Kodwa’s stance suggests the protests have touched a new studio. DM