TRAINSPOTTER: The murder of an Ordinary Member, the anointing of Thoko Didiza, and the battle for the soul of Tshwane 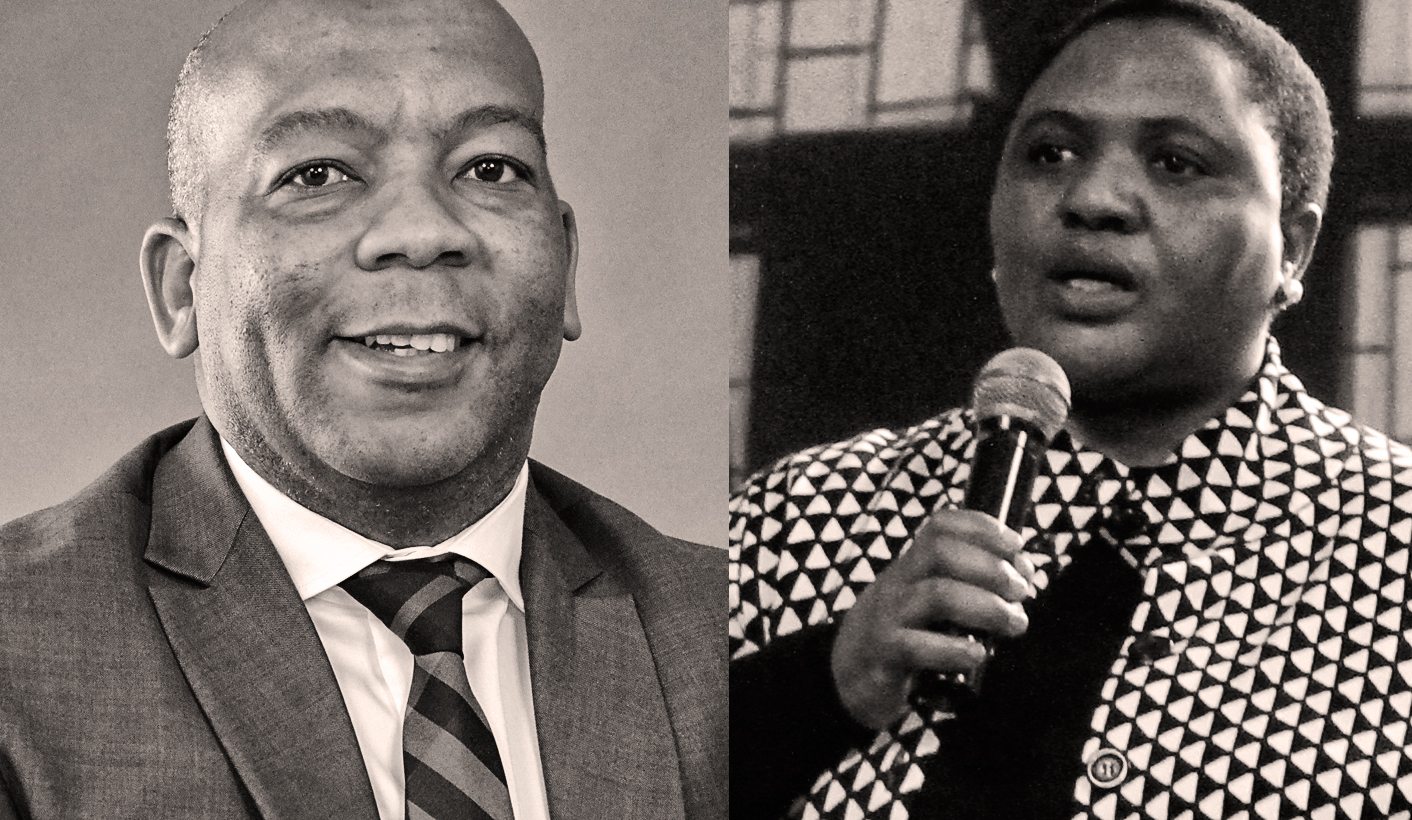 An ANC member is dead. There are violent protests in the townships. The announcement of parliamentary fly-in mayoral candidate named Thoko Didiza is to blame. This is how factional battles unfold. The ANC made this. No one is sure if they can unmake it. Welcome to Battleground Tshwane. By RICHARD POPLAK.

On Monday morning, in the middle of a local elections campaign, Nyalas and police cars and Metro cop motorcycles ringed the African National Congress’s Luthuli House headquarters. Replacing the usual level of paranoia was a tang of genuine fear, a sense of creeping terror, perhaps even the first tremors of self-loathing. The occasion was a press conference called to introduce the mayoral candidate who would replace Tshwane’s fashionably technocratic, factionally hamstrung Kgosientso “Sputla” Ramokgopa. Why the heavier than usual po-po presence? Another day on the campaign trail, another political murder. And this one, it appeared, had hit home.

Tshwane has become a trigger word in ANC circles. If you were hoping for a small-scale working model of the ANC’s death-tinged multiverse, why look any further than the war between Mayor Sputla and his deputy, Mapiti Matsena? Sputla has enjoyed five years with his face in the trough, insist his enemies. It is now their turn. Standard factional war, straight out of the cadre deployment playbook.

In order to properly (mis)manage the infighting, the ANC’s Provincial Executive Committee stepped in with the obvious backing of the party’s national structures. This past weekend was dominated by the ANC’s Big Mayoral Candidate Announcement-palooza — they called a photo-op and a press conference in order to introduce a list that replaced mayoral underperformers with future underperformers, while retaining the competent Parks Tau in Johannesburg and the celebrity fall guy Danny Jordaan in Nelson Mandela Bay. The list didn’t have any particular consistency, and nor did it have a candidate for Tshwane — an omission that basically ensured that someone in Pretoria was going to die.

Why the empty space, the lacuna, the non-candidate?

The story goes like this: ordinary branch members had handed over a list of three names to the Regional Executive Committee, which, in order to fulfil its constitutional obligations, duly handed the list over to the PEC. The committee perused the list, and found that Sputla’s name was noticeably absent, while deputy mayor Mapiti Matsena’s name was written in day-glo orange. (Not the day-glo orange part.) As for the other two members, the ANC was keeping shtum. Regardless, none of the names was acceptable, because signing off on the list would have meant entrenching the factional divide, resulting in the upgrade of a long simmering conflict into a full-blown nuclear war.

Time to sniff around for a parachute candidate. The name floating around Tshwane on Sunday belonged to a member of parliament named Thoko Didiza, a former Mbeki protégé turned Cabinet minister who submitted her resignation to the ANC’s new president in the fateful year of 2008. (See: battles, factional.) She nonetheless regained her parliamentarian job in 2014, was well liked, and had a general air of competence about her. According to the ANC, she even harboured vague ties to Tshwane, which is to say that she was born in Durban.

The notion of Didiza shifting resources out of the hands of those who had semi-patiently waited for them greatly displeased ordinary members of the regional structures, many of whom were gathered outside the Tshwane Events Centre on Sunday night. Shots were fired. Bullets hit male human beings. Several were injured, one “passed away”, to use the ANC’s euphemistic term for internecine murder. South Africa’s political violence could no longer be dismissed as a KwaZulu-Natal sideshow. What was a ruling party to do?

Call a press conference, of course.

As the ANC High Priests drifted into Monday morning’s Hell Presser, they looked sleep deprived and ashen and just reduced. These days, being a member of the ANC National Executive Committee does not appear to involve much fun. Sure, there are the tenders and the kickbacks, the cars and the cribs. But not all people are born murderously evil, and this maxim can even be extended to our ruling elite. Maybe I’m projecting, but the death in Tshwane seemed to have made an impression.

Deputy Secretary-General Jesse Duarte was handed the keys to the lectern. On her left sat Treasurer-General Zweli Mkhize, along with Gauteng baas Paul Mashatile and several other members of the provincial structures. (In ANC’s dog whistle press conference casting, the appearance of Mkhize implied Extreme Seriousness.) On the other side sat Sputla and his deputy mayor, closer than they needed to be — so close I thought they were going to start snapping selfies.

Duarte’s statement was terse, and summed up the internal reasoning that somehow promulgated Didiza as Tshwane mayoral candidate. “[She] is a senior and seasoned leader of our movement with extensive experience in governance,” intoned the dep sec gen, grimly. “Her nomination for mayoral candidacy demonstrates our commitment to strengthening the capacity of leadership at local government level across the board. We are confident that once elected by the people of Tshwane, she will continue to build on the solid foundation laid by Comrade Ramokgopa and his collective over the last five years.”

Perhaps. But more relevant to the statement than its contents was the fact that the head of the ANC Youth League Greater Tshwane Region had earlier called in to 702’s Redi Tlhabi show, proclaiming that there would be no acceptance of this candidate from afar. It was already clear, as we sat in Luthuli House like saps, listening to calmly worded media speakology, that the municipality was ripping itself to pieces.

Was this the new South African reality, the death of people in the service of politics? But that’s not quite right, is it? This wasn’t about ideology, about whether we should be left wing or right wing or no wing. It was about getting some. The nameless comrade was sacrificed so that someone could eat.

This was death in the service of kickbacks. And somehow, poor old Thoko Didiza was the fix for this nightmare. Turns out, cadre deployment has a bad side.

But this was not simply parachuting someone into the job, said Duarte. “To simply cast her away as a celebrity is to suggest she’s not competent. She is extremely competent. And that is why we thought of her.”

Her competence, sadly, is not at issue. Rather, it’s the processes under which she was chosen for the gig. The ANC tub-thumps its internal democratic processes, but the fact is that there are no internal democratic processes. “The Regional Executive Committee unanimously accepted this,” pronounced Duarte, bald faced. But what difference does that make when the ordinary members accepted nothing of the sort?

“The intensity of the competition in Tshwane is between two of the candidates leading the region,” said Duarte, in a rare moment of frankness, “and now they have to go to the ground and unite the region. The ANC condemns anybody who thinks violence is a means of furthering personal ambitions,” she continued. “We’re committed to peace, and were committed to letting people know that violence is not a solution.”

The ANC will prevail.

Will it? The Congress, after all, is not too big to fail. In fact, it’s just the right size. The promises implicit within the patronage system must at some point be fulfilled, or the whole thing caves in on itself. That’s exactly what is happening in Tshwane right now. Buses are burning in the townships. Tyres are on fire. Unfit-for-SABC footage is being beamed up into the nethersphere. Tshwane remains a centre of graft in which whispered sweet nothings haven’t been honoured, in which the unblessed are flipping cop cars over like upended turtles.

Welcome back, Thoko Didiza, if Tshwane really is your home. The weather’s great. It’s never dull. There is no “factionalism”, only “competition”. And Comrades are never murdered. They simply “pass away”. DM