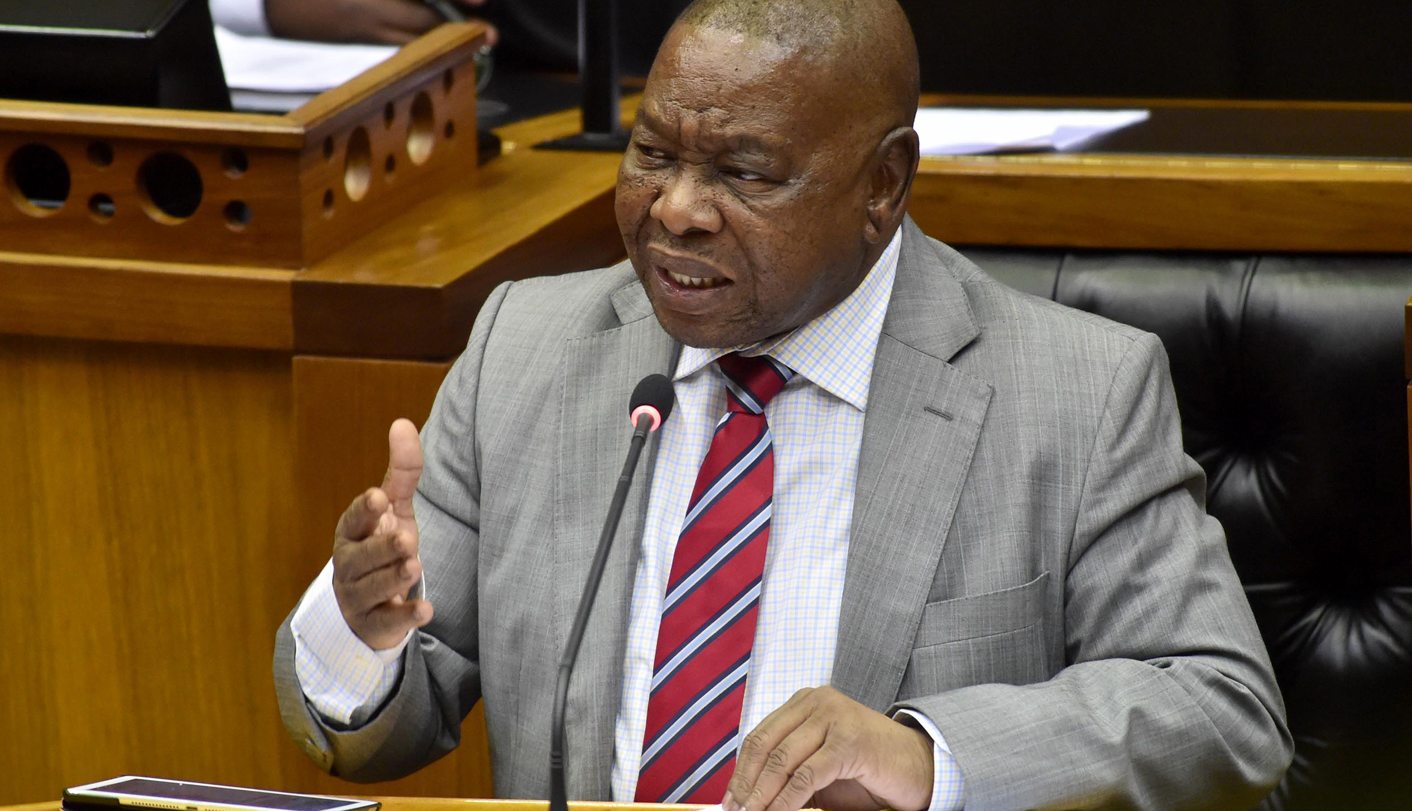 These turbulent days, the SACP is an interesting position. Often maligned for being all talk and no action, all Zuma and no critical thinking, all Marxist and no 21st century, it finds itself in a place in which it has no choice but to act. There are signs it is beginning to happen, becoming particularly critical of the ANC – or of Zuma’s leadership of it – and becoming more worried that the ANC as we know it could soon cease to exist if some practices and dynamics are not changed. Theirs would be an important, perhaps critical, intervention. By STEPHEN GROOTES.

If you hear the claim that the ANC needs to change the way it manages leadership transition, because it is at risk of imploding if it doesn’t, you would be forgiven for thinking it was some outside analyst, maybe someone with an axe to grind. But when that warning comes from the leader of the SACP, it is time for everyone to take notice.

In an interview with EWN broadcast on Friday morning, SACP general secretary (and Higher Education Minister) Blade Nzimande explained how, in the view of the SACP, there were now tremendous problems with the way the ANC chose leaders, and the way in which this process continues to damage the party.

“Each time this battle is over, you have a Cope, you have an EFF. For how long can we as a movement, the ANC, afford this breakaway?”

Then he explains exactly how worried he is:

“How do we know that next time around, it won’t be a breakaway but it won’t be an implosion of the organisation? So we are saying, as the SACP, we all have to sober up.”

It is important to note that Nzimande won’t be drawn on whether that means Cyril Ramaphosa and Nkosazana Dlamini-Zuma should join up on a single ticket, a notion bound to be flighted by someone serious in the next months. He also takes great care to not to be seen to be prescribing to the ANC. There is always that alliance protocol to observe.

But Nzimande does point to a historical precedent: In 1991, the ANC had its first elective conference since it was unbanned. While most of the positions weren’t contested (after all, who was going to put themselves ahead of Nelson Mandela?), there was contestation for the position of Deputy President. Chris Hani and Thabo Mbeki wanted the post. In the end, remembers Nzimande, Madiba went to them both and said that it was in the best interests of the movement that this contest be avoided for the moment (bear in mind, there was still the apartheid government to deal with) and so Walter Sisulu would be the guy.

Today, of course, is a very different time. Back then, Mandela could take the time to consult with other senior ANC leaders. There were greater levels of trust in the organisation than there are now. It could look like this is because of the personalities involved, but it’s actually for structural reasons.

Then, the ANC was far more homogenous than the multiclass organisation that it is these days. In those days it didn’t have provinces and regions, which subsequently introduced a whole new dynamic.

Nzimande is very much aware of this. He has plenty to say about provincial structures; he talks about the “building of very powerful provincial leadership collectives, that actually act to be the bargaining power to be who is leading on top, and so on”. He may be using big words, but he must surely mean those known as the Premier League. Even if he doesn’t, it is certainly true that in the ANC at the moment, if you lock up the support of some of the big provinces, you are home and dry in a leadership contest. Certainly, one can’t imagine President Jacob Zuma having had the power he has without the wholehearted support of KwaZulu-Natal over the last decade. And of course, it is entirely rational for provincial leaders to be aware of the power they have.

Nzimande is also worried about how this is now dove-tailing, slightly awfully, with filthy lucre. He says:

For those of a non-Marxist bent, it is always a pleasure to poke fun at the phrase “parasitic bourgeoisie”. It’s right up there with “lumpen proletariat”, meaning, generally, poor people. In this case, he means people who are close to crooks.

It is all a recipe for disaster: Someone with money finds an ambitious politician, gives that person money to advance, they advance, and that person with money gets to be first in line to make more money when the government contracts come. The result is people like John Block, now disgraced leader of the ANC in the Northern Cape, after being found guilty of corruption in a case relating to medical equipment.

No doubt, there will be those who will point not just to the provinces, but to Number One himself, for reasons that are too many to list here.

The question now, of course, is will anyone important listen to Nzimande? At the heart of this problem is the issue that has plagued the ANC since Polokwane. That was the first time anyone used “slates”, groups of leaders campaigning against other groups of leaders, for positions in the ANC. At the time, Thabo Mbeki had one slate, Zuma the other. That was in 2007. As early as 2010 both ANC Chairwoman Baleka Mbete and then ANC deputy leader Kgalema Motlanthe started warning about the damage this was causing to the ANC. Since then, many other major ANC conferences have opened with a similar admonishment from a national leader. And almost every major ANC conference has closed with an election of people from the same slate.

In one sense, the ANC’s failure, if it can be called that, is a failure of democracy. Often, successful democracies find ways to treat the loser decently, their rights are still protected, they can still campaign, they are able to try again; many a Democrat or Republican in the US who lose the race to the party’s nomination end up reinventing their careers as senators, members of congress or governors. The ANC has not been able to find a way to manage the loser.

Here, personalities do matter. Decisions need to be made about people who lose elections, and it should be relatively easy for them to be accommodated, in some way. That simply doesn’t happen. Zuma probably needs to take much of the blame for that. But he is certainly not alone; it could be argued that the real root of this, as with so much else, lies with Mbeki, and the “coup plot” of 2001. After people seen as rivals of Mbeki were drummed out of politics, the stakes became too high, and no one has been able to rein that problem in ever since.

Nzimande’s warnings, unfortunately, are likely to be ignored. Not because people in the ANC necessarily want to ignore him, but because they have no choice. If they are on the losing side of a leadership contest, there is no reason for them to think they will still have an important role to play. So they will fight, and fight hard. We see this at the national level, and we see it in the current violent, sometimes murderous, disputes over candidate lists at municipal level.

It is hard to see how this will end. Perhaps some kind of situation will develop that sees everyone indeed “sobering up”; perhaps Dlamini-Zuma and Ramaphosa will join forces. But an awful lot has to happen, because the only way this can be stopped is if the incentives of those in the provinces can be changed. When there is a huge incentive to use your political power for ill, and, in most provinces, a diminishingly small disincentive not to, the choice is not surprising at all. DM