Review: Noma – the bleak journey to the other Marikana 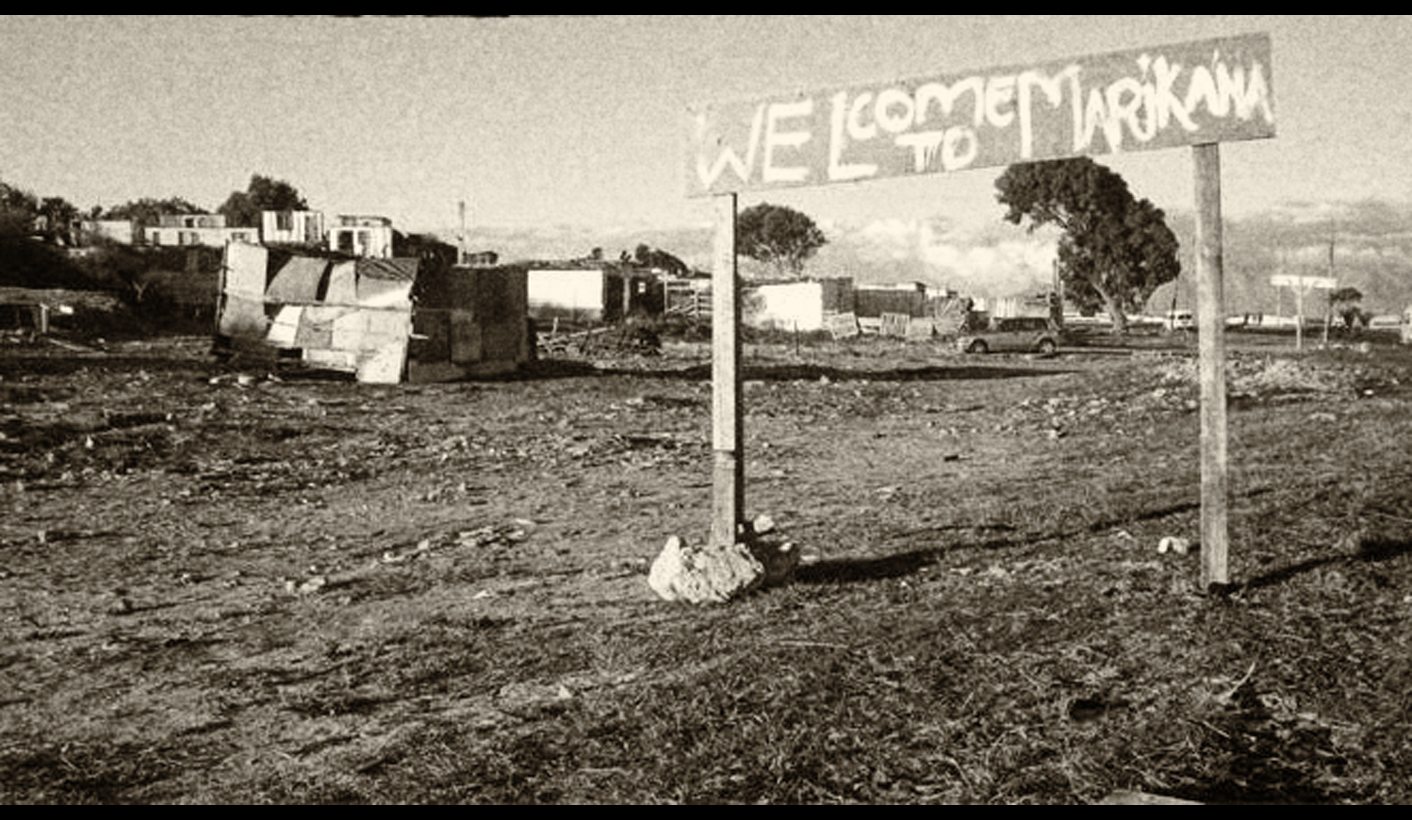 Opening at the Durban International Film Festival this week is a new documentary about the Marikana Settlement evictions in 2014. Noma follows a young, single mother of two along her journey to find a home for herself and her sons. By MARELISE VAN DER MERWE.

One of the early scenes of Noma, filmmaker Pablo Pinedo Bóveda’s latest documentary, shows a middle-aged woman protesting in the Marikana settlement, skirts swirling as she sings at the top of her lungs. At one point she pauses. “This reminds me of my youth,” she says.

As South Africa commemorates 40 years since 16 June 1976, it’s a poignant reminder that in some respects, the more things change, the more they stay the same. Later in the same film, schoolchildren who are rebuilding their families’ shacks after a demolition – not for the first time – worry because it’s late at night and they haven’t yet done their homework. Just finish putting up the walls, one says to the other.

That will take long, protests another. We need to do our schoolwork.

It’s not – like much of our country – an ideal environment for a child.

Noma follows the story of a young mother of two, Nomaliphathwe Gwele, who rents a shack that she shares with four other people: her sons, her cousin and her younger brother. She is a single mother; one of her sons is severely disabled, semi-paraplegic and completely blind. Noma has a job, but it’s essentially unskilled, low-paying, and later turns out to be something of a disadvantage when she can’t be home to protect her belongings from demolition and theft. But at the moment at least it puts food on the table. Her rent is too high, though. Like many “backyard dwellers”, she’s at the mercy of what’s available. She decides, with others in a similar situation, to dismantle her existing shack, buy some new building materials, and join the Marikana settlement dwellers in Philippi East.

This is where many South Africans will begin to recognise the story. Noma, one gets the impression, is possibly aimed at a foreign audience – there is some contextualising that is probably unnecessary for local viewers, and the Marikana evictions dominated local headlines for some time.

Noma somewhat wisely does not attempt an exhaustive analysis. Rather, it offers an empathetic glimpse into the life of one person with suggestions at the broader context. And the context is broad. The Western Cape (and the rest of the country) is facing a housing crisis – in terms of formal and informal housing. The province is growing quickly. Firstly it has the highest life expectancy for mothers and babies; second, StatsSA reported in 2013 that alongside Gauteng it was experiencing the largest inflow of migrants from other provinces. IOL previously reported that not much over two-thirds of the province’s residents were born there, and some areas of the Western Cape expanded by as much as 160%, largely due to an influx of jobseekers from the Eastern Cape. A large number of people in the Western Cape also live in informal housing, leading an Ohio State University study to probe what it called the “informal housing crisis” in Cape Town and further afield.

Those who are familiar with the Marikana evictions will recall the complexity of the issue: the enormous challenge facing the City of Cape Town in terms of providing housing for the rapidly expanding population; the fury at the brutality of the evictions; the back-and-forth regarding whether the City had a court order to evict the shack dwellers or not; the sheer horror of the human tragedy, in which people who had virtually nothing lost what little they had, but were desperate enough for security to start again from zero and risk the same over and over; the jubilation when the Wynberg Magistrate’s Court found in the Marikana residents’ favour, and the slow and sobering realisation that life would not be significantly better and the battle was not, in fact, won.

The strength of the film is not in relaying new information – it is a little scant on facts and data – but that hardly matters now that there have been so many fresh developments in the story. What it sets out to do, it does well. It builds a compelling, empathetic narrative and reminds the viewer of the human beings at the centre of a systemic disaster. Noma faces theft, crime, difficulties at work, and the challenges of being a single mother. A particularly terrible scene is the moment where she receives a text telling her that her house has been demolished and her belongings are gone. The shock registers on her face, but she has to keep working. There is nothing she can do.

She goes home, rebuilds her home with what she has. Shortly afterwards, she faces another demolition. This time with live ammunition.

The film is shot in black and white, which initially seems a little perplexing, but as one watches, one recognises more and more of the scenes as being reminiscent of apartheid-era footage and photography. The thematic link is already clear; the echoes in style and soundtrack reinforce it. Somehow, everyone comes off as a human being, including those performing the demolitions. Some are shown in all their cruelty, laughing and joking as they destroy the homes of others. Some seem defensive. Another clearly looks troubled. At one point, a resident pulls another away from a policeman and says: Leave him, he is a prisoner obeying orders.

Central to the story of Noma and her neighbours is the deep sense of betrayal expressed throughout. Over and over the question is asked: Where is the government that I voted for? Rage and disgust run deep, something worth noting in election season. Julius Malema in particular might grab his notepad right about now, because shortly after the first filmed eviction, the residents begin to argue. One berates the ANC for not being there. Another says No, this is not an ANC problem, it is a DA problem. Where is the DA? It seems the argument will become heated, until a voice says resignedly, It is all of them, nobody is looking after us.

As the second eviction comes, it delivers a crushing despair.

What will stay with you long after the end of this film is the knowledge that for the people in it, this illegal land grab, on what’s being used as a dumping site, is the best option they have. Facing demolition and the loss of everything she has, one resident tells the camera that life is much better now that she is no longer living with an abusive relative. “I am feeling nice now because I have got a house,” she says with a smile.

“I don’t know what will happen Monday. I am scared of Monday. But for now, I am feeling nice.” DM

‘Noma’ will premiere at the Durban International Film Festival which opens on 16 June.