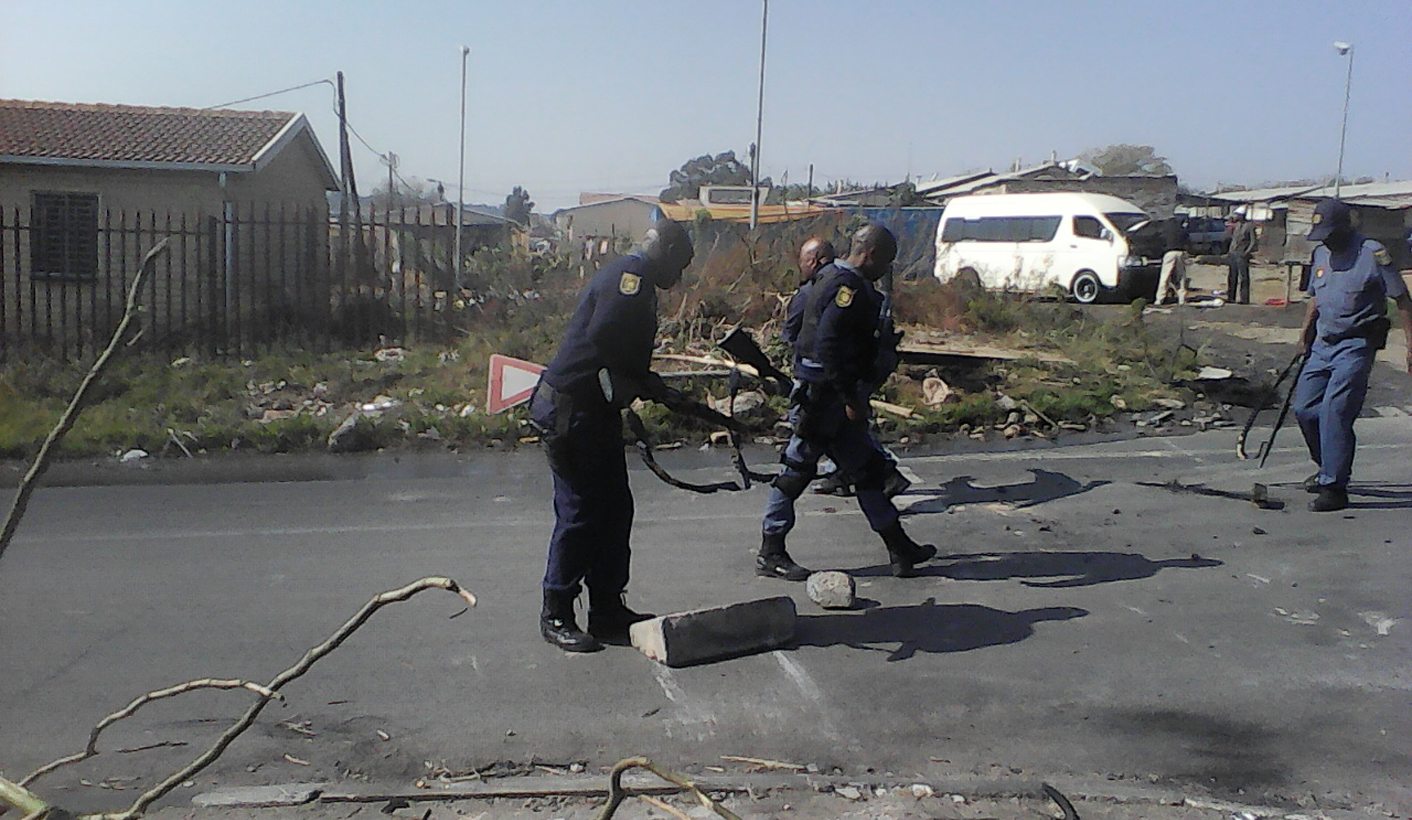 On Tuesday morning kids bore the brunt of South Africa’s political turmoil when about 24 of them collapsed after inhaling tear gas fumes during clashes between police and Diepkloof Hostel residents. By BHEKI C. SIMELANE.

On Tuesday, Diepkloof Hostel residents ran out of patience and took to the streets to express their dissatisfaction at the government’s ignorance of their service delivery grievances.

The protests were sparked by the housing department’s stalling on addressing housing and electricity issues. The department of housing provided residential units that were to be used by residents while the old hostel structures were demolished.

The department promised to bring more units but this never materialised. Residents who were lucky enough to receive the units, started selling electricity at prices ranging from R150 upwards, to the frustration of those who are still using the old hostel residences, are without electricity and to whom the price of paraffin had become a huge burden.

Police fired rubber bullets and tear gas at the strikers while they retaliated by throwing stones from inside the hostel. A little while later more police officers arrived. They showed a lot of enthusiasm and before everyone knew it, they were invading the hostel as they shot rubber bullets at strikers. Several people fell over one another as they ran for cover to evade rubber bullets. Police were made to work all morning, removing stones and tree trunks that were used to barricade the roads. No arrests had been made.

There was nothing to write home about from the protests by Diepkloof Hostel dwellers, just another service delivery protest, until a moment of sheer insanity when an officer’s gun fired a tear gas cylinder in the yard of a crèche while kids played.

Inside the yard, children collapsed after inhaling the tear gas fumes. Daily Maverick could not immediately ascertain whether all of the children were present when the incident occurred, but the number of children affected is presumed to be 24 as the crèche currently cares for that many kids.

The owner of the crèche, Bernard Mazibuko, intended to take the children straight to hospital but was bound by legal restrains and decided first to approach the local police station. The kids looked visibly shaken and scared as they huddled behind Mazibuko’s bakkie. They were terrified but bore no visible scars. It was only in the afternoon that Mazibuko managed to take them to the Koos Beukes Clinic near the Chris Hani Baragwanath Hospital. By late afternoon on Tuesday the children were still in the care of Mazibuko, who said he was waiting for their parents.

Unable to hold back her tears as she battled to narrate the incident, one of two elderly caregivers at the crèche, Sylvia Mafa, said she had never seen such recklessness in her decade-long service as an employee at the crèche. She said she did not know how to explain everything to the kids’ parents and that this would cast doubt upon their commitment to protect the kids at all times.

“They were out playing in the yard and by the time we realised what was happening to them, they had started collapsing, one after the other. We did not know what to do and gave them some water. I’m deeply hurt. What if any one of those children dies, what are we going to tell their parents?” Mafa said.

The youngest of the 24 children that the crèche cares for is seven months old, and was present when the incident occurred, while the eldest is a five-year-old.

“The incident has raised our blood pressure. We almost witnessed a disaster right on our doorstep. I just hope all the kids are fine,” Elina Mazibuko, also a caregiver at the crèche, said.

Zandile Mkhize, a single mother from Nquthu in KwaZulu-Natal, said it was time to stop voting for the ANC government because they were all about promises and lies. She said simple tasks such as cooking were a constant challenge, particularly with the price of paraffin, which now stands at R15 litre.

“All we ask for is that the government provides the rest of us with the residential units. Instead they send police to shoot us and our young and innocent kids. And yet we are still expected to vote for them. I’m not voting.”

The incident infuriated protesting hostel dwellers who vowed to open a negligence case against the police. They also accused the policeman who they said was responsible for fiddling with journalists’ pictures with a view to eliminating presumably incriminating material. Residents vowed to intensify the protests later on Tuesday when others returned from work. They also accused the police of victimisation and underhand tactics when dealing with some of them.

Mazibuko, the crèche owner, was equally shaken. He said he was still waiting for the kids’ parents.

“I did everything for those kids. I waited for the station commander to come as he had promised before I decided after a while that I should take the kids to the Koos Beukes Clinic near Bara, where they were given notes advising parents on how to handle symptoms of tear gas harm. I am now waiting for their parents to come. This has been a huge burden as I try to balance ensuring the kids’ health while exploring legal options to seek justice,” Mazibuko said.

Mxolisi Thusini, IFP chairman at the hostel, said the way the police handled the situation was reminiscent of the dark old days of apartheid. He said the housing department promised to meet them on 5 February to address their housing and electricity concerns but instead were met with rubber bullets. Thusini said even he was baffled as to why their genuine service delivery grievances had turned political.

Other residents sharply criticised the ANC for non-transparency in their dealings with the affairs of the hostel. Residents said the ANC needs to acknowledge that the hostel is an IFP stronghold and everybody knew that. They accused the ANC of failing to declare their leader(s) at the hostel.

“The ANC should accept that the hostel is controlled by the IFP and need to show respect when they engage us,” an elderly IFP resident at the hostel said.

It’s also greatly worrying to hostel dwellers that the area’s ANC councillor does not want to engage with residents except through a man known as Zwane and who is also a resident at the hostel. Livid residents stormed Zwane’s block to seek answers about his association and participation in hostel affairs but he was not there. Zwane allegedly fled after phoning the police to come and deal with strikers. DM