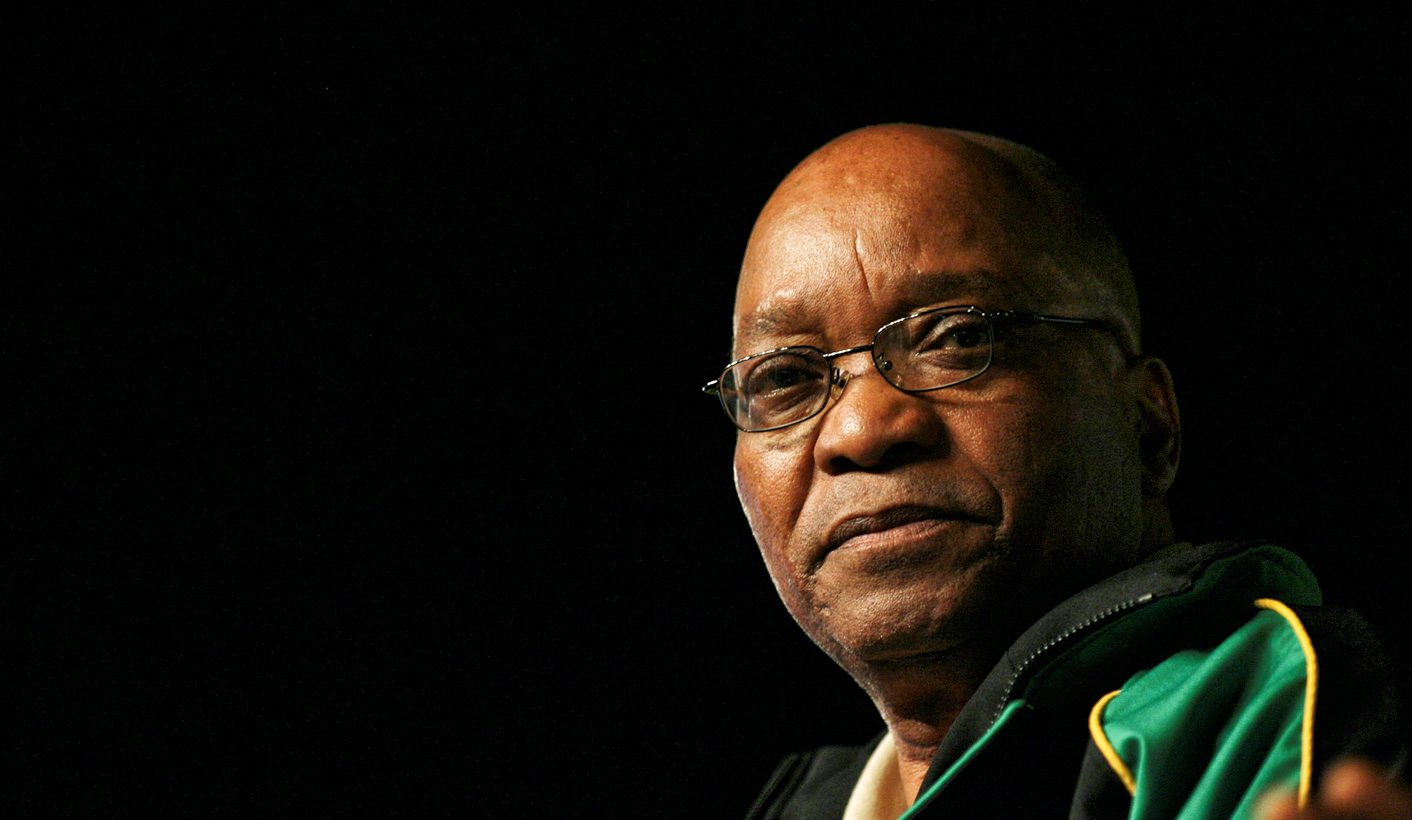 Another day of violence in South Africa’s Parliament, another session with President Jacob Zuma offering puzzling answers to questions on Nkandla. It could perhaps be just another day in paradise if you were deaf to the alarm bells being rung by Pravin Gordhan, Robert McBride, Anwa Dramat and Ivan Pillay about the menacing threat to our democracy. In a worrying statement, Gordhan appealed to South Africans to “protect” National Treasury staff. Meanwhile Economic Freedom Fighters (EFF) leader Julius Malema has warned there will be no peace until Zuma leaves office. By RANJENI MUNUSAMY.

As a large group of burly men who make up the parliamentary protection services filed into the National Assembly on Tuesday afternoon to muscle EFF members out of the House, another group of security officers stepped into the chamber to surround President Jacob Zuma. Although the president was not under any threat, a protection force assembled around him just in case. Again Zuma sat impassively, shielded by this group of armed men, as elected representatives were beaten and carried out of the chamber.

It is a sign of the times. Upheaval and violence, now the essence of South African life, while the elite remain cocooned. Zuma, in particular, remains fortified while the onslaught on democracy intensifies.

As fighting and scenes of pandemonium played out in the corridors, Zuma took to the podium chuckling. Once again he seemed unperturbed by the violence that occurred, even when a Democratic Alliance (DA) MP shouted at him, “This happened because of you!”

There was a time after the Constitutional Court delivered judgment on the Nkandla matter when Zuma seemed to be on the back foot. He appeared under pressure from the chorus of voices speaking out against his violation of the Constitution and calling for him to step down.

But Zuma has clearly bounced back. When asked by DA leader Mmusi Maimane to provide proof of his bond for the Nkandla homestead, Zuma was back in performance mode, explaining that he had done nothing wrong and that he and his family paid for the buildings. He told MPs to “just keep quiet and listen”, saying the only problems identified by the public protector were the five non-security features.

“These items, they represent the kraal‚ fowl run‚ swimming pool … um‚ yebo … fire pool, yes fire pool‚ and a waiting room and the amphitheatre. Five. They are not talking about a house that people live in with bedrooms and living rooms,” Zuma said.

When asked by DA MP James Selfe what collateral he had used to get a bond, Zuma said he used a “PTO” (Permission to Occupy). It is not clear how a lease agreement was used as surety to get a bond.

Zuma regained his political footing in the ANC on the basis of the “apology” he offered the nation following the Constitutional Court judgment on Nkandla. Judging by what he said in Parliament on Tuesday, Zuma is still not apologetic about the Nkandla fiasco or the amount of taxpayers’ money blown on his personal home.

And when asked about the dodgy dealings of his friends, the Guptas, Zuma was even more dismissive. “I know nothing about the business dealings of the Guptas. Why should I have a view?” he asked.

While Zuma is back in top form, seemingly impervious to the turmoil around him, the strain on Finance Minister Pravin Gordhan is intensifying. Gordhan issued a statement on Tuesday evening saying media reports about the Hawks’ plans to arrest him had been “extremely distressing for my family and me”.

“I cannot believe that I am being investigated and could possibly be charged for something I am completely innocent of. I have answered the questions submitted by the Hawks, and have not heard from them,” Gordhan said. “It is indeed true that no one is above the law. But no one should be subjected to the manipulation of the law and agencies for ulterior motives.”

The emotional toll on Gordhan was evident: “Throughout my 45 years of activism, I have worked for the advancement of the ANC, our Constitution and our democratic government. I would never have thought that individuals within the very agencies of this government would now conspire to intimidate and harass me and my family.”

He said his lawyers would be approaching the Hawks and the National Prosecuting Authority for further information and clarity about the case against him.

“The malicious rumours and accusations about ‘espionage’ activities are false and manufactured for other motives,” Gordhan said.

He also referred to a Daily Maverick report that one of the Gupta brothers had revealed at a business meeting that Gordhan was to be arrested and replaced as finance minister.

“There have also been reports of businesspeople claiming inside knowledge of or influence over state institutions. If such reports are true, that alleged conduct will undermine the integrity and honesty within the Treasury or other key institutions,” Gordhan said.

He issued a dire warning about the “unrestrained attack on honest and hardworking people and the institutions meant to strengthen our democracy.

“Millions of people will pay the price (there will be less money to relieve poverty and support job creation programmes) if this subversion of democracy is left unrestrained and unchallenged,” Gordhan said.

In the most revealing statement about the onslaught against his department, Gordhan said:

“I appeal to all South Africans to protect the National Treasury staff, who have diligently, honestly and skilfully served the national interest to the best of their ability.”

A strong declaration of support came from his former comrades Robert McBride, Anwa Dramat and Ivan Pillay. In a detailed statement on the attack against state institutions, McBride, Dramat and Pillay said there appeared to be a pattern in which government officials are removed from their positions using baseless allegations, media leaks and investigations against them.

“It appears that the pattern of questionable processes has also been applied to the recent interactions of the Hawks with the Minister of Finance,” they said.

“Corruption is the biggest threat to our constitutional democracy. This cancer has turned former comrades against each other. People who shared the same trenches in the fight for liberation are now at each other’s throats for the sake of protecting corrupt activities,” McBride, Dramat and Pillay said.

“We will continue to use our experience and expertise to investigate, fight and expose corrupt activities in the private and public sector.”

They too made a public appeal:

“We call on those in business, civil society, organised labour, NGOs and the general public who value and want to defend our constitutional democracy, to assist our efforts with legal advice and expertise and legal and financial resources.”

EFF leader Julius Malema is signalling a different method to defend South Africa’s democracy. Speaking outside Parliament after being forcibly ejected and violent bouts with parliamentary security, an enraged Malema said Zuma should never see peace for the remainder of his term.

“Zuma is not our president. The day he breached the Constitution, that’s the day he kissed the office of president goodbye… The only thing that will bring peace here is when Zuma resigns as a sign of respect to Constitutional Court and Constitution‚” Malema said.

He said Zuma should not be allowed to address Parliament because he had broken his oath of office.

“You will thank us once we restore the dignity of this Parliament by removing Zuma,” Malema said. “These bouncers must know that if they bring violence‚ we will respond with violence. We are not scared… Anyone who manhandles us must know we have got the same capacity. No one has monopoly on violence.”

In a time of social and economic turmoil, where schools are burnt down by angry communities and violence has become routine in the House of Parliament, the warning lights are flashing about the state of our nation. Gordhan’s warning should not be treated lightly: if the subversion of our democracy is left “unrestrained and unchallenged”, millions will indeed pay the price.

This is no longer about the individuals caught in the vortex; it is about rescuing our nation before it becomes yet another tragic story on a continent constantly being destroyed and reborn. Our rebirth too is possible and hopefully it will come before so much more is destroyed. DM