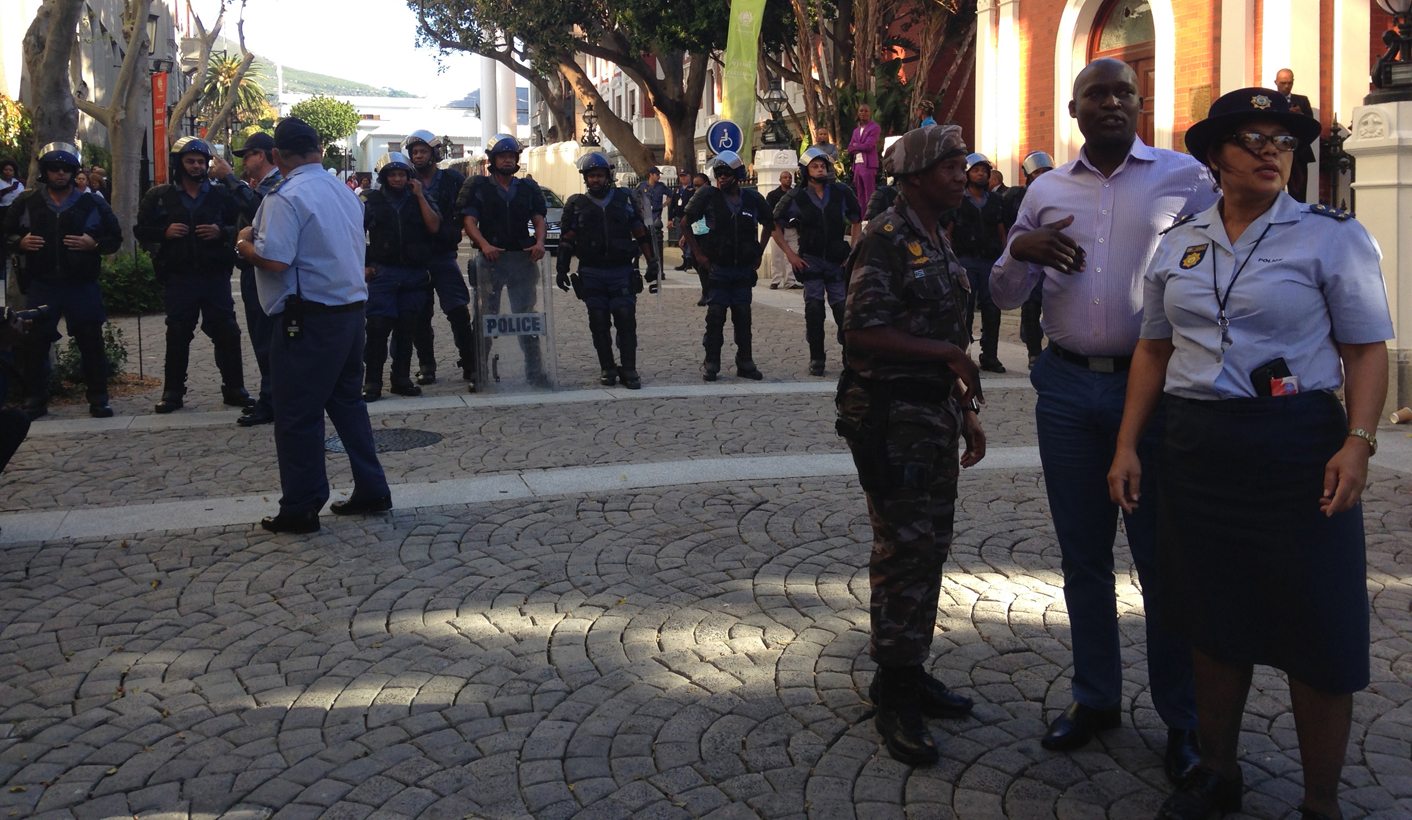 It was one of the harsher encounters in the National Assembly, which has seen repeated chaotic scenes over the past year-and-a-half. After about 17 minutes of Economic Freedom Fighters (EFF) MPs raising points of order and objections to President Jacob Zuma speaking in the House, they were forcibly removed. The parliamentary protection service, dubbed “bouncers”, pushed, shoved and manhandled MPs, who made use of hard hats while water bottles flew. One EFF MP, not named, who was ordered out by Speaker Baleka Mbete was later given the option of staying. EFF MP Reneiloe Mashabela decided to leave, saying she did “not want to listen to a thief”. By MARIANNE MERTEN.

The ugly scenes in Parliament did not halt the presidential question session; it continued after a short suspension as if nothing had happened. Outside, however, there was a stand-off.

The glass doors to the Poorthuis entrance to Parliament had been closed to the EFF MPs and the small group of supporters, who had been sitting in the public gallery. Tempers reached boiling point, and the glass doors were repeatedly hit at until they cracked. Two ministerial bodyguards rushed through to close the heavy wooden doors. A uniformed officer was overheard on his cellphone calling in the riot police, officially known as the public order police.

The riot police arrived and formed a line near the damage as EFF leader Julius Malema was addressing supporters and journalists.

“Zuma will never find peace in this Parliament,” Malema said. The president had broken his oath of office, and could not be respected, in the wake of the Constitutional Court judgment on Nkandla.

“Zuma is not a legitimate president of the Republic of South Africa. We cannot be led by a man who failed to uphold, defend and protect the Constitution. It will never happen, not on our watch, not in our name.”

Malema and the EFF are set to be suspended for more than five days, in keeping with parliamentary rules, effectively taking them out of the remainder of the parliamentary programme due to end next week. But Malema said the EFF programme would continue when they come back.

The bruising scenes unfolded a day after the EFF unsuccessfully turned to court to interdict Parliament from calling in its protection services. Earlier this month, during the presidency budget debate, the EFF was removed from the House after raising points of order over Zuma’s presence.

Replying to the debate the next day, Zuma said Mbete had handled the situation well, but appeared to address the Speaker directly, adding: “I believe your House needs to do more to bring this House into order…”

After the EFF MPs were removed, United Democratic Movement (UDM) MP Mncedisi Filtane appealed to Mbete: “Parliament has to find a better way of handling this situation.”

Then DA Chief Whip, John Steenhuisen, complained that four months after the new recruits were drafted into the parliamentary protection services, they were still not identifiable. None of those who manhandled the EFF MPs out of the House were wearing uniforms or nametags.

“I’m appalled,” he said, adding that the Secretary to Parliament seemed “to be sitting on his hands”.

Mbete promised she would personally take this up, and announced the start of the business of the day – questions to the president. As has become the norm, there were presidential giggles, and much disgruntlement on opposition benches, where MPs felt questions were not answered.

Mbete took the line she previously did: the president has answered, an MP may not like the answer, but it has been given.

Outside, police kept watch on the singing group of EFF supporters, but it soon came to an end as people left the parliamentary precinct.

It was just another day in Parliament. DM