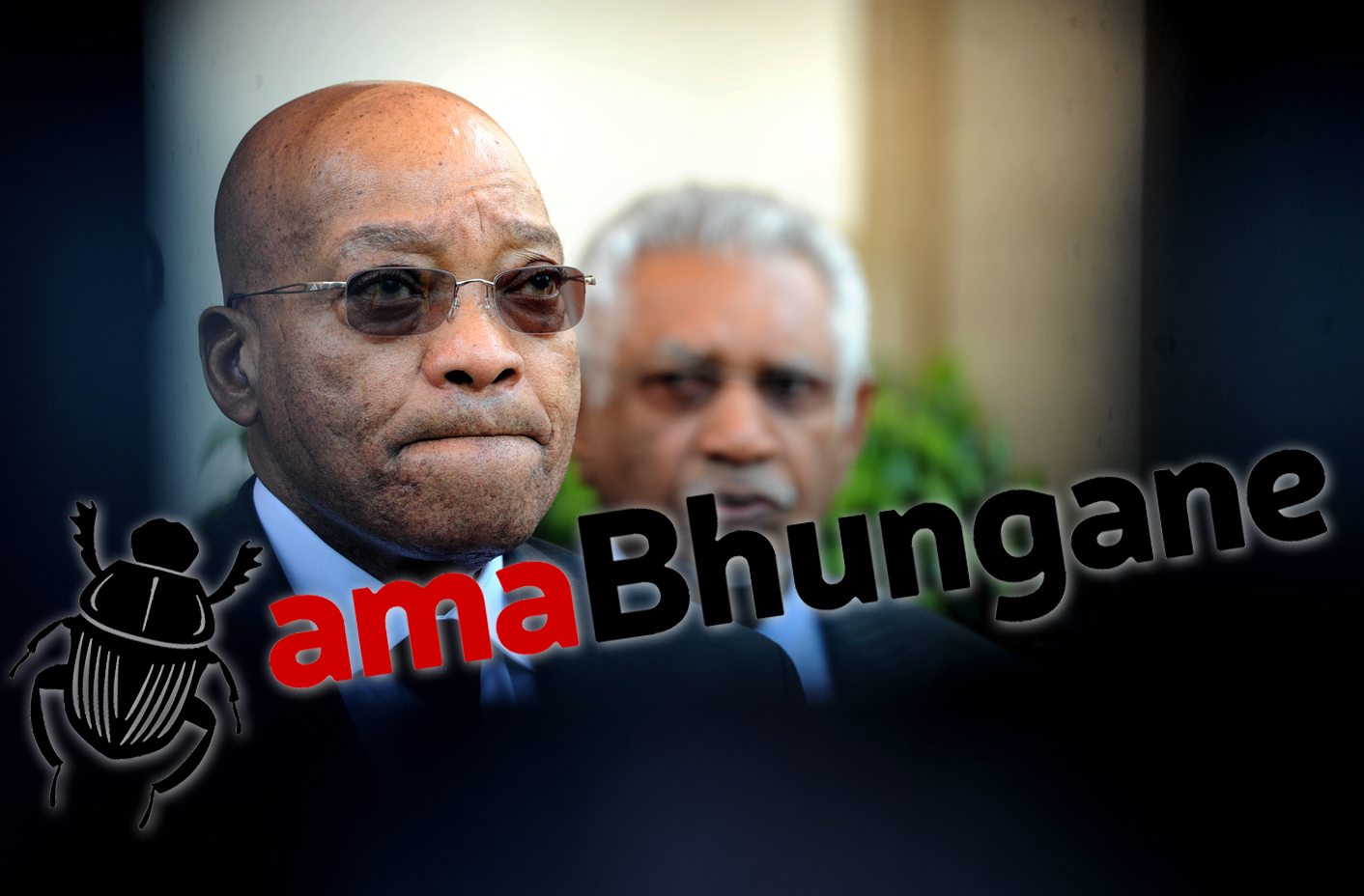 Every time anyone even vaguely associated with the government goes inside a courtroom, or a near a courtroom, or so much as mentions the word “courtroom”, the legal equivalent of midgets getting shot out of a cannon ensues. How many times are we supposed to watch high-ranking ANC members, or the sleazebags they cover for, humiliated by someone wearing a robe? Soon, we shall be forced to etch the following onto Luthuli House’s coat of arms: We fought the law, and the law won. By RICHARD POPLAK.

They lose. Every. Single. Time.

Last Thursday, buried under the leak of Mabel Jansen’s sweeping Facebook judgment regarding the sexual proclivities of black men, the amaBhungane Centre for Investigative Journalism earned themselves two – count them, two – wins for press freedom and the public interest.

How is that even possible? It turns out that 22 years of power breeds a certain arrogance, and such arrogance often finds itself in conflict to what is actually, like, the law.

For the uninitiated, amaBunghane is “an independent non-profit founded to develop investigative journalism in the public interest”. The outfit has broken some of the biggest stories in the history of South African newsprint, and while its work was until recently published by the Mail&Guardian, it has now branched out in the manner of the American investigative giant ProPublica. (Yes, amaB have published on Daily Maverick. No, I’ve never written for them.) Their mandate includes “[helping to] secure the information rights investigative journalists need to do their work”, which in this country means their journos are often pictured walking into courtrooms carrying notebooks and wearing hardcore spectacles.

By any measure, last Thursday’s twin wins were a watershed for press rights in this benighted place. In the manner of a UFC tournament, please consider the play-by-play of the two rock-‘em sock-‘em bouts, both of which ended for the bad guys (spoiler alert!) with a roundhouse kick to the nuts.

Back in 2011, former Bullshitter-in-Chief Mac Maharaj starred in a number of amaBhungane investigations, but perhaps the most contentious regarded his messy involvement with Zuma’s one-time BFF Schabir Schaik and the infamous French arms company Thomson CSF. Did Mac dip his oily fingers into the arms deal cash when he headed up the transport ministry back in the mid-90s? Knowing Mac and his taste for life’s finer things, the question wasn’t such a stretch. The late, not-so-lamented Scorpions, which functioned at the time as the National Prosecuting Authority’s (NPA) investigative arm, sat Mac down for what is known in the local argot as a section 28 interview.

The framers of the National Prosecuting Authority Act devised section 28 as a way of providing witnesses with a form of immunity even if they were legally compelled to talk; the act forbade the NPA from burying Mac under his own words legally demanding his honesty. Lawyers call this holding the testimony in camera.

In 2011, amaBhungane got their hands on Mac’s deposition, and had cause to believe that the Bullshitter-in-Chief had been less than forthcoming – and was thus subject to a decade or so of jail time. After the M&G’s editor was threatened with a 15-year, all-expenses-paid involuntary holiday of his own, the paper published a massively redacted version of the Maharaj blab-fest.

Deuce, as it were.

Did the public not deserve to know that a prominent ANC player had lied to the NPA? AmaBhungane certainly thought so, and asked as much of advocate Nomgcobo Jiba, the former acting National Director of Public Prosecutions (NDPP). She said, Nah. Thus AmaBhungane and the Mail & Guardian trotted off to the North Gauteng High Court to have her application reviewed.

Meanwhile, in a fit of rage, Mac Maharaj threw sizeable Swarovski tchotchkes at his Mercedes AMG while screaming at his lawyers on a diamond encrusted mobile phone. (I made that up, I think.) He filed criminal charges against amaBhungane’s managing directors, Sam Sole and Stefaans Brümmer, and former M&G editor, Nic Dawes, because he insisted they had come by his testimony illegally. To which they disagreed.

But last Thursday, the deadlock was broken. Judge Cynthia Pretorius threw out both Mac’s application and Jiba’s decision, while granting amaBhungane and the M&G the right to publish the testimony. The judge said some stirring things about the public interest, which apparently passed over the head of Mac and his lawyers, who asked for a leave of appeal.

It was a straight up mauling. Could the day get any worse for officialdom’s cage fighters?

The next bout wasn’t properly an amaBhungane battle; the win must be properly credited to a Moneyweb journalist named Julius Cobbett. Nonetheless, the investigative unit signed on as amicus curiae, and pitched in on what will be remembered as another precedent-setting smackdown.

In 2013, Cobbett was on the trail of a company called Nova Property Group. He figured that the company, along with related outfits Frontier Asset Management and Centro Property Group, were involved in an investment scam, and he filed an application to review their share registers under Section 26(2) of the Companies Act. Not so long ago shareholder registers were public documents; South Africa’s current government, nothing if not the handmaidens of business scammers, in 2009 pared down the law with something called the new Companies Act 2.

Over the course of a review of the Companies Act 2 between 2009 and 2011, AmaB was instrumental in paring back the paring back, and the restrictions on accessing the registers – a critical means of maintaining some form of transparency in the corporate sector – were lessened. Nova and its partners in slime didn’t get the memo, and refused to hand over the necessities to Cobbett and Moneyweb. And so the journalist made an application in the North Gauteng High Court, and the usual nonsense ensued.

In 2014, Cobbett and Moneyweb won an interlocutory judgment, but the High Court mangled its interpretation of Section 26, and Nova and Friends appealed. Last Thursday, however, the Supreme Court of Appeal tossed out their objections. In doing so, the court clarified the point of Section 26(2), which is to allow the public a small but vital window into the construction of the corporations that so impact our lives. As acting Judge of Appeal Fayeeza Kathree-Setiloane wrote in her summary statement, had Nova gotten its way, such an outcome “would have a negative impact on openness and transparency, and would directly undermine the work of Moneyweb, amaBhungane and other investigative journalists, as it limits the right to freedom of expression. Preventing the press from reporting fully and accurately does not only violate the rights of the journalist, but it also violates the rights of all the people who rely on the media to provide them with ‘information and ideas’.”

Another precedent-setting moment for media freedom; another example of how scrambled the relationship between power and law has become in this country. Without independent judges who don’t post their lunatic musings of Facebook…now there’s a sentence not worth finishing.

Vigilance. That is what is required of us. Let our guard down for just a moment, and they – by which I mean the government and the corporations they shill for – will take you for everything you’re worth. So raise a glass to amaBhungane, the M&G, Julius Cobbett and Moneyweb.

They wear the hardcore spectacles so you don’t have to. DM

Photo: President Jacob Zuma is seen during a meeting with members of the SA Editors’ Forum at the presidential guesthouse in Pretoria on Friday, 20 February 2015. In the background is presidential spokesperson Mac Maharaj. Zuma assured editors that the jamming of cellphone networks in Parliament will not happen again. Picture: Werner Beukes/SAPA