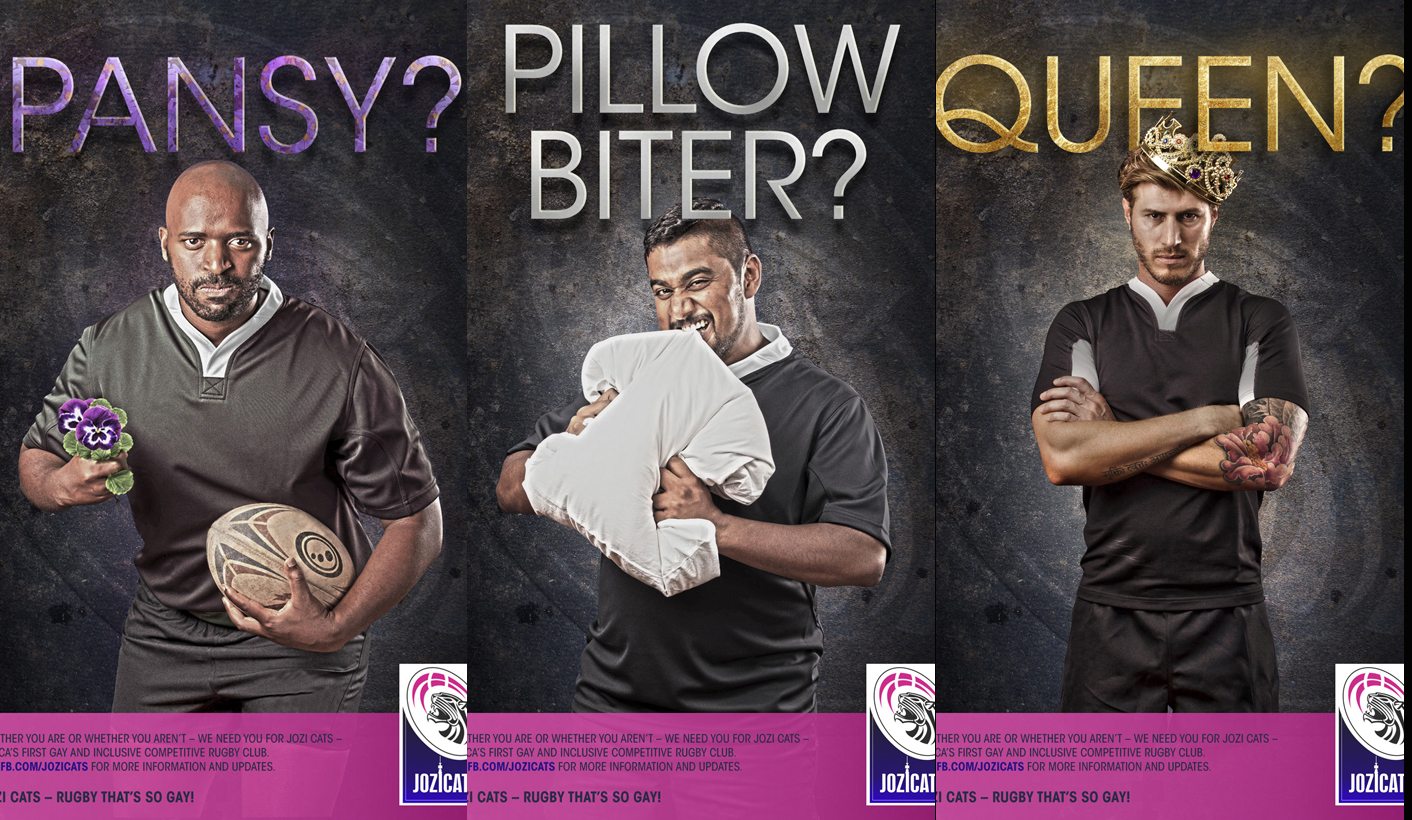 Last week, the Jozi Cats, Africa’s first gay and inclusive rugby club, launched a provocative recruitment campaign that made headlines across the world. The campaign has started a critical conversation that is long overdue in South Africa and the rest of the continent and their journey could play a critical role in attitudes towards homosexuality in sport. By ANTOINETTE MULLER.

Last year, a column was run on these pages pondering whether South Africa is ready for a Springbok player to come out as gay. It was written after South African rugby player Jacques Potgieter was fined for a derogatory slur aimed at two Brumbies players. Last week, Jozi Cats, Africa’s first and inclusive rugby club, launched a provocative campaign aimed at taking those slurs and sticking two fingers up at them in a recruitment drive.

The campaign garnered publicity from all over the world, something that took everyone involved by surprise.

“We are a small club with no budget, so we thought we’d launch a recruitment campaign that might get picked up by a few local publications, especially in the LBGTQI community. We’ve been floored by the response,” club chairman and Jozi Cats player Teveshan Kuni told Daily Maverick.

While the campaign might have been widely praised, there is a deeper issue that prompts some concern. Why is there even a need for a club like this in the country?

“The truth of the matter is that many of our players don’t feel like they can be openly gay and be a rugby player in South Africa,” says Kuni. “So we started Jozi Cats as where they could be both. The club is somewhere that players can play social and competitive rugby in a safe and non-judgmental environment.”

Prejudice remains deeply embedded in many South Africans and you only had to glance at some of the comments on the posters that were shared by some publications to understand that homophobia is a problem that we’re simply not going to solve overnight.

But it’s not just in South Africa where the issue of prejudice persists. In June the UK Independent published an article about an anonymous gay footballer, which painted a pretty grim picture for acceptance in the sporting world in Germany. The anonymous player said he felt increasingly alienated after revealing his sexuality.

Rhyian Anderson-Morley, an Aussie Rules player, revealed in a column in 2014 that his sexuality nearly forced him to give up because he felt so shackled by what he might be perceived to be like. He eventually came out publicly in a column for The Age Newspaper and says he’s training better than ever.

Attitudes towards homosexuality vary greatly from country to country and things are pretty tough in Africa with 38 countries criminalising homosexuality. South Africa has been one of the most progressive countries on the continent and, in a way, in the world, but homophobia has by no means away.

An Afrobarometer survey recently found that 23% of South Africans “aren’t tolerant” of homosexuals. While South Africa was the second most tolerant of all countries surveyed and expressed tolerance levels significantly higher than the 79% across the continent, corrective rape of women and hate crimes against men, especially in rural communities, are deeply troubling issues which we have not even begun to tackle adequately.

Then there is the sporting culture in South Africa which is often dominated by outdated “macho” and “jock” attitudes. This hostile environment makes it no wonder that South Africa has not had a publicly gay sportsman. Kuni, though, is hopeful that when that day comes that a sportsman is comfortable enough with coming out, it will not be an issue.

“I think if you look at other players who have come out, then yes, definitely we’re ready for a gay Springbok. Because it’s all about skill and that’s what it’s always been about, we want players to be appreciated for their skill and not be defined by their sexuality,” Kuni says.

If the Jozi Cats have their way, that player might even come from their club. They have partnered with the Wanderers Rugby Club which allows them access to some great facilities and the potential for talented players to make the step up to the Golden Lions.

While we all like to think that we’ve reached a stage where somebody’s sexuality is met with “so what of it”? the importance of gay role models should not be underestimated. In a society that often still condemns homosexuality as “abnormal”, identifying with high profile people who are gay can have a massive impact. This representation can not only help people understand that homosexuality is certainly not “abnormal”, but it is also critical for young men who might be battling with questions over their sexuality and living in fear of expressing themselves because of condemnation from their communities.

The poignant campaign also helps to smash perceptions that gay men fit a certain stereotype which has been formed by society, which is why it was so crucial to use players from the club in the poster campaign.

“Over and above everything else we wanted to show that these are just ordinary guys who love playing rugby and who happen to be gay,” Kuni says.

The club is about more than just smashing stereotypes, though. You don’t have to be gay to play for them. In fact, you don’t even have to have played rugby before to sign up.

“We’re one of the few rugby clubs who teach adults to play rugby. in this country if you haven’t played by high school you’ve missed the boat, but we welcome everyone and will teach everyone from scratch,” Kuni explains.

The club is acutely aware that not everyone is ready to come out to the world yet and all they want to do is foster a safe environment for people of all sexualities. But it has big dreams, too. The clubs is firmly focused on representing South Africa at global Gay Rugby level and even the Gay Games.

These milestones will be critical in the club’s evolution. The poster campaign has started a crucial conversation that is long overdue in this country and across the rest of the continent. If they can rise to prominence, that conversation will continue and could very well change the lives of many young people who do not feel safe when simply being themselves. DM