Playing the enemy: Understanding the ‘hit’ against Madonsela 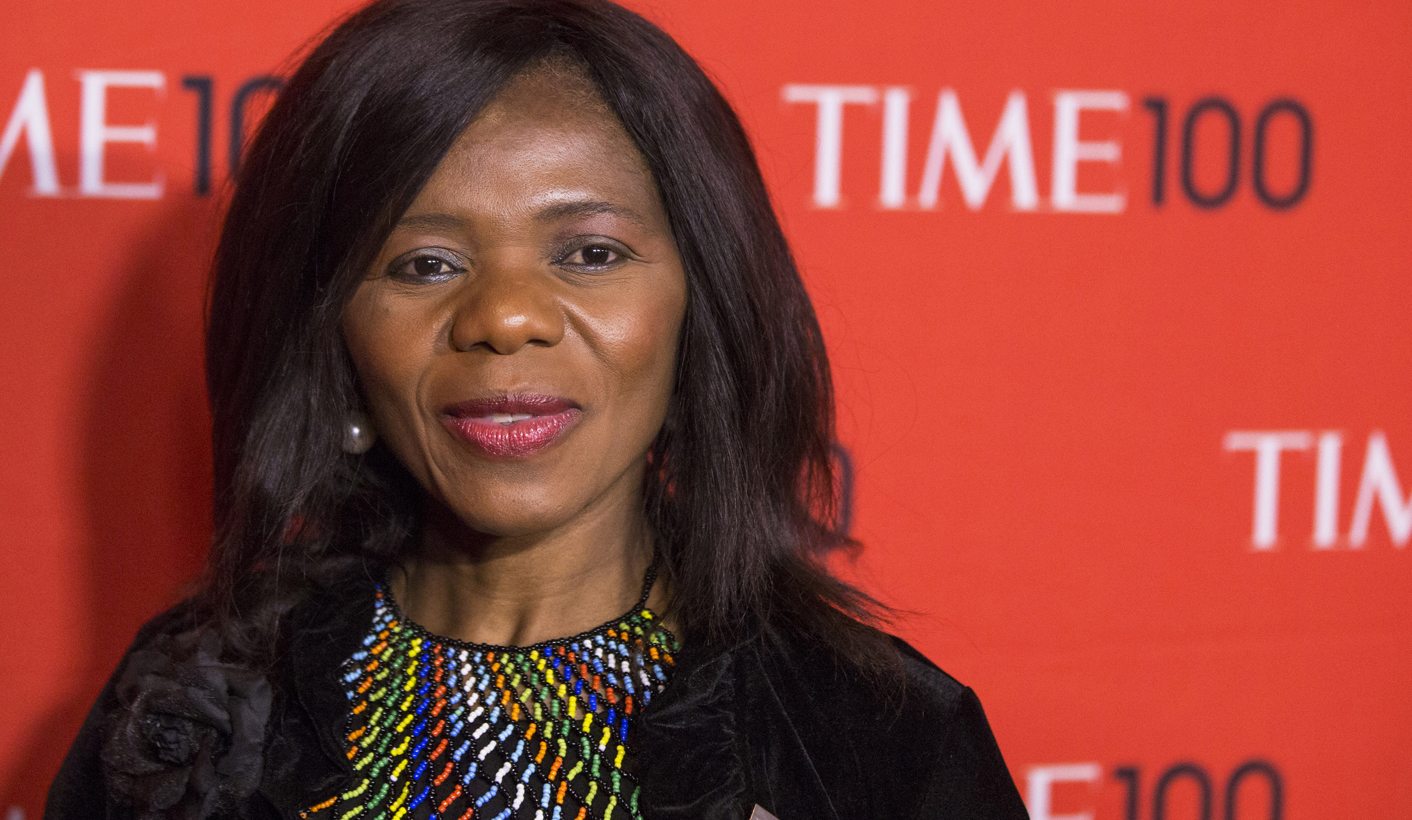 If someone really did pay a contract killer to take out Thuli Madonsela, they must be quite annoyed that the plot has been exposed before the job was done and that the revelation led to even more hero-worshipping of the public protector. It seems Madonsela’s superhero status rockets every time her detractors try to diminish her. The story of a professional hit on Madonsela is being questioned in some quarters as it makes no sense to kill her five months before she leaves office. But those who have much to hide could be threatened by what Madonsela could do as her last hoorah. By RANJENI MUNUSAMY.

When you think about why anyone would want to kill Public Protector Thuli Madonsela, there is only one case that springs to mind: Nkandla. Out of the thousands of cases that passed through the Office of the Public Protector, the investigation into the security upgrades at President Jacob Zuma’s private home defined Madonsela as the fearless corruption-buster who took on the most powerful person in the country, and won.

The public protector’s investigation of Nkandla irritated people in the ANC and government from the moment she took it on. Attempts by security cluster ministers to intimidate Madonsela and get her to back down on the investigation only seemed to strengthen her resolve to see it through. Leaks of the draft report led to her being slammed by ANC Secretary-General Gwede Mantashe and his deputy Jessie Duarte, and her motives questioned.

Still, Madonsela remained focused on completing her report and maintaining the integrity of the investigation. When she released the Nkandla report, there was a significant police presence around her office, including nyalas stationed in the parking lot. It was not clear what possible security threat there could have been in Madonsela announcing her report to a big group of journalists but such police operations are never questioned or explained to the public.

The “Secure in Comfort” report was of course a bombshell, finding that Zuma violated the Executive Ethics Code by failing to protect state resources and that he benefitted improperly from the nonsecurity upgrades. The biggest point of contestation was that the president should pay back a reasonable percentage of the cost of the nonsecurity upgrades to the state.

Subsequent to the release of the report, Madonsela endured all manner of attacks to her person, her office and even on the basis of her appearance. ANC Members of Parliament (MPs) belittled and attacked her and would not allow her to explain her findings to them. The Deputy Minister of Defence, Kebby Maphatsoe, accused her of being a CIA spy and she was constantly derided for being a media star and playing to the public gallery. Madonsela also faced an uphill battle to secure the budget she required to meet the growing demands on her office to investigate maladministration and abuses of state resources and privileges.

But as she faced pressure and attacks, she was also gaining more and more public support and confidence, as well as raking in accolades and awards, including featuring on Time’s 100 Most Influential Persons in the World.

Anger and resentment towards Madonsela increased when she joined the Economic Freedom Fighters’ application to the Constitutional Court to clarify her powers. Some in the ANC perceived this as reflective of her political loyalties.

The judgment of the Constitutional Court was devastating for the president and the National Assembly, finding that both had violated the Constitution. The ANC suffered severe reputational damage as a result, which some blame on Madonsela’s “attention-seeking tactics” rather than their own mishandling of the matter.

But why would anyone want to kill Madonsela? Why now, when the most controversial case is all but done and all that remains is for Zuma to pay back the money? And why five months before Madonsela’s term as Public Protector comes to an end?

The Sunday Times reported that Madonsela received information from a police informant that a Western Cape gang boss had been paid R740,000 to orchestrate her murder. It was alleged that that three hitmen were planning to kill Madonsela next month in a hit made to seem like a car accident.

Madonsela appears to be rattled by the information. “I’m traumatised. I don’t know who was behind the alleged plot and what their motives are,” she told the paper.

But even though she has known about the threat for some time, it has not deterred her from her work. Last week Madonsela released two reports on the conflation between the ANC and the state in events in 2009 and 2011. The reports have again angered the ANC, which has urged the government to take them on review.

It does not mean, however, that Madonsela is such a thorn in the ANC’s side that someone in the party or a sympathiser would pay to have her killed. It is also often overlooked that there is a huge team in the Office of the Public Protector involved in investigating thousands of cases every year. The latest annual report of the office states that 24,642 cases out of 39,817 were successfully finalised. Madonsela is obviously not involved in all these investigations, most of which are dealt with away from the public eye. It is also reasonable to conclude that through these cases, Madonsela, or her office, have antagonised many people who were unhappy with the outcome of the cases.

While Nkandla was the showstopper case, there were other major cases involving high-flyers. These included SABC chief operating officer Hlaudi Motsoeneng, former police chief, now Deputy Minister, Bheki Cele, former chief electoral officer at the Independent Electoral Commission Pansy Tlakula and Minister Tina Joemat-Pettersson in her previous portfolio of Agriculture, Forestry and Fisheries. However, to assume that someone among the thousands of people she investigated over her seven-year stint would want her killed now, after the fact and on the brink of her leaving the office, seems illogical. But vengeance and human frailties do not always make sense.

Some of Madonsela’s detractors believe the revelation about the alleged hit is another “attention-seeking stunt” to build her fan base. It has also been suggested that Madonsela is preparing for life after the public protector’s office, and though she has repeatedly denied it, suspicions remain that she will enter the world of politics. But it would be quite tacky to pull such a stunt, and involve the police, particularly for Thuli Madonsela, who prides herself on trying to prevent the misuse of state resources.

The public protector’s office says this is not the first time there have been threats against their staff. It is to be expected that those probing multimillion rand deals and interfering with the access of public officials to state resources would be considered nuisances. South Africa has a thriving underworld where organised crime has tentacles in politics, and with corruption reaching endemic levels, the possibility of dirty tricks and assassinations cannot be discounted.

It should also be borne in mind that in the five months Madonsela still has in office, she can still do damage to the patronage networks. One of the most high-profile cases her office is currently conducting is a request by the Dominican Order in the Catholic Church to investigate the involvement of the Gupta family in state affairs and the awarding of contracts to companies linked to the family. It is not clear whether this investigation will be complete before Madonsela retires or whether it will be her swansong.

Threats to Madonsela and her staff could be aimed at physically harming them or warning them to back off. The threat could also be a warning to whoever comes after Madonsela to discourage him or her from continuing her mission to rid government of the rot and expose those who abuse their positions to benefit themselves and their friends and families.

Whatever the motives are, the threat against Madonsela cannot be taken lightly. The public protector and her staff are playing an essential role in exposing maladministration and corruption and ensuring that South Africans are protected from abuses. There are many people who would like nothing more than to see her and her staff recoil in fear, and to ward off others in the media and civil society who might inhibit or expose their capture of the state.

The danger of South Africa becoming a Mafia-style state is real, with dodgy businesspeople pushing the buttons of political leaders, and pressure and threats against those who stand in their way.

Madonsela has shown courage and commitment in her work, and for that, she became an enemy of the political elite. The best way to ensure her legacy continues is to protect the integrity of her office so that the public protector continues to be a beacon of excellence in the public service. A threat to her is a threat to all of us. DM