Op-Ed: The right to basic education and Vuwani 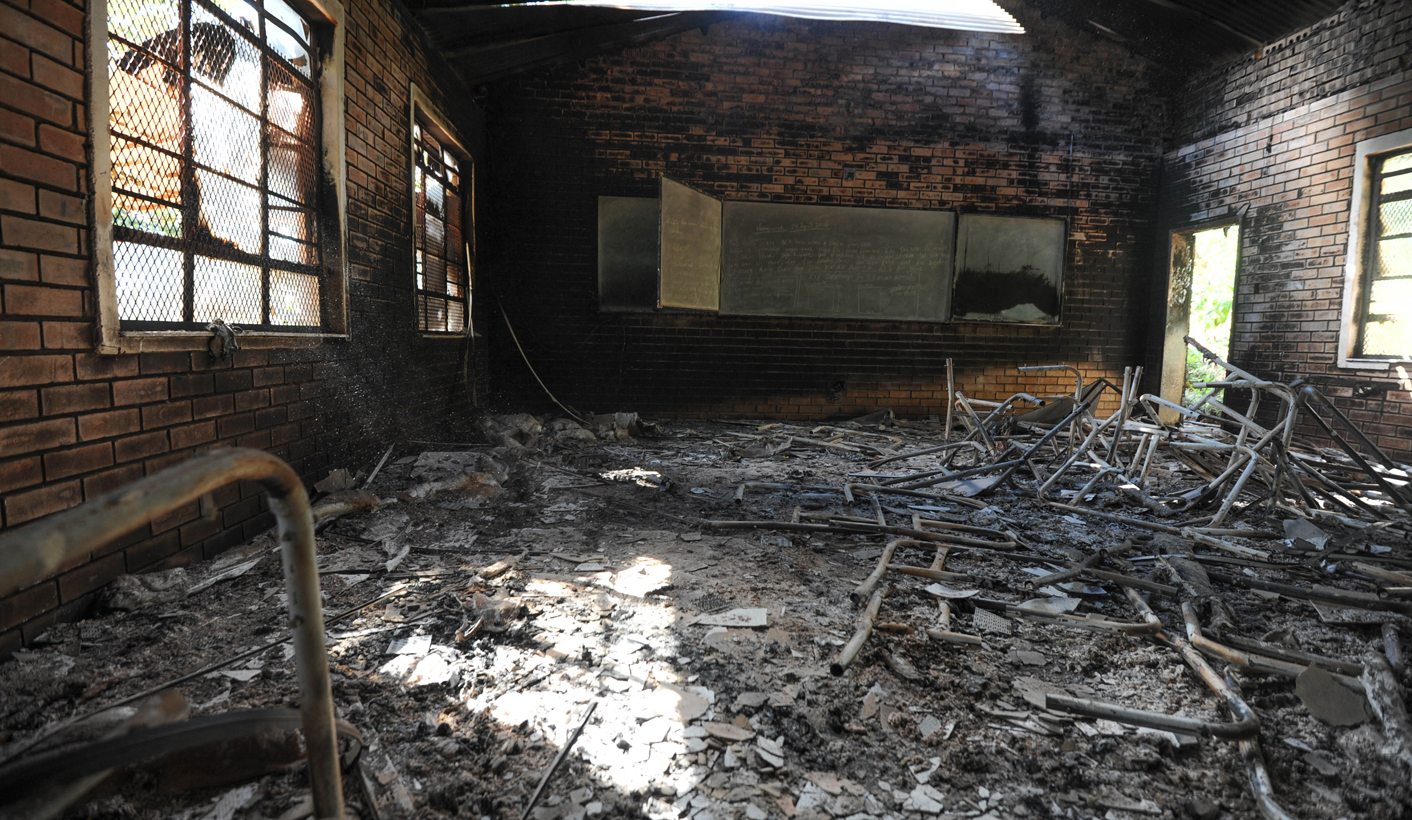 If you had asked most South Africans a fortnight ago where Vuwani was, smart money would be on very few knowing. It is a testament to the heartbreaking chaos and destruction that has taken place there this month that Vuwani is on everyone’s lips and has increasingly trended on social media. By NGQABUTHO N. MPOFU for SECTION27.

All photos by Section27.

According to media, police and government reports, as of Sunday 8 May, 24 schools had been burnt and/or vandalised in the area. This was allegedly done in protest of a High Court decision that threw out the community’s bid not to be moved into the new Malamulele municipality. These actions have been strongly condemned by most commentators, including political parties, trade unions, civil society, the state and on social media.

Included in the destructive fires that decimated school buildings were toilets, textbooks and furniture. All these things can be rebuilt and replaced in time using a large amount of money, but most critically the (immediate) futures of children and their families have been placed on hold and possibly damaged. This in a province that has been struggling to ensure that black pupils from historically (and currently) marginalised, rural and poor communities have an education that is on par with those in historically more advantaged areas. These schools are mainly located in the Bungeni, Vuwani, Vreboom, Masia and Mashau areas. According to the Department of Basic Education (DBE), 42,664 pupils have been affected by the forced closure of schools in the district. That is 42,664 pupils’ rights to basic education infringed.

On Friday a team from SECTION27 and Basic Education For All (BEFA) set off to Vuwani. We have been working in the province and district for several years trying to ensure that the right to education is realised through the provision of safe toilets, textbooks, furniture and better infrastructure to schools, so were anxious to see for ourselves how bad the damage was and to meet with community members, pupils and educators.

Particularly jarring at one of the first schools, Frank Mukhaswakule Primary School, was the sight of children playing in a playground full of torn textbooks. Behind them silently stood the smouldering edifices of what was once their school.

Estimated costs for the reconstruction of the schools is north of a staggering R400-million, excluding contents, in other words this involves buildings only. To put this in perspective, the Limpopo Department of Education’s (LDoE) 2016/2017 budget that caters for the province’s 4,062 schools is R930-million. The rebuilding of these 24 schools would account for almost half (43%) of the budget if the LDoE does not get it from other line items.

Our visit confirmed that some schools that have historically worked with our organisations were among those burnt. This is particularly harrowing given the long and arduous journey some had been through to win the gains, often small, they had achieved.

While the plight of Limpopo schools has been met with pessimism in some quarters, our experience has been that there is some hope and lots to fight for. Over the past few years our organisations have worked with Tshinavhe Secondary School, among others. Tshinavhe, with 382 pupils (182 boys and 200 girls), represented everything that is possible when stakeholders work together. The lack of coverage about this is an indictment on all the stakeholders involved. This was a good news story. Through engagement with the DBE and the LDoE, the once dilapidated school, which had overcrowded classrooms, substandard toilets and faced a severe shortage of furniture, gradually improved.

In the past three years 16 classes, an administration block and a nutrition centre had been built. Its problems with furniture, water and infrastructure became a thing of the past. While challenges still existed in relation to sanitation (some toilets had been built at the bottom of a slope and are negatively affected during the rainy season), the school is on the province’s sanitation plan.

Last week protestors vandalised the school and burnt a building to the ground. Years of work towards realising quality basic education for pupils, who were already playing catch-up, went up in smoke in an instant.

However, it is important to note that not all the problems of the LDoE can be placed at the feet of protesting community members in Vuwani. According to StatsSA, only about one in 10 (10.8%) of schools in Limpopo had access to a library, a quarter (25%) had an administration block, less than one in 10 (7.8%) had a laboratory and less than three-quarters (67.4%) have access to piped water prior to this tragedy. The LDoE further stated that the CSIR social audit on schools infrastructure in Limpopo found that there was a shortage of 6,217 classrooms in the province.

Furthermore, according to the LDoE budget speech, the interim CSIR report highlighted that there was a shortage of 40,448 toilets, the vast majority (33,669) of which were pit latrines that need to be replaced.

The Regulations Relating to the Minimum Uniform Norms and Standards for Public School Infrastructure stipulate that schools that do not have power, sanitation and/or a safe water supply should be prioritised by the end of 2016. That’s this year. Vuwani has happened. God knows when this will be possible now.

In addition, in the aftermath of the Supreme Court of Appeal’s December 2015 judgment in the Limpopo textbooks case, which found that every pupil has the right to their full complement of textbooks before the start of the school year, SECTION27 and BEFA have been monitoring textbooks delivery and sending reported shortages to the LDoE. Four years after the first textbooks case and three weeks into the second term of 2016, we have received over 17,000 reported textbooks shortages from three of the five districts in the province we have monitored. We will be visiting the remaining districts in the next couple of weeks.

Another case of a client school

The case of Vhafamadzi Secondary School illustrates the point that problems did exist in Limpopo education. BEFA and SECTION27 have been working with the SGB of the school to improve the infrastructure and sanitation since 2014. The school caters for 844 learners (416 boys and 428 girls). All 24 classrooms were dilapidated prior to the protests. There were dangerous cracks in classroom walls that were placing pupils and educators alike in danger and there was an urgent need for new classrooms. Only three of the classrooms survived the fire(s).

The school had seven new blocks of enviro-loos, which was a major step forward in ensuring the dignity of pupils and teachers but the school’s past is reflective of the challenges that numerous other schools face in the province.

While the dominant media narrative about Vuwani has focused on the destruction of state property, it is important to emphasise that the Vuwani community is not homogenous and the BEFA/SECTION27 team in Limpopo came across many concerned parents, teachers and community members that guarded their schools day and night, determined to protect pupils’ right to quality basic education.

Two cases immediately come to mind. Educators, civil society members and community members in Tshipakoni Secondary, a school that had been vandalised and had the staff room partly set alight (it would have been much worse if it weren’t for the heroics of a teacher and a community member who reportedly doused the flames) constantly stood watch over the school and made sure that it wasn’t vandalised any further.

Parents and community members also protected Avhatondwi Primary School. Sadly arsonists burnt parts of it in the early hours of Saturday morning. It wasn’t because of a lack of trying on the part of the community.

During his budget speech last month, the MEC for Education in the province Ishmael Kgetjepe stated:

“We have in our midst those who for whatever reason decide that the burning and destruction of school facilities is an acceptable way of venting their frustrations. Such people are an enemy to the people and the state itself. They are destroying the future of a generation…”

“Whatever gains, if any, which the perpetrators of theses acts might have realised can never be compared with the loss that those learners have suffered. A year lost can never be regained and has set back for a number of years the whole community, the province and the nation.”

Reading these poignant words after the events of Vuwani is heartbreaking.

MEC Kgetjepe, however, goes even further to say:

“We would like to reiterate our position that while we will try our best to prioritise storm-damaged schools, we will however not do the same for schools that are deliberately vandalised and destroyed. We will not be seen to be rewarding anarchy and lawlessness.”

What is clear is that after the dust has settled and the media vans have left, the community of Vuwani and surrounding areas, the state and other stakeholders will have to work together to find sustainable solutions by doing the heavy lifting to get back to zero.

The mother of a Grade 9 pupil, who has been frantically but unsuccessfully searching for an alternative school for her son after Vhafamadzi was burnt, or the parent of a pupil at Avhatondwi Primary School who stood outside, huddled around a fire to try protect the school, do not represent “anarchy and lawlessness”, but active citizenry. It is important that a sustainable solution is reached as soon as possible. DM

Ngqabutho N. Mpofu is the Communications Officer of SECTION27, a legal advocacy organization.