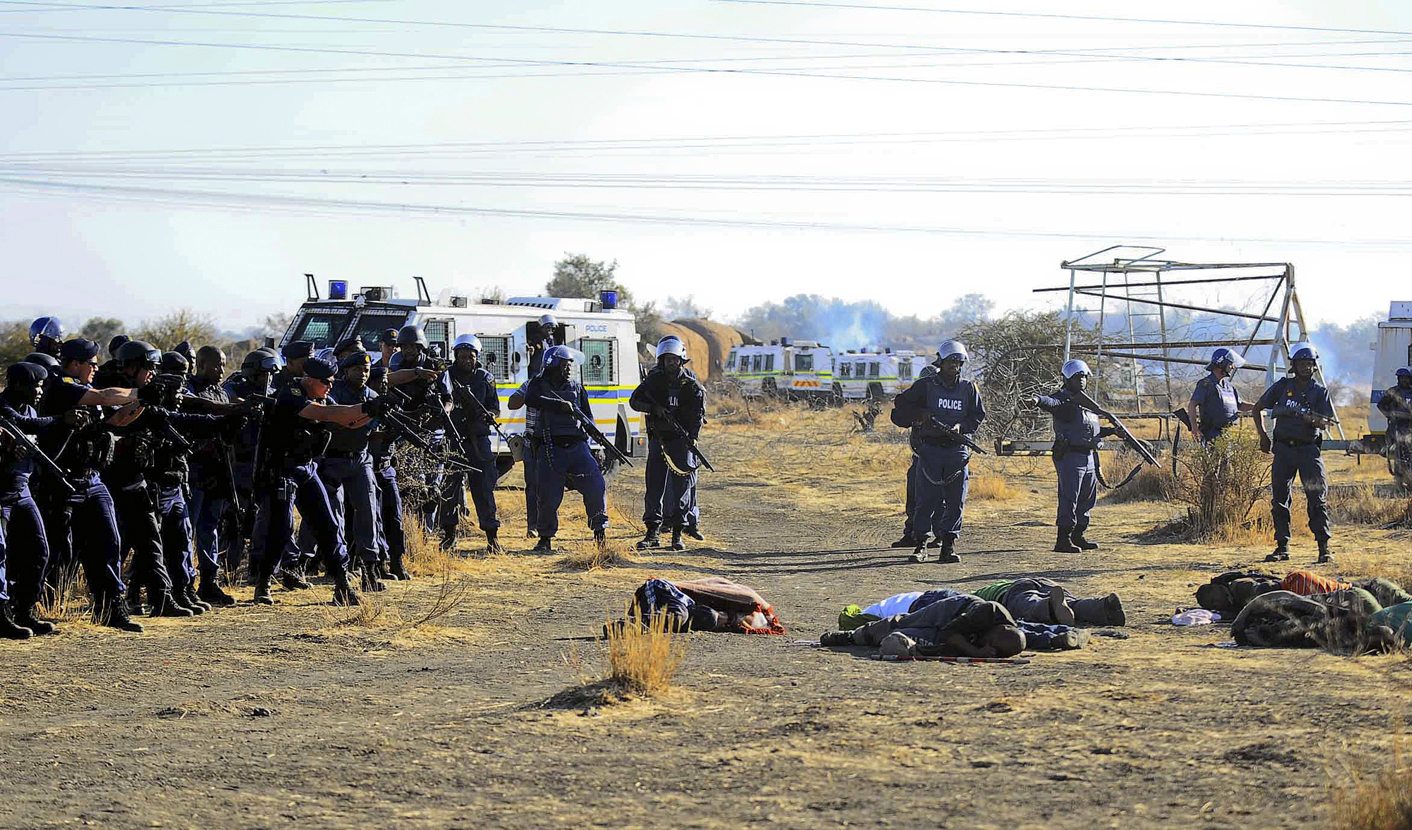 While the inquiry into suspended police commissioner Riah Phiyega’s fitness to hold office has began, showing signs of progress on the recommendations of the Marikana report, compensation discussions for victims of the massacre have stalled. By GREG NICOLSON.

The inquiry, led by Judge Neels Claassen, entered its second day on Wednesday, and heard from its first witness, the tactical response team’s (TRT) Captain Monwabisi Joseph Ntlati. He was questioned by evidence leader Advocate Ismail Jamie about the decision to implement the tactical phase of the Marikana operation.

In an affidavit to the Marikana Commission of Inquiry, Ntlati said of a meeting at 14:30 on 16 August, “During the briefing we were informed that the national management instructed that the police must act against the armed strikers as they have to be disarmed and dispersed. The POP members were to disperse the strikers and TRT will encircle small groups and disarm them (strikers).” On Wednesday he stuck to his position that he was told the order came from national management.

The inquiry into Phiyega’s fitness to hold office stems from a recommendation of the Marikana Commission of Inquiry. “The leadership of the police, at the highest level, appears to have taken the decision not to give the true version of how it came about that the ‘tactical option’ was implemented on the afternoon of 16 August and to conceal the fact that the plan to be implemented was hastily put together without [public order policing] inputs or evaluation,” said the inquiry’s final report.

Phiyega and other top officers did not disclose to the commission that the decision to implement the tactical plan was taken at a meeting of the SAPS national management forum (NMF) on 15 August. When queried on the details of the meeting, Phiyega and other officers were vague and struggled to recall details.

Phiyega has strenuously denied the findings and has welcomed the chance to defend herself. She claims there is a “witch hunt” designed to discredit her and other officers as SAPS leadership is being restructured.

In a letter to President Zuma, which evidence leaders will introduce into the inquiry, Phiyega is reported to have claimed Marikana commission chair Ian Farlam was malicious in his findings. The leadership of Phiyega, her provincial commissioners and spokesperson has also brought into question after the provincial commissioners released a statement defending their boss. It was later revealed Phiyega was in the meeting that discussed the statement supporting her.

The inquiry into the police commissioner is expected to take five weeks, but in its opening days Phiyega is already on the back foot. Judge Claassen has ruled that witnesses and evidence not brought before the Marikana inquiry can be introduced, potentially widening the scope of criticism.

The Marikana Support Campaign has called for Phiyega to reveal more details of what happened regarding Marikana and stop being “the fall guy”. “She must stop protecting her political seniors in this matter.  We call on her to tell the whole truth and nothing but the truth,” it said in a statement on Tuesday. At the inquiry on Tuesday, members of the Marikana Support Campaign reportedly chanted “blood on her hands”, referring to Phiyega.

The group also announced it is trying to raise funds to take the Marikana Commission of Inquiry’s findings on judicial review and plans to host its own civil society inquiry on the findings.

The Marikana Support Campaign claimed the state continues to treat the victims of the massacre with contempt. While lawyers have begun discussions on compensating the families of those who died in Marikana and those who were injured and arrested, the state has been criticised for the slow process.

“We wish to reassert this amounts to a callous response on the part of the state. Justice delayed is justice denied. But we will hold out for justice, these killings were unlawful and must be found by our courts as such,” said the Marikana Support Campaign.

In September last year, President Zuma announced the state would enter into discussions on civil compensation claims filed by the relatives of those killed in Marikana and the injured and arrested mineworkers. Lawyers however say the process is moving slowly and may end up in court.

“They came to us to say they want to settle this matter,” said Nomzamo Zondo, from the Socio-Economic Rights Institute (SERI), which represents the relatives of 36 people killed in Marikana, on Wednesday. “But they’re making it move very slowly for reasons we don’t understand.”

Zondo said the state has asked her clients for information proving their identity so the compensation discussions on loss of financial support can move forward, but the presidency’s lawyers haven’t received instruction on the relatives’ demand for an apology or their call for compensation for their grief, loss of family life and loss of parental care.

“They want to appear reasonable but they’re not reasonable,” said Zondo. SERI has told the presidency that if it doesn’t get an answer soon, it will apply to court for a default judgment on the compensation claims, which the court may grant because the state filed its opposing papers after the initial deadline on the matter.

Andries Nkome, lawyer for the injured and arrested mineworkers, is also unhappy with the way the compensation discussions are being handled. Apart from the slow pace of the talks, he also believes the state might be trying to divide the two different groups of claimants, which have committed to working together throughout the process. DM