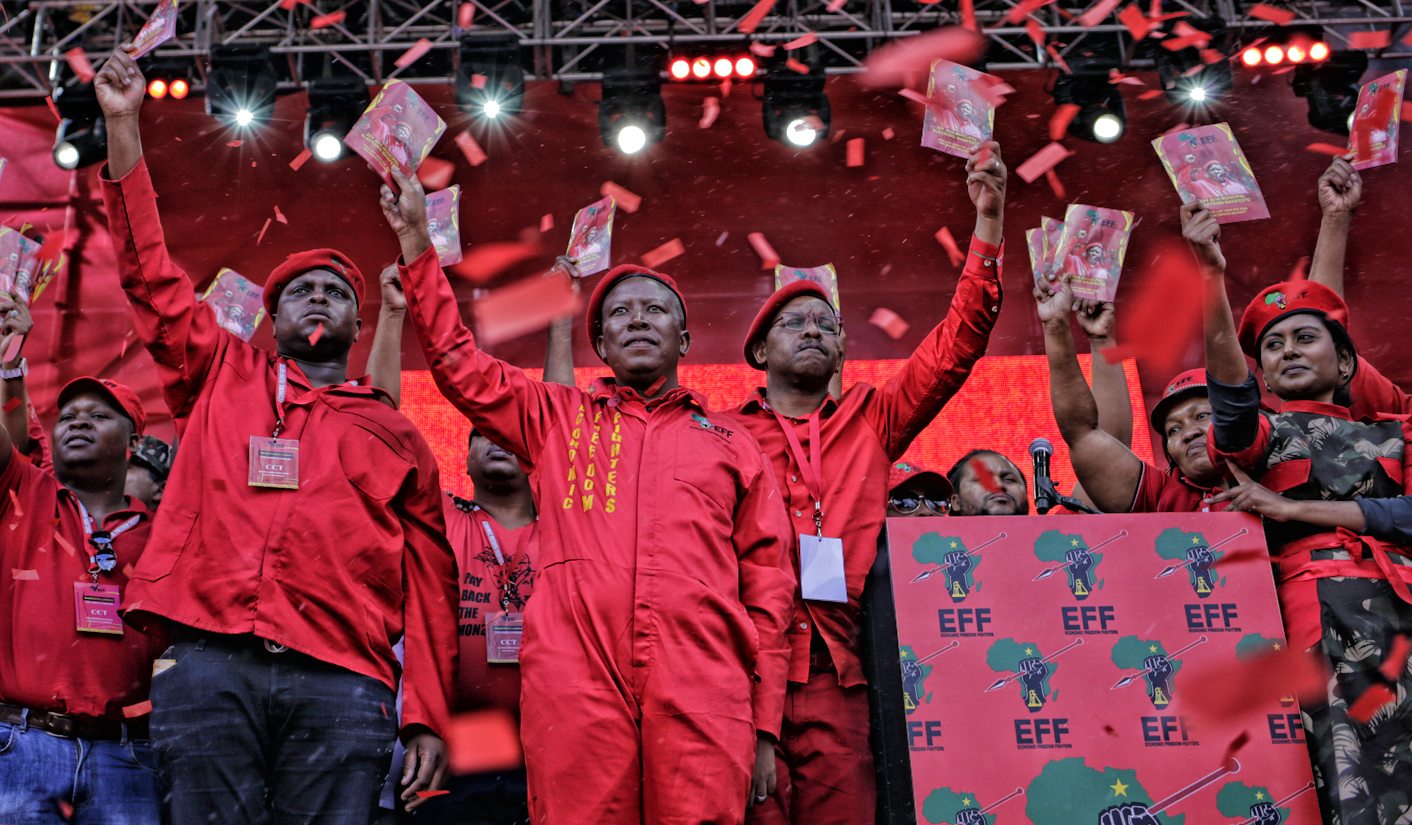 The EFF has something in the 2016 local government elections that its two main opponents, the ANC and Democratic Alliance, do not have: a blank slate. With the EFF never having contested municipal elections before, all eyes were on their manifesto to see what would be on their target list. True to form, the EFF is setting out to do things differently and is exploiting what the ANC tried and failed to do – introducing a New Age revolutionary fighter, and perhaps some radical social engineering, coming soon to a local council near you. By RANJENI MUNUSAMY.

What made the Economic Freedom Fighters’ manifesto launch on Saturday a success was not just the packed to capacity stadium, the chavista-style euphoria bursting from the stands or the fact that Julius Malema kept anyone watching the event enraptured for the duration of his speech. It was the way the EFF successfully baited its constituency with clear, perceptible targets – commitments, not promises, according to Malema – that ordinary frustrated, disillusioned people can relate to and desperately need.

Yes, there was the usual fire and brimstone from Malema and a terrifying new threat. He warned President Jacob Zuma that if he did not leave office, a military coup would ensue.

“This is the army of General (Siphiwe) Nyanda (the former chief of the South African National Defence Force). I warn you, Zuma. That army will soon turn those guns against you,” Malema said to rapturous applause. It is not yet clear whether this means that Nyanda and other former Umkhonto we Sizwe commanders, who recently expressed their concerns about Zuma’s leadership, are now EFF supporters or whether Malema is drumming up the levels of discontent within the African National Congress (ANC).

Whatever it is, the EFF is pitching a complete shake-up of society, with its fighters ready to penetrate municipalities around the country and assist communities in their daily struggles. The EFF manifesto was not the usual list of promises about service delivery and improving the efficiency of the government system. “Revolutionary councillors”, according to the document, are supposed to deliver bigger houses so people can have better sex lives in separate rooms from their children, and help the poor bury their dead. They should be accessible 24 hours a day to assist communities, and EFF-run councils would operate six days a week.

The EFF has undertaken to scrap the use of consultants and declared that security guards, cleaners, refuse removal workers, drivers and other workers should all be insourced.

EFF councillors must live in the communities in which they are elected and know every household in their ward, taking particular care of orphans, pensioners and the disabled. The EFF wants the best qualified people to work in their municipalities, not those who are politically connected, Malema said. “We are not going to hire anyone on the basis that they are EFF leaders,” he said. Those who lack the appropriate skills should be trained.

In essence, the EFF wants to overhaul the ANC’s cadre deployment policy from the bottom up. It is doing so by defining its own street-smart fighter to replace the good cadre gone bad.

The ANC’s national general council (NGC) in 2000 introduced a novel concept that was to redefine and modernise the average ANC member. The “new cadre” was, at the time, what anyone aspiring to serve in ANC structures and in government should be – highly skilled, avant-garde, morally upstanding and socially responsible.

“Within the ANC we need to build a corps of cadres capable of implementing required programmes and carrying forth the traditions of the movement. Our deployment structures must be able to draw on cadres who are committed, capable and innovative; cadres who are rooted among our people, and are dedicated to working with them to realise their aspirations,” the 2000 NGC declaration read.

Through the Eye of the Needle was the ANC’s internal discussion document released thereafter, spelling out how the best cadres should be chosen to lead the transformation of society. A section of the document set out the broad requirements of leadership and the core of the ANC’s cadre deployment policy.

“As a revolutionary organisation, the ANC needs revolutionary cadres and leaders… A leader should constantly seek to improve his capacity to serve the people; he should strive to be in touch with the people all the time, listen to their views and learn from them. He should be accessible and flexible; and not arrogate to himself the status of being the source of all wisdom,” the document stated.

“A leader should lead by example. He should be above reproach in his political and social conduct – as defined by our revolutionary morality. Through force of example, he should act as a role model to ANC members and nonmembers alike. Leading a life that reflects commitment to the strategic goals of the NDR (national democratic revolution) includes not only being free of corrupt practices; it also means actively fighting against corruption.”

The Through the Eye of the Needle document has been affirmed at subsequent ANC conferences as the fundamental guide to selecting good leaders to represent the organisation in all spheres of society. Speaking at the ANC’s 2002 policy conference, former president Thabo Mbeki suggested that those who do not meet the grade of the superior standard cadre should be weeded out of the organisation.

The work of defending and implementing the ANC’s policies “required the kind of cadre of our movement that our Port Elizabeth national general council said we must build”, Mbeki said. “This is a cadre who strives at all times to raise his or her political consciousness. This is a cadre who works continuously to improve his or her skills to enhance his or her capacity to serve the people of South Africa,” Mbeki said.

The next part of Mbeki’s speech was perceived to be him wanting to hound people out of the ANC. He was, however, forecasting that many people would fall short of the definition of the new cadre.

“It may be that not everybody accepts what some may consider to be burdensome obligations of membership of the ANC. We are permanently interested in increasing the size and strength of our movement. Nevertheless I am convinced that we must also pay particular attention to the principle – better fewer, but better!” Mbeki said.

The ANC has been at continuous war with itself to define who, and what, is a true cadre, worthy of senior leadership positions. Many times the tendency to speak frankly or the refusal to toe the party line are considered “ill-discipline”, while involvement in scandal and corruption are not. The ANC’s 2015 NGC made another attempt to repair the party’s value system, resolving to “inculcate within our cadreship the values of service, selflessness, integrity and discipline”.

Clearly patronage and corruption have been too heady an addiction in the ANC, leading to rot and state capture at the highest levels. The EFF leadership is aware of how much this has contributed to the growing disillusionment with the ANC and is therefore defining the character and conduct of their deployees in local government to minute details – they should not get drunk and pee in the streets and should not waste free wi-fi on internet pornography. EFF councillors who are involved in corruption and ask for money or sexual favours will get the boot.

The EFF prototype councillor should have special qualities, according to the manifesto. These include:

This does appear to lean more towards the creation of a superior civilisation rather than new municipal councils, but the EFF’s model local government representative sets out to counter the fat-cat culture that cadre deployment has produced.

Of course, the EFF’s big commitments could fall flat in the same way many of the ANC’s have done, but they are working from a clean slate. The EFF has not disappointed its constituency yet, bringing the roof down as an opposition party as they had promised to do. But governing is hard, as the ANC and DA have learnt.

If the EFF can turn the hype and hunger for power evident at Orlando Stadium on Saturday into votes, “revolutionary councillors” should be making their debut in municipalities in August. And if they last longer than the ANC’s “new cadre”, the revolution would indeed have arrived. DM