Trump: A Lesson for South Africa?

Trump: A Lesson for South Africa? 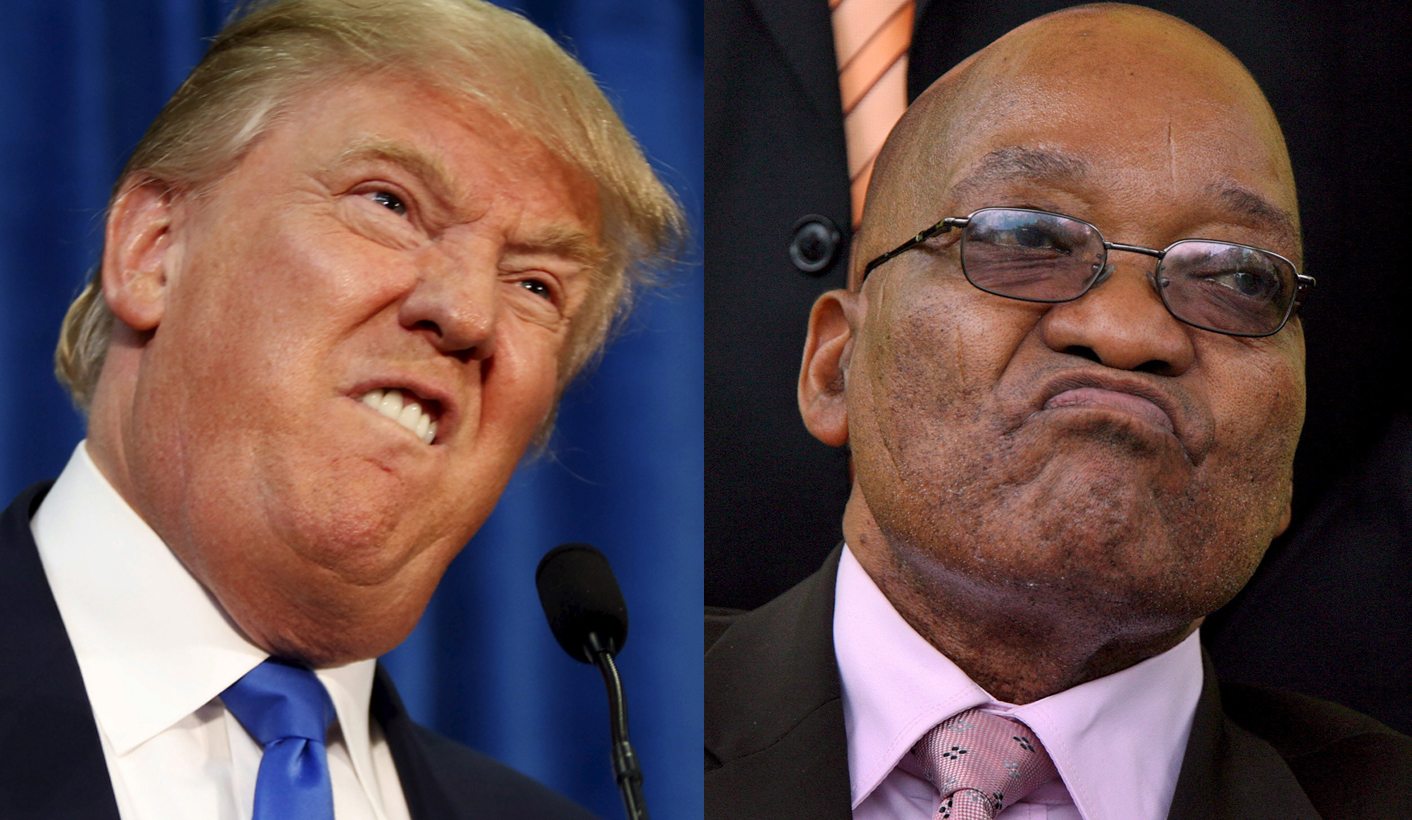 Donald Trump is back. His fortnight on the political back foot ended with his New York primary victory. He’s back to causing Republican leaders apoplexy, at the same time as he stokes xenophobia and racism on the ground. JOHN MATISONN, after a trip across the US, finds a lesson for South Africa. Hint: it’s not that Julius Malema is our Donald Trump.

Trump is a symptom, not a cause. Proof, if any were needed, is in his main Republican opponent, Senator Ted Cruz, so hated by every fellow Republican senator that one said if Cruz was shot dead on the floor of the senate, no senator would convict the murderer.

How did the Republican Party sink so low that it could not find support for a single candidate for president not detested by the party establishment and more than 60% of American voters?

No, this is not a problem of one or two crazy leaders: it’s a problem of the Republican Party itself. For several decades the party has moved further right, further into a narrow interpretation of conservatism that promised working-class and middle-class Americans a better life if only the government cut taxes on the rich and stopped providing services like health care to the rest.

The illogic is blindingly obvious. If you doubt it, read this quote from a Republican voter’s interview, who said, “Just keep the government away from my Medicaid.” He loved that government health programme so much he convinced himself it had to be something provided by the private sector.

This burgeoning extremism did not happen by itself. Two books popular right now in the US offer an explanation.

The first, Dark Money by New Yorker writer and Pulitzer prize-winner Jane Mayer, explains the extraordinary story of how the party’s ideological contortion was fuelled. I had a particular South African interest because, though it focuses on funding by a small group of billionaires around the Koch Brothers, the book starts with their predecessor, Richard Mellon Scaife, whose name first cropped up in South Africa over his links to Muldergate in the 1970s. (Mellon Scaife was also one of Bill Clinton’s biggest enemies during his tumultuous two terms as president. – Ed)

Charles and David Koch (Americans pronounce it Coke) expanded Scaife’s funding of right-wing US intellectuals and think tanks to provide the ideological ammunition. In the last election cycle, funding by Koch-affiliated groups amounts to $899-million, very close to the $1-billion in each of the Obama and Romney war chests from 2012.

The Kochs’ fortune was established by their father Fred, who built oil refineries for the US, for Stalin, and for Hitler. His aviation fuel was then used by US bombers in 1944 to destroy the German refinery he built. It was providing Hitler with oil for his military. Fred Koch despised the traditional Republican Party. He was, believe it or not, a founder of the racist John Birch Society as well as a libertarian, that is to say a believer that almost all government except for its military and police is evil.

His sons developed a three-point plan: first fund scholarships to build up libertarian intellectuals. In the second phase, build think tanks in which they can work and develop policies. In the third, fund Republican politicians who will implement them. In the last decade they were key to the founding and funding of the Tea Party, which looks like a grassroots anti-government backlash, but finds its key support from the Kochs.

An answer is provided by the second book, Why the Right Went Wrong, by liberal Washington Post columnist E. J. Dionne. Dionne argues that their promise to the ordinary American voters was not kept, and it was never capable of being kept. Cutting taxes for the rich and cutting services to the rest will not make ordinary American lives better.

The two recent presidents who campaigned as conservatives, Ronald Reagan and George W. Bush, promised smaller government, but both expanded it, running up larger government deficits than Democratic presidents. So Republican ideology has left its voters confused.

Most of their supporters may not spend much time thinking about politics, or following these ideas through to their logical conclusions. But they do know their lives did not get better. They are ripe for the choices they are being offered by Trump and Cruz.

Cruz says if we just go back to Reagan’s conservative virtues like small government and low taxes, their lives will get better. It’s the same snake oil, only more of it. In Cruzworld, George W. Bush failed to be conservative enough.

Trump is the other option. He tore up the recent Republican rulebook. Trump does not care about libertarian principles like free trade or deficits. He says he will do anything he feels like, whether it’s closing down Nato, the WTO free trade rules, or relations with neighbours in Mexico.

This transgresses so many fundamental Republican values that elected Republicans are in hell. What is more, they know it will fail in the general election because America’s voting population of Latinos and Asians and African-Americans are now too big to ignore. Trump has alienated them. If he is the candidate – still far from a certainty – he will drag down many elected Republican politicians with him. The Senate will probably be won by the Democrats. Even the House of Representatives could revert to Democratic control.

At its heart, Republican ideology has failed. The top of the ticket offers no leadership. The vision is gone.

Perhaps South Africans will recognise a lesson. What, indeed, does the African National Congress stand for in 2016? Integrity? No. A recognisable model for job creation? No. The nonracial egalitarian coalition? No. President Zuma’s leadership has confused all the ideas that under Nelson Mandela seemed clear.

But the 2016 reality requires fundamental reform. Frankly, before 1994 the liberation movement never did think through how it would govern the South African economy. There were tendencies – Marxist, socialist and capitalist. They were never developed into a coherent vision that unions or business could unite around.

With an unofficial jobless rate of 35%, creating jobs need to be the laser focus of any South African government. It must become the top priority. It isn’t now. The new mining charter does not refer to jobs, yet tens of thousands of black South Africans’ jobs disappear each year in this sector.

In the last 21 years, it often seemed as if the ANC government was running a capitalist economy on Marxist rhetoric. There was no move to create a Marxist economy. The economy stayed market-driven, but the leadership often sent contradictory messages about whether it supported its business sector. Business can take robust, even punitive regulation, provide it is grounded in reality and provides certainty. Under Zuma, the revolving door of ministers accelerated, and new ministers kept returning their sectors to square one.

In 2016, the American and South African elections will see powerful political parties humbled. Both will survive better than they deserve, on paper. But both will be forced into introspection, out of which both may rebuild their former glory. But only if they recognise where they lost their way and offer something that makes more sense to the ordinary voter.

What South Africa needs is a coherent vision, that combines a social safety net with a muscular plan to expand business. A key component will be improving education, which means prioritising top rate teaching, top rate universities and top rate technical training. These goals are not impossible to achieve. But they start with an informed, determined vision based on the economy we have, not the one we might have preferred. DM

John Matisonn is the author of GOD, SPIES AND LIES, Finding South Africa’s future through its past.