Cachalia: More than a name for the DA? 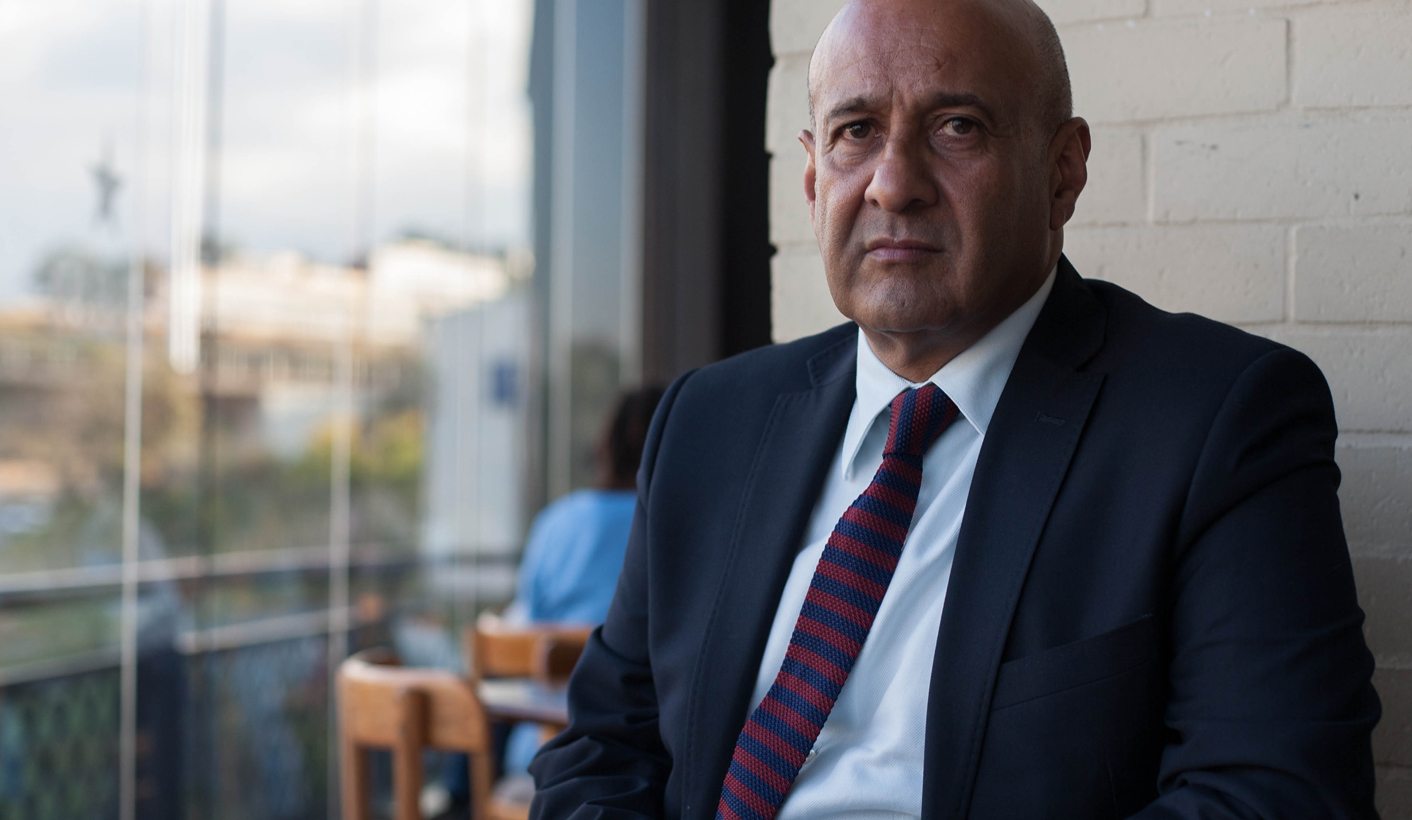 On Tuesday, the Democratic Alliance announced Ghaleb Cachalia as its candidate for Ekurhuleni mayor. GREG NICOLSON joined the son of Struggle veterans Yusuf and Amina Cachalia to find out why he no longer supports the ANC and whether he thinks he can actually win the city.

“Hell, I think it’s doable,” says Ghaleb Cachalia as Ashor Sarupen, the DA provincial legislature member at the table, rolls off voting statistics. “We think we’ve got a hell of a chance.”

They’re sitting at Mugg & Bean in Killarney and Cachalia is curt after a press conference on Tuesday morning and back-to-back interviews. He’s wearing a navy suit, a white shirt with cuff links, and a crocheted tie, every bit the intellectual corporate who has decided it’s time to join the DA, hoping to do his bit for the country and the City of Ekurhuleni.

Because of his surname, it takes 30 minutes before we talk about the municipality he hopes to lead after the August elections. Ghaleb Kaene Cachalia was brought up during South Africa’s fight for freedom. His parents are Struggle veterans Amina and Yusuf Cachalia. His mother’s autobiography When Hope and Reason Rhyme frequently mentions her son: how the joy of his birth was dimmed by the arrest of the Treason Triallists; how he stood up to police giving his father a banning order; how Nelson Mandela was disappointed he couldn’t congratulate Ghaleb on his wedding, and how he met the ANC icon the day after he was released from prison.

Now he’s campaigning for the DA, campaigning against the ANC. Given the loyalty the ANC commands, it’s hard to believe. The DA has brought in big names before. Earlier this year Lindela Tshwete announced he was a member and Herman Mashaba is leading the party’s efforts to win Johannesburg. But the son of the Cachalias leading an opposition campaign?

Until he joined the DA, Cachalia was never a member of a political party, but being born into the ANC, it was his natural home.

“You know, my family history is the bread and butter of politics. I grew up in a political home with a political milieu,” he says.

As a teen, his studies at Waterford College in Swaziland were interrupted when he was forced to spend 10 years in the UK due to passport issues with the South African government. There he campaigned with the Anti-Apartheid Movement and joined the Black Students Society at Wits when he returned.

“In many ways, in the early phase of the ANC coming to power I watched on the sidelines hoping that the project that was started would come to some sensible fruition. It hasn’t.”

Cachalia’s Facebook page is crammed with political posts (recently they are staunchly against the ANC), and he occasionally writes in the media on current affairs. But his key focus has been in business, working in a range of roles, often in consulting, with and for a host of well-known corporates, and currently heads his own company, Mentisfactum Advisory Services.

“I accept the DA nomination not just because I’m leaving the ANC, but because the ANC has left me,” Cachalia said during the announcement of his candidacy.

“If I can be perfectly honest,” he leans in, “the first warning sign was the arms deal. That was a significant warning sign for me and the way it was handled thereafter and the denials and the shenanigans around it were of considerable discomfort to me.

“I think that set the tone, when a political party okays dubious deals provided that those who set up the deals give unto Caesar what is due to Caesar, and they’re allowed to keep a bit for themselves, or more than a bit, then that’s the beginning of serious rot and that’s what happened. From then on it’s been a spectacular slide downhill, or uphill, depending on which side of the fence you sit.”

He’d been speaking to people across the political spectrum and about a year ago started talks with the DA, not about joining but helping with an influential voice and fund-raising to help build a stronger opposition.

“But recently I decided that I needed to get off my ass as it were and roll up my sleeves and get stuck in.” He joined the party a few months ago and also attended last year’s #ZumaMustFall march.

Many people tried to convince him to change the ANC from within, he says, but corruption is too pervasive in the party and its leaders have failed to question the current course of action, leading him to believe there’s no hope for the party. Besides, the DA is a fit for Cachalia, who calls himself “a liberal with a small ‘l’”. He believes in its values.

“If I was going to become active I needed a home for that activity. I needed a credible home, a home with numerical gravitas and a home that I could relate to in terms of my own political and moral value system.”

He went through the party’s mayoral nomination process and won, beating one other candidate.

The DA’s doomed partnership with Mamphele Ramphele, its efforts to woo big names, and the rapid rise of young black leaders, have been criticised as attempts to transform the face of the party but not its core. But Cachalia says the party’s mayoral nomination process was gruelling, tougher than anything he’s faced in his first day on the media circuit.

Almost on cue, another journalist arrives for the next interview.

“They wouldn’t have come my way just because of my name,” Cachalia says. “There’s no doubt that my name is a plus, it’s important, but I think that speaks to the way the DA operates. It’s not for nothing that they speak about freedom, fairness and opportunity,” he says, citing the party’s core values.

Will it have an impact? Cachalia thinks so. Voters might look at his links to the ANC and potential benefits of backing the ruling party and be willing to weigh up the reasons he has decided to join the DA. “Yeah, I think that that would make an impact,” he says. “Not because of me necessarily because I’m the greatest thing since sliced bread, but because of those factors.”

Certainly, Cachalia won’t convince everybody. Dedicated ANC supporters will probably call him a traitor and those who lean towards radical in the student movements will probably hate him. “They want to talk about transformation but half of them can’t spell transformation,” he says on the student protests. He’s called the EFF “social fascists” on Facebook. He’ll also have to deal with criticism that there’s a culture of racism within the DA.

The test, however, will be whether his announcement, along with Mmusi Maimane’s leadership, Solly Msimang’s Tshwane campaign and Herman Mashaba’s efforts in Johannesburg, can convince the middle class and doubtful ANC voters to give the DA a try. While parts of the Gauteng ANC are doing what they can to limit the damage caused by President Jacob Zuma’s scandals, Cachalia’s announcement couldn’t have come at a better time for the DA, with party stalwarts speaking out against their own ANC leadership.

Over the next month, Cachalia plans to visit all 112 Ekurhuleni wards on a “listening tour” to prepare his manifesto for the city. The ANC has a stronger majority in the city than it does in Tshwane and Johannesburg, but if he does succeed, Cachalia hopes to reduce inequality and improve basic services through cleaning up government and boosting the economy.

The odds are stacked against him, but Cachalia’s already brought the DA one victory in the PR battle. DM