State Capture: Keeping up with No 1, Hawks boss asks for a jet and more money 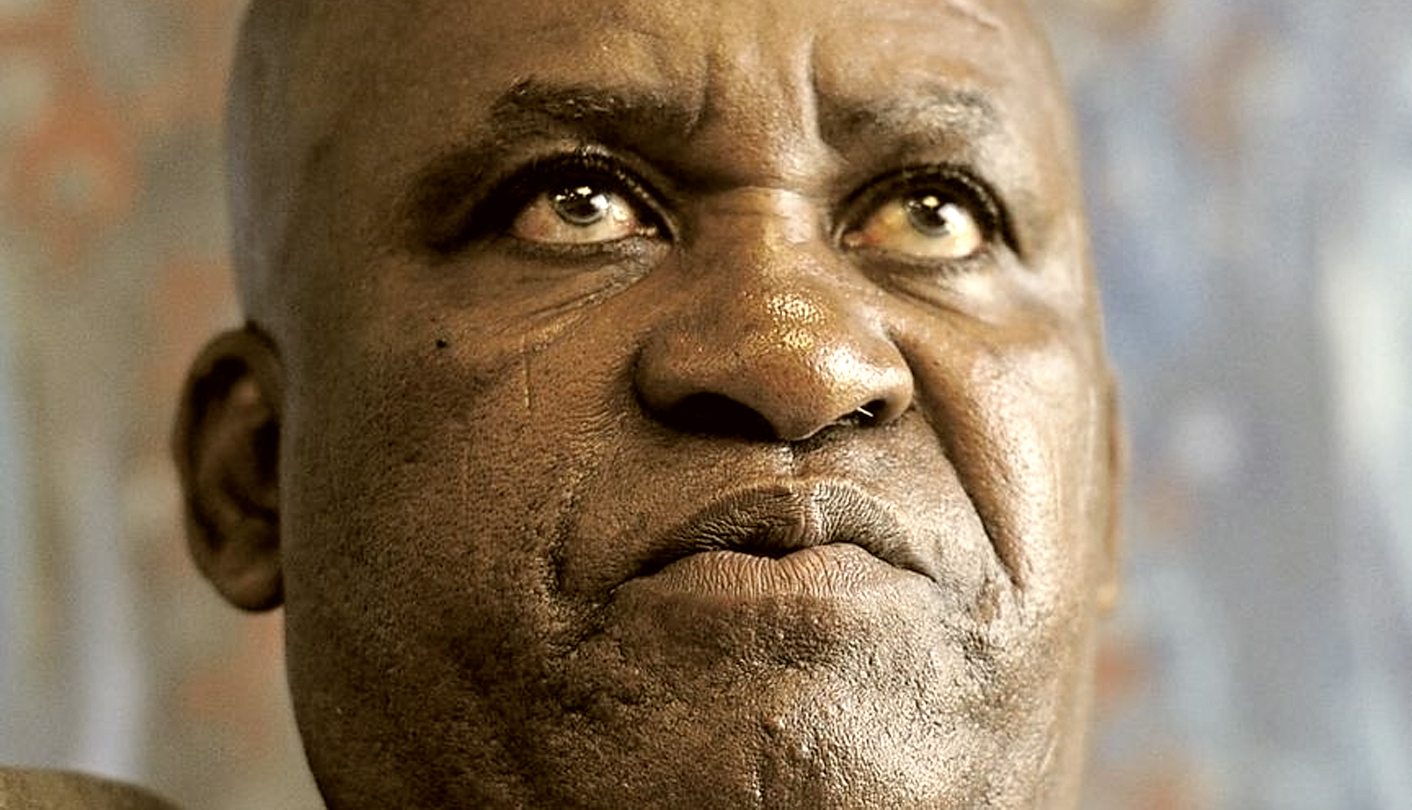 On Friday, while the Johannesburg Magistrate’s court cleared suspended former Gauteng Hawks head Shadrack Sibiya on a charge of fraud, the man responsible for suspending him, Hawks head Lieutenant-General Mthandazo Ntlemeza, was hustling Parliament’s Portfolio Committee on Police for an increased ring-fenced budget and a helicopter or maybe a jet. He also dismissed suggestions that the unit under his command was behaving like a blunt political instrument. By MARIANNE THAMM.

Hawks head Lieutenant-General Mthandazo Berning Ntlemeza is a busy man. Between chasing Finance Minister Pravin Gordhan, warding off court challenges to his authority by civil society lobby groups, making sure former Hawks high-ups stay out of the loop, or keeping tabs on his nemesis, forensic investigator Paul O’Sullivan, he has to to find time to deal with actual violent criminals who are holding South Africa hostage.

And frankly, the Lieutenant-General has had enough of filling in silly forms with junior SAPS members every time he needs to pounce swiftly – thereby also possibly revealing his movements to potential criminals and thus endangering his safety – so he reckons he needs a jet, and if that is not forthcoming he’ll settle for a helicopter so he can fearlessly serve the South African public and soar with the eagles.

Look, a jet or a helicopter is a big ask. But while Ntlmeza on Friday was busking his way through a parliamentary police oversight committee submission for more money for the Hawks, preferably a ring-fenced amount, as well as for the jet and/or the helicopter, it emerged he had forgotten to provide the Treasury with a proper motivation for the requested big-ticket budget/wish list.

It was ANC MP Leonard Ramatlakane who reminded Ntlemeza that without “something on paper” there was little the committee could do to help.

DA MP Zakhele Mbhele quizzed Ntlemeza about the perceived “independence” of the unit and their “hit squad-like” methods of late, to which Ntlemeza replied that the Directorate for Priority Crime Investigation (the Hawks) tried “by all means” not to be politically influenced.

While Ntlemeza and National Police Commissioner Kgomotso Phahlane – who is also facing allegations of possible corruption – were being grilled by the committee in Cape Town, over at the Johannesburg Magistrate’s court suspended former Gauteng Hawks boss Shadrack Sibiya was acquitted on charges of fraud relating to R24,000 worth of travel expenses he had claimed in 2012.

Sibiya’s attorneys accused the NPA of carrying out a malicious prosecution after the prosecutor in the matter admitted that he was told to pursue the case despite it being deficient in material aspects.

Sibiya, who is facing other criminal charges in relation to the 2010/11 Zimbabwean rendition case, has said that attempts to prosecute him were acts of revenge by Ntlemeza who was acting on behalf of his “ally” and president Jacob Zuma’s confidante, former Crime Intelligence boss Richard Mdluli.

Mdluli had previously appointed Ntlemeza to investigate, in 2009, the 1999 murder of Oupa Ramogibe, who had married an ex-girlfriend of Mdluli’s. Ntlemeza unsurprisingly exonerated Mdluli, a finding that Sibiya had questioned.

Ntlemeza had been angry that Sibiya’s team “questioned your report with a view to determine whether you defeated the ends of justice or not whilst you apparently covered for Lieutenant-General Mdluli”.

This is the same Mdluli who former NPA prosecutor Glynnis Breytenbach was investigating before her illegal suspension. She too, along with former KZN Hawks head, Johan Booysen (who was also illegally suspended), have had charges reinstituted.

No politics here, move along.

Ntlemeza featured in another key role in a separate case heard in the North Gauteng High Court, also on Friday, brought by civil society lobby groups, the Helen Suzman Foundation (HSF) and Freedom Under Law (FUL). Judgment in the application by FUL and the foundation, whose offices were mysteriously raided and computers and documents stolen a few days after they had initially filed the application to have Ntlemeza suspended and challenging the lawfulness of his appointment, was reserved by Judge Neil Tuchten who heard the matter.

Sibiya has claimed that since 2013 police intelligence have been waging a campaign to have him as well as former Hawks boss, Anwa Dramat, whom Ntlemeza replaced, suspended and removed. According to Sam Sole, writing for amaBhungane, this all relates back to a 2011 letter that Mdluli, who was by then on suspension, had sent to President Zuma informing him that Sibiya and Dramat were pushing on with their investigation into abuses in crime intelligence and Richard Mdluli in particular.

“His spies, Mdluli told the president, reported that Dramat had said to General Shadrack Sibiya, the head of the Hawks in Gauteng, that he, Dramat, was not going to be diverted from his investigation of abuses in crime intelligence by anyone, ‘even the president’, because he was simply ‘doing his work’.”

In a bid to stall his own suspension in March 2015, IPID Head, Robert McBride, who was investigating the Zimbabwean rendition charges against Dramat and Sibiya, revealed in court papers that Minister of Police Nathi Nhleko had charged that McBride had “tampered with evidence” in removing a data 6 encrypted fax line from Sibiya’s office at the Hawks headquarters in the Joburg CBD.

Nhleko suggested that McBride had done so to access “evidence” that would incriminate him [McBride] as well as Sibiya and Dramat. The Minister of Police has refused to accept an IPID (under McBride) finding that neither of the top cops were involved in the illegal rendition. McBride was, however, legally entitled to remove the device particularly as two crime intelligence officers were intending to sniff around Sibiya’s office.

Dramat was suspended by Nhleko in 2014. It was a suspension that Judge Bill Prinsloo found on 23 January 2015 to have been illegal and invalid. The court also found that Nhleko’s decision to appoint Ntlemeza was unlawful and invalid. Nhleko spent taxpayer’s money challenging the ruling but lost, with costs. Dramat later accepted a “settlement”, a decision that was described by Helen Suzman Foundation director Francis Antonie as “corrupt”.

Dramat, who was investigating several “sensitive” cases, including the public spending on Nkandla, was forced to hand over all his dockets to Lieutenant-General Vinesh Moonoo, Divisional Commissioner of the South African police Service’s Detective Service. Investigator Paul O’Sullivan has been investigating Moonoo and since 2014 has lodged several charges of corruption, fraud, racketeering and defeating the ends of justice against Commissioner of Police, Lieutenant-General Khomotso Phahlane, Moonoo as well as Ntlemeza.

Nothing has come of these charges except of course O’Sullivan’s arrest on 1 April when he was dragged off a plane in front of his children at OR Tambo airport. It has now been revealed by Rapport that the posse of law enforcement officers were members of Moonoo’s National Investigation Unit.

A SARS investigation found that Huang, his wife and at least eight companies owe more than R1bn in tax. Huang accompanied President Jacob Zuma on a state visit to China in 2010 and is also a former business associate of the president’s nephew, Khulubuse Zuma.

In 2012 the Hawks in KwaZulu-Natal (remember, Johan Booysen was once the Head) secured a warrant for the arrest of Huang in relation to his alleged links to a multibillion-rand racket at Durban Harbour.

A forensic inquiry into Moonoo’s daughter, attorney Manitha Naran, revealed that the telephone number she listed for her workplace turned out to be for Huang’s offices. She has subsequently joined the legal firm, Chen & Lin Attorneys, where according to the firm’s website she is “is currently involved in advising clients in a matter where the disputed claim is in excess of R500,000,000 (Five Hundred Million Rand)”. The client in this claim, says a source close to the investigation, is Huang. The law firm is located in the same building as Huang’s Mpisi group in Bedfordview.

No politics here, move along.

Sibiya’s suspension in September 2015, as well as that of IPID head Robert McBride the same year were also found by the courts to have been unlawful. McBride successfully challenged Nhleko’s powers in the Johannesburg High court which found that while it agreed that the minister had the power to suspend McBride, the lack of parliamentary oversight rendered IPID a “paper tiger” with regard to combatting police corruption.

The Constitutional Court will hear arguments on this matter on 17 May.

Meanwhile we take it that McBride, who is facing charges of fraud and defeating the ends of justice, still has the encrypted fax machine that some would like to get their hands on in order to decrypt its secrets.

So far the Thin Blue Line (an emblem representing police collegiality) has come up against the Thin Black Line of the judiciary. Bids by the Minister of Police to appeal against court judgments have been over-ruled several times.

In the dock are not hardened criminals or underworld bosses, but public servants who claim to respect the rule of law and are simply doing their jobs. That Ntlemeza can lobby for a jet and/or a helicopter and more funds while swearing with a straight face that the Hawks are not being politically motivated, is completely undermined by the alarming facts that are out in public and that have been exposed in numerous cases currently playing out in the country’s courts – our final refuge. DM