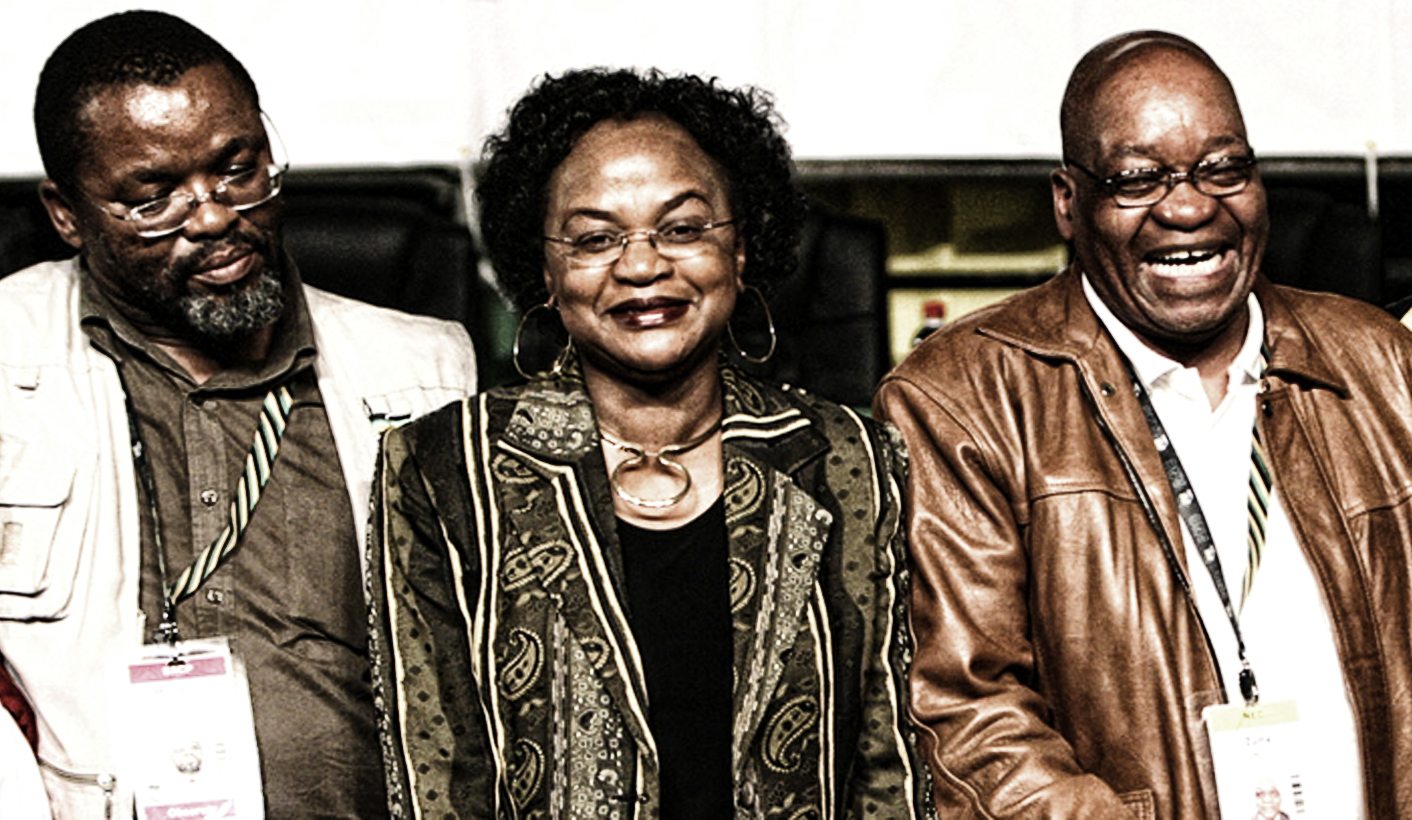 It is not often that the president makes a special address to the nation. On 5 December 2013, President Jacob Zuma stood in the press room at the Union Buildings and he told us our beloved Nelson Mandela had passed on. On Friday night, Zuma was at the same podium to play us for fools. Later that night, the ANC secretary general Gwede Mantashe commended Zuma for treating the nation like idiots. On Sunday, National Assembly Speaker Baleka Mbete insulted our collective intelligence and waved off the Constitutional Court as if it was her advisory committee. These same three people will dictate the ANC’s response to the judgment. So instead of shame, remorse and corrective action, there will be continued disrespect. By RANJENI MUNUSAMY.

On Monday, the ANC will hold an extended national working committee (NWC) meeting to discuss last week’s Constitutional Court judgment on the Nkandla scandal. In his media briefing on Friday night, ANC secretary general Gwede Mantashe explained that the national executive committee (NEC) was only scheduled to meet in May. Therefore it was decided at a meeting of the top six ANC officials to call an “extended” NWC meeting on Monday. An extended NWC meeting means any NEC member who wishes to attend could do so.

This might all appear to be about logistics. It is not. In September 2008, the NEC was convened a week after the Nicholson judgment in the Pietermaritzburg High Court because the ANC was gunning for former president Thabo Mbeki.

An NEC meeting has the powers to sanction or even recall the president. The NWC, extended or not, cannot do so. So even if NEC members attend Monday’s meeting en masse and speak strongly against President Jacob Zuma’s conduct on the Nkandla matter, the NWC will only be able to submit a report on this to the next NEC.

So just like in December when former Finance Minister Nhlanhla Nene was fired, no urgent NEC meeting will be called. By the time the NEC does meet, they hope the storm would have passed and focus will have shifted to preparations for the local government elections. Although the NEC is overrun with the president’s toadies, sentiment against him is shifting, as was evident when the committee dealt with the capture of the state by the Gupta family two weeks ago. It would therefore be risky for the leadership to call another NEC meeting when the Nkandla issue is on the boil.

As usual Zuma is able to wriggle out of responsibility and accountability by hiding behind structures and procedures. By addressing the nation after Thursday’s damning Constitutional Court judgment, which found that he breached his constitutional duties and ordered him to pay back the state for a portion of the security upgrades at his Nkandla home, Zuma gave the impression that he was treating the matter with seriousness. He had earlier met with the other top five leaders of the ANC and locked them into a sham process, which saw the secretary general affirming Zuma’s half-baked apology.

When the top six met earlier on Friday, they would not have known the exact wording of Zuma’s statement and would only have received the assurance that he would apologise.

Zuma did not apologise for the money spent on his homestead, his defiance on the issue, his refusal to acknowledge the benefits that he and his family had derived, the damage caused to the image of the government he leads, his scorn in Parliament when asked questions about Nkandla, the fact that Parliament was turned into a circus because of him or that his handling of the Public Protector’s report was wrong. He did not even apologise to the ANC for bringing it into disrepute.

What Zuma said was: “The matter has caused a lot of frustration and confusion, for which I apologise, on my behalf and on behalf of government.”

And as usual, Zuma blamed others for what went wrong. “I wish to reiterate that any action that has been found not to be in keeping with the Constitution happened because of a different approach and different legal advice.” He also said there was no deliberate effort or intention on his part to subvert the Constitution.

So although Zuma had been advised repeatedly by Public Protector Thuli Madonsela to go to court if he wanted to review her findings, been hammered publicly and in Parliament for his handling of the Nkandla matter, and had even been advised by people in his own party to pay back the money, Zuma would have us believe that he was bound by the legal advice he received and did not know he was flouting the Constitution.

Now that the ANC has accepted his explanation and apology, it will be difficult to take another position. Mantashe addressed the media about half an hour after the president spoke and had to affirm whatever Zuma said, whether the wording was to his satisfaction or not. It was also Mantashe who had to face a barrage of questions from the media, while Zuma simply delivered his statement to a camera and sauntered back to his office. That is the wily operator that Zuma is.

In Mantashe’s clumsy stomp through the issues, he claimed that the Constitutional Court had not granted the Economic Freedom Fighters the declaratory order they had sought that Zuma had acted in contravention of the Constitution. Chief Justice Mogoeng Mogoeng made the effort to explain in the judgment why he had to make the order, and not grant Zuma’s advocate’s request to refrain from doing so:

“Unlike the discretionary power to make a declaratory order in terms of section 38 of the Constitution, this Court has no choice but to make a declaratory order where section 172(1)(a) applies. Section 172(1)(a) impels this Court, to pronounce on the inconsistency and invalidity of, in this case, the President’s conduct and that of the National Assembly.

If Mantashe overlooked something spelt out so clearly in the judgment, one wonders what kind of discussion he and the other officials had with Zuma. How were they able to interrogate the full impact of the judgment on the ANC and the country when they did not even read the judgment properly or had proper legal advice on it? How were they able to manage Zuma and the ANC’s response to the Constitutional Court when the order situated both at the top and bottom of the text of judgment, spelling out the main points, went unseen?

It could be, however, that the officials only remembered the parts of the judgment that were useful to them. That certainly would explain National Assembly Speaker Baleka Mbete’s response during a media briefing at Parliament on Sunday. Mbete said the judgment contained “most welcomed lessons that will serve to guide our processes and approach in handling reports of chapter nine institutions in future”.

Throughout the media briefing by Parliament’s presiding officers, there was no mention of the fact that they had challenged the application in the Constitutional Court to defend their handling of the Nkandla report. It was as if Parliament had requested the Constitutional Court judges to advise them on the Public Protector’s powers and were now thanking them for the “clarity” they provided.

There was also no mention of the fact that the Constitutional Court had found their actions to be “unlawful”. Mbete actually made the ridiculous assertion that the court’s finding that the National Assembly’s conduct was “inconsistent” with the Constitution was different from saying it “violated” the Constitution.

Mbete also said there was no need for her to apologise or resign. In a pummelling from journalists at the media briefing, Mbete questioned why she would need to apologise to Madonsela for the way she was treated by Parliament. “I don’t know who owes the public protector an apology. About what?”

Regarding her own position, Mbete said: “May I also publicly say I’m not resigning nor do I believe there will be a reason shortly to decide to resign. I’m not considering resigning.”

The three people who addressed the nation on the judgment on behalf of government, the ruling party and Parliament will now also sit in Monday’s NWC meeting holding the same line. The only thing Mantashe said at the media briefing that could provide an escape clause for the ANC was that the party had advised the president to take both the Public Protector’s report and the government task team’s report on judicial review to reconcile the two. This was not done, he said.

For all else, the ANC was complicit in defending the actions of the president and attacking Madonsela, both through the parliamentary caucus and public statements by the officials. Any hope that the ANC leadership could distance itself from Zuma on the Nkandla matter and therefore take some punitive action against him is now just a wishful thinking.

The only way that Zuma could face any consequences from the ANC is if the matter is opened to the broad membership. These would be people not beholden to Zuma for their jobs or not complicit in his ruinous leadership of the ANC and the state.

Former Umkhonto we Sizwe commanders and commissars had recently made a call in a memorandum to the ANC for the special national conference to be convened. This said the special conference was needed to assess the “challenges and chart a way forward to restore the prestige of our glorious movement and the State”. They made the call in response to revelations about the Gupta family’s interference in affairs of the state and improper influence over Zuma. While there is growing anger in the ANC and the alliance about the Gupta issue, any action against Zuma is virtually impossible for as long as the matter is left to the officials and the NEC.

According to the ANC constitution, “a special conference of the ANC may be convened by the NEC at any time or at the request of a majority of the provinces for the stated purpose or purposes”. If pressure builds from the ground, the five ANC provinces that are not part of the “premier league” faction aligned to Zuma could request the special conference. A special conference could have the power to remove Zuma as ANC president, thus eliminating all the reasons why he cannot be recalled as state president.

In the absence of this taking place, Zuma seems determined to see his presidency to the full term, without any sense of shame or remorse about how his actions have denigrated the office of the state presidency and his own organisation. Other than having to pay back the money for a portion of the non-security upgrades, which is being determined by the National Treasury, it seems Zuma might get away with the Nkandla scandal without any consequences.

Zuma, Mantashe and Mbete showed utter disrespect for the people of South Africa this weekend, undermining people’s intelligence and ridiculing the constitutional principles that the Chief Justice so eloquently spelt out last week. They are perhaps fortunate that South Africans are too scandal fatigued and immobilised to display their anger. When the contempt they have shown is returned, perhaps our dishonourable leaders might finally confront their shame. DM