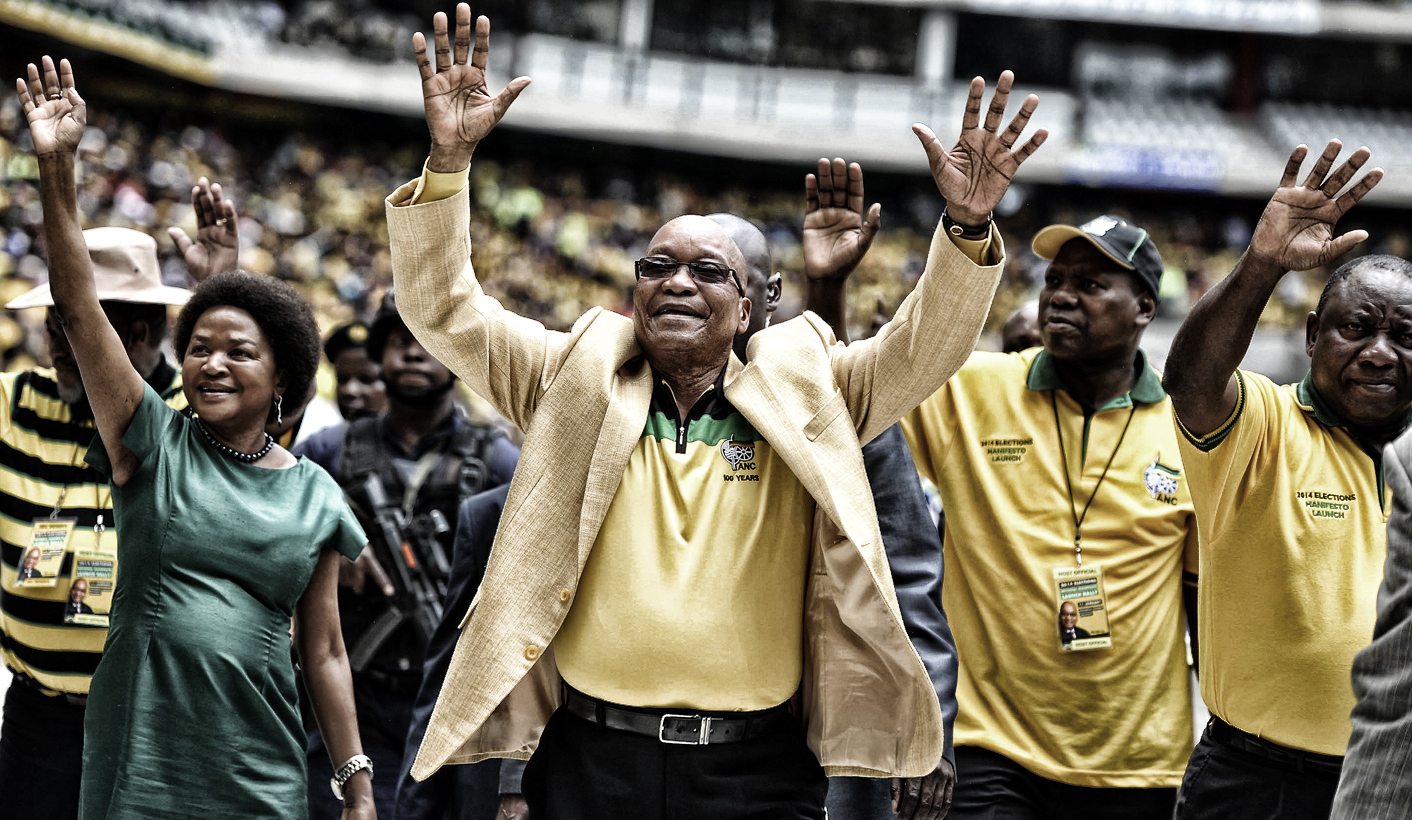 It might not have seemed like it at the time, but South Africa may have fundamentally changed on Friday night. President Jacob Zuma’s nonresignation, nonapology, may be the start of a process that leads to a very real political change in our politics. While Zuma is secure within the ANC walls, he is challenging the voters’ credulity to its limit. At the same time, trust in one of the most important politicians of our time, Gwede Mantashe, is now thrust at its lowest ebb ever. As he tries to take hold of the outrage at Zuma and control the chaos, the actions of the SACP and the audience at the Cape Town International Jazz Festival suggest that the current anger could be a tiger even Mantashe cannot control. By STEPHEN GROOTES.

We’ll probably never know why Zuma and the people around him decided to raise expectations so high on Friday night. There was no need to do his live nonresignation so hurriedly and with so little notice. And arranging it like that made it look as if something dramatic was about to happen. Certainly not a mealy-mouthed apology that did not go nearly far enough. And Zuma’s repeated claim that he “acted in good faith” was met with guffaws around the country.

That laughter would have been the loudest in Gauteng. There, urban, educated voters, with access to a variety of media, have known about the Nkandla scandal for a very long time. Radio stations have taken more calls about that village than any other issue in the last four years. Many people have already asked what the consequences of this could be at the local government elections. They have to be held by 16 August, even though there are serious complications with the Independent Electoral Commission because of the Tlokwe issue. Some may even go so far as to suggest that the ANC might now lose Tshwane, as well as the Nelson Mandela Bay Metro.

It’s hard to say at this point, but local elections do have lower turnouts than national and provincial polls. Which may mean that the voice of those who vote almost as a form of protest against Zuma and the ANC he’s come to define will be amplified. Julius Malema was probably Friday night’s big winner.

But the real damage this will do to the ANC is in Gauteng as a province. It bears repeating that the party only won the province with 53.69% of the vote in 2014. Despite the Gauteng ANC’s best efforts, it is surely still defined in much of the public mind by the national ANC. Zuma’s behaviour, and more crucially, the party’s inability to call him to order in any meaningful way, may well be the final straw for the party’s hopes of keeping the province in just three years time.

The importance of the possible loss of Gauteng cannot be over-emphasised. Briefly: the ANC would become a rural party just as more and more people are becoming urbanised. The voice of rural provinces in the party will be louder than the urban provinces. That surely will have electoral consequences.

And the main person they have to thank is Zuma himself.

The other big loser from Friday night is Mantashe himself.

As the Secretary-General of the ANC he has played a crucial role in our politics since Polokwane. But despite all of the scandals surrounding Zuma, and the fact that corruption and incompetence have become so entrenched, for many he has been one person who seemed not to be, well, just not like that. He was someone who would do the right thing in a crisis. He was, by many – perhaps not all – trusted. For a politician, trust is a powerful weapon. It can be used to shut down critics, and to weaken your enemies. Without it, as Zuma is about to discover, you can become seriously vulnerable.

One of the reasons Mantashe had this trust, apart from being very personable and genuinely interested in people as individuals, was the fact that he could appear as angry as everyone else when a scandal erupted. When the Waterkloof scandal erupted, he complained loudly, he went on the radio and condemned all who were responsible. When it emerged the Gupta family had offered a ministerial post to Deputy Finance Minister Mcebesi Jonas, the outcome of the NEC meeting that followed was for Mantashe to hold an investigation. In recent days, any questions about whether people were coming forward with more information have been met with the response that “people are streaming in” with more allegations. As Secretary-General, Mantashe controls the communications machinery of the ANC, which means it is a deliberate attempt to raise expectations that something is actually happening around state capture investigation.

But now, after the post-ConCourt decision performance, this all may appear to be an elaborate attempt to control the outrage, to tamp it down over time and direct it, to make sure that the sting of the criticism against Zuma and the party is eventually neutered. (Either that, or Mantashe is playing a much longer game then many would deem possible.) This is why Zuma, the ANC and National Assembly Speaker Baleka Mbete (who on Sunday praised the Constitutional Court’s Nkandla judgment) are all taking such pains to be so polite to the ConCourt, even in a most superficial way.

It is a deliberate and cynical strategy to take the heat off themselves and Zuma, to bat with the spin rather than against it.

This then suggests that Mantashe’s primary aim is actually just to protect Zuma, again, unless he’s playing a seriously long game. For that, surely, he has to suffer some loss of trust from people who previously held him in high regard. It’s one thing to defend the party, but quite another to actively work to defend someone as obviously flawed as Zuma.

However, there are some suggestions that this strategy will not work this time. For one thing, it’s been used too often already, we can see through it this time. Second, even the people within the ANC and the alliance have actually just had enough.

Over the weekend the SACP itself came out and said that the “widespread positive public reaction” to the ruling meant the ANC needed to “seriously embark on a collective process of decisive introspection and self-correction”. While “decisive introspection” may be a little oxymoronic, the communists clearly want action, particularly because they say the implementation of the public protector’s Nkandla findings “will be a beginning, but self-correction must clearly go way beyond this”.

One of the other major ways South Africa could have changed is that frustration with Zuma could morph into public gestures aimed against people seen as representing him. Previously, he himself has been booed at the FNB stadium, twice. The first was during Nelson Mandela’s memorial service, the second during a pretty average football match. On Saturday night, Arts and Culture Minister Nathi Mthethwa was booed off the stage at the Cape Town International Jazz Festival. Surely the only reason for this is his close association with Zuma. The people are obviously so frustrated that they will turn their anger on anyone seen as part of his posse.

The wonderful thing about booing someone is that it is hard to criticise. It is not a personal insult, it is not a threat of violence. It is a simple statement: “You are a disgrace.”

This surely means that the loss of legitimacy suffered by Zuma is now spreading to those he appointed, and it is likely to spread further into the ANC as well, right on time for the elections. But it also means that as Zuma is seen as not legitimate, his government will be seen as illegitimate too. And this could manifest itself in a general lack of respect for the state. It will be harder for officials to convince people not to burn down schools during service delivery protests, or to convince them that they must pay their taxes.

All of these dynamics could have longer-term consequences.

Strangely, Zuma’s defiance, his refusal to accept that the ANC is bigger than him and that the country is bigger than the ANC, is going to push South Africa into changing more quickly than it would have otherwise.

The question is how much lower will we go on the way to that change? DM

Photo: South Africa’s President and leader of the ruling ANC party Jacob Zuma (C) greets his supporters as he arrives for the launch of his party’s election manifesto at Mbombela stadium in Nelspruit January 11, 2014. REUTERS/Ihsaan Haffejee.