Booing Zuma: Is this the turning point? 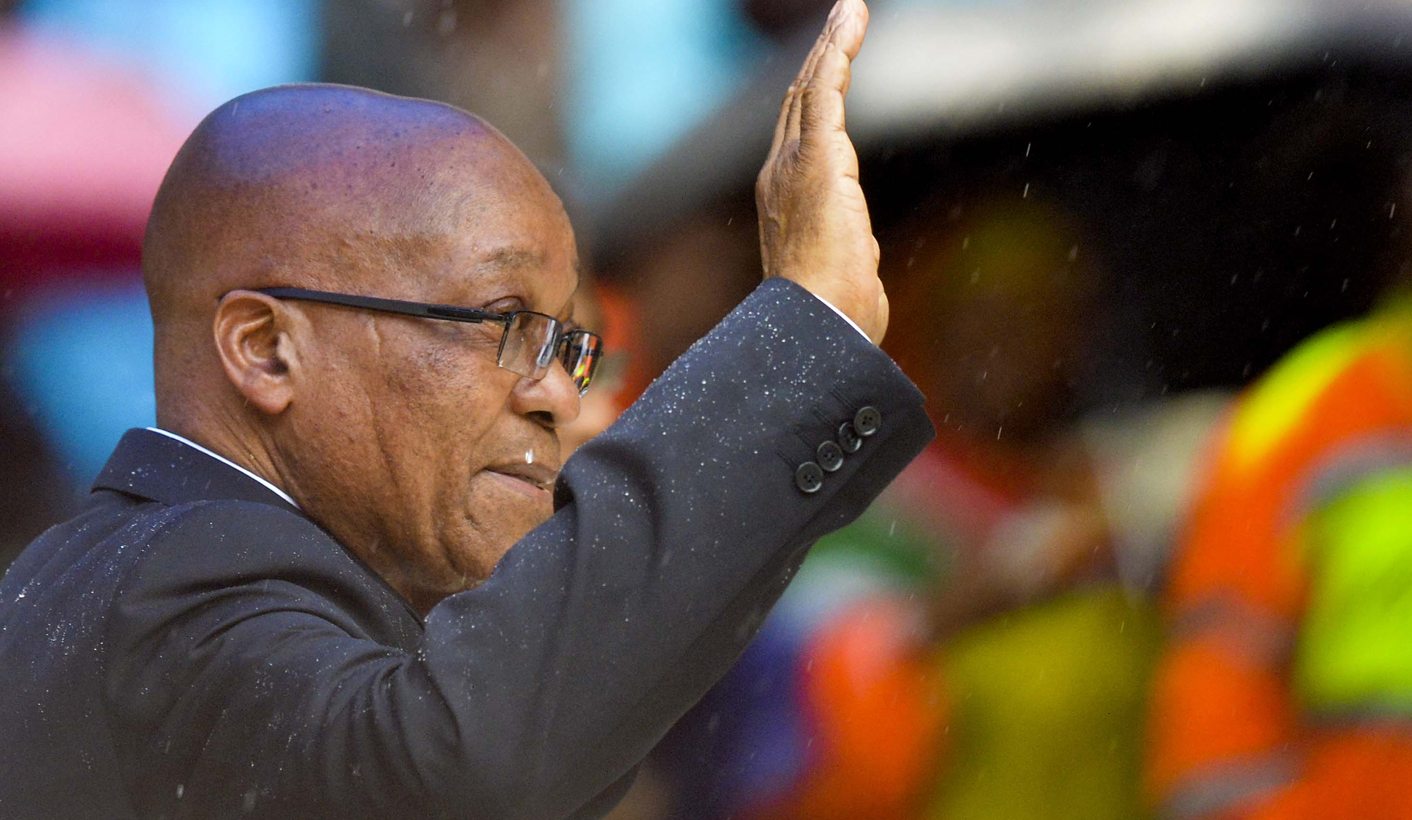 If there was one thing that could not have been predicted before Nelson Mandela Memorial Service, it was the booing of President Jacob Zuma. It was, like the rain, unscheduled, and, for some unwelcome. There will be debates around whether it was right, and proper, to boo during a funeral. One thing cannot be taken away though: the people who are frustrated and angry at Zuma at FNB stadium today are not your natural DA voters. By STEPHEN GROOTES.

There are moments in politics when something happens that really knocks you sideways. Something that no one saw coming. This was such a moment. The big set-piece event of saying goodbye to Madiba, the one time when we were all supposed to come together as a nation. Our present-day frustrations, our usual arguments with ourselves and each other were supposed to be put on hold. At least until the mourning period was over.

Instead, as Zuma’s arrival was announced at the stadium, sections of the crowd began to boo. Then they raised their hands over their head, rolling them over each other, which started as the “change/substitution sign” in football, and has come to mean political change here. Then the chanting. One word. “Mbeki”. (He too was in the stadium.)

Eventually the chanting died down and the service continued. Until the big screens showed Zuma again, and again the booing started. It became a game, wait for the screen, listen to the boo. Unkindly, when the screen picked up Barack Obama, the stadium erupted in a huge cheer, and then went back to Zuma. There auditory responses from the crowd could not have been more different.

Eventually, the big screen was turned off for a while. Then, while Obama was speaking the chant came back, but this time it went “screen, screen”. It was just too obvious, and so it was turned back on. After Obama, Master of Ceremonies (and the ANC’s Number Two to the country’s Number One) Cyril Ramaphosa called for discipline. In Zulu, he said what was translated to me as “Don’t embarrass us, we have overseas visitors here. We can deal with present day stuff once the visitors have gone”.

Imagine if he had said that in English.

At the end of the long-list of well-wishers, Zuma’s speech was announced. There was some booing, but it was drowned out by cheers. Then came the praise singer and the choir, which really fired up the crowd. By the time Zuma spoke, the booers had been thoroughly defeated. Or had just left, joining the crowds who departed after Obama finished.

There will be some people who will claim this is a turning point, that what happened at the FNB Stadium on Tuesday marks a major change in our politics. As City Press editor Ferial Haffejee tweeted, it seemed that people had come to say goodbye to two presidents, not one.

Certainly, this does mark some sort of turning point in our public discourse, in the language that we use in our politics. To be blunt, if people are prepared to show their frustration with Zuma, during the funeral of Nelson Mandela, imagine if it had been a mere sporting event.

So the gloves are off. Respect for the Presidency will not protect Zuma from this kind of treatment anymore. For someone who used to be met with rapturous ululation wherever he went, this is a huge change. Expect him to spend more time speaking in KZN than anywhere else for the near future.

His political handlers are also going to have to plan for this kind of eventuality in the future, and particularly during the election campaign. That Zuma has enemies is no secret. That they have the daring to disrupt Madiba’s funeral is something new. And if they feel that strongly, then they may well decide to do the same thing on the campaign trail, even if it does hurt the ANC in some way. Their hatred of Zuma could well outweigh their love for the ANC.

It’s important at this point to look at who was actually doing the booing. This was a long way from the rural poor. And it certainly wasn’t the urban white or minority. Rather, it was the middle-class black urban resident. The person who has the time, money and resources to take a day off, and get to the stadium. If you’re thinking I’m describing someone who looks an awful lot like the type of person who could have voted for Cope in 2009, you’re absolutely right. The point is, if this had been in KZN, or in the Eastern Cape, this probably wouldn’t have happened.

That said, there is another important dynamic that is playing out here.

One of the many defenses that Zuma uses, apart from the usual conspiracy crap, is an appeal to racial solidarity. It’s never explicit, but the sub-text is often there. A message that if you are not for us (us being the ANC and Zuma, as one identity), then you are against us, and against yourself, because you are black.

What happened on Tuesday was a complete rejection of that appeal to racial solidarity. There was no way that sort of argument would have worked on the people booing Zuma. They rejected him, they don’t like what he stands for and how he behaves, and no spin in the world will change their minds.

One of the other questions that arises out of this is an inevitable one in ANC politics. Was this planned? Was it a coordinated attack on the dignity of the President during the most high-profile (and highly-exposed) moment of his career. Just when the international stakes are at their highest. And if so, by whom?

The fact this was held in Gauteng could immediately point a finger of suspicion at the Gauteng ANC. They are no fans of Zuma, backed Kgalema Motlanthe at Mangaung, and have been strong enough to make sure none of their people have been purged by Zuma since that conference. They may lost the fight, but the war continues. Of course, there’s no proof it was coordinated, or that it was the Gauteng ANC.

But, if I were Zuma, it might be worthwhile to find a way to make the claim publicly. It would put the pressure back on them, to explain why they used this funeral to make this particular political point. And even if it wasn’t them, it would still put an enemy under pressure.

In the end, this sort of behavior did diminish the memorial service of Nelson Mandela. I will always be sad about that. No doubt it will be argued that as a democrat, he may not have minded too much. It still diminished the occasion. And that diminishes all of us as South Africans.

Just like Jacob Zuma sometimes does, as our President. DM

Grootes is an Eyewitness News Report, and the host of the Midday Report on Talk Radio 702 and 567 Cape Talk.