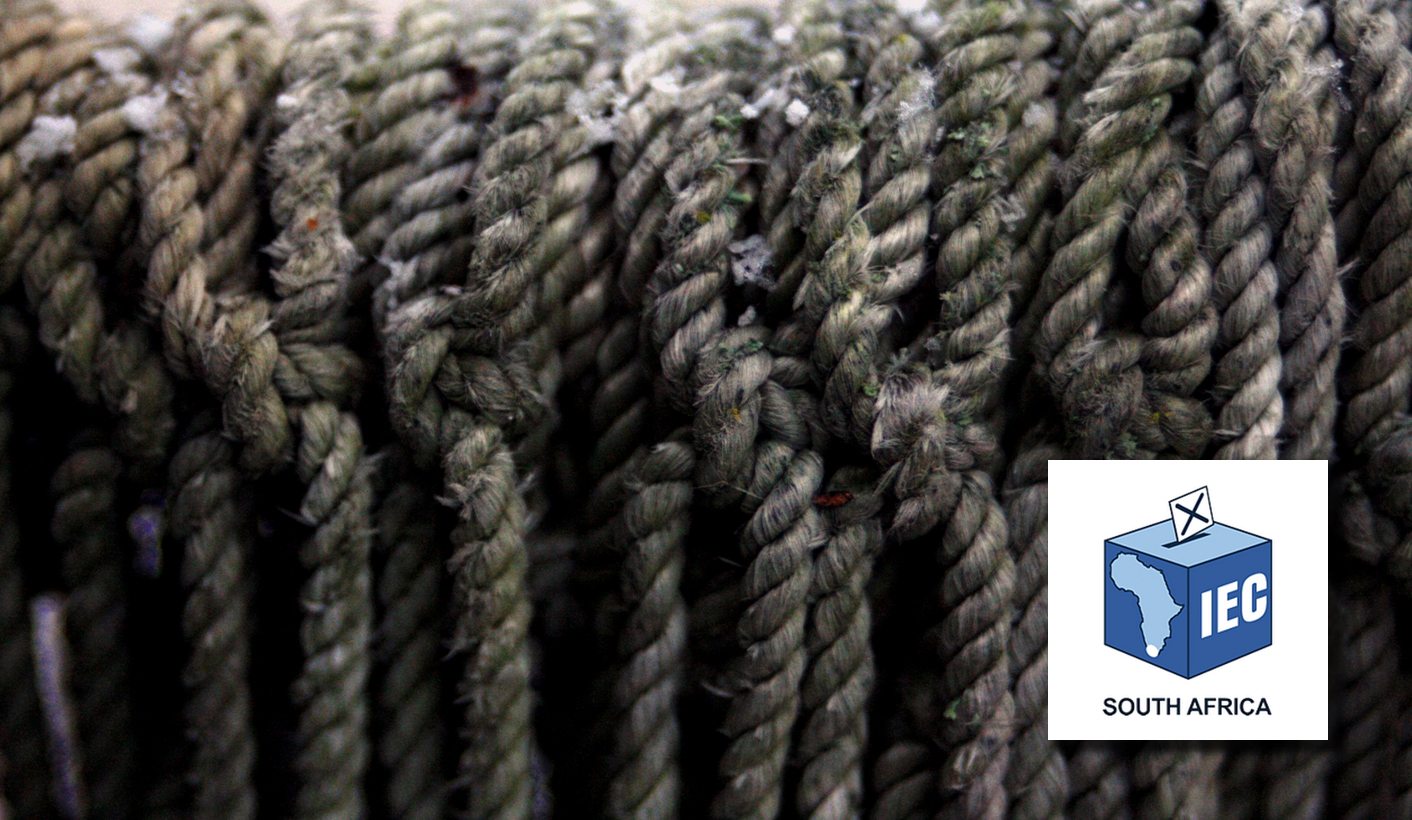 With so much of the political posturing currently on display by the political players, it is sometimes missed that this year’s local government elections are in grave danger. The Tlokwe case, soon to be argued before the Constitutional Court, could reach a conclusion where judges decide it is not possible to hold a free and fair election in South Africa right now. It may not have seemed so just two weeks ago, when the Independent Electoral Commission submitted its papers, but the arguments submitted by the independent candidates who started this whole process are seriously strong. This is a Gordian Knot that will require all the wisdom of our Constitutional Court judges to untangle. By STEPHEN GROOTES.

Two weeks ago, just hours before Mcebisi Jonas started another national convulsion by confirming what we already knew, the Independent Electoral Commission (IEC) submitted papers to the Constitutional Court in the Tlokwe case. Technically, this is the IEC appealing against an Electoral Court judgment. That judgment ruled in favour of a group of independent candidates from Tlokwe, who said the IEC had not complied fully with an earlier Constitutional Court ruling (in a case referred to as “Kham” after Xolile Kham, the candidate in whose name the first case was brought), which specified it must include the addresses of voters on the voters’ roll.

That ruling was careful to talk about people registering to vote in the future, from the date of the ruling, and said there must be “sufficient particularity” about the address given by the potential voter, so as to ensure that that voter was not cheating. The reason these candidates brought all of these cases is that they believe the ANC was trying to move voters around to make sure it won particular wards in Tlokwe by-elections.

In its application the IEC made several major points, but said first that it would not be possible to comply fully with the Kham judgment and hold local government elections this year. It said that it would take until about 2020 to get all of the address information specified, and that it had a duty to ensure that no one lost their right to vote through all of this. At the time, many people, including this reporter, thought they had a strong case. It’s almost unanswerable: everyone must have the right to vote, and no one should lose it through some legal red-tape palaver.

Well, I can’t remember the last time my view on an issue has changed so quickly.

It’s a simple argument really, summed up in the candidates’ papers like this:

“There is simply no substance of having the right to vote, in the widest sense possible, if such right is to be exercised in rigged elections. Voting becomes a mere formality with a certain outcome.”

“It is tantamount to reducing the important local government elections, due in 2016, and the General Elections, due in 2019, to a formality, where the constitutionally-enshrined right to participate in free and fair elections should be sacrificed at all costs on the altar of the right to vote.”

It’s a pretty simple argument. What’s the point in having the right to vote if the whole thing is rigged in the first place? Why bother?

One of the major frustrations these candidates have, and it comes through in fairly abrupt legal language, is with how the IEC just doesn’t seem to care about the possibility of this fraud occurring. The nature of these elections is important in local government polls: one of your two votes is for your ward, the geographic space in which you live. The concern these candidates have is that people will be moved into certain wards to ensure they vote for a particular party, and that party will retain the control of certain councils as a result.

There is also a very strong criticism of the lack of effort the IEC has made in trying to deal with this issue. The candidates’ attorneys did a simple thing, they used the information they had available, from various databases, and were able to come up with addresses for a random sample of voters. But the frustration clearly shines through when they point out that “more strikingly, some of the addresses confirmed the fears of the Independents (the candidates) that these people are not resident in the wards where they are registered”.

They also point out that which every South African knows, to get a cellphone SIM card you have to be able to provide proof of address. And the requirements there are actually stricter than the requirements the Constitutional Court has spelt out for the voters’ roll. They also say there are various maps and tools available, including Google Maps, that can be used to help voters show officials exactly where they live. This, they say, will make it easy for people who cannot read to explain where they live, and provide the “sufficient particularity” that the judges have previously asked for.

Time and time again in these papers comes through a perfectly legitimate complaint that the IEC is simply not even bothering to try. They “find it very interesting to note” that through all of the advertising by the Commission to encourage people to register to vote, there has been no warning that the Commission “might not have an address for them that could bar them from voting or urging voters to update information with the Commission. One would expect that the Commission, knowing that it faces this predicament, would have done so”.

It is actually amazing, this. The IEC has known about this issue for some time. Surely, as a precaution, it would make it clear to voters that this is an issue, and at least make sure it gets all the information it can from people during its registration weekends.

And that means it’s probably right for the candidates to accuse of the IEC of wanting to “hold the same court and the country at ransom to rectify its mistakes”. The IEC is also accused of trying to “literally ambush the above Honourable Court to succumb to the pressure of offering a devastating and unrealistic solution for a problem the Commission has created for itself in its failure to implement and comply with the relevant provisions of the Electoral Act over a period of several years”.

That’s strong stuff. And it makes the point that it’s only the fault of the IEC that it has not done what it should have done 13 years ago, when the current voting legislation was brought in.

To go through this argument is, for me at least, to be swayed pretty strongly in the direction of the candidates. But there are several massive problems that this case may generate. First, the Constitution is clear, we have to have elections by 16 August this year. (Sure, we don’t all turn into pumpkins the day later, but some will say we might turn into a banana.) Second, the IEC is bound to say that for all of this argument to hold weight, it has to be shown that vote-rigging is going to occur. But that is probably not the point – the point is to make sure that it will not occur, and that the IEC is following the law.

And no doubt the IEC will simply say it has no choice, it doesn’t have the time and the resources, even using Google Maps, to fully comply with the Constitutional Court’s Kham ruling, as interpreted by the Electoral Court.

But the judges will surely be right to feel that they are being held to ransom here, that the IEC is not playing fair. And that it should not be allowed to get away with it. The question then, as always, is what then? Could they really put the local government polls on hold? Could they go ahead with a flawed election? Or will they do what South Africans always do, come up with some fudge and hold our collective thumbs?

This is turning out to be a very important case indeed. For our democracy, for our people, the future may be decided by the way top judges of the land untangle the small case from a small city in the north-west corner of South Africa that over the years grew into a Gordian Knot, all but impossible to solve gently, or wisely. DM

Photo by GollyGforce – Living My Worst Nightmare, via Flickr.