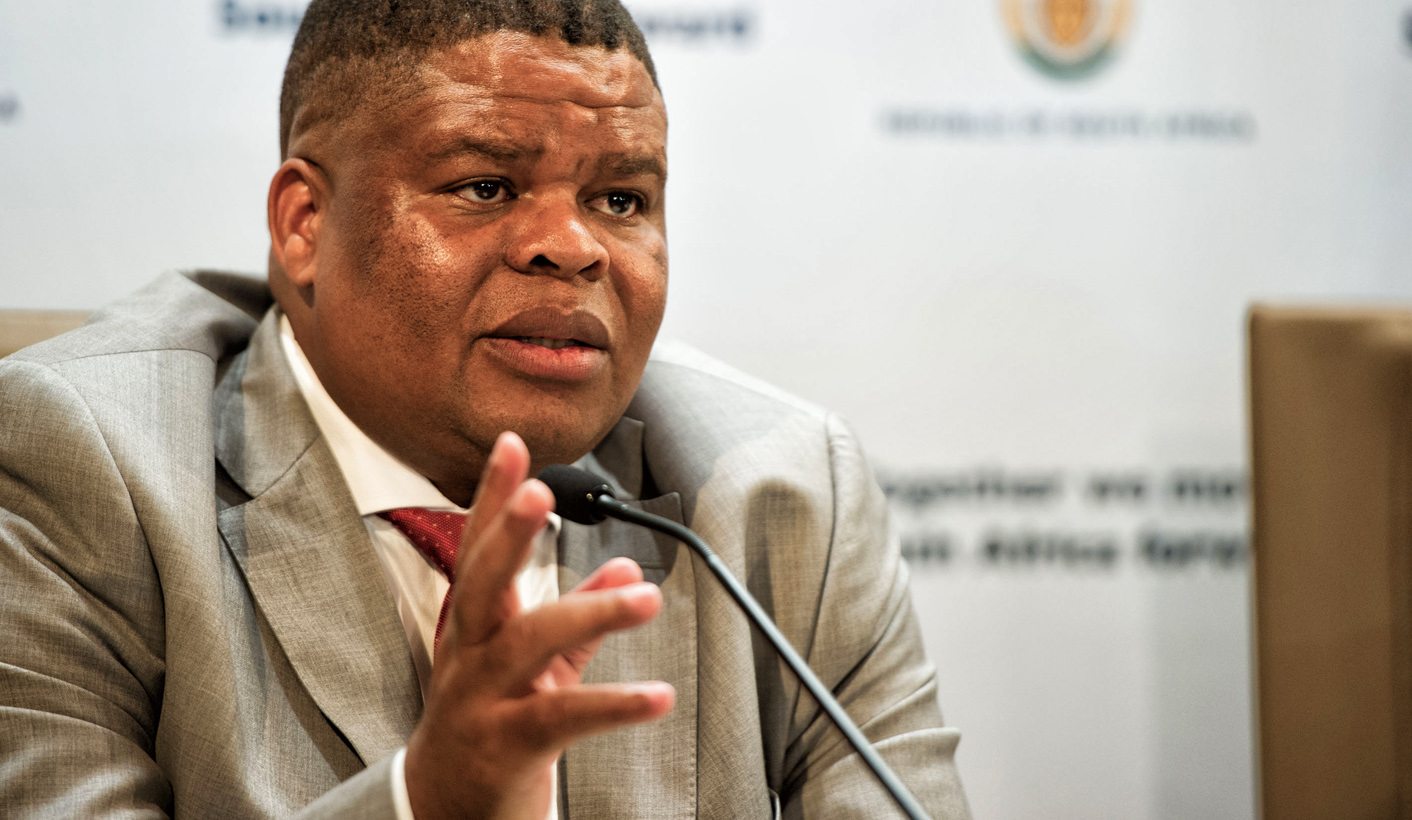 While the nation has been caught up in the meaning and implications of the Constitutional Court ruling that the President and National Assembly had violated the Constitution, alarming details have emerged in a Cape High Court challenge of Government’s secret nuclear deal with Russia which also potentially violates the Constitution. EarthLife Africa and the Southern African Faith Communities Institute have revealed that Minister of Energy Tina Joemat-Petterssen has attempted to illegally sidestep advice by the state law adviser with regard to the crucial public participation process. By MARIANNE THAMM.

EarthLife Africa (ELA) and Southern African Faith Communities Environment Institute (SAFCEI) on Wednesday lodged papers in the Cape High Court revealing how Minister of Energy Tina Joemat-Petterssen had ignored advice by the state law adviser that a nuclear procurement deal with Russia had significant financial implications and had to be debated publicly before it could be adopted.

That Joemat-Petterssen tabled the agreement in terms of section 231.3 of the Constitution instead of section 231.2, which the state law adviser had advised, and that would require parliamentary approval, could be viewed as unconstitutional, ELA/SAFCEI lawyers have argued.

“The manner in which the minister tabled the agreement, against the advice of her own legal advisers, is that it locked South Africa into a 20-year deal with Russia, without any public debate over whether the country can actually afford it or not. Such a consultation process, including public hearings, could have taken place had the Russian IGA been tabled as required by section 231.2 of the Constitution, where parliamentary approval is required,” said Liz McDaid, a SAFCEI representative.

ELA and SAFCEI highlighted that with regard to the purchasing of nuclear reactors Joemat-Petterssen had made the public assurance that there would be “a transparent, fair process” but that documents uncovered by the organisations as part of their court action reveal “a very different story”.

The 2013 exploratory memorandum from the state advisor has only now been revealed and shows that “the Russian agreement is to build reactors and an enrichment plant, and that other subsequent agreements would cover the details of how it is to be financed, not if it would go ahead. The Russian agreement would obviously have significant economic and other implications for the country and therefore required parliamentary approval”, said ELA/SAFCEI.

According to records provided to the lobby groups, the state law adviser also advised that the agreement required parliamentary approval and should be tabled under section 231.2 of the Constitution.

“The minister tabled it in Parliament in terms of section 231.3, thereby sidestepping the public participation that would have been required during the process of parliamentary approval. There is no explanation of why the minister chose to ignore the state legal adviser’s advice.”

Government had originally announced that the Russian agreement was a “done deal” but later backtracked after a public outcry. But President Jacob Zuma subsequently declared that South Africa would build nuclear reactors “on a scale and pace that our country can afford”.

The case by SAFCEI/ELA, initiated in October 2015, has been characterised by delays resulting in the organisation’s lawyers, Adrian Pole and Associates, racking up legal fees to obtain crucial documents and chasing government respondents.

“The government, in the form of the Department of Energy (DoE), the president, and the National Energy Regulator of South Africa (Nersa), have acted with glacial slowness and failed to supply the relevant government records according to the time frames of the rules of court,” said SAFCEI/ELA.

Part of the papers submitted to the court contain the November 2013 exploratory memorandum on the draft Russian deal from the state law adviser, stating clearly that the deal was “intended” and “understood as creating a firm commitment that Russia would construct the required nuclear plants in SA”.

The legal implications of the state law adviser’s memorandum is that the deal, because of the massive budgetary implications, needed to be debated before being signed.

In the High Court matter SAFCEI/ELA have requested the court to declare the inter-governmental agreements on nuclear energy signed in 2014 as unlawful.

“ELA/SAFCEI maintain, as per our founding papers, that the Russian agreement was entered into unlawfully but makes (an) internationally binding commitment to buy a fleet of nuclear reactors from Russia.”

SAFCI/ELA said the nuclear deal had been characterised by secrecy and lack of transparency and that the scanty records it had revealed that the Minister of Energy had made a determination (in terms of section 34 of the Electricity Regulation Act) that new nuclear energy was needed, and then had kept it secret for two years, only releasing it finally in December 2015.

“One of the reasons for releasing when they finally did, in December 2015, was to undermine the SAFCEI/ELA court case.”

Section 34 of the Act requires that Nersa make decisions in concurrence with the Minister of Energy and that such decisions must be in the public interest, require public participation and must be publicly available.

“The records finally released show Nersa’s failure to reveal that they and the Department of Energy had between them agreed to procure nuclear power. The SAFCEI/ELA legal team asked Nersa directly, before launching the court action, whether any Section 34 determination had been made. Neither Nersa nor the minister admitted until this litigation that the determination had in fact been made in 2013.”

Earthlife representative, Dominique Doyle, said Nersa was meant to be the regulator to safeguard the public interest, “but the manner in which our lawyers were forced to extract information from Nersa, rather than their giving it to us voluntarily, does them no honour”.

According to records obtained during the litigation process, Nersa had based its decision on the outdated IRP2010, but acknowledged overstated electricity demand forecasts, doubling of nuclear costs, and negative impact on future electricity prices, but still approved the nuclear build.

“Governance processes are in place to ensure ethical, fair, and transparent decision-making,” stated SAFCEI Executive Director, Venerable Ani Tsondru. She added, “The government’s failure to follow the rule of law in this nuclear case creates a deeply concerning impression that these officials and politicians consider themselves above the law”.

The refusal by Finance Minister Pravin Gordhan (before he was succeeded by Nhlanhla Nene) and Energy Minister Ben Martins to sign the agreement was reportedly triggered by the opinion of the state law adviser. Opposition by these ministers and other senior officials delayed the signing of the agreement for a year until September 2014 when Joematt-Petterssen signed a new deal with Rosatom in Brussels.

On 23 August 1995, President Nelson Mandela signed off an agreement between South Africa and the US “concerning the Peaceful Uses of Nuclear Energy… to be entered into with the United States of America.”

In 2014 the Department of Energy said these seemingly polygamous nuclear co-operation agreements signed over the years did not bind South Africa into buying reactors from any of the countries, but merely indicated “what was on offer”.

On 9 December 2015, just hours before Nhlanhla Nene was fired, President Zuma’s Cabinet approved the 9,600MW nuclear procurement programme, paving the way for nuclear vendors to present proposals in March 2016 to build six to eight nuclear reactors, at an estimated cost of between R800-billion and R1.6-trillion.

It is no surprise that the President’s close friends, the Gupta family, stand to benefit in supplying uranium through the family’s majority stakeholding in Shiva Uranium.

However, it is the binding nature of the secretive Russian 20-year deal – as various legal experts have pointed out – that is now under the spotlight and that might also, in the long run, end up in the Constitutional Court. DM