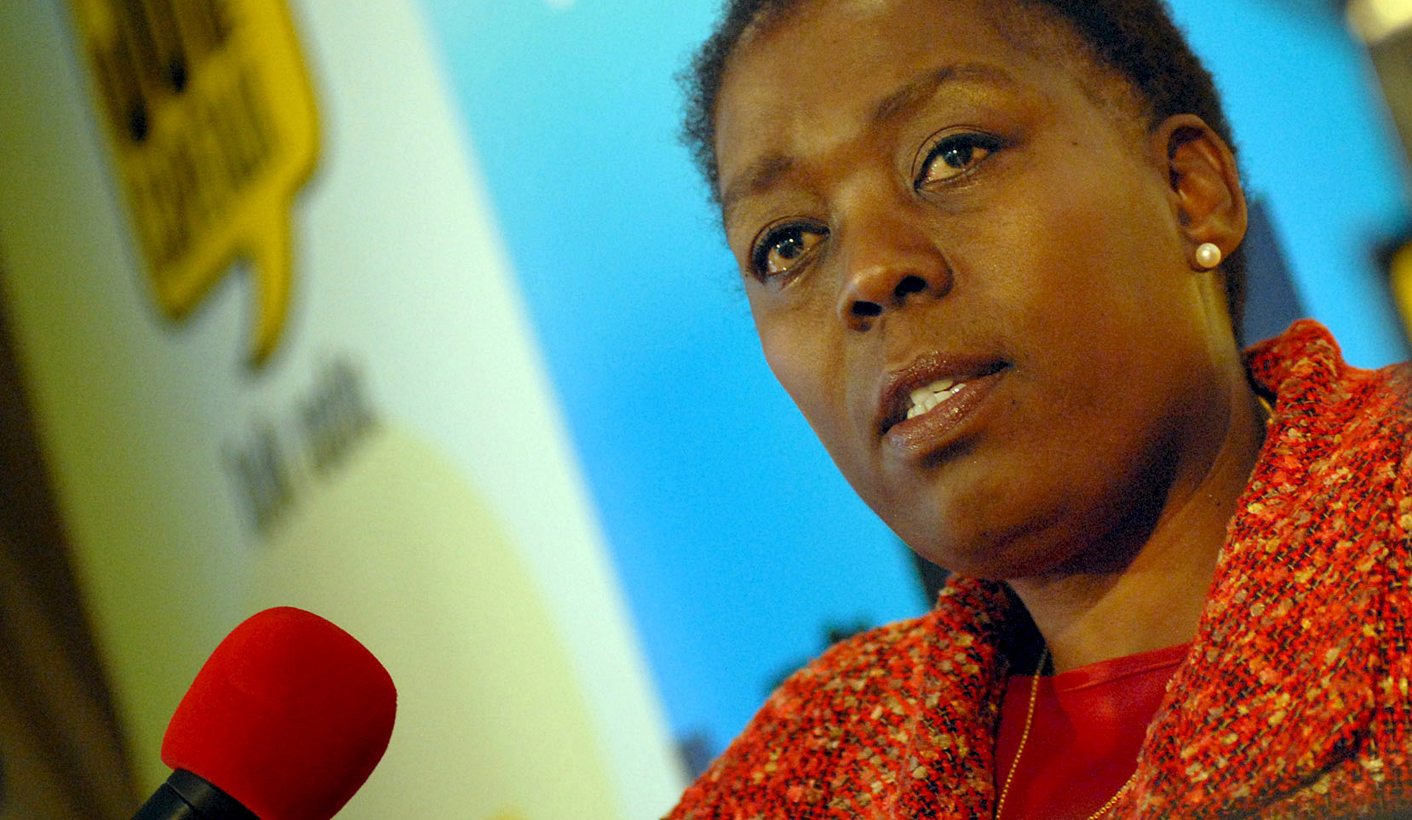 It seemed like the perfect fit. After 13 years, Shelagh Gastrow, respected doyen of South Africa's philanthropic community and founder of Inyathelo, a nonprofit trust aimed at strengthening civil society and distributing millions in donor funds, stepped down in 2014. Former deputy minister Nozizwe Madlala-Routledge, who came with an impressive CV and the cachet of having worked with civil society, was appointed as the new Executive Director of the organisation. And yet, in March this year Madlala-Routledge resigned during a disciplinary hearing after she was suspended by the board following a toxic five months at the helm which saw an exodus of experienced staff and work virtually grinding to a halt. What went wrong? By MARIANNE THAMM.

When former Deputy Minister of Health and Deputy Minister of Defence, Nozizwe Madlala-Routledge, was appointed as Executive Director of the NGO, the South African Institute for Advancement, known as Inyathelo, the organisation had a bank balance of R48-million and a global reputation among funders for excellence in the NPO sector.

The organisation, founded by Shelagh Gastrow in 2002, grew in the 13 years under her stewardship from a two-person outfit into a formidable organisation offering a range of services including training programmes, a centre to support civil society, a database that could link philanthropic funders with organisations, a fundraising toolkit, an incubation space, hot desks within the organisation to help NGOs to conduct research, as well as a host of other services to assist the burgeoning sector.

Inyathelo connects key global private funders such as Atlantic Philanthropies, the Kresge Foundation and others with local NGOs. It is also involved in the vital task of the researching and monitoring of government policy. Apart from this, the organisation also played a key role in establishing an Independent Code of Governance for Non-Profits in South Africa as a counterpoint to King III.

In 2014 Gastrow felt it was time to leave and informed the board, hoping to facilitate a carefully crafted handover. The organisation had come to represent for Gastrow a personal legacy. She is widely respected locally and internationally for her work at Inyathelo.

Gastrow had informed the Inyathelo Board that after her departure she was hoping to set up a small consultancy to advise individuals who wanted to become involved in philanthropic ventures in South Africa. This would not clash with Inyathelo’s interests as the organisation had never advised philanthropists but rather promoted philanthropy and linked philanthropists with NGOs. Gastrow hoped that her new venture would ultimately complement Inyathelo’s work.

Gastrow signed an exit contract which included a R1.5-million payout in recognition of the role she had played over 13 years, but it came with obligations including that she was required to introduce the new CEO to donors both locally and internationally, provide strategic advice for a year, conduct 12 nonprofit clinics, three training sessions as well as training on fundraising. The contract, which did not include a restraint of trade, was perused by a lawyer. Her exit then was deemed as legal and transparent.

On 19 May 2015 Inyathelo had seemingly found the perfect fit and announced on its website that former Deputy Minister of Defence and Deputy Minister of Health, Nozizwe Madlala-Routledge, would be be taking up the reins at the organisation on 15 June that year.

“Madlala-Routledge, who also served as Chairperson of the ANC Parliamentary Caucus, Deputy Speaker of the National Assembly and Deputy Minister of Defence, has a long and distinguished history of campaigning for human rights and working for civil society organisations that deepen and advance democratic participation,” a statement on the Inyathelo website announced.

And then suddenly on 14 March this year Madlala-Routledge resigned “with immediate effect” as Executive Director, after the Inyathelo board had convened a disciplinary hearing into allegations of serious misconduct against her.

“Rather than hold herself accountable to the Board and answer the allegations of serious misconduct Ms Madlala-Routledge decided to resign with immediate effect. It is important to note that the Board of Trustees volunteer their time and receive no remuneration for the execution of their duties. The Board therefore has no vested interest in allegedly ‘building a case’ against Ms Madlala-Routledge. Rather, the Board is obliged to act within the best interests of Inyathelo and to hold senior employees to account. The Board is ultimately responsible for the governance of Inyathelo, and it is with this fiduciary duty in mind that the Board took the decision to conduct an investigation and to commence disciplinary proceedings against Ms Madlala-Routledge,” the Board of Trustees announced.

What the hell went wrong?

Four months into the job, “serious concerns about the conduct of Ms Madlala-Routledge were raised with the board” and she was “furnished with these concerns in writing and provided with an opportunity to comment on those concerns”.

Madlala-Routledge commented in detail on these after which the board considered whether there was any basis for the disciplinary hearing. Instead it opted to conduct an investigation.

Two months later, in December, information about the toxic fallout inside Inyathelo first emerged in public when the board suspended Madlala-Routledge. Soon after Madlala-Routledge had taken up the position, a number of senior Inyathelo staff members resigned and relationships inside the organisation soured.

Madlala-Routledge in turn claimed that a vendetta had been waged against her – particularly as she had questioned the payout to Gastrow. She also claimed that the board had offered her [Madlala-Routledge] a settlement, that the Board, and the attorneys instructed by it, built a case against her to have her dismissed, that crucial documents were withheld from her and that she had been subjected to insulting, bullying and grossly unjust treatment.

“Sadly, and to the knowledge of Ms Madlala-Routledge, the facts in this matter and Ms Madlala Routledge’s own conduct do not support her claims. The Board has no option but to respond to her unfounded and unwarranted accusations against Inyathelo.”

The allegations against Madlala-Routledge are damning and included making various unilateral decisions without consulting Inyathelo directors, unauthorised expenditure, a failure to disclose key information to the Board and directors in relation to her decisions, the potential compromising conflict of interest, a failure to comply with internal policies as well as serious budgetary concerns.

In its statement the Board said that Madlala-Routledge had “failed to account for the allegations of serious misconduct and rather has chosen to deflect to the agreed exit of Ms Shelagh Gastrow, the former executive director of Inyathelo. It is important to note that the allegations of serious misconduct are not linked to Ms Shelagh Gastrow in any way. Those claims are a ‘red herring’ and rather relate to Ms Madlala-Routledge’s conduct during her very short tenure as the executive director of Inyathelo.”

She was accused of spending R312,000 on an unauthorised trip to Spain in June 2007, accompanied by her son. At the time she still owed the Department of Defence R116,357 in unauthorised expenditure that the state was attempting to recover in terms of the Financial Management Act.

Madlala-Routledge was fired that year by President Thabo Mbeki, a move that at the time was read as punishment for an unscheduled visit to the Frere Hospital in East London. Afterwards she criticised the government’s tardy response to the HIV/AIDS crisis that faced the country.

At the time, many who supported Madlala-Routledge claimed her dismissal was unfair, but Mbeki had written to her that the reason for this was her inability to work as part of a team as well as her unauthorised trip.

“I have, during the period you served as deputy minister of defence, consistently drawn your attention to the concerns raised by your colleagues about your inability to work as part of a collective, as the constitution enjoins us to,” wrote Mbeki.

Former close colleagues of Madlala-Routledge have spoken of her erratic and autocratic behaviour as well as her “explosive rages” during her deputy ministerial terms. Madlala-Routledge declined to be interviewed by Daily Maverick.

Meanwhile the aftermath of Madlala-Routledge’s short term can still be felt in the once bustling offices of Inyathelo.

After Gastrow left in 2014, Barends paid tribute to her work, stating that “during her tenure, Inyathelo has become an institution which is synonymous with building and advancing capacity. Shelagh does not leave the organisation with the spoils. She leaves behind a rich legacy, which we can only celebrate. In understanding the nature of change, we have learnt that we cannot cling and attach ourselves to the idea that only one person, no matter how outstanding they are, can determine the success of an organisation. The team that remains as the active core at Inyathelo have themselves taken ownership of the vision. I applaud the team that have become the bedrock of this institution.”

Some of that team remains, but the damage has been done. Whether Inyathelo can recover depends on how it charts its way forward doing the vital work it once pioneered. DM