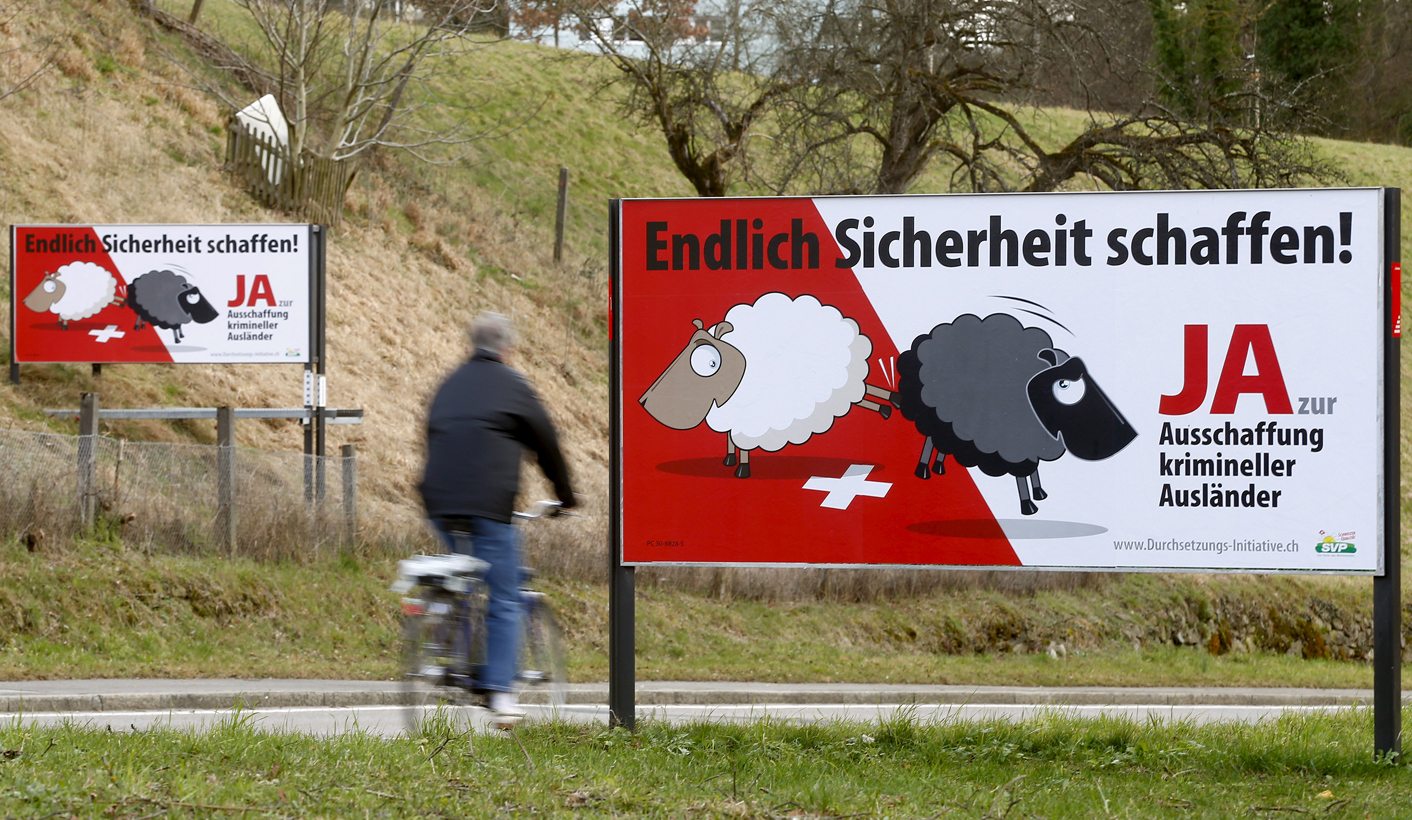 Today, Sunday 28 February, Swiss voters will decide on a popular initiative that represents a serious and unprecedented attack on the constitutional state in that country. The initiative demands that people without Swiss passports and who are found guilty of an offence be automatically deported. This would extend to petty offences that would entail a fine for people with Swiss passports. This double standard before the law would create an apartheid-like legal system. Resistance to this initiative is huge – yet recent polls suggest the results will be close. By SILVIA LIEBERHERR.

The largest political party in Switzerland, the Swiss People’s Party (SVP), has launched the so-called initiative “on the enforcement of the expulsion of foreign criminals (the enforcement initiative), which if accepted could result in serious consequences for anyone who lives in the country and who is not in possession of a Swiss passport.

In Switzerland any member of the electorate may launch a popular initiative demanding an amendment to the Federal Constitution. In the last two decades the SVP, an extreme right-wing party has made use of this instrument to dominate an increasingly racist political discourse, attributing every social problem to the imagined cause of “foreign national criminality”.

In 2010, the SVP proposed the deeply racist “deportation initiative” to voters – and won. Now people without Swiss passports who are found guilty of a crime must be deported. Before the Swiss parliament and executive organs had completed adapting legislation and procedures to implement the “deportation initiative”, the SVP claimed that the “will of the people” had not been respected and launched their “enforcement initiative”. Despite the fact that the “enforcement initiative” is clearly in violation of human rights and the basic principles of a democratic constitutional state, Swiss voters are now being asked to cast their ballots.

In Switzerland, there is no judicial review process to assess whether proposed popular initiatives are in line with national constitution or international law. Rather the full power to decide is given to the “people”, namely those with a Swiss passport.

The “enforcement initiative” adds a list of about forty additional offences to those that already lead to deportation according to the “deportation initiative.” Aside from human trafficking or murder, the list would now also include petty and non-violent offences like trespassing or social benefit fraud. The “enforcement initiative” demands that people who are convicted of one of these crimes, must, if they do not have a Swiss passport, automatically be deported.

Let us imagine a woman, born and raised in Switzerland but without a Swiss passport, who receives a benefit of 250 USD per month to support her son’s university education. After two semesters, her son takes a break from his studies and travels to South America. The parent fails to report to the administration that her son is no longer a full time student and still receives the education benefit.

If the “enforcement initiative” were to be passed, this parent would be automatically deported, even if she did not have the intention to commit a social benefit fraud. A parent with a Swiss passport in the same situation, on the other hand, would face only a conditional fine. The same would be true for a young person who breaks into a garden shed while drunk or a worker who does not properly account for medical bills with their insurance company.

These new laws could also be used against political activists and people participating in political protests, as they are increasingly convicted with trespassing or making threats against police or other public officials – both included in the list of offenses that would automatically lead to deportation. Such a law would make political activism and life in general very difficult for residents of Switzerland without a Swiss passport.

To be clear: about one quarter of people living in the country does not have a Swiss passport. Since Switzerland has a very restrictive naturalization policy, even those born and raised in the country may still be considered “foreigners” and face difficulties in acquiring Swiss nationality.

The “enforcement initiative” demands a separate and draconian set of laws particularly for this quarter of the population who do not have a Swiss passport. This can also mean that people may be deported to a country where they have never been before, and whose language they do not speak, simply because they do not hold a Swiss passport.

The “enforcement initiative” demands that deportation is legally required to be enforced regardless of a person’s personal or family situation. Until now, the so-called “hardship clause” assured judicial discretion: it enabled judges to assess the situation of each individual person without a Swiss passport, to consider extenuating circumstances, and to decide accordingly.

The initiative proposes abolishing the “hardship clause” because the SVP argues that judges would use it to protect offenders, thereby contravening or getting around the “will of the people”. If the initiative were passed, it would be mandatory to deport a person without a Swiss passport found guilty of an offense included in the list, regardless of any possible extenuating circumstances or humanitarian considerations.

First, this is clearly in contravention of the principle of commensurability that is a fundamental pillar of a constitutional state. Second, it erodes the separation of powers. If the electorate codifies such a detailed and unappealable law directly in the constitution, the electorate becomes legislative and judicative at the same time.

Therefore, the initiative would establish an apartheid-like legal system, one that is based on the legal separation of different groups of people and inequality before the law.

Additionally, the initiative is not only a racist, but also a class project. While more typically blue-collar crimes are included in the list requiring automatic deportation, many typically white-collar crimes are excluded. Ironically, the “enforcement initiative” demands even less severe consequences (no deportation) for these offenses than the earlier “deportation initiative”. While people without a Swiss passport would be deported for a petty offence with damages of about 400 USD, those who commit tax fraud on a large scale could stay.

The SVP has been promoting the topic of “foreign national criminality” very successfully and have managed to infiltrate public discourse and the media with their constructed problems, their hate propaganda and their racist language. Their next popular initiative is already in the pipeline: it would propose to give Swiss law prominence over international law.

Thankfully, the “enforcement initiative” has sparked serious and unforeseen resistance in Switzerland. A broad and diverse coalition of civil and political society organisations has massed against the SVP’s popular initiative – liberals and religious conservatives, white and blue-collar workers, scientists, artists and sportspersons.

Last but not least, many lawyers, judges and law professors have spoken clearly against it. The consequences would be grave for residents of Switzerland who do not have a Swiss passport. And for those who do. If this popular initiative is passed on Sunday, the result will be to codify racism and discrimination in the constitution, doing lasting damage to the society as a whole.

All this happens in a climate where racism and xenophobia are already broadly accepted. That is why in spite of the dire consequences and broad resistance, the outcome of Sunday’s vote remains too close to call. And this what is the most unsettling. DM

Photo: Posters of Swiss People’s Party (SVP) demanding to deport criminal foreigners are displayed beside a road in Adliswil, Switzerland February 11, 2016. Switzerland will hold a binding referendum later this month on whether to subject any foreign resident to automatic deportation if convicted of offences running the gamut from murder to breaking the speed limit. The posters read, “At last make things safer! Say yes to deportation of criminal foreigners”. REUTERS/Arnd Wiegmann