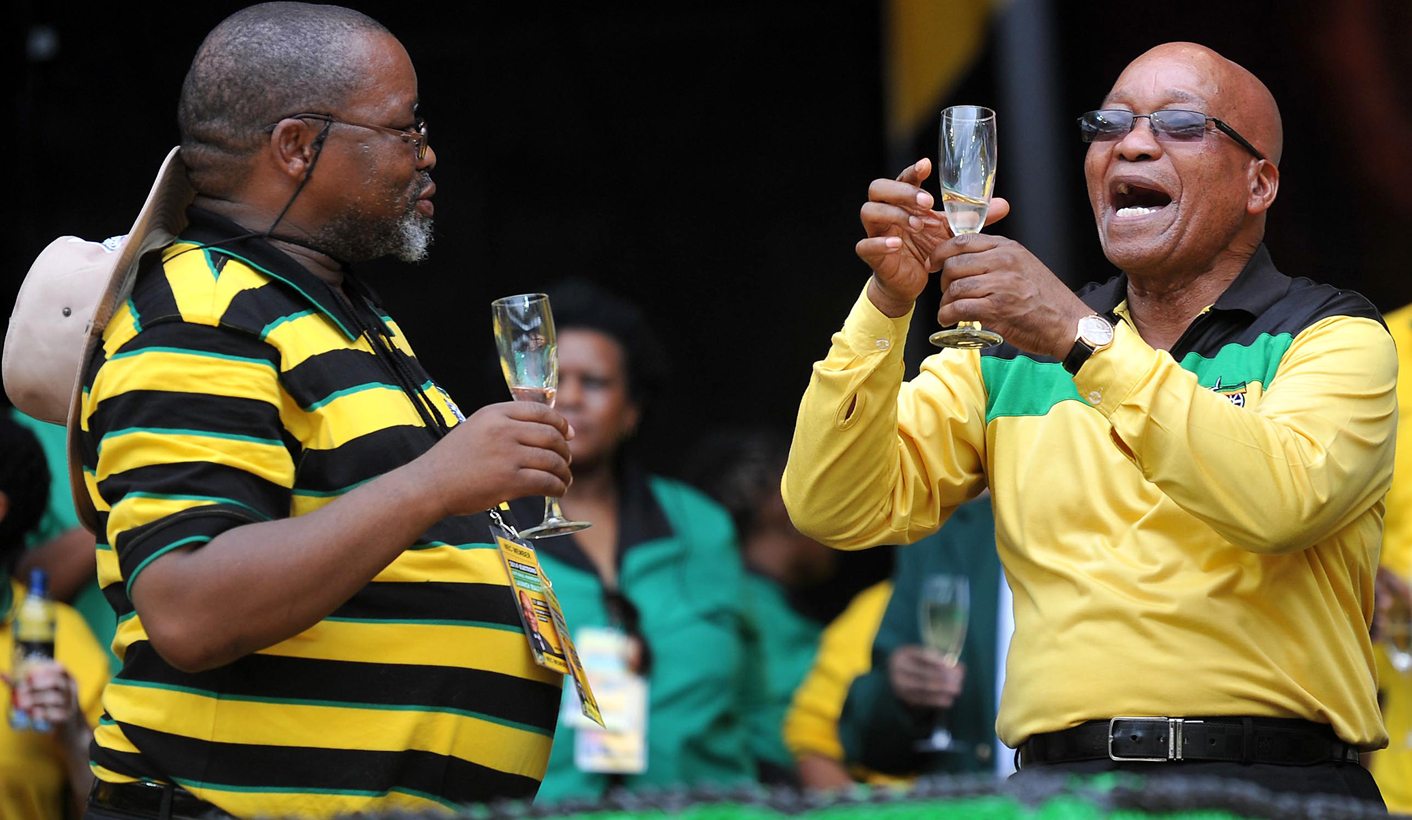 Events unfolding around a Hawks' attempt at questioning Finance Minister Pravin Gordhan in relation to an alleged SARS “rogue” unit should be seen as a significant political moment in South Africa. ANC Secretary General Gwede Mantashe's statement that the party fully supported Gordhan could be viewed as the “second tilt” in Gordhan's direction. The first tilt was Gordhan's unexpected re-instatement in December. Now Gordhan too has hit back at those “who have no interest in South Africa, its future, its economic prospects and the welfare of its people”. Is this now a battle for the soul of the ANC? By MARIANNE THAMM.

The drama surrounding the political power play between Finance Minister Pravin Gordhan and SARS commissioner Tom Moyane (and indirectly President Jacob Zuma) was ratcheted up a notch on Friday morning when ANC Secretary General Gwede Mantashe issued a statement saying the ruling party had “full confidence” in Gordhan and his department’s work in creating stability and “attempting to restore confidence in the country’s economy”.

Soon after, speaking at a business gathering, former Minister of Finance, Trevor Manuel, weighed in, stating that if he were still in office he would fire Moyane.

“I’d take 20 seconds and use it to craft a letter of dismissal for Tom Moyane,” Manuel reportedly said.

Then a few hours later, the Presidency issued a statement that it noted “the rumours and gossip which insinuate some conspiracy against Minster Gordhan” and dismissing these as “baseless”.

By late afternoon, the apparent target himself, Pravin Gordhan stepped into the ring and issued a strongly-worded statement saying he was grateful for the support he had now received from the ANC “and its determination to ensure that the vital state institutions such as the Treasury and the South African Revenue Service (SARS) are not adversely affected by the kind of actions we have seen in the past week.”

Decoded as: “Some in the party have my back, suckers”.

Gordhan said he believed that the letter he had received from the Hawks on 18 February, days before he was due to give his budget speech was intended to “intimidate and distract us from the work that we had to do to prepare the 2016 Budget.”

However, he added, a few days later the three-page set of “silly” questions were “maliciously” leaked to the media together with misinformation of “what might or might not have transpired at discussions that followed the receipt of the letter, including the ANC caucus meeting in Parliament on Thursday.”

This was done by a group of people who Gordhan said “are not interested in the economic stability of this country and the welfare of its people. It seems they are interested in disrupting institutions and destroying reputations.”

Gordhan said that the Hawks’ letter was an attempt by individuals who had “no interest in South Africa, its future, its economic prospects and the welfare of its people. If necessary, I will take appropriate legal action to protect myself and the National Treasury from whatever elements seeking to discredit me, the institution and its integrity.”

And then the nod and acknowledgement that he had been appointed by President Zuma “and I serve at his pleasure”.

Decoded as: “Shaft me again, and then let’s watch what happens to the markets.”

Gordhan said he could “categorically state” that the Hawks had no reason to investigate him. Gordhan has consistently maintained that no “rogue” unit existed in SARS.

“I want to state a few simple facts about the National Research Group (NRG) that was established in SARS during my time as Commissioner: The NRG, and subsequent investigative units, were legally constituted and approved at ministerial level.

It has done commendable work in disrupting activities in the illicit economy and raising revenue from high risk sectors of the economy. Its finances were approved transparently in the normal way of SARS budgeting processes and was audited by the Auditor General every year.

SARS ensured at all times that the NRG functioned within SARS legal and policy framework and within the laws of our country.

In May 2014 Gordhan, after announcing an expenditure ceiling that year, was unexpectedly moved by President Zuma to the department of cooperative governance and traditional affairs in a surprise cabinet reshuffle. At the time the move was widely regarded as a “demotion” and an attempt to sideline Gordhan.

Announcing that reshuffle Zuma said that he had done so in order to facilitate “the second phase of the transition to a national democratic society would be a radical phase of socioeconomic transformation”.

Zuma replaced Gordhan with Nhlanhla Nene and at the time, Nic Boraine, analyst for BNP Parabas, said that the challenge for Nene would be his ability to “counterbalance powerful interests in government and the party”.

“The minister of finance needs to be powerful enough to resist a number of pressures, not least of which will come from his own party for increased spending or a shifting of priorities. It is a tough position that requires political backing or power. It is not clear that Mr Nene has that,” Boraine said.

Nene, it appeared had begun to resist these pressures when he was axed by President Zuma in December 2015 and replaced with Comrade David “Des” van Rooyen. Zuma’s was an ill-advised and catastrophic move which resulted in an own-goal when Gordhan was reappointed, four days later, after a negative national and market response.

Meanwhile, Zuma appointed Tom Moyane as SARS commissioner, a move after which former Deputy Commissioner Ivan Pillay, as well as several other key senior SARS officials were purged from the revenue service.

In his statement yesterday, Gordhan said that “in due course, the truth will indeed prevail” and that he would not be making any further statements on the matter.

This weekend is bound to see a range of meetings by heavy hitters in the ruling party in what appears to be a growing battle for the soul of the ANC. Watch this space. DM

Photo: President Jacob Zuma and ANC secretary general Gwede Mantashe (L) toast the 102nd birthday of the ANC during the launch of the party’s election manifesto at the Mbombela Stadium in Nelspruit, Mpumalanga on Saturday, 11 January 2014. Picture: SAPA stringer