EFF declares what’s at stake at the University of Pretoria: #AfrikaansMustFall 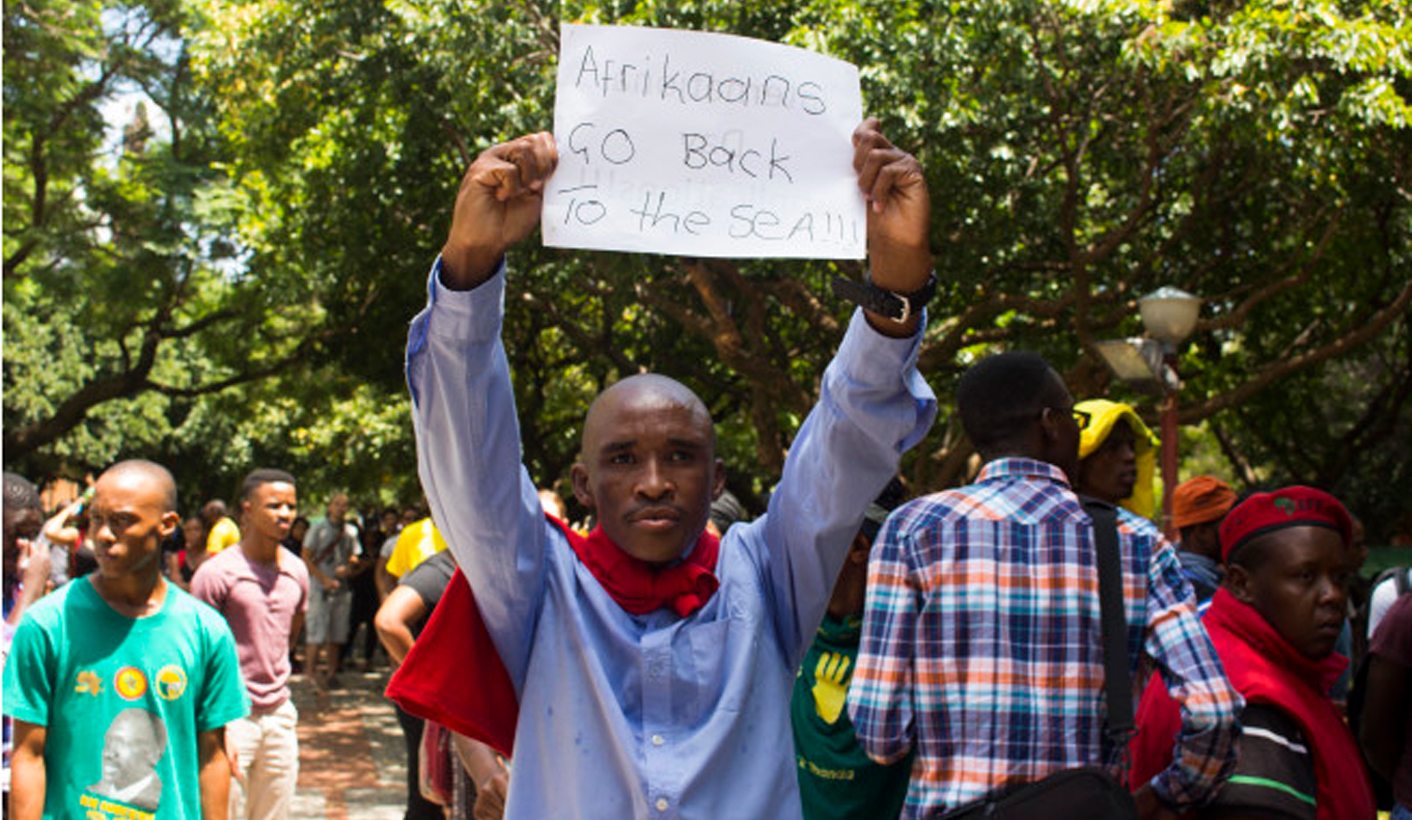 The University of Pretoria remains closed amid further student protests. This time, the students want to scrap Afrikaans as a language of tuition. It’s a controversial demand. BHEKI C. SIMELANE spoke to the EFF’s student leader Kabelo Mahlobogwane to find out what exactly they want to achieve.

The latest demand of student protestors at the University of Pretoria – to stop using Afrikaans as a language of instruction – has pitted elements of the #FeesMustFall movement against students aligned with the Afrikaner rights organisation AfriForum. It’s got ugly, with students trading insults and scuffling on campus.

To understand what exactly is at stake, the Daily Maverick spoke to one of the main drivers of #AfrikaansMustFall, EFF Student Command leader Kabelo Mahlobogwane. He said that while Afrikaners may feel that their rights would be encroached if Afrikaans was scrapped, there are other rights to consider.

“It’s not only Afrikaner people with rights. That narrative should be clarified. The arrogance that black people can be oppressed and undermined, its fine but when you speak against Afrikaans supremacy, there’s a revolt. Whites at the University of Pretoria have this tendency of thinking that all black people can speak Sepedi but don’t want us to believe that all whites can speak Afrikaans. Now they are angry because we are saying that whites should be treated the same way as black people. We are saying it’s all 11 official languages or only English. No retreat. They can go home,” he said.

Mahlobogwane said that one of the strongest reasons to have classes in English only was economic. In this straitened financial climate, and given the existing shortage of affordable university education, it is an easy way to save money. “Afrikaans is not economically viable as it means resources should be doubled up. We need more lecturers, translators, etc. The university spends about R100 million on Afrikaans each year. That money can be used to sponsor poor students. Afrikaans goes against the project of social cohesion as it creates two universities in one. Even aggravating the situation is the separation of students in class and residences but are one day expected to work together.”

Mahlobogwane said he had no doubt that ultimately Afrikaans would fall, because it is not just the language of tuition but also that of the oppressor. This is part of a system that at the University of Pretoria is used to “exclude and create some sort of superiority”; a system that had oppressed students’ parents from the time of the National Party and seeks to do so again.

On the subject of violence, the EFF student leader blamed the AfriForum-aligned defenders of Afrikaans, saying that he could not sit and watch while being attacked.

“The most important thing will be for us to meet the students to make sure there is no more violence in campus. We must ensure that students in campus are safe and ensure the university opens again. The University of Pretoria is an academic institution and should be able to ensure the safety of students in campus. It seems the way the EFF is willing to consult is only through violence,” he said. DM