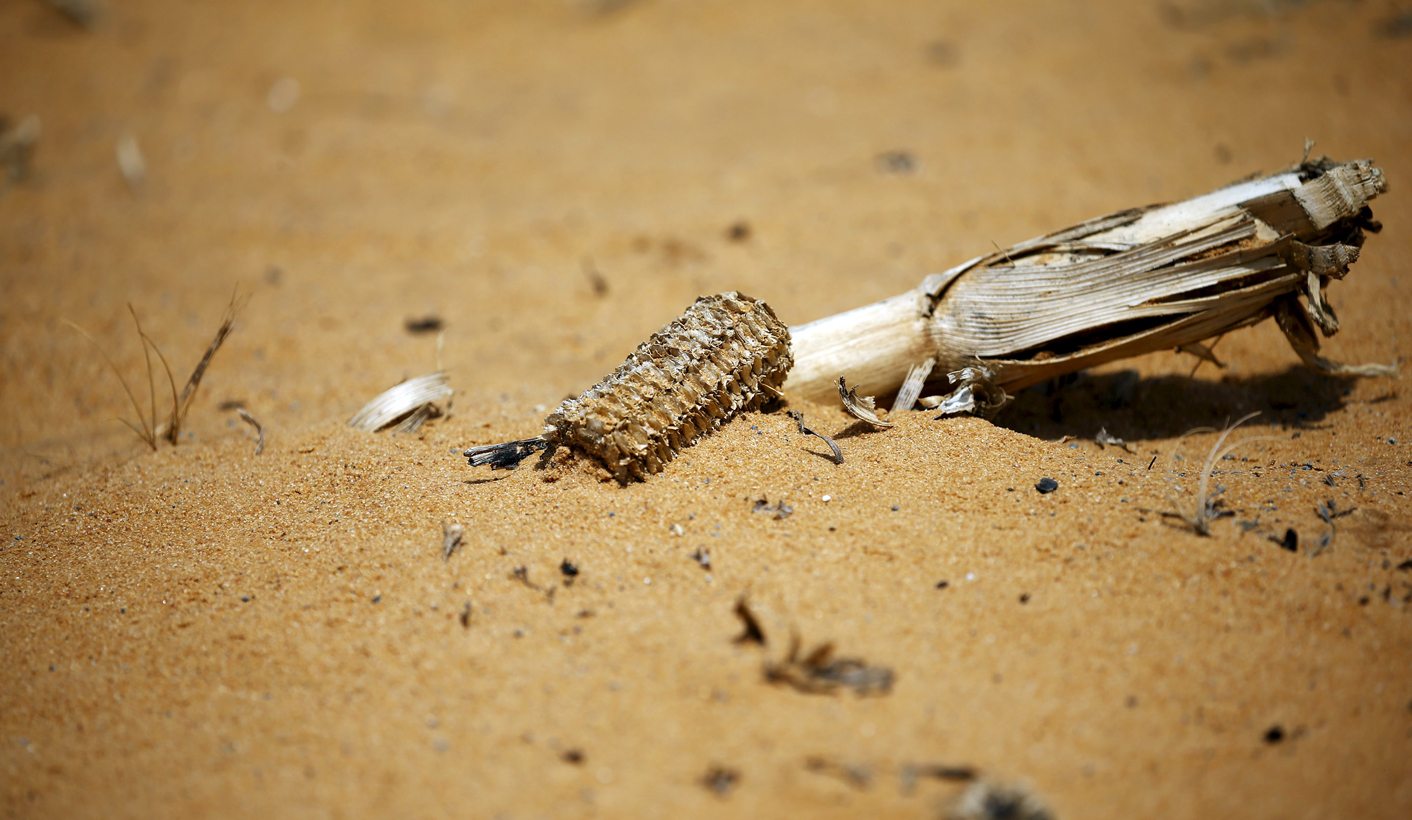 Despite last year’s wilted crops and harrowing tales from both commercial and emerging farmers alike, the politics of drought are complicated. There is a little publicly known bureaucratic structure, the National Crop Estimate Committee, which holds tremendous sway in these times of drought. Its recent upward revision of the 2016 mielies crop predictions could not have come at a better time for a government caught up in political and financial trade-offs. By MARIANNE MERTEN.

With a swoop of the committee’s pen, government could spin the worst drought in 104 years – already 2.7 million households are food insecure – into, if not a good story then a better one amid economic woes linked in no small way by the weakened rand. Deputy Agriculture, Forestry and Fisheries Minister Bheki Cele on Wednesday announced in Parliament that South Africa would only have to import “3.8 million tons (of mielies) – no more six million (tons)”.

The need to import between five to six million tons of maize for 2016, or half the average annual production of 12 million tons, had been announced at a media briefing by the agriculture and rural development ministers on January 22. Five days later the national crop estimate committee determined South Africa would produce an estimated 7.438 million tons of white and yellow maize, triggering the downward revision of imports.

But it would cost around R14 billion to import this 3.8 million tons of mielies, according to GrainSA economist Wandile Sihlobo, who cautioned import requirements may yet change. “It’s too early to have a clear view,” he said. “Much of the crop has been planted outside optimum areas … If you plant beyond the usual time frame there is a high probability the yield will be lower.”

The impact of the drought in KwaZulu-Natal, Mpumalanga, North West, Limpopo and the Free State is clearly seen in photos and videos of emaciated cattle. Last year’s wilted crops and harrowing tales from both commercial and emerging farmers alike, the politics of drought are complicated. That is because the politics of drought are steeped in numbers – not just the 2.7 million households without a secure food supply, the estimations of a 2016 crop still at the mercy the April/May frosts, but also the state’s Rands and cents.

For several months now various ministers publicly sidestepped calls to declare the drought as a national disaster. Such a declaration would activate a series of legal and financial processes to release monies from the contingency reserves. That’s the fund governments maintain for unforeseen eventualities, or the equivalent of Auntie Bertha keeping money under the mattress for life’s little downturns.

Ministers have argued because not all provinces are affected, there was no need to declare a national disaster. But this obscures the politically touchy, and financially troubling, fact there simply is no money in the state’s contingency reserves for this financial year ending March 31, 2016. The emergency kitty was used to pay public servants a 10.1% salary package increase, well above what had been budgeted for. Labour federation COSATU, whose 1.8 million members largely represent public sector trade unions, had threatened to go on strike.

“The R5 billion contingency reserves for 2015/16 were fully absorbed by the wage bill shortfall. Projected reserves of R15 billion and R45 billion in the two outer years (of the three year medium-term budget cycle to 2017/18) have been cut to R2.5 billion and R9 billion respectively,” states page 24 of the Medium-term Budget Policy Statement (MTBPS) delivered in October 2015 by then finance minister Nhlanhla Nene.

At the traditional pre-MTBPS media briefing, he said the wage settlement was negotiated, but it had “wiped out the contingency reserve” and still required provinces to find additional monies.

But this week, Co-operative Governance Minister Des van Rooyen, whose portfolio includes disaster management, dismissed any link between not declaring a national disaster and the depletion of the contingency reserves. There was sufficient money for drought relief, he said: “We are not at that stage (of declaring a national disaster) yet. At this stage not all the provinces are affected… We are not financially exhausted”.

Of course, the niggling point in law is that not all provinces have to be affected for a national disaster to be declared. Section 23(6) of the 2002 Disaster Management Amendment Act simply states “A disaster is a national disaster if it affects – (a) more than one province: or (b) a single province which is unable to deal with it effectively”. That provision has not been affected by the amendment legislation signed into law by President Jacob Zuma on December 13, 2015.

Instead, government scrambled to find unspent, and thus available, money on its existing balance sheets. Thus the national water and sanitation department has allocated R498 million for water tankers and drilling of bore holes, while R124 million has been found in provinces, specifically for livestock feed, it emerged in Zuma’s response to the parliamentary debate on his State of the Nation Address (SONA).

Wednesday’s Budget is expected to announce further financial allocations for drought relief, either through the contingency reserves, or what government calls “re-prioritising” allocations within existing departmental budgets. At Thursday’s briefing on the week’s cabinet meeting, Minister in the Presidency Jeff Radebe said ministers are “concerned” about the drought. Like others before him, he sidestepped a question on the contingency reserves: “Let’s wait for the Minister of Finance (presenting the Budget). I’m sure there’ll be something said in detail”.

Parliament’s Budget Office this week identified the drought as “a problem” and a key concern in the upcoming Budget, including the pressures the weak Rand put on the required mielies imports. MPs were told that as of December 2015 R4.2 billion were required to meet the requests for assistance from farmers. Yet the relevant provincial grant stood at R103 million. “It’s a fight for food security. It’s putting pressure on this country…” said Dr Mmapula Sekatane, of the Budget Office.

While government has instructed provinces to redirect 20% of the R226 million Letsema grant for drought mitigation, it has also directed farmers to the Industrial Development Corporation (IDC), or the Land Bank and AgriBusiness for loans. A total of R32 million has been approved, according to the agriculture ministry.

Pressures will increasingly be felt over the next six to nine months when higher food prices hit consumers, according to Sihlobo. Although the drought started last year, the impact was mitigated due to the above average miellies crop of the previous year. But the 2015 crop came in at 30% lower to the around 14 million tons produced in 2014, he added. Or as the national crop estimates committee said on February 11, 2016:

Farmers, who are said to face a R10 billion losses over the below average 2015 crop, are taking risks. Whether the gamble pays off will be evident to anyone travelling along the N1, which not only connects Cape Town to Musina, but also divides South Africa into the eastern and western mielies zones.

Sihlobo says crops were planted outside the usual planting times are October 15 to November 15 on the east side, and November 15 to December 15 on the western fields. Until the young shoots break ground, grow and ultimately are harvested and stored in silos, farmers remain in limbo – and so is the country.

The agriculture sector employs around 500,000 workers and job losses are real threat. According to government’s own statistics, one in five households in South Africa is already food-insecure. Rising food prices will also hit the pockets of the chattering classes. Agriculture Minister Senzeni Zokwana has acknowledged that due to the drought government would not meet its goals of decent employment, sustainable rural communities with food security for all and the enhancement of environmental assets and natural resources.

With the drought unlikely to be broken soon, the country and its citizens face troubled times. The politics of drought must find a new direction. DM

Photo: A dried maize cob is seen at a field in Hoopstad, a maize-producing district in the Free State province, South Africa, January 13, 2016. REUTERS/Siphiwe Sibeko.