A return to civil action: Clergy to spearhead new movement to tackle crises in South Africa 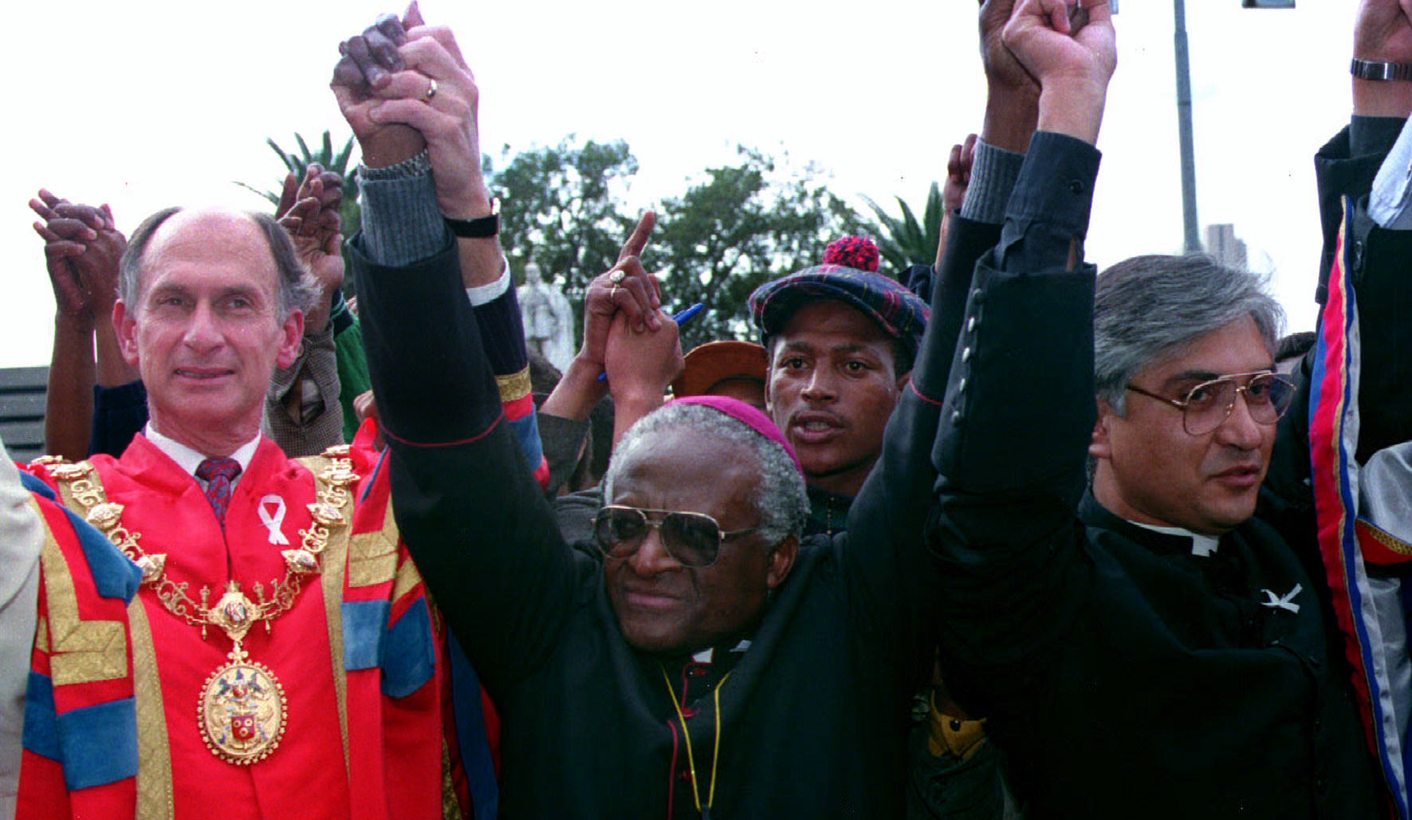 Photo: Archbishop Desmond Tutu links arms with Cape Town Mayor Frank van der Velde and the Anglican Dean Colin Jones after appealing for unity and peace amongst South Africans at a memorial service for victims of 1993 attack on a Cape Town Church. By Reuters.

In the 1980s it was the country's clergy across denominations that rose to prominence at the forefront of internal resistance to apartheid. Leaders like Archbishop Emeritus Desmond Tutu, Rev Beyers Naude, Rev Allan Boesak, Rev Frank Chikane, Maulana Farid Esack, Imam Hassan Solomon and Rev Sid Luckett, among others, led hundreds of thousands in various protest marches throughout the country. This week Anglican Archbishop Thabo Makgoba announced the formation of a new but more low-key social initiative to address various crises facing the country. By MARIANNE THAMM.

During the apartheid years, church and business leaders were quick to respond to and highlight abuses by the then National Party government. The active and ongoing mobilisation by leaders of traditional churches and other religious denominations not only served to draw international attention to the political situation in South Africa but in fact hastened the collapse of the system.

The final report of the Truth and Reconciliation Commission found “some of the major Christian churches gave their blessing to the system of apartheid. And many of its early proponents prided themselves in being Christians. Indeed, the system of apartheid was regarded as stemming from the mission of the church…Religious communities also suffered under apartheid, their activities were disrupted, their leaders persecuted, their land taken away. Churches, mosques, synagogues and temples – often divided amongst themselves – spawned many of apartheid’s strongest foes, motivated by values and norms coming from their particular faith traditions.”

In what appears to be a return to the tradition of religious activism, Anglican Archbishop Thabo Makgoba announced this week the formation of a major social initiative, the Socio-Economic Future of South Africa (SEFSA), to be led by “prominent leaders among religious, civil society, business and community-based organisations”.

However, the grouping will be focussing, according to Dr Ruben Richards, one of the organisers, less on the symbolism – the marches of the 1980s – and more on practical solutions to many pressing issues that currently face the country.

“This will not be an event. It will be a process. We intend to focus on a way of unlocking the goodwill and the potential that exists in this country and to make concrete and visible contributions including skills policy recommendations and helping with capacity for government departments,” Richards told the Daily Maverick.

SEFSA, he added, would not be a mass movement of “chance” but a sober assessment of what the country needed “to move forward” and to offer collective solutions and a safe space to do so.

Richards, an author and former Executive Secretary of the TRC as well as a Deputy Director-General of the Scorpions, is also the CEO of an engineering company, a business consultant and visiting adjunct Professor at the Wits Graduate School of Public and Development Management, and is well placed to drive the initiative.

The announcement by Archbishop Makgoba follows a week after a scathing attack by business leader, Ann Bernstein, who charged that South African business leaders had been weak and cowardly in their responses to various crises in the country.

She added that the public response by Business Leadership SA (BLSA) after the firing of Minster of Finance Nhlanhla Nene had been instructive.

“A more defensive, cautious, and totally-without-impact statement is hard to imagine…A statement by business leaders amid an unprecedented economic crisis should have spelled out the consequences of the president’s actions for all South Africans; indicated that he had single-handedly undermined one of the major achievements of democratic SA, namely the creation of a world-class treasury and global confidence in the country’s fiscal management; and stated it had undermined their confidence in how the country was being governed.”

Bernstein added she understood business leaders were “in a difficult situation: castigated by high government officials for not speaking out clearly; criticised by others when they do.”

“‘Going along to get along’, as participants in, and sometime implementers of, policies they believe to be misguided and damaging is probably the predominant response. Others have opted for silence and withdrawal. But a lack of plain speaking does not foster effective communication about the problems besetting the economy, or make clear what business needs from the government,” she said.

A press statement from SEFSA titled “Rebuild, Recover, Renew” announced that the initiative was finalising its preparatory phase of consultations for a series of events that would address “the social, cultural, spiritual and economic crisis facing South Africa today”.

A two-day summit will be held on 11 and 12 March to address “urgent matters in our nation that has now manifested in a widely acknowledged crisis. The summit will be followed by a mass public dedication and blessing of the manifesto approved by the participating leaders” which will also include labour and the cultural sector.

Issues that will be addressed include “reconciliation, moral disintegration and an overwhelming sense of disillusionment among the people of our country” as well as high levels of unemployment, violence and poor service delivery.

“There has also been an inordinate battering of the South African currency and a gloomy economic forecast for the near and immediate future. Those most affected by this deepening crisis are the poorest of the poor, the vulnerable and the infirm.”

While the primary objective of SEFSA would be “to restore faith and optimism” it also aimed to “develop a comprehensive strategy for addressing the crisis and to work with government to effect a sustainable turnaround”.

South Africans would be drawn into the initiative as soon as consultations had been finalised and a roll-out plan that follow that could involve “every citizen in a process of renewal and rebuilding of the bridges that this crisis threatens to break.”

Since 1994 criticism of the democratic government by the clergy has been somewhat muted but a few leaders, most notably Archbishop Tutu, continued to speak out at various junctures when he felt morally obliged to do so. This included the ruling party and its government’s response to the HIV/AIDS epidemic, the arms deal and general corruption.

South Africans are deeply religious and respect the moral authority of religious institutions so the capacity for these to influence public sentiment should not be underestimated. The urgency of the many crises are, in part, due to global economic conditions but also largely due to policy flip-flops and weak leadership by a government led by President Jacob Zuma who has been distracted by ongoing personal scandals. The skills shortage and mismanagement of resources has also short-changed citizens and SEFSA hoped to remedy this.

“While everyone at the moment is calling for things to fall, we would like to try and make things rise,” concluded Richards. DM

Photo: Archbishop Desmond Tutu links arms with Cape Town Mayor Frank van der Velde and the Anglican Dean Colin Jones after appealing for unity and peace amongst South Africans at a memorial service for victims of 1993 attack on a Cape Town Church. By Reuters.