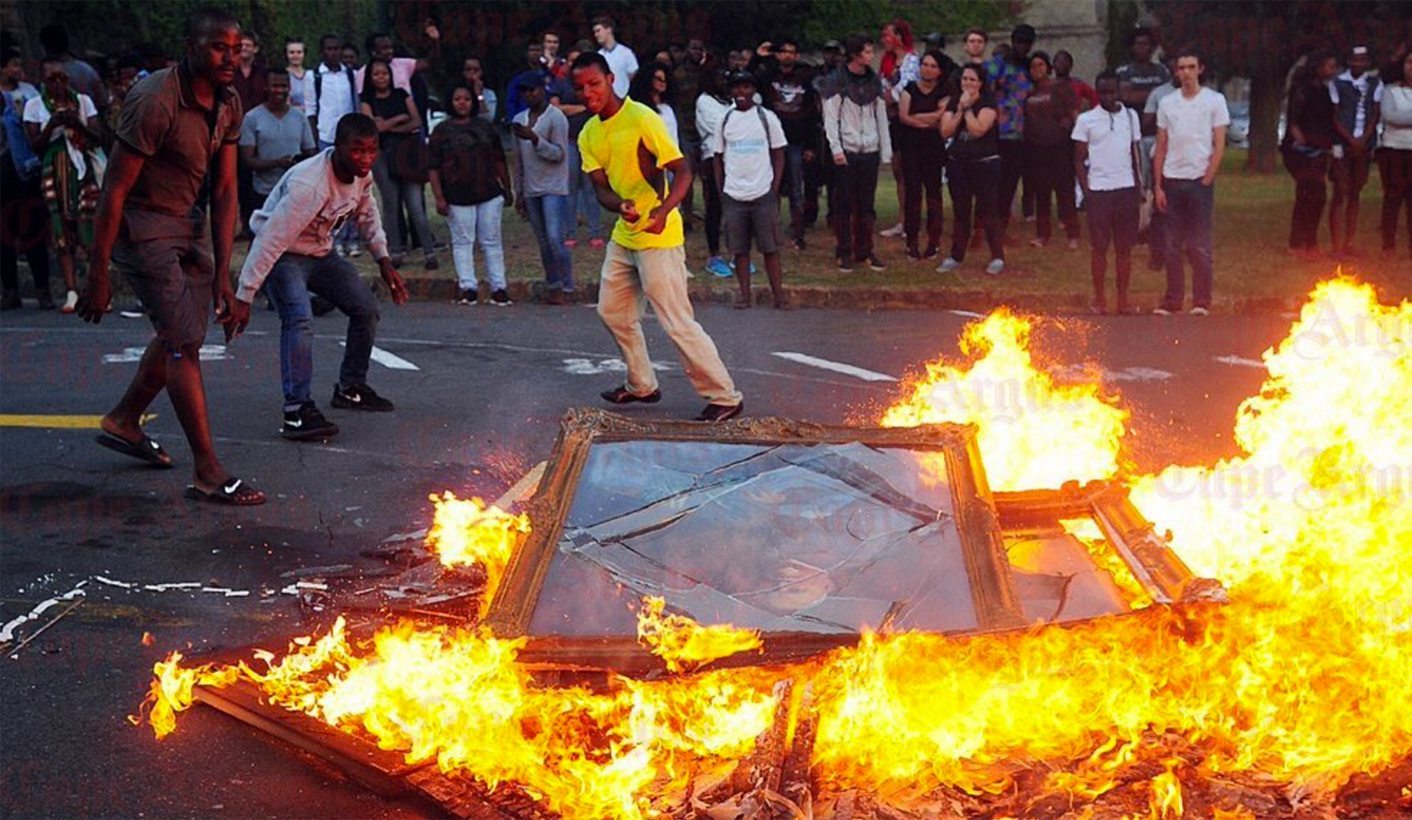 Student protests in Cape Town reached a tense standoff on Tuesday night, with protesters setting a bus alight outside the UCT's Tugwell residence. The university confirmed that nobody was hurt during the incident, but 2016 seems set to continue in much the same vein as 2015 – if not with more vehemence than before. Neither side is backing down. By MARELISE VAN DER MERWE.

On Tuesday night, UCT issued a terse statement promising that the police would be investigating an incident in which a Jammie Shuttle bus had been set alight outside a residence on lower campus. The university would also be taking legal action, it said.

“The University of Cape Town confirms that a Jammie Shuttle was set alight this evening on Lower Campus outside Tugwell residence. The bus was empty and nobody was hurt. UCT will open a case with the SA Police Service for this incident and will assist in the investigation. Another Jammie bus has been stoned,” said Patricia Lucas, head of the Communication and Marketing Department.

The university was in the process of obtaining an interdict and laying charges with the SAPS against leaders of Rhodes Must Fall (RMF) and others disrupting activities on upper campus, she added.

But if RMF was bringing out the big guns, UCT wasn’t playing dolls, either; stun grenades rained down on Jameson Plaza as a shack erected by RMF – to draw attention to accommodation issues at the university – was demolished. Students had formed a human chain around the structure, which they’d been ordered to remove by 5pm. Riot police intervened and the clash escalated.

“Tonight we witness the Black psyche unleashing generations of repressed pain. 2016 is the year we no longer pander to whiteness #Shackville,” RMF wrote on Twitter.

Earlier in the day, News24 published a video showing protesters affiliated with RMF burning artworks in the residences on upper campus.

Gerda Kruger, executive director of communication and marketing, condemned the incident, saying it had traumatised students and staff. “In the early evening the group entered Smuts Hall, Fuller Hall and Jameson Hall, removing artwork from the walls and burning it. They are traumatising wardens and students and vandalising. Several bins have been set alight,” she said. “The behaviour by RMF members is criminal and has exceeded all possible limits of lawful protest action. We are deeply concerned for the safety of students and staff. We call on students to refrain from supporting RMF in these actions and to vacate the area.”

RMF says it is being brutalised, claiming on Tuesday that at least one protestor was beaten up and in need of medical attention and adding on Tuesday night that a protestor had been shot by a rubber bullet. Earlier in the week, RMF had constructed a shack on Residence Road to draw attention to the plight of students who were without accommodation. “It is necessary‚ as part of the project to disrupt the architectural tone of the university. #Shackville‚” the movement said on Twitter.

On Tuesday afternoon, it added: “We are currently headed to lower campus. Please make sure that all comrades are safe tonight. This University doesn’t give a fuck about you.”

On the group’s Facebook page, narratives were mixed. RMF pledged continued dedication to its cause and alleged brutality from police and security guards. “Fuck this university and its management,” one status read, following the demolition of the shack.

“Another round of stun grenades with rubber bullets this time. Students were beaten up by unmarked private security thugs whilst police stood by and watched. One student was followed off campus by a black SUV and chased running on the highway before being caught and thrown in the back,” read the next.

Comments were not always supportive – in fact, the majority were critical – although the page itself has garnered well over 15,000 “likes”. “What the hell did you expect, guys?” commented one; “Tbh [to be honest] if UCT hadn’t done anything the students would have kicked you out themselves,” said another. In response to RMF’s request for comrades to join them at the Rondebosch police station, where arrested parties were being held following Tuesday’s protests, one commented: “Sorry, washing my hair, maybe later.”

Where does that leave South Africa, though? There is a critical shortage of accommodation on South African campuses; RMF charges – among other things – that white foreign students are given preference over local black students, and that money spent on security could have been spent on building more accommodation to assist students in need of residence. The question is what can be done about it.

Minister of Higher Education Blade Nzimande is continuing his discussions with various organisations over outsourcing and university funding, but these are not problems that are going to be solved overnight. Last week, during a briefing by Parliament’s Portfolio Committee on Higher Education, the department’s deputy Director-General Diane Parker confirmed that several of the country’s universities were still facing ongoing challenges in dealing with protests. According to Parker, Nzimande was intervening wherever possible to avoid the spread of protests and to inform student protestors of developments and discuss medium and long-term challenges; the reality, however, is that each campus is dealing with unique issues of its own in different areas. Registration fees remain contentious on some campuses, while staffing, curriculum and finally accommodation is a point of focus on others, such as currently at UCT. Student needs are not homogenous – nor are student views on how to deal with them.

Public Hearings kicked off on the Higher Education Amendment (HEA) bill on Tuesday, led by Parliament’s Portfolio Committee on Higher Education and Training, amid concerns that the bill would give Nzimande too much power to intervene in university matters – and that the guidelines for his scope of intervention on transformation issues were too vague.

For the students currently fighting for accommodation, however – for more spaces, and for equitable allocation of beds throughout the country’s campuses – matters of policy may seem a distant concern. According to the Department of Education, 171,755 matriculants achieved entrance to bachelor’s degrees, 173,292 to national diplomas and 94,540 to higher certificates in 2013, and those figures are likely to grow in the coming years. However, a 2015 survey, which focused on nine universities in South Africa, found that there were just over 68,000 spaces for more than 140,000 residence applications received in 2015. UCT could only accommodate 6,600 students in residence, but received over 21,000 applications.

Looking at the numbers alone, the accommodation struggle is far from over. And – given the many other costs universities are facing in the coming years – solutions are not going to be found overnight. But neither side is backing down. Gird your loins for a long, hard fight. DM