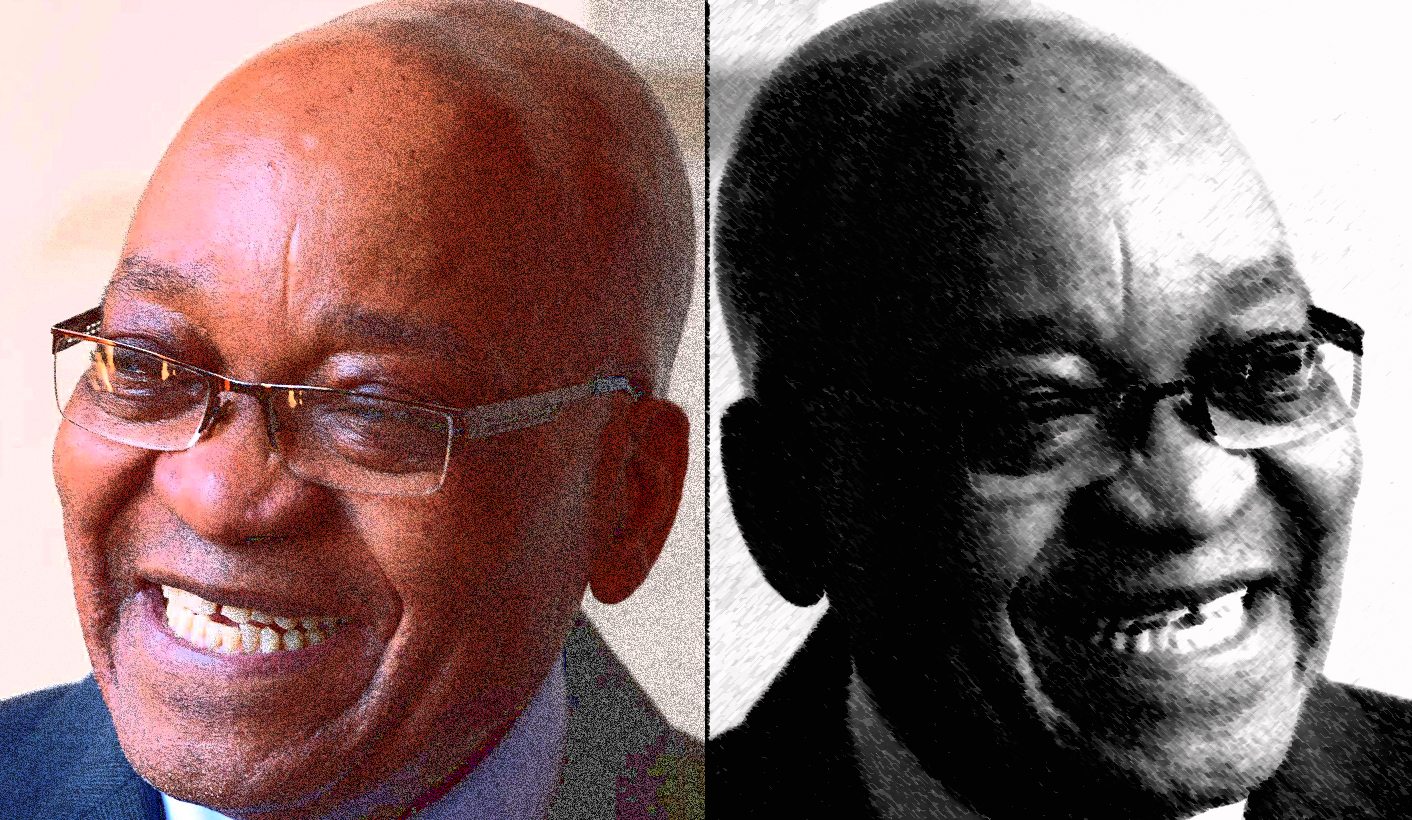 After two years of deflections, denials and parallel investigations, President Jacob Zuma, through lawyers, on Tuesday conceded the Public Protector’s remedial actions are binding and other Nkandla investigations are invalid. What does it mean for a president under pressure? GREG NICOLSON reports from the Constitutional Court.

Zuma has steadfastly maintained that the investigation by Police Minister Nkosinathi Nhleko found that there were no upgrades to his Nkandla home requiring Treasury to evaluate how much he should pay for non-security upgrades. His position has not changed since the Public Protector Thuli Madonsela released her report ‘Secure in Comfort’ almost two years ago. Clearly Zuma’s game plan was to promote the non-findings of compromised investigations and question the Public Protector’s powers.

On Tuesday, Zuma, represented by Advocate Jeremey Gauntlett did a volte-face. In a complete about turn he contradicted two-years of denials and undermined the many ANC members of Parliament who strenuously defended the president. Gauntlett said the president has since November, “perhaps with incremental clarity”, been trying to comply with Madonsela’s remedial action that he must repay a reasonable portion of the non-security related upgrades at Nkandla that his family was found to have unduly benefited from.

Nhleko, Gauntlett said, “has in a sense shot his bolt by releasing a report that makes, you might call them, pre-emptive findings”. Gauntlett said Nhleko’s report should have no standing in law and unless taken under review the Public Protector’s remedial actions should be binding.

That means all that sweat, the conjuring of fire pools, was for nothing.

“We accept that in the present case what [the Public Protector] has directed would be administered action which would stand and bind unless reviewed,” said Gauntlett, speaking for the president.

Previously, Zuma and his allies have argued that the Public Protector’s findings are not binding. The president has backed up his claims that he does not have to pay for the upgrades by relying on other Nkandla investigations.

“I must respectfully disagree with your assertion that reports of the Public Protector are by law not subject to any review or second guessing by a minister and/or cabinet and the findings made and remedial action taken by the Public Protector can only be judicially reviewed and set aside by a court of law,” Zuma wrote to Madonsela in 2014. This, in direct contravention to his position on Tuesday.

According to his lawyer, Gauntlet, the president now understands the Public Protector’s remedial actions are binding and the police minister’s report is worth nothing. Gauntlett argued that Zuma came around to the point after the judgment on the Public Protector’s powers last year in the case between the Democratic Alliance (DA) and the SABC.

Accepting both the Constitution’s directive that the Public Protector’s findings should be binding unless taken on review and that Zuma took his time understanding the law, Gauntlett was adamant, however, that the Constitutional Court should not bother making a finding that Zuma has breached the law.

“The court will be mindful why there is this enthusiasm for more orders,” he said, indirectly talking politics.

“This is a delicate time for society and the concern that we have is that if any time either the official opposition or the EFF that they wish to bring impeachment proceedings they of course have that right and they may do so at any time as they have done so in the past. But what would be wrong would be for this court to be […] into the position to making some form of wide condemnatory order which would be used effectively for provisional sentence for impeachment in Parliament, to say this president violated, failed when what it has to face is really thus question, why these declaratory orders, what is the utility of them?” asked Gauntlet.

His admissions that the president had erred in law, while claiming they were justifiable mistakes, were a last attempt in a failed case at trying to prevent the court from finding that the president has violated the Constitution, which is, of course, exactly what the Economic Freedom Fighters and DA are pushing for.

Advocate Wim Trengove, for the EFF, earlier argued, “The principles at stake are: the Public Protector may make binding orders; the president and the National Assembly acted in breach of the Constitution by defying those orders. Those are the principles which we submit are at the heart of this case.”

Trengove argued that the president and National Assembly violated the constitutional duty to assist and protect the Public Protector when they viewed her remedial actions as mere recommendations and that Zuma violated his oath of office and ethical duties by attempting to protect his ill-gotten gains.

“It violated the Constitution in its failure to call him to account at all,” said Trengove on the National Assembly and Speaker Baleka Mbete’s decision to view the Public Protector’s remedial actions as recommendations and its support for parliamentary processes that exonerated Zuma. “They didn’t do what they had to do which was to call the president to account.”

While Trengove gave Zuma and the National Assembly the benefit of the doubt, accepting they may have not known the law, Advocate Anton Katz for the DA went further. “The real issue is: is her remedial action enforceable until set aside on review? Yes.”

Katz suggested they had tried to defy the law and the victims were poor South Africans who hope for a better future but are inhibited by corruption. “That’s what this case is about,” he said.

Advocate Gilbert Marcus, representing the Public Protector, pointed out how even before last year’s Supreme Court of Appeal judgement, Madonsela had told the president he has no legal right to ask the police minister to determine whether he owes anything. Even Nhleko’s lawyer later admitted the foundation for his report (which turned a swimming pool into a fire pool) was flawed.

While even the president’s advocate admitted the Public Protector’s remedial actions are binding unless taken on review, the National Assembly’s lawyer Advocate Lindo Nkosi-Thomas held the line. “[Thuli Madonsela] cannot look to Parliament and expect of Parliament to merely rubber stamp without applying its mind because Parliament would be acting too eagerly to enforce,” she said under pressure from Chief Justice Mogeong Mogeng.

As if she hadn’t heard the president’s capitulation, she refused to say whether the Public Protector’s remedial actions are binding or whether the National Assembly had failed in to exercise oversight of the executive.

Tuesdays hearing saw more developments on the Public Protector’s recommendations than two years of the ANC’s partisan defence of its president through quasi-official channels. Opposition parties are determined not just for Zuma to pay back part of the money spent on non-security upgrades at Nkandla -which he has agreed to do -they want the Constitutional Court to make a finding against the president and to uphold the powers of the Public Protector.

“We have a president and a National Assembly who treated the Public Protector with disrespect for almost two years in violation of the Constitution. Then simply to say ‘I’ll pay back the money’ is not good enough,” said the EFF’s Trengove. They want an order from the highest court in the country declaring the violations and reaffirming the Public Protector’s powers. They want the court to state that the president has violated the Constitution and his oath of office.

And if the president is in serious violation of the law or Constitution, or commits serious misconduct, he can be removed from office by the National Assembly. While that is unlikely, since it requires votes of at least two-thirds of the from the National Assembly, a Constitutional Court finding against the president would be a significant campaign boost for opposition parties even if they can’t boot him out.

On Tuesday, the DA’s James Selfe said, “The fact is that unless the powers of the Public Protector are confirmed by the highest court of the land, there is always the danger that another institution of state will, in future, seek to ‘second-guess…findings and ignore…recommendations’ of the Public Protector.”

EFF leader Julius Malema said, “We have no problem with the man. We have a problem with everyone who is not complying with the Constitution of the Republic of South Africa. So we are saying that today the case of the executive is before court, explaining why he must not pay. They gave us a ‘Mickey Mouse’ deal which we have rejected. We are saying to the Constitutional Court, please do the right thing. This matter is in the interests of the nation.”

The Constitutional Court on Tuesday reserved judgment. Its first task will be deciding whether the case falls under its purview. Zuma’s capitulation is an attempt to avoid the next step: a declaratory order that the president and National Assembly have violated the Constitution. But after two years of consistently denying culpability and undermining the Public Protector, the president’s admissions on Tuesday have already exposed his lack of respect for the law and his willingness to do almost anything, and sacrifice anyone, for his own benefit. DM

The original photo of President Jacob Zuma by Reuters.