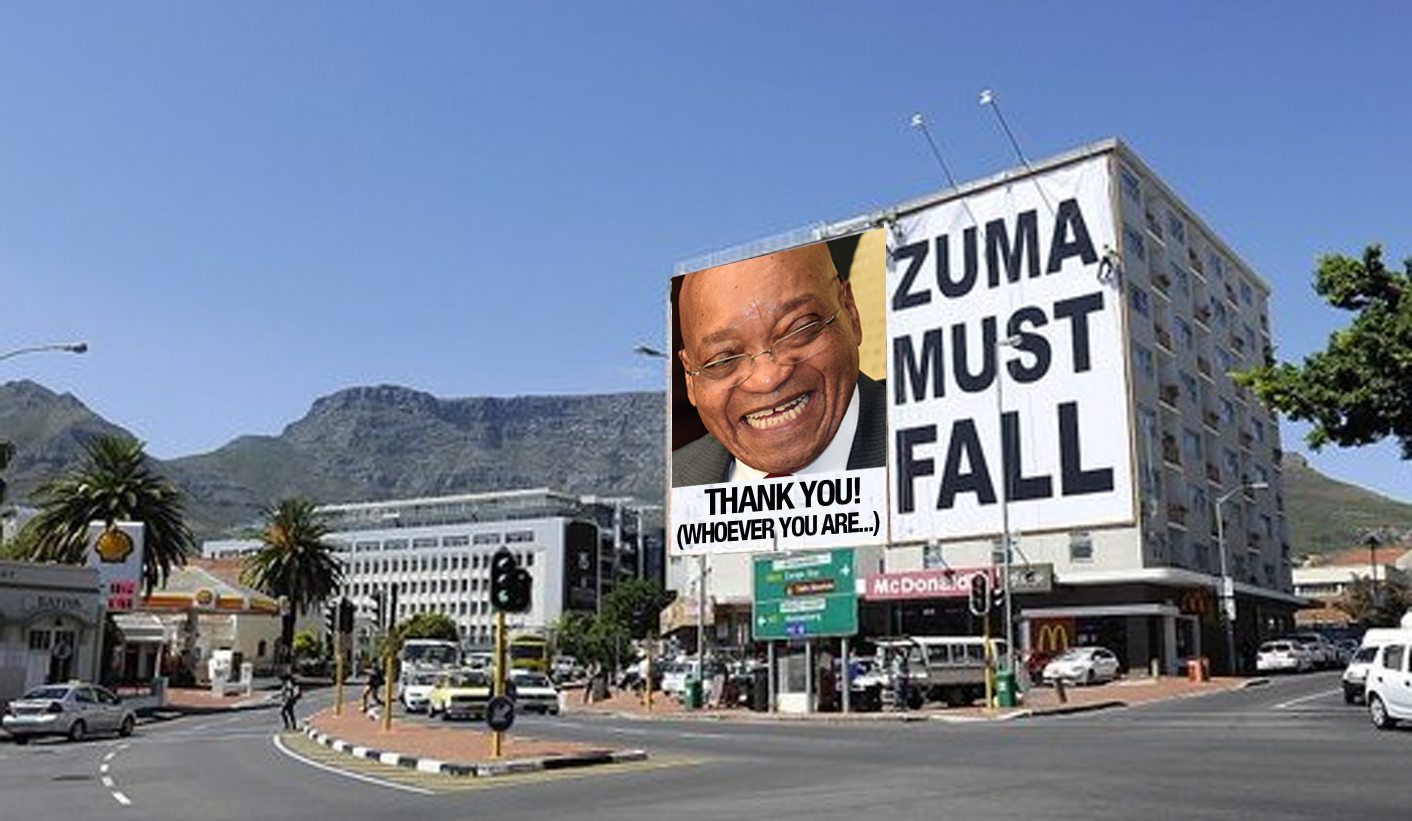 An unnamed person or group in Cape Town shelled out about R500,000 to make and rent the space for a giant banner with the words “Zuma Must Fall”. On Saturday, a day after it was erected, ANC supporters ripped it to shreds. The #ZumaMustFall movement, which says it had nothing to do with the erection of the banner, claimed that the message had nevertheless struck home and their campaign has received more support. From whom? With what objective? The #ZumaMustFall campaign is, in fact, prompting exactly the opposite result from the one it intends to achieve. By RANJENI MUNUSAMY.

The #ZumaMustFall movement was formed as a result of President Jacob Zuma’s firing of Nhlanhla Nene as Finance Minister in early December that caused the Rand to go into free fall and inflicted major financial losses to the economy. On 16 December, the Day of Reconciliation, marches were held in different cities for people to demonstrate their anger at the president’s decision and unhappiness with his leadership. Another march is apparently planned in Cape Town in February, on the day of the State of the Nation Address.

A #ZumaMustFall website says their movement is “actively campaigning for the recall of Jacob Zuma from the office of the President of the Republic of South Africa”. The movement, which says they have no political affiliation or “racial definition”, giddily claims to represent “the voters and patriotic citizens from all political parties across the Republic of South Africa and those living and/or working abroad”.

“In light of the spreading social unrest, economic decline, political instability and growing questions surrounding the constitutionality of certain decision-making within the Presidency, the #ZumaMustFall members believe Jacob Zuma to be the wrong candidate to lead our country further.”

And here is where they expose how misguided the campaign is:

“Therefore, we are giving the current electorate the opportunity to recall Jacob Zuma, and place an individual of integrity and moral fibre at the helm in order to restore political calm, social cohesion and inclusive economic prosperity for all South Africans.”

The term “recall” was popularised in 2008 when the ANC national executive committee (NEC) used one of its powers granted by the party’s constitution and removed former president Thabo Mbeki from office. The ANC constitution gives the NEC the power to “recall any public representative”. The “recall” option is only available to the ANC, not to opposition parties, civil society or “the current electorate”.

The country’s Constitution spells out how a president can be removed from office. This is through a resolution adopted in the National Assembly, with a supporting vote of at least two thirds of the members. The grounds for such a resolution are a serious violation of the Constitution or the law, serious misconduct or the inability to perform the functions of office.

The only other way for a president to be removed from office outside of ANC processes is through the Democratic Alliance’s (DA) often-attempted, often-failed option of a motion of no confidence. In this case, the motion must be passed in the National Assembly through a vote supported by a majority of members. If the motion is passed, the president must resign. With the current composition of Parliament, a significant number of ANC MPs would have to vote with the opposition to either remove the president or pass a motion of no confidence against him.

The #ZumaMustFall campaign is trying to lobby for an option outside what is constitutionally possible. How must Zuma fall? Through what legal or constitutional means can this happen? Secondly, who are the marches and the banner erected in Cape Town speaking to?

It appears that the campaign is aimed at building momentum and turning more public sentiment against Zuma. While this might make Zuma more unpopular, it cannot affect him in real terms. He is not eligible to run again for the position of state president so a defiance vote cannot target him personally.

Zuma, however, is president of the ANC and therefore will be the face of party’s local government elections campaign. #ZumaMustFall can therefore be aimed either at putting pressure on the ANC to recall Zuma because his unpopularity would hurt the party, or it is an anti-ANC campaign. If #ZumaMustFall means #ANCMustFall, it cannot claim to be apolitical.

The ANC perceives #ZumaMustFall as not only being anti-ANC but also racist. ANC supporters who tore down the banner in Cape Town certainly claimed it was racist.

What #ZumaMustFall effectively does is force the ANC to rally behind the president and defend him. In a statement on Sunday, the ANC said the campaign was aimed at polarising society. And although the DA has disowned the initiative, it is being lumped together with it and efforts to preserve white privilege.

“The African National Congress calls on all South Africans to declare war on racism and for political parties to refrain from undermining democracy through calls that undermine a democratic outcome. The uninformed call that President Zuma must fall are a ploy to divert a real conversation on racism that finds expression in the comments of a minority belonging to a particular party that is intent of achieving the impossible return to a racist past,” ANC spokesperson Zizi Kodwa said.

“It is evident that this campaign, which is privately sponsored by particular formations can only polarise society resulting in strained relations amongst our people,” he said.

Zuma has not been oblivious to the pressure and negative public sentiment. But he knows how to turn attacks on him in his favour. Speaking at a Jacob Zuma Foundation event in Durban on Friday, Zuma said people attack him because he never went to school. “I suffered because I never went to school and that is the reason why I decided to educate myself… There are people whose business is to say that we cannot have a man who never went to school running a country.

“We must rubbish him 24/7… No one has ever said it is a miracle for this man to have become president and wrote a column about it,” Zuma was quoted by News24.

The president said one of the most painful things was that when someone came from a poor background, people tended to undermine that person even when they were no longer poor. “They can’t believe that you come from a poor background and that you have managed to make something of yourself and so they try to make a laughing stock out of you. They try to make you feel like you are not capable and make you feel like you don’t know what you are doing and [you are] just useless.”

Zuma got to the Union Buildings by claiming victimhood and a political conspiracy against him. While he can no longer use the excuse of a political conspiracy to explain his failures, projecting himself as the victim of those who deride poor black people will have resonance. Many poor black people remain frustrated by a system that discriminates against them and prevents their advancement. What Zuma said will therefore be relatable.

Zuma promised to expose those who treated him badly in a book he plans to write when he retires.

It is true that a growing number of people are angry with Zuma over the Nkandla security upgrades, his poor leadership and the Nene incident. Many people in the ANC realise that Zuma is a liability to the party and that his presidency has been extremely damaging to its image and popularity. However, initiatives like #ZumaMustFall and the DA’s attempts to pass a motion of no confidence in the president force the ANC to close ranks behind Zuma. Because they morph into campaigns against the ANC, party members and supporters go on the attack and the messaging is lost on them.

The ANC will only respond to pressure from inside its ranks and, so far, #ZumaMustFall has not had any palpable impact inside the party. Zuma does not have significant opposition against him inside the ANC to be challenged by other senior leaders or to be taken to task by the NEC for his actions.

If #ZumaMustFall is gaining support, it is in all likelihood from people who would not be voting for the ANC anyway.

The real question is how ordinary ANC supporters feel about the president and their organisation under his leadership. Will they continue to vote ANC? If not, will they abstain from voting or vote for another party?

These questions will not be answered through hashtagged marches or advertising theatrics. It will take real political work and on-the-ground campaigning that speaks to people across the country, including ANC members.

For as long as this is not happening, Zuma is untouchable. DM