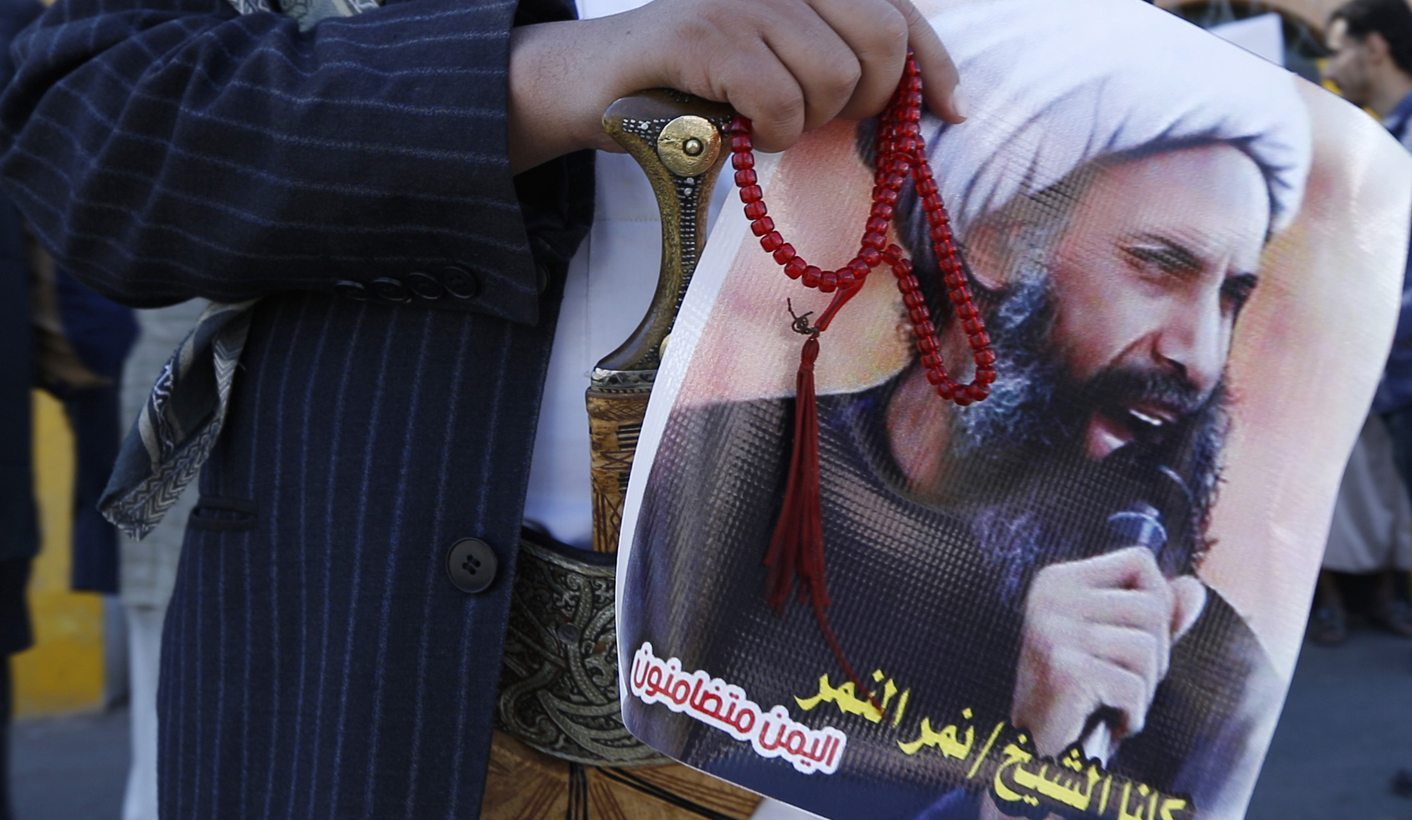 Saudi Arabia executed a prominent Shi'ite Muslim cleric and dozens of al Qaeda members on Saturday, signalling it would not tolerate attacks, whether by Sunni jihadists or minority Shi'ites, and stirring sectarian anger across the region. By Angus McDowall for Reuters.

RIYADH, Jan 2 (Reuters) Hundreds of Shi’ite Muslims marched through Qatif district of Saudi Arabia’s Eastern Province in protest at the execution of cleric Nimr al-Nimr, an eyewitness said. They chanted “down with the Al Saud”, the name of the ruling Saudi royal family.

Nimr, the most vocal critic of the ruling Al Saud among the Shi’ite minority, had come to be seen as a leader of the sect’s younger activists, who rejected the quiet approach of older community leaders for failing to achieve equality with Sunnis.

Most of the 47 killed in the kingdom’s biggest mass execution for decades were Sunnis convicted of al Qaeda attacks in Saudi Arabia a decade ago. Four, including Nimr, were Shi’ites accused of involvement in shooting policemen.

The executions took place in 12 cities in Saudi Arabia, four prisons using firing squads and the others beheading. In December, al Qaeda in the Arabian Peninsula threatened to retaliate against Saudi Arabia for any execution of its members.

Riyadh’s main regional rival Iran and its Shi’ite allies immediately reacted with vigorous condemnation of the execution of Nimr, threatening Saudi Arabia and the Al Saud with severe repercussions, in protests ranging as far afield as India.

In Iraq, prominent religious and political figures called for a severing of ties, calling into question fence-mending efforts by Riyadh that could help boost a regional alliance against Islamic State militants.

“A harsh revenge will strike the Al Saud in the near future and cause the fall of this pro-terrorist, anti-Islamic regime,” the Guards said in a statement carried by the Mehr news agency.

However, the executions seemed mostly aimed at discouraging Saudis from jihadism after bombings and shootings by Sunni militants in Saudi Arabia over the past year killed dozens and Islamic State called on followers there to stage attacks.

Islamic State called on Saturday on supporters to attack Saudi soldiers and police in revenge for the executions of militants, in a message on Telegram Channel, a prominent vehicle for the group’s backers, the SITE monitoring group reported.

Saudi Arabia’s ruling Al Saud family has grown increasingly nervous in recent years as Middle East turmoil, especially in Syria and Iraq, has empowered Sunni militants seeking to bring it down and given room to Shi’ite Iran to spread its influence.

The simultaneous execution of 47 people – 45 Saudis, one Egyptian and a man from Chad – was the biggest mass execution for security offences in Saudi Arabia since the 1980 killing of 63 jihadist rebels who seized Mecca’s Grand Mosque in 1979.

The 43 Sunni jihadists executed on Saturday, including several prominent al Qaeda leaders and ideologues, were convicted for attacks on Western compounds, government buildings and diplomatic missions that killed hundreds from 2003-06.

The four Shi’ites were convicted of involvement in shootings and petrol bomb attacks that killed several police during anti-government protests from 2011-13 in which over 20 members of the minority sect were also shot dead by the authorities.

Under Saudi Arabia’s reading of Islamic Sharia law, such attacks are interpreted as “banditry”, carrying an automatic sentence of death followed by public display of bodies on gibbets.

Most jihadist groups follow a radical interpretation of the Salafi branch of Islam, the strict Sunni Muslim school that was developed in Saudi Arabia and is still followed by its clergy; but they have long regarded Riyadh as an enemy.

Government-appointed clerics have for years denounced al Qaeda and Islamic State as religious “deviants”, while the government has cracked down on jihadists at home, squeezed their funding streams abroad and stopped them travelling to fight.

However, critics of the Al Saud ruling family say it has not done enough to tackle sectarian intolerance, hatred of infidels and praise for the principles of violent jihad propagated by Saudi clerics, which they see as contributing to militancy.

Mustafa Alani, a security analyst close to the Interior Ministry, commented: “There is a huge popular pressure on the government to punish those people. It included all the leaders of al Qaeda, all the ones responsible for shedding blood. It sends a message.”

Analysts have speculated that the execution of the four Shi’ites was partly to demonstrate to Saudi Arabia’s majority Sunni Muslims that the government did not differentiate between political violence committed by members of the two sects.

That point appeared to be bolstered by the state-affiliated al Arabiya channel, which throughout Saturday showed graphics comparing Nimr and Faris al-Shuwail, an al Qaeda ideologue who was also executed, describing them both as “inciters”.

Human rights groups have consistently attacked the kingdom’s judicial process as unfair, pointing to accusations that confessions have been secured under torture and that defendants in court have been denied access to lawyers.

Riyadh denies torture and says its judiciary is independent.

Family members of the executed Shi’ites have vigorously denied they were involved in attacks and said they were only peaceful protesters against sectarian discrimination in the Sunni-ruled kingdom.

The cleric’s brother, Mohammed al-Nimr, said he hoped any response in Qatif would be peaceful, but activists said new protests were possible.

“My mobile is getting non-stop messages from friends, all shocked and angry…The fear is for the children among those detained,” an activist in Qatif told Reuters.

The Interior Ministry statement began with Koranic verses justifying the use of execution and state television showed footage of the aftermath of al Qaeda attacks in the last decade.

The executions are Saudi Arabia’s first in 2016. At least 157 people were put to death last year, a big increase from the 90 people killed in 2014. (Additional reporting by Sami Aboudi, Sam Wilkin, Noah Browning, Omar Fahmy and Katie Paul, editing by Ralph Boulton and John Stonestreet) DM

Photo: A Shi’ite protester carries a poster of Sheikh Nimr al-Nimr during a demonstration outside the Saudi embassy in Sanaa October 18, 2014. The Shi’ite Muslim minority in Saudi Arabia’s Eastern Province have long felt marginalised by the Sunni ruling dynasty, and protests for greater rights as part of the 2011 Arab Spring brought a crackdown on both protesters and demands for reform. But now, death sentences for three Shi’ite Muslims, including prominent dissident cleric Nimr, suggest that the region’s wider turmoil is further hardening attitudes toward the sect at home. The poster reads: “We all are Sheikh Nimr al Nimr.” Picture taken October 18, 2014. REUTERS/Khaled Abdullah