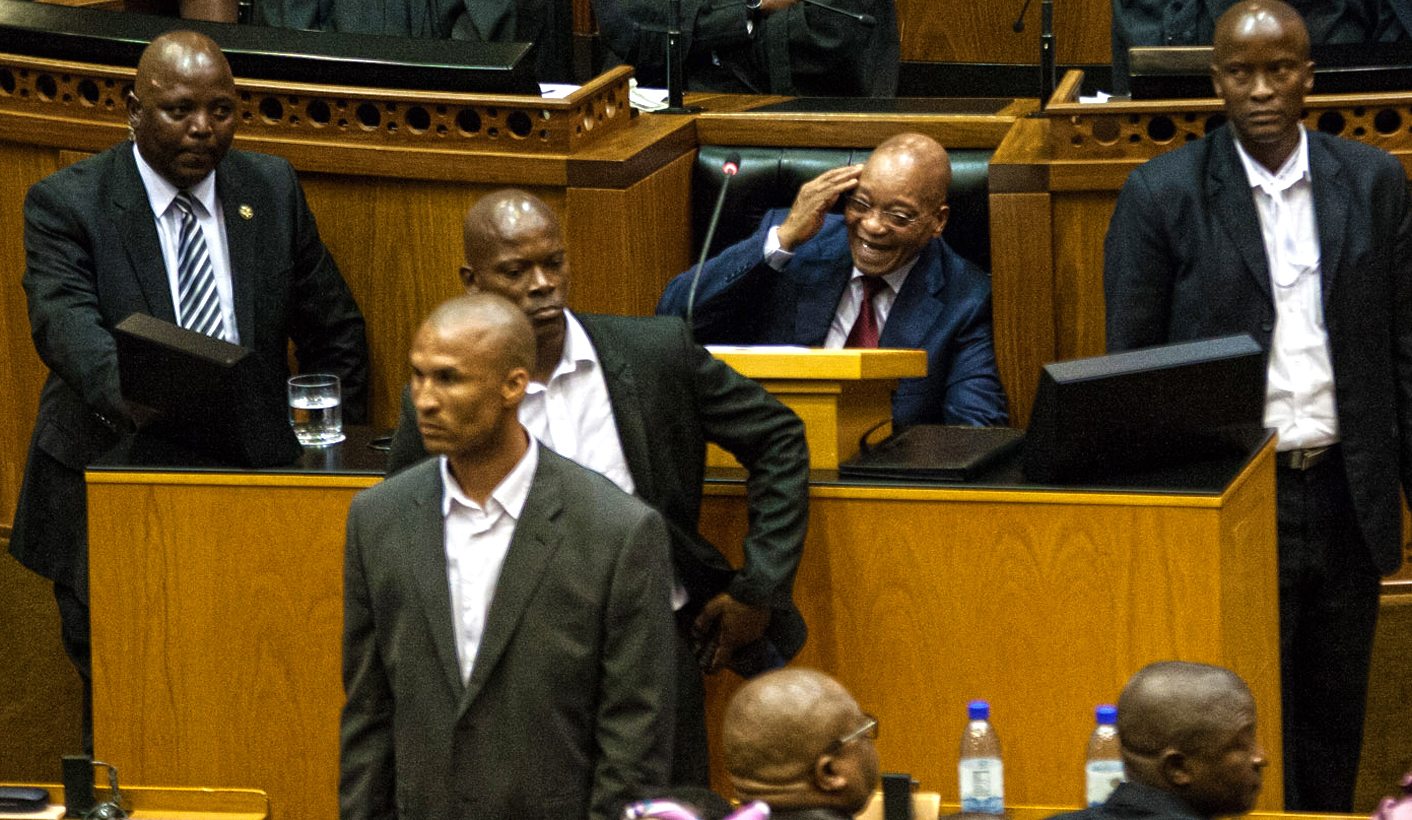 As this year began, so shall it end. It started with mayhem in Parliament, and by July we were in the winter of discontent. Now as we careen towards Christmas, we are in another season altogether, and it is ripe with chaos. By SISONKE MSIMANG.

We began the year led by a party too arrogant to accept its mistakes, and we end in the same way, lead by a ruling elite that has been forced to make its President humble himself, but has not yet admitted its own flaws. We began 2015 under the noxious haze of Nkandla, not knowing which represented the bigger problem, the party or the president. We end the year similarly puzzled. Many of us are beginning to understand that this is a riddle that cannot be solved and the one is just as bad as the other.

The photo of the year, shot by Greg Nicolson, captures the fundamental problems of this President and his party, and it points to the consequences of their increasingly hostile and dysfunctional rule. Depicting a giggling Zuma, the picture reminds us that the President’s chuckles are nothing new. We have been living with absurdity for so long that we have lost track of when the weirdness began.

The image is important not just for what is in it, but also for what it does not contain. The goons are in front of Zuma, protecting him physically, but there are also people who lurk in the shadows behind him like apparitions. They are almost impossible to see, but they are powerful as all ghosts must be. They move without being seen and yet their names are on everyone’s lips. They are shape-shifters – call them what you like: The Guptas, the Russians, the Premier League, the Chancellor house Directors. The ghosts live through parallel and unseen structures. We are told they exist, but it is difficult to pin them down.

The photo was taken on 12 February 2015, when one of our most shameful chapters was played out during the State of Nation Address. As she shielded the President from answering questions about his house of the hill the Honourable Speaker – one Baleka Mbete whose name will go down in history as having brought disgrace upon the democracy she was supposed to defend – called in the quasi-legal force of men in suits. They came in and surrounded the President.

Look at him; he is surrounded. The men in suits that are not uniforms derive their authority from somewhere, but it is not clear where from exactly or who they are. Their faces are stern and their guns are concealed – hinted at but not drawn. These men are dangerous because they are armed but also because they are not supposed to be here. Their presence in what is supposed to be a chamber of peace and discourse is a threat to democracy.

The President’s laughter is even more dangerous than the men in suits with their guns. As usual it is out of context and so it causes those watching the scene to be alarmed. We are discomfited not because he is happy but because he is not sad.

In June, the South African government, violated a court order compelling it to detain Sudanese President Omar al-Bashir while he was in the country for an African Union summit. Al Bashir – who has been indicted by the International Criminal Court for crimes against the darker-skinned inhabitants of his own country – sped away in an illegal convoy with the tacit approval of the government. Afterwards, Blade Nzimande gleefully crowed, “we liberated this country…. We are never going to ask for permission from forces who were never with us in the trenches.”

Because we are living in the era of strategic silences, no one in the ruling party bothered to query the location of the trenches to which the Honorable Nzimande referred. Instead, the judiciary was forced to call for an unprecedented meeting with the executive: Difficult things had to be said and the men in the ill-fitting suits and the men in the long robes had to to behave as though a line had not been crossed even it was all there for everyone to see.

Having dealt crushing, but not fatal blows to the office of the Public Protector, parliament and the judiciary, the wrecking ball took aim at the economy. As the Chair of the board of the national carrier went rogue, further destabilising a structure that had already guzzled billions of taxpayer rands, the President made a crucial error. He over-reached. The behaviour of his merry band of backers had led him to believe that they supported him unreservedly. For whatever reasons, he was wrong.

Suddenly this picture makes a lot of sense. Look again at what is not in the frame. The most important absence in this photo is the ANC. Zuma sits alone, laughing and chuckling in loneliness while surrounded by the security apparatus of the state. The political movement that produced him is nowhere to be found. We are told that the African National Congress exists somewhere beyond the bounds of what can be captured on film but the country is no longer sure. All we can see is a larger-than-life Zuma, and a man whose finger is already on the trigger. As the year ends this photo comes into focus once again, not only for what it depicts – which is breathtaking in its hints of violence– but for what its symbolizes. Once again we have a giggling president, surrounded by people whose status is unclear. They are dangerous that much is clear, but they wear no uniforms and so they are accountable to no one. The president has set up a parallel system of rules. He is advised by people we cannot see and so we cannot know or assess the interests that back him. DM