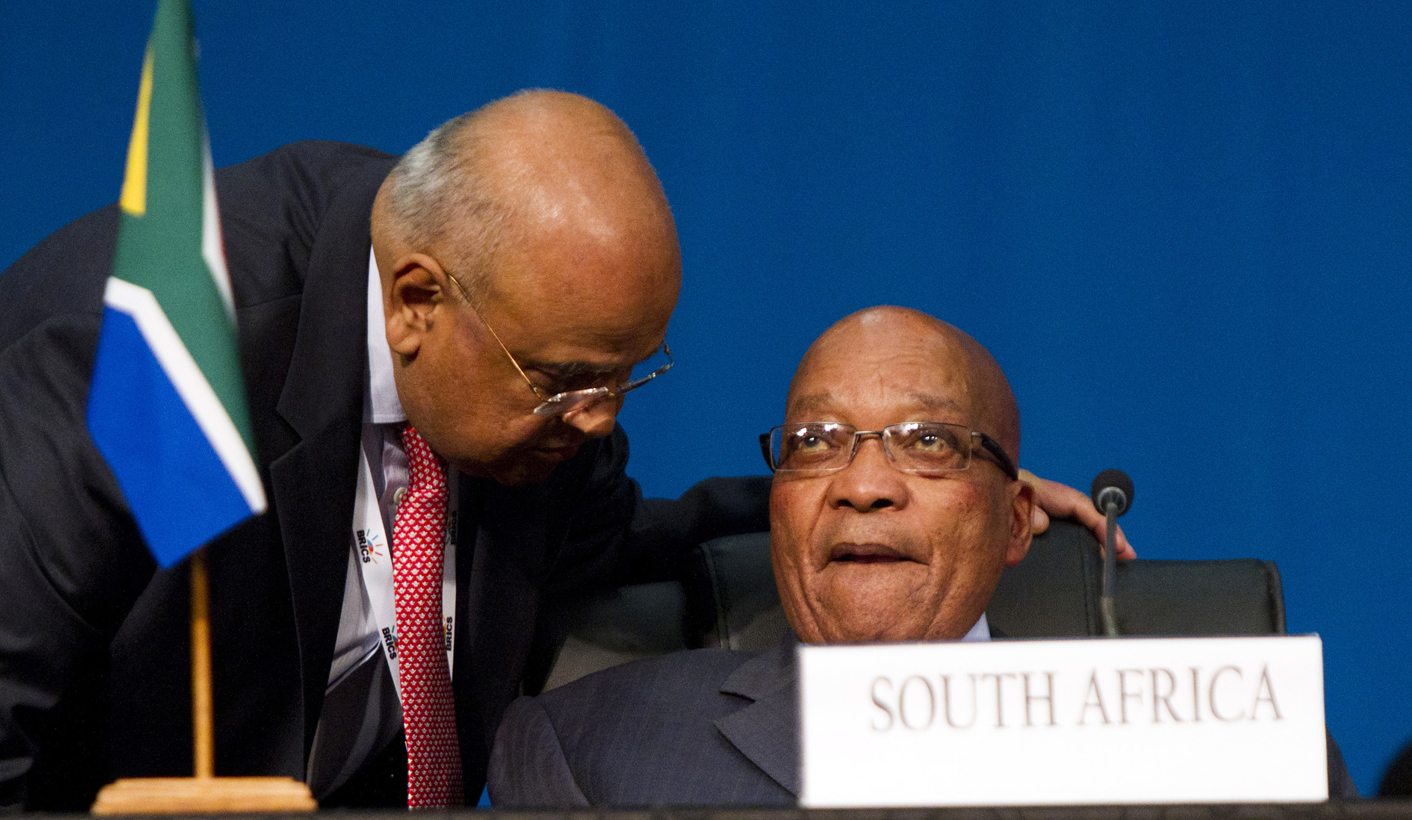 The drama and financial carnage precipitated by the firing of former Finance Minister Nhlanhla Nene on Wednesday resulted in an unprecedented backpedal by President Jacob Zuma on Sunday night. The presidency announced via an email statement that after receiving “many representations” and “after serious consideration and reflection”, Zuma decided to appoint Pravin Gordhan as Finance Minister and move David van Rooyen to the Cooperative Governance portfolio. The president has been forced into making an embarrassing about-turn and has been exposed as a leader who has lost his grip. By RANJENI MUNUSAMY.

On Thursday, the day after the shock announcement of Nhlanhla Nene’s axing as Finance Minister, President Jacob Zuma was apparently unmoved by the explosion on markets and in society. He believed the commotion would die down, the Rand would recover and that he did not owe anybody any explanations. At the swearing in ceremony of David van Rooyen as Finance Minister, Zuma felt no need to respond to the public outrage or provide any details about why he unceremoniously removed Nene.

But by Friday, Zuma and his close aides were being bombarded by angry and concerned messages, and the irrecoverable financial losses to the country stemming from his poorly considered move began to hit home. It came as a surprise that ministers at a post-Cabinet briefing confessed that they had no idea Nene would be fired. It was also an eye-opener that the ANC did not rally to his defence in the manner it usually have before. The South African Communist Party (SACP) and Cosatu also held back.

For the first time since he was charged with rape, Zuma was isolated and condemned.

As the Rand plunged further in Friday afternoon’s trade and the bloodletting on the markets continued, the presidency embarked on a damage control exercise to stabilise the situation. A media statement on Friday evening stated Nene was removed from Cabinet as he was a candidate for the new BRICS bank to be based in Johannesburg. Government remained “committed to adhering to the set expenditure ceiling while maintaining a stable trajectory of our debt portfolio”, the statement said.

Twenty-two minutes later, a second statement was released rejecting media speculation that there would be another Cabinet reshuffle and that some ministers would be axed. Two hours later, a third statement was dispatched saying Cabinet ministers would not have known about the appointment of a new Finance Minister as there was no obligation on the president to inform them.

The statements did not have the effect of quelling public outrage. The biggest source of anger appeared to be the speculation that Nene had been chopped as he crossed swords with South African Airways (SAA) board chairperson Dudu Myeni, who was rumoured to be romantically linked to Zuma. In anticipation of the president being thrashed in the Sunday press, the presidency issued a fourth statement on Saturday afternoon to clarify issues around SAA and Nene’s firing.

In an extraordinary move, the presidency also denied the rumours of a romance between Myeni and Zuma, and that they share a child. The statement said Myeni was chairperson of the Jacob Zuma Foundation and relationship with the president was “purely professional”.

Meanwhile the presidency was being swamped by requests for meetings and calls with the president, from captains of industry, ambassadors, financial experts, former government leaders and ANC and alliance leaders. On Friday night, Zuma held a series of meetings, among these with SACP general secretary Blade Nzimande and Cosatu president S’dumo Dlamini. The two apparently told him that they were no longer able to protect him and that the removal of Nene was sparking a rebellion.

On Saturday, talk that Deputy President Cyril Ramaphosa would resign was gaining ground. Ramaphosa had not been seen since Nene’s firing and did not attend Van Rooyen’s swearing-in ceremony. Both Ramaphosa and Nene had worked on the SAA turnaround together and speculation was that Nene had dug in his heels on the Airbus deal after having consulted Ramaphosa. This raised questions about the state of the relationship between Zuma and Ramaphosa.

If Ramaphosa had walked, the market was destined for a crash as he was brought in as Zuma’s deputy specifically to calm investors and big business.

On Sunday, Zuma was meant to address the ANC Mpumalanga provincial conference around mid-morning. But he was still being bombarded with warnings about the economic slaughter in the coming week if something was not done urgently to bring stability. When Zuma addressed the conference on Sunday afternoon, he made no mention of the turmoil of the last few days, instead preaching unity in the ANC and urging hard work to campaign for next year’s local government elections.

Behind the scenes, however, Zuma was succumbing to the pressure in what one source called “heavy duty manoeuvring”. It is not clear whether he was aware of and also felt the pressure of the #ZumaMustFall campaign, but sources say his aides had been watching the mounting public anger on social media.

Zuma had few options in terms of who to appoint in order to calm the markets and restore the credibility of the Treasury. He had the option of reappointing Nene but that would have exposed the story of the BRICS bank position as a fabrication. There was also the risk that Nene would say no as their relationship had been breaking down for several months, during which Nene had been preparing for his axing.

Zuma could have appointed the Deputy Minister of Finance Mcebisi Jonas, but it is believed that the advice he received was to “go for someone big”. Gordhan was already in Cabinet, serving at the president’s pleasure, and was an obvious choice. The Rand immediately responded to Gordhan’s appointment and went into recovery mode.

A friend of Gordhan’s, who spoke to him shortly after the presidency made the announcement, said the minister was not aware of his new appointment until he had been called by a journalist. But another source said Gordhan had been convinced to take the job as “the nation had to come first” and he was the only person whom people would believe would stick to the path of fiscal discipline.

Gordhan is likely to stick to the positions Nene took on the nuclear build programme and the SAA deal, and like in the past, refuse to bow to pressure to use the Treasury as a feeding trough for Zuma and the shadowy figures behind him.

It is not clear what Van Rooyen had been told about his move to the Department of Cooperative Governance and Traditional Affairs, as this is another hot potato position in light of the local government elections next year.

On Wednesday Zuma was in a position of extreme strength when he removed Nene, believing that the move would assert his authority and shut down dissent. By Sunday, he was exposed as a weak leader who acted recklessly without proper advice, appointing a rookie to act as a political handyman rather than the head of the Treasury. Last night, alliance sources said there was a strong possibility that Myeni might be removed from the SAA board as part of the damage control mission.

Zuma has issued apologies in the past, after his rape trial and after making homophobic statements. But in six and a half years as president, he has never before had to make a climb down, and a spectacular one at that. This is an acknowledgement that he does not know what he is doing, and has completely undermined the credibility of his administration.

Had Gordhan declined the appointment and Ramaphosa quit, South African could have tumbled towards an economic crash. The ANC might have been pressured to reconsider its deployment to the presidency if that had happened. As it is, Gordhan stepped in on a rescue mission for the economy but also inevitably saved Zuma’s skin. DM