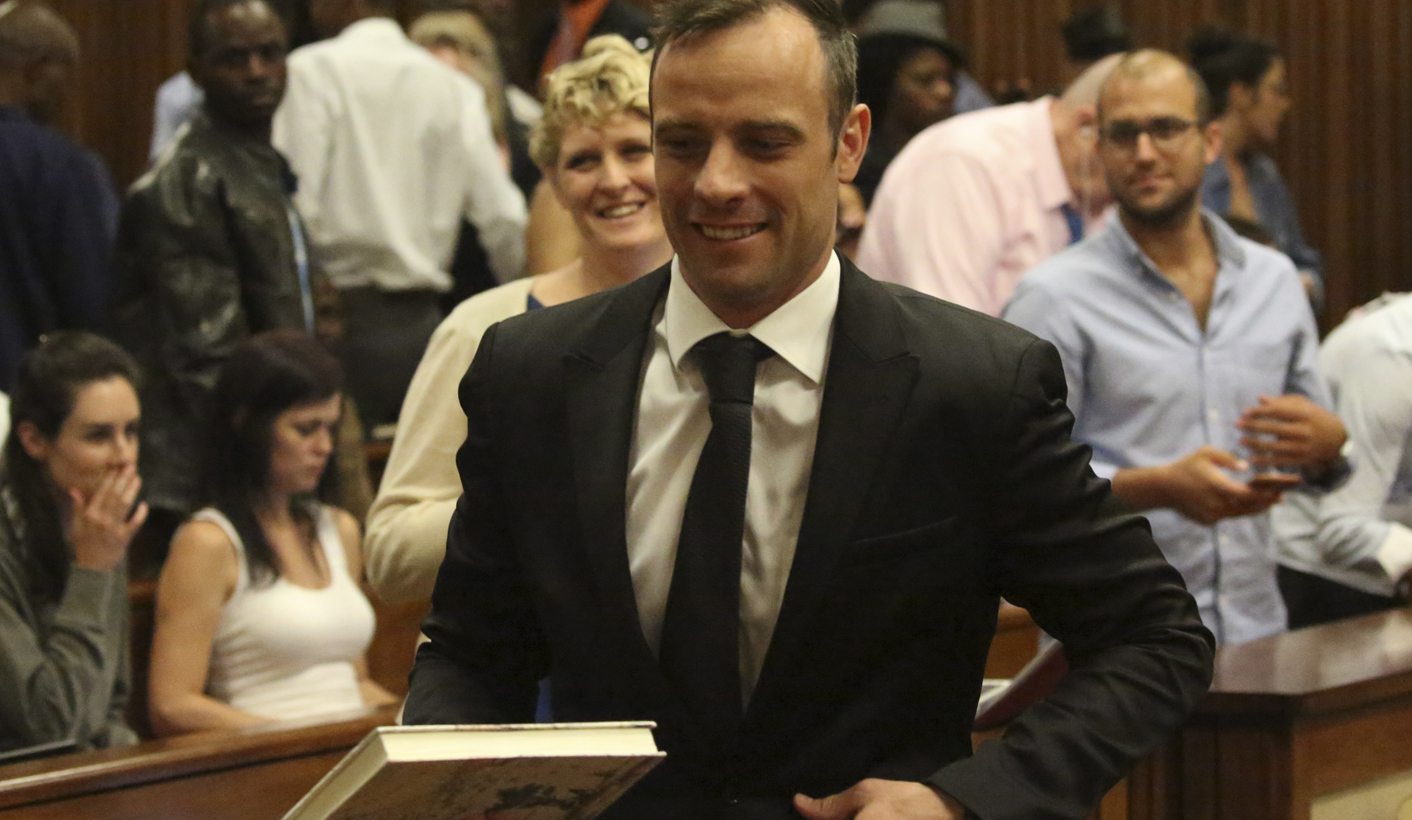 Appearing in court for the first time since he was sentenced last year, a much more composed Oscar Pistorius was told that he did not have to return to prison – yet, anyway. The disgraced Paralympian was granted bail, as long as he observes the conditions of his house arrest. Next stop: Constitutional Court. By SIMON ALLISON.

Oscar Pistorius will remain under house arrest after the prosecution declined to oppose bail, at a hearing in the North Gauteng High Court in Pretoria on Tuesday morning.

“He has proved that he is not a flight risk,” said Ledwaba.

The Paralympian, dressed in a dark suit and tie, was present in the court, remaining calm and composed throughout, even sharing a joke with his lawyers occasionally. Before court began, he had agreed to by the strict conditions of his house arrest, which mostly confine him to his uncle Arnold Pistorius’ mansion in Pretoria.

Pistorius shot and killed girlfriend Reeva Steenkamp on Valentine’s Day in 2013. He was found guilty of murder last month after the Supreme Court of Appeal overturned a previous conviction for culpable homicide. The murder conviction comes with a minimum sentence of 15 years in prison.

Noticeably absent from the court was June Steenkamp, Reeva’s mother, who has attended most other legal proceedings. Also missing were the large crowds of onlookers, both Pistorius fans and critics, which were a striking feature of the original trial.

The purpose of Tuesday’s court proceedings was to determine whether Pistorius should return to prison, pending a new sentencing hearing, or if he will remain under house arrest. Pistorius was released into correctional supervision earlier this year after having served one-sixth of his original sentence.

At the bail hearing, Pistorius’ legal team, led by advocate Barry Roux, made clear their intention to challenge the appeal court’s decision in South Africa’s highest court, the Constitutional Court. This new appeal will be heard next year, prior to any sentencing hearing. Consequently, a date for the sentencing hearing was not set.

Roux said that Pistorius did not pose a flight risk. “He is a well-known person, he’s got a disability. He’s abided by all the bail conditions, all the time, and he’s got a history where he’s shown that he commits himself to the structures of the criminal justice system.”

Chief prosecutor Gerrie Nel said that the severity of Pistorius’ crime merited harsh bail conditions. “We have a convicted murderer applying for bail. The conditions therefore should be stricter,” he said.

The prosecution, however, was unsuccessful in their argument that Pistorius should not be allowed to leave the house at all without prior permission. Judge Ledwaba said that this requirement created unnecessary work for the investigating officer required to grant permission, and instead granted Pistorius permission to leave the house between the hours of 7am and midday.

He will be electronically tagged to monitor his compliance with this condition, and will no longer be required to perform community service.

Pistorius’ R10,000 (£460) bail payment is due by Friday 11 December. This is a trivial sum in comparison to the R1 milllion (£46,000) guarantee he lodged as a guarantee ahead of his original trial. This illustrates the toll that these expensive legal proceedings has taken on the finances of Pistorius, once a multimillionaire.

“We also agreed to an amount of bail of R10,000 because in his affidavit he’s discussed he doesn’t have the means to pay a higher amount,” said Nel.

Pistorius is next scheduled to appear in court on April 18, to confirm the next steps in the legal process. DM

Photo: Convicted murderer, South African Olympic and Paralympic athlete Oscar Pistorius (C) reacts as he leaves after his bail hearing proceedings at the Gauteng Division of the High Court, Pretoria, South Africa, 08 December 2015. Pistorius will appeal his murder conviction in South Africa’s highest court, his lawyer said in court after Pistorius was granted bail in Pretoria. Pistorius fired four shots at Reeva Steenkamp through a locked toilet door at his home in Pretoria in the early hours of Valentine’s Day 2013. She died at the scene. EPA/SIPHIWE SIBEKO /POOL