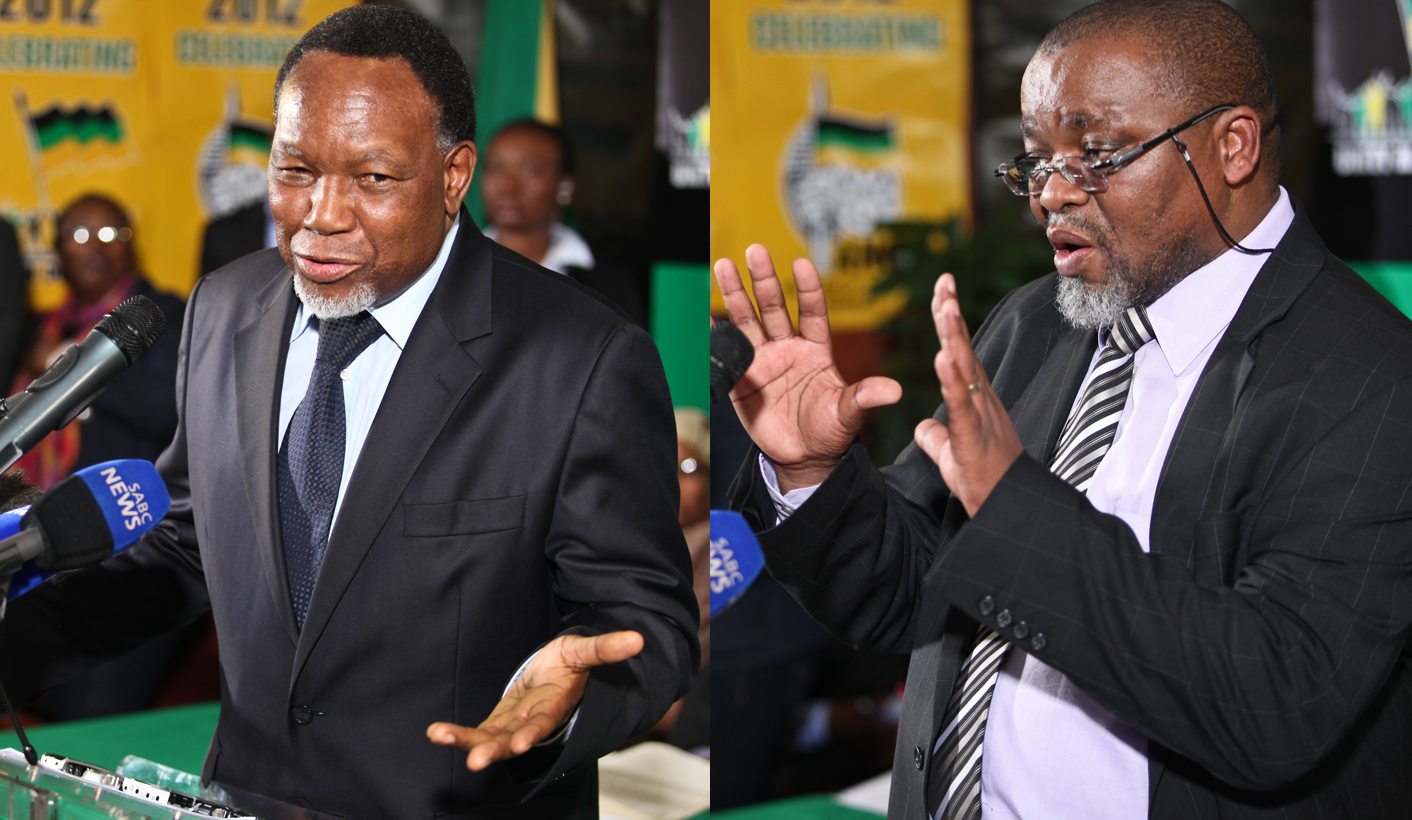 In a 1,022-word retort to former president Kgalema Motlanthe’s scathing assessment of the ANC and the alliance, ANC secretary general Gwede Mantashe does not dispute a single point of substance. Mantashe’s missive contests the appropriateness of Motlanthe speaking publicly on the issues and carps at the former leader’s perceived agenda for doing so. For an organisation that claims to celebrate its grand history and legion of heroes, it certainly does not take kindly to any frank talk by former leaders. Veterans, it would seem, are only embraced when they clap and sing along, and eschew independent, critical thought. By RANJENI MUNUSAMY.

Gwede Mantashe has a penchant for telling complicated stories to make a political point. Usually it is about his hometown Cala in the Eastern Cape or his time as a mineworker. In an article in Business Day, he employed an obscure Chinese proverb “when a person leaves, the tea gets cold” to make a point about former leaders trying to stay relevant by criticising those still in office.

“As a result of the luxury imposed by not having the responsibility of elected leadership, they want to warm their tea by seeking celebrity through criticism of those in office and the policies they themselves once espoused,” Mantashe wrote.

The article was in response to statements by former president Kgalema Motlanthe in an interview with Business Day, including criticism of the ability and consciousness of ANC leaders and members, as well as non-compliance with the ANC constitution. Motlanthe also said the that tripartite alliance existed in name only as Cosatu and the South African Communist Party had essentially collapsed into the ANC.

Mantashe’s response to this was somewhat different to the official line from the ANC, which was that Motlanthe was a “voice of reason” and “critical opinion maker”. “The ANC embraces his forthrightness and willingness to provide leadership beyond formal structures of the organisation,” the party spokesperson Zizi Kodwa said in a statement.

From his side, Mantashe did not once mention Motlanthe by name but there is no doubt about the target of his vitriol.

“It is said that with hindsight everyone becomes a brilliant political pundit. Former leaders of parties and government report things to the media that they at no point raised with their erstwhile or even current parties. Having suddenly ‘found their voice’ after happily playing status quo politics while in power, the ‘former insider’ status of these former leaders lends them an extra appeal in the media,” Mantashe wrote.

Dragging out the tea metaphor, he continued: “Their bona fides are presented as being for ‘the sake of the country’, and not to protect their ‘tea’ – in this case, being individual or group interests, or to build a power base or fuel personal ambition.”

Keeping with the Chinese theme, Mantashe then went on to cite Mao Zedong, who, other than being the first chairman of the Communist Party of China, is credited with mass human rights abuses and the deaths of up to 70 million people through starvation, forced labour and executions. Mantashe chose to lean on Mao’s ideas on how to deal with social contradictions. According to one of the most authoritarian figures in world history, settling “controversial issues amongst the people is by the democratic method, the method of discussion, of criticism, of persuasion and education”. It is certainly not by “grandstanding and coercion”, Mantashe said.

Mantashe is known to lash out critics of the ANC, and seems to take particular offence when former leaders speak out. Those who have been in his line of fire previously include former Cabinet ministers Trevor Manuel, Jay Naidoo, Ronnie Kasrils and former ANC Veteran’s League president Sandi Sejake. He has challenged former president Thabo Mbeki for saying the country was in a “dangerous and unacceptable situation of directionless and unguided national drift”. Mantashe recently accused former ANC national executive committee member and director-general in the presidency Frank Chikane for leaking his own document to the media on his assessment of the parlous state of the ruling party.

So perhaps the barbed response to Motlanthe was predictable. The fact that Motlanthe chose to speak publicly on these issues rather than raise his concerns first with the ANC opened him up to attack. But since he does not serve on any leadership structure, Motlanthe is not obliged to raise the matter internally. He has been out of the ANC leadership since December 2012 and it is perhaps time he looked for ways to “warm his tea”.

It is somewhat disingenuous for Mantashe to say Motlanthe “suddenly found his voice”. In his organisational report to the ANC’s 2007 national conference in Polokwane, Motlanthe, then outgoing secretary general red-flagged many of the issues Mantashe highlighted in his report at last month’s national general council (NGC). Motlanthe warned then of “gate-keeping, ghost members, commercialisation of membership, rent-a-member and other forms of fraudulent and manipulative practices that seek to influence the outcome of elective process remain much too widespread”. He also spoke out against “careerists” and the “demon of factionalism”.

Yet Mantashe intimates that Motlanthe’s agenda was to prove that his leadership was better than the current one. “What must be read from their [former leaders’] statements is that current challenges would never have happened when they or their political patrons were in power. Theirs was a golden age, and ours is ‘delusional’,” Mantashe wrote.

Mantashe must also have forgotten that the first thing Motlanthe did after he lost the ANC presidency to President Jacob Zuma and declined all other leadership positions at the party’s Mangaung conference was to make himself available to run a political school for the ANC. This was precisely to deal with the collapse of political consciousness and ANC traditions amongst the membership and leadership that he has raised now. It was the ANC leadership that decided not to follow through on setting up proper structures for political education, which the NGC reaffirmed last month was sorely needed.

Motlanthe’s criticism no doubt stung. Cosatu also felt the pain, and reacted immediately saying the comments were regrettable that Motlanthe “ignored all the facts and opted for an easy option, by sounding the death knell for the alliance”. After a meeting with Motlanthe however, the Cosatu leadership appeared to backpedal, saying the federation was open to engagement and advice and valued Motlanthe’s views. Strangely, Cosatu ended its statement as follows: “The matter is officially closed and the federation will not comment any further on it.”

The SACP’s general secretary Blade Nzimande has been uncharacteristically silent on the matter. His deputy Solly Mapaila told Business Day: “I don’t think he (Motlanthe) is right on this one”.

The varied reactions shows that Motlanthe chose his “tea warming” moment well. The interview was ostensibly to elucidate on the launch of his foundation, which he wants to use to improve dialogue between different sectors in society. He could have chosen to be less forthright about his assessment of the state of the ANC and the alliance but there was no reason to be.

By its own admission at the NGC, the ANC is in a state of decline with dropping membership, electoral support and a compromised public image. That was the assessment of the ANC president, its secretary general and the delegates of the NGC. Motlanthe was not able to attend but he would no doubt have read the ANC documents and media reports.

The state of dysfunction of the alliance has also been acknowledged by all three organisations. While they might not have said the alliance is dead, the ANC, SACP and Cosatu have conceded that alliance resolutions are not acted on and processes are not followed through. Motlanthe’s criticism of Cosatu, particularly the handling of the expulsion of metalworkers union Numsa and its former general secretary Zwelinzima Vavi, was quite similar to what the ANC task team assisting the federation had said.

So it is not so much that Motlanthe was wrong, but rather that he, as a former leader, chose to speak publicly that caused offence. This too is somewhat hypocritical. The ANC is currently leaning on its veterans in the integrity commission to help rescue the party’s image by telling those who face serious charges and accusations to get out. So while the political weight and reputations of the veterans are useful to dispense with compromised members, they are not required to have critical and independent thought.

Motlanthe was part of the ANC leadership when the contamination and decline began in the late 90s. So he cannot wash his hands of the mess that exists now. But he remains an important and authoritative voice in the ANC, as its former deputy president, and in society as a former state president. He also has every right to speak on any issue he wants to, as a citizen and ANC member, and will probably be warming his tea more often once his foundation takes off.

Mantashe is in fact the one who should be cautious about what he says. He has ambitions to ascend in the ANC hierarchy and he has also made some powerful enemies. Trying to muzzle the elders could backfire as there will be nobody willing to speak when voices of reason are needed. And someday in the not too distant future, Mantashe could find himself in the political wilderness. He might find cold tea quite difficult to swallow. DM

Photos of Kgalema Motlanthe and Gwede Mantashe by Jordi Matas.