Gaza: Defiant in the face of death 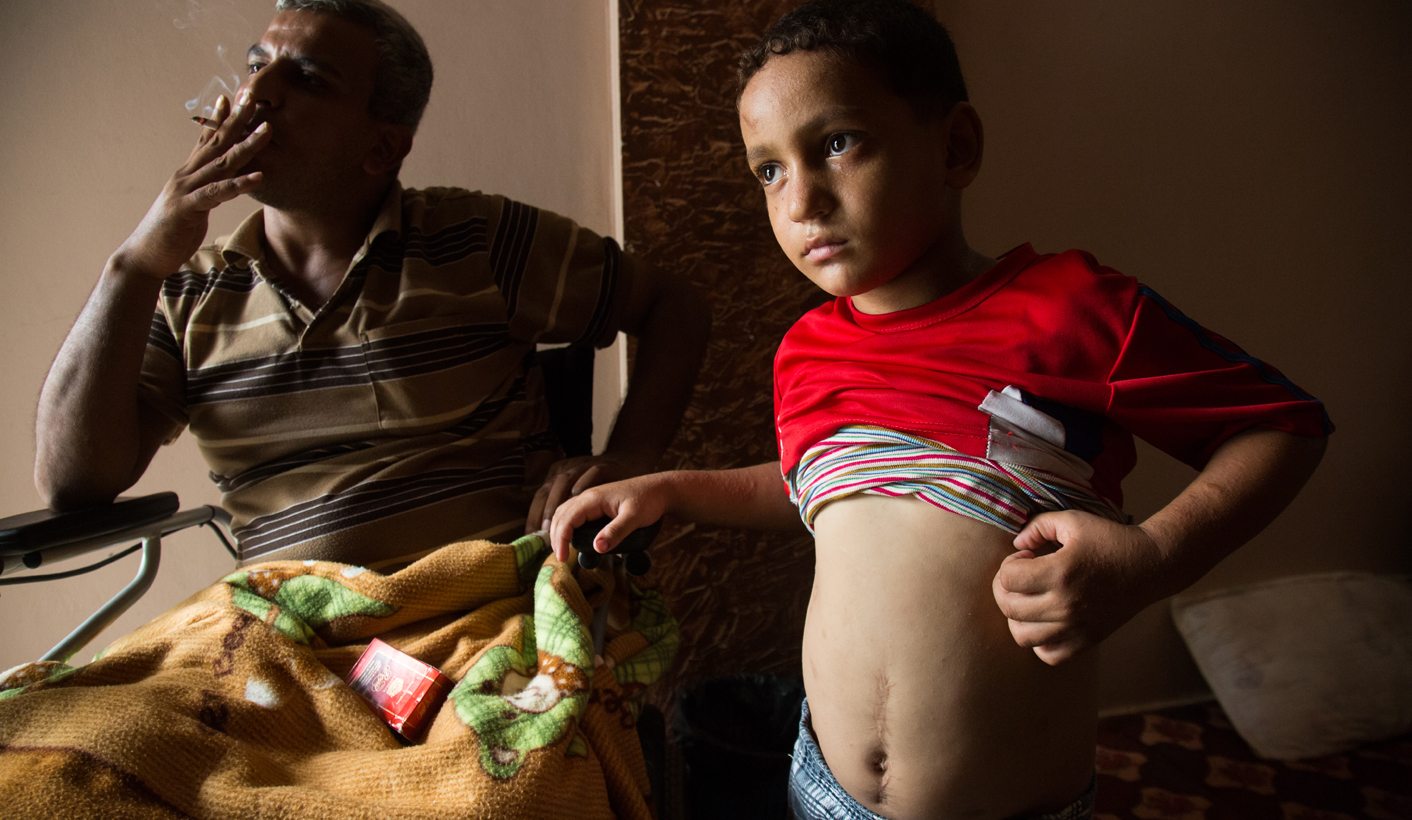 As a result of his injuries, Ali Wahdan is unable to find work as a mathematics teacher, and is confined to his wheelchair. The statistics that tally the dead in the most recent Gaza war are routinely disseminated in the media, and in factsheets about the conflict. It’s only when you see a shelled house, where destroyed rooms were once filled with people, and are now empty, that the human cost of the war sinks in. By SHAUN SWINGLER.

Ali Wahdan was mourning his dead parents when the bomb fell on his house in Gaza. They had been killed just days before, in a blast that claimed the lives of another six of his family members. Ali didn’t know then that the latest blast would obliterate nearly all that remained of his family, and maim his body. In his own way, he is an unwitting symbol of the human cost of the Gaza war. Both his legs have been amputated. He is defiant, however, in his hopefulness.

He greets me and my fixer with a warm smile, as he invites us into his rented house in Beit Hanoun, in northern Gaza. Beit Hanoun was one of the hardest hit areas of Gaza during last year’s 50-day conflict. The 36-year-old offers us Turkish coffee, and lights a cigarette. His sons Mosaab and Omar flank him as he talks to us, occasionally finding something more interesting to do in another room.

Ali stays in the house with his surviving sons, just a block away from the blast that took his wife, brother, and two of his children from him. The bomb destroyed his right leg, and maimed his left, which was later amputated.

“The last thing I remember is making a phone call for help to tell authorities that me and my family were under rubble and needed help,” Ali tells my translator. “After I finished the phone call, I woke up in Egypt – 22 days later.”

“When I woke up in the hospital in Egypt I asked my brother where my wife and kids were. He told me we were not in Gaza, we were actually in Egypt, but I would be able to speak to my wife soon.”

After two months in hospital, drifting in and out of consciousness, Ali was finally able to speak to his son Mosaab on the phone.

“I started wondering how I could speak with my son, but I couldn’t speak with my wife, because she was supposed to be with him. So I asked my brother, and he told me that she is busy with some stuff, that she is out in the market.”

Understandably fearful that the weight of the loss would destroy his already fragile health, medical staff and family kept the truth from him.

“But one day I’m calling Mosaab, and when I ask him where his mom is, he says to me ‘baba my mum is killed’.”

“I think they were scared to tell me,” he says. “So that’s why they let my son tell me the truth.”

Ali sits off to the side of the living room in his motorised wheelchair while he retells his story, occasionally taking a long drag from his cigarette.

“After four months I left the hospital and returned to Gaza,” he says. “The whole time I thought that it was only our home that was destroyed in Beit Hanoun, but I was completely shocked to find the whole area destroyed. It was miserable.”

As a result of his injuries, Ali is unable to find work as a mathematics teacher, and is confined to his wheelchair. The statistics that tally the dead in the most recent Gaza war are routinely disseminated in the media, and in factsheets about the conflict. It’s only when you see a shelled house, where destroyed rooms were once filled with people, and are now empty, that the human cost of the war sinks in.

According to the UN, nearly 100,000 homes were damaged or destroyed in Gaza as a result of the conflict. This destruction led to tens of thousands of displaced Palestinians in Gaza. Rebuilding efforts are underway, but they are moving slowly due to a lack of funds, and restricted access to building materials. Many Palestinians whose homes were bombed have been moved to temporary shelters while they wait for them to be rebuilt. Others are staying in the shells of their former homes while they rebuild the houses themselves. Some, like Ali, rent houses to live in.

The recent escalation of violence between Israelis and Palestinians has led many to speculate that a third Intifada, or uprising, is inevitable. The second Intifada took place between 2000 and 2007, and led to the death of 5,848 people, according to UN figures. Khalid Mish’al, head of the political bureau of Hamas, was quoted in an interview by Independent Media as saying:

“[T]here are clear signs that we are on the verge of a real uprising. There is an expression of outrage against Israeli policies and actions against the Palestinian people and holy sites. Everything that happens on the ground brings an intifada closer.”

Ali lifts the blanket decorated with cartoon flowers on his lap, exposing his legs, both amputated at the knees, his right leg still in bandages. “I lost this leg,” he says, grabbing his scarred left thigh, “And they try to treat the other one, but there was a lot of damage.”

After his injury, Ali’s right leg was healing slowly, at an angle, causing him lots of pain, so he opted to have it removed. “It was dangerous to cut my leg off in Gaza,” he says, “but I was suffering. I wasn’t sleeping. So I had it removed. I’m recovering well. There’s still a bit of pain, but it’s a lot better.”

When I ask him what he hopes for the future of his family he says, “I wish for my children to see me strong and hopeful. Not for me but for them – to give them a better future. I wish for them to experience peace in Gaza, but I don’t think that is possible right now.”

I try, and fail, to say something comforting to Ali. My fixer does his best to translate my rambling attempt at a platitude. I know, in that moment, with absolute certainty, that there isn’t anything I can say. Some pain, some loss, some senseless grief lies beyond the realm of words. DM