Xenophobia in Grahamstown: ‘We are not leaving!’ 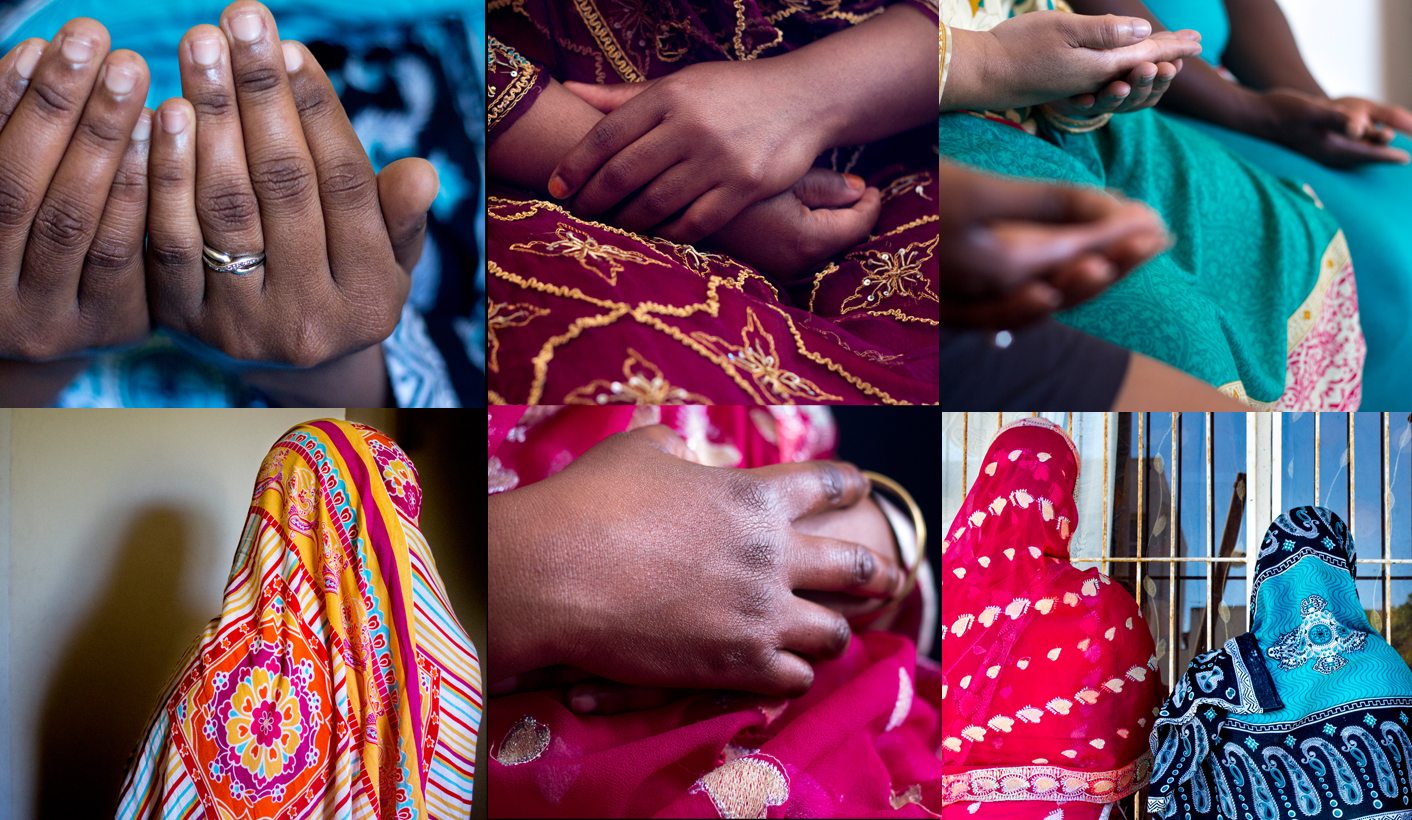 The xenophobic attacks that began in Grahamstown last week have displaced more than 500 people. Many lost everything in the looting and are without food, money or clothing. Families are split, with men having been evacuated due to fears for their safety. And the response from the municipality and the police has only added to their pain. But Grahamstown is their home and leaving is not an option. By KATE JANSE VAN RENSBURG, FEZOKUHLE MTHONTI and MIKAELA ERSKOG.

At Masifunde, a local nongovernmental organisation in Bathurst Street, Grahamstown, six women are sitting on and around the staircase. Two women talk urgently on the phone as they relay information to various stakeholders. This concerns the bedlam that has descended upon the city since Wednesday 21 October. One week has passed since a xenophobic outbreak, fuelled by the rumour mill, began in the City of Saints.

Rumours had been circulating that a bearded Muslim man was responsible for recent murders in and around Grahamstown over the past year. The unfounded rumours were exacerbated during a Taxi Drivers Association (TDA) protest on that Wednesday. Mariam Iqbal, a local resident whose family was threatened, said she received a phone call to tell her that members of the TDA were protesting for better road infrastructure and the frustration had turned to the issue of unresolved murders. She was warned to close her shop as foreign nationals were being linked to the murders. A looting spree then swept the town.

A Grahamstown local whose husband is a Pakistani national who has been in South Africa for a little over 10 years, is one of many women affected by the recent xenophobic attacks. Over 300 shops have been looted and more than 500 people displaced. “My brother-in-law called my husband and told him that they had started throwing stones outside the shop. He tried to lock the looters out of one of the shops but was too afraid as the looters were approaching,” she said

A young woman, visibly on edge, explained: “We lost everything [in the looting]. My kids don’t have clothes or food … I am afraid – I have heard people talking about attacking my friend. My body keeps shaking, I have no appetite. I am not happy at all.” She worries about her young children. She is not able to produce milk due to the stress. All the infant food supplies and clothes were taken last week. After the family business was emptied out, she has no means of income to support them.

“We nearly lost my husband’s papers [identity documentation],” she added, worried about the legitimacy of their residency in South Africa. She has not been able to see her husband, as male foreign nationals were advised to stay in a separate safe house. Initially Islamic male members of the community were targeted, resulting in evacuations to a location outside the town.

Soon after, Hi-tech guards and some members of the community stood guard outside the shops. Ayanda Kota, a member of the Unemployed People’s Movement (UPM) was among the people who helped protect people’s property. “It is only the UPM and the local EFF [Economic Freedom Fighters] branch that are helping us,” says one woman. “The government must help us. They must step in.”

Interventions by South African community members have been vital because they too are feeling the effects. Muriel Williams, who lives in Extension 9, described how people in the affected areas are suffering: “There is no bread. The shops are all closed since Wednesday. There is no money for the [R16] trip to town to get bread. It is a struggle.”

While the current living situation is dire, what has been equally troubling for many of the victims of the looting and xenophobic threats are the responses of various police officers. Williams explained: “On Wednesday, two ladies passed my house with bags full of [looted groceries and household] things. Someone asked them what they were doing and they told us that the police said that they can take it. How do police look after us if it is them who are helping to take from foreigners?”

Distrust of the police is amplifying by the lack of communication on definitive actions to end the violence. Failed communication seems to have been a consistent problem with the police and municipality. Rabiah Hoosin, a target of the xenophobic assaults, said: “The councillors knew a week before about the dangerous rumours. They should have acted earlier … The police also knew. They should have gone to the location and addressed the people. I hear the councillors had meetings about it. They were supposed to tell people. We have lost everything based on rumours.”

Many women have been targeted for their manner of dress, especially their headscarves. “People are judging us by what we wear and swear at us,” explained Hoosin. Another woman, Rehana Naveed, said: “They don’t accept the way we dress. We are not going to change for them. We are human beings, the same as them. They must accept it.” One of the women, however, decided against wearing her headscarf and all other identifiably Islamic clothing. “I wanted to see their faces, [and] know what they looked like,” she said.

Grahamstown local Ali is growing increasingly anxious. Her husband and son have been in Pakistan and have had to delay their flight back twice. She fears that continuing xenophobic tensions will prevent her son finishing his academic year in Grahamstown. “People really don’t understand the impact that they are having on the development of young children. My child might have to do an extra year of school as a result of this,” she explained. Ali is also worried about the safety of her son and husband in Pakistan as there have been reports of an earthquake.

Holding her daughter tightly, Jacqueline Khokam, the wife of a Bangladeshi shop owner, reflected on the total chaos of the past week. “My energy is gone. My energy is all used up. We just want everything to go back to normal,” she said as tears began to run down her face. “Where is the ubuntu? Where is the unity? What has become of Grahamstown? How can you do this to other human beings? I am so disappointed in the community. Some of the people looting were people we see every day. How must we feel? How would you feel?”

“We are brothers and sisters, not animals like they treat us. We don’t have anything, not even a spoon,” said Naveed. “They took our children’s clothing. Our children are crying. These people want to kill them too. If they see a foreigner child, they want to kill them.”

But Grahamstown is home to those who have been displaced and leaving is not an option. “I’m not going back to the past. I’m talking about the present. We forgive you. Please just give us peace, harmony, respect and love so that we can be united as one again,” Naveed pleaded. DM

Displaced victims of the xenophobic attacks and those who stand in solidarity with them will be marching to Grahamstown City Hall at 1pm on Friday 30 October, in protest at the lack of support from the mayor, councillors, municipality and the police.

Mikaela Erskog is a history Masters student at the university currently known as Rhodes and is a fellow at the Unit for Humanities at Rhodes (UHURU).

Fezokuhle Mthonti is a politics Masters student at the university currently known as Rhodes, and is a fellow at the UHURU.

Kate Janse van Rensburg is a Bachelor of Journalism degree graduate and is a politics Honours student at the university currently known as Rhodes.