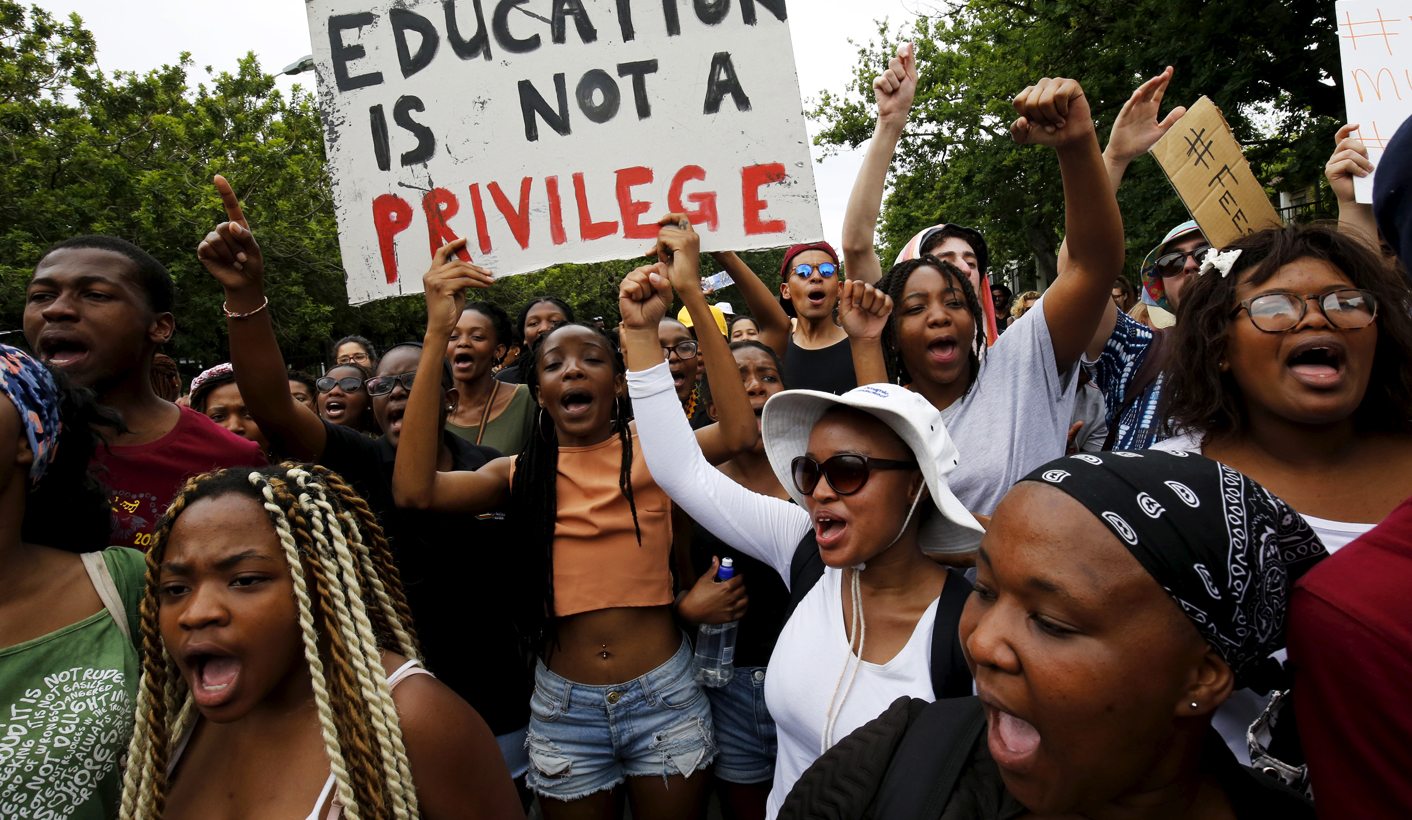 No country can hope to transition into a flourishing state without addressing its past legacies. At the same time, no country can succeed by solely focusing on its local agenda without due consideration for survival in this global age. Societies such as ours have to relentlessly pursue dialogue on complex issues, such as the demand for free higher education. By AYANDA NYOKA.

Higher education institutions in South Africa find themselves between a rock and a hard place. They have to be competitive and respond to a skills-intensive global economy. At the same time they have to address contestations around race and gender representation in their student body and academic staff. The emergent student movements demand that they decolonise and reflect an African identity as institutions operating on African soil.

Pursuing the aims of redressing historical injustices and economic development in post-conflict countries often do not sit comfortably with each other. Yet their interdependence requires society to find ways to navigate these inherent tensions. No country can hope to transition into a flourishing state without addressing its past legacies. At the same time, no country can succeed by solely focusing on its local agenda without due consideration for survival in this global age. To navigate these complexities, societies such as ours have to relentlessly pursue dialogue; it should be the hallmark of decision making, characterised by a maturity to negotiate trade-offs at different points of our transition. Failing which, the price society pays is huge – it is the fracture of social relations and the destabilisation of institutions.

Processes of social transformation typically originate from the political sphere and have to be translated into government programmes and are often imposed on unwilling participants. It is for this reason that in the past week we saw students redirect their fury to Luthuli House and to the national government. Free education as a right in the South African context has its genesis in the Freedom Charter. The early leaders of the movement envisaged that the state would provide allowances and scholarships for deserving students to allow them to access higher education and technical training. However, the crafters of the charter were ambivalent about free higher education, instead promising free basic education for all. In the euphoria around exposing the misdemeanours of the African National Congress (ANC) government, we should resist the narrative which ignores the progress achieved on this front.

This is not to absolve the government of its responsibility for propagating promises on which it cannot deliver. The 2007 Polokwane conference that replaced then president Thabo Mbeki ushered in the dominance of left-leaning perspectives. In a bid to oust the proponents of Mbeki’s neoliberal agenda, it resolved to entrench the Freedom Charter into the thinking of the ANC going forward. This entailed the introduction of free education for the poor until undergraduate level. However, this was but a fleeting wave of populism, at least in relation to free higher education. A close look at the ANC’s thinking reflected in its 2014 election manifesto and this year’s January 8 statement shows the promise of free higher education has long been abandoned. The left-leaning agenda of the Polokwane delegates has been made subservient to a reformist agenda in which efficiency is the primary objective. This reflects a misalignment between political expectations and policy realism.

Instead of rolling out free education, the government opted for the further expansion of the National Student Financial Aid Scheme (NSFAS) as the core instrument for funding poor students. Although fraught with a litany of administrative inefficiencies, the scheme has contributed towards making higher education more affordable to the poor. However, the extent of poverty and inequality in South Africa is very high and the demand has simply grown. Furthermore, it had to have been anticipated that with increasing universal primary education, the state would have to respond to future demand and aspirations. Young people without a higher education qualification or a minimum Matric are worst off in the job market. Thus for the majority of black youth, who are usually first-generation university students, the aspirations for upward mobility and to escape the trappings of intergenerational poverty are greater.

Rather than pushing the government to increase funding to higher education, the ANC has sought to position universities as the arch-enemy of their programme of broadening access to higher education via escalating tuition costs. Analysts in recent weeks have exposed the disingenuity behind such assertions. In reality decreased state funding for higher education has put universities under financial pressure. Unfortunately, the entrepreneurial stance of universities in response to limited government funding serves to further entrench the racial gap in education, employment and income. Research by Stellenbosch’s Professor Wim de Villiers featured in the Transformation Audit of the Institute for Reconciliation and Justice indicates that government spending on higher education has decreased both as a percentage of gross domestic product and as a proportion of the education budget. The research shows that in 1987 the sector received 15.43% of the total education budget but by 2009 its share decreased substantially to 11.51%. This goes against the logic of budget reforms in the post-apartheid state which necessitated the expansion of budgets in social goods to respond to increased demand from the historically excluded black majority.

Whether or not the student movement dissipates in the run-up to the exams, the demand for free education will rear its head again sooner or later. Policy makers have to make hard choices and would be better advised not to be swayed by short-term objectives. This is a matter that requires societal dialogue. One that should consider not only the needs of the current generation but should take into account the preservation of limited resources for future generations. Intergenerational equity is crucial to any dialogue about the dispersal of current resources. Judging by the evasion of NSFAS loan repayments by those who benefitted from the scheme, we, as a society, are a long way from thinking along these lines. Furthermore, in this seemingly apolitical, non-racial, classless struggle for free education we should not lose sight of the fact that disparities persist in higher education participation rates across racial lines. The emergence of class and its intersection with race has to be carefully thought out when making decisions about who should benefit from free education. DM

Ayanda Nyoka is the project leader for the Inclusive Economies project at the Institute for Justice and Reconciliation.

Bernard Chiguvare for GroundUp
Save 2 mins

Real transformation: Let’s uphold the spirit of ubuntu, not the nothingness of abandonment