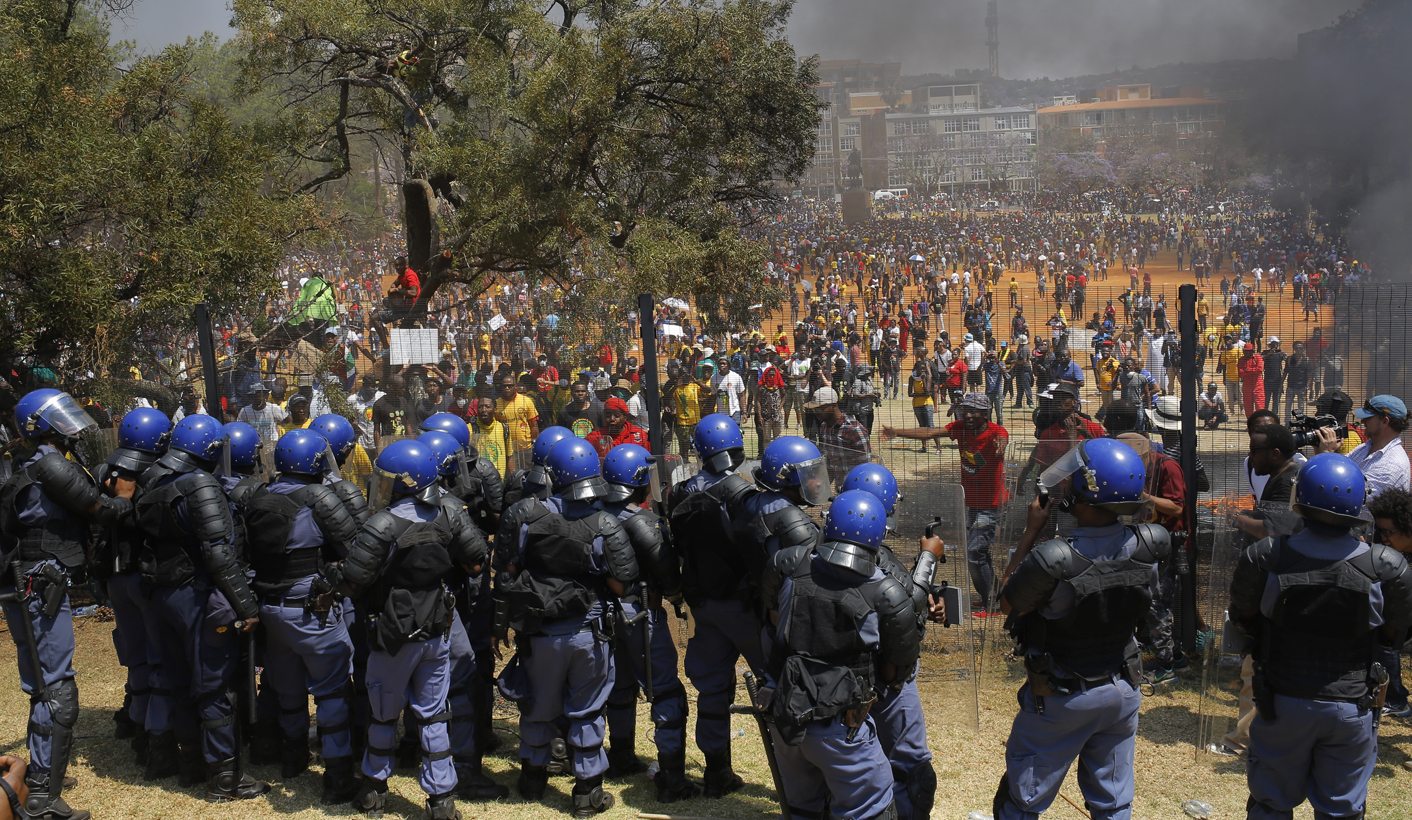 What died in Pretoria on 23 October 2015? The quick answer to this question, a weekend after the lifting of the barricades, is also the most undemanding answer: the African National Congress of Jacob Zuma and Blade Nzimande died. Thing is, you can’t stay long in this thought without bumping into André Malraux, the writer and politician who was the culture minister of France during the student riots of May 1968. KEVIN BLOOM considers what he saw at the Union Buildings on Friday, and wonders, as per Malraux, whether it was really God that died.

At 13.50 on 23 October 2015, when the stun grenades were exploding at the rate of two per minute and the teargas was billowing down the hill in clouds of iridescent green, a window opened onto a higher dimension. The young people slowed down, their speech became softer. Between the trees, a man in his early twenties could be seen bending, retrieving a stone, throwing it at the fence – his friends patted him on the back and said, “No, we don’t do that here.” Again, a group of students from up front turned and ran towards us, sparking fears of a stampede; again, the students beside me stood their ground and called for calm. As if snapped out of hypnosis, the runners stopped in their tracks.

And then the banter resumed. “I’m sure Zuma and his friends are sitting up there laughing at us,” said a woman who looked too young to remember even when Mandela was president. “They’re thinking, who are we to bring them down?”

Her friend’s response was unexpected, a reference not to the order-givers up in government headquarters but to the small group of students, about 50 metres from us, whose tactics were weirdly at odds with the main bunch. “Can’t they just stop with the stone-throwing already? If it carries on like this, we’re not going to do what we came here to do.”

Another stun grenade volley, after which an older student, a 25-year-old University of Pretoria graduate named Tsidiso, mentioned the Arab Spring. “Remember?” he said. “Hosni Mubarak thought those students were playing around.”

The students at Tahrir Square weren’t playing around, of course, which was Tsidiso’s point – but his comparison failed in that the demonstrators at Tahrir Square weren’t just students. A better comparison, perhaps, might’ve been the most famous student uprising in post-World War II history, an uprising that likewise included all of its country’s most influential student unions, likewise spanned the political spectrum from the radical left to the moderate centre, and likewise found its apotheosis in running battles with police.

Yup, we are talking about the same student uprising that once sent the indomitable Charles de Gaulle into exile. But before you object that Europe isn’t Africa – or more obvious, that Paris isn’t Pretoria – cogitate for a moment on these words, from the preface to Daniel Singer’s Prelude to Revolution: France in May 1968 (first published in 1970, and still considered the go-to textbook on the subject):

“The lessons of the May crisis are not only true for France, but extend well beyond French frontiers. Take the explosions of protest erupting periodically from Tokyo to San Francisco. If protest movements express only student unrest, society can cope with them. True, education now plays a bigger role in the process of production than in the past, and even a partial disruption of the universities would have serious consequences. Yet a society should be able to live with a revolt limited to the years of apprenticeship. Matters become quite different if the students express discontent with their future jobs, if they foreshadow the revolt of teachers, technicians, scientists, members of what, for lack of a better appellation, must be called the new professional intelligentsia.”

To head off another objection at the pass: notwithstanding demonstrations of solidarity by political parties and lone-wolf intellectuals who claim to speak for South Africa’s workers and unemployed, the October protests in this country have been a spontaneous attempt by the educated, under the #FeesMustFall hashtag, to widen access for all to the middle class – therefore, they are inherently about the shortcomings of the “new professional intelligentsia”.

If the comparison to France ‘68 holds true, or at least holds true enough to continue with the drawing of parallels, then Friday 23 October was South Africa’s 10 May. The latter was the day in 1968 when around 20,000 students congregated on the Left Bank of the Seine for a showdown with the French government. The Republican riot police repeatedly pushed these students back, because to allow them to cross to the Right Bank would be to allow them to get close to the Élysée Palace (France’s equivalent of the Union Buildings). The battles involved burnt and overturned cars, barricades in the streets, live radio broadcasts that captured the attention of the nation, and the arrest and injury of dozens of students. As in South Africa in October 2015, there were also allegations that the most serious acts of student violence were committed by agents provocateurs.

It’s one of the oldest tricks in confrontational politics, and its rationale goes thus: when the demands of the protesters are so cogent and commonsensical as to win the sympathies of the nation, the government always has the option of undermining the protesters’ legitimacy. It does this by planting people amongst the protesters who provoke the police with unlawful acts of aggression, which then allows the government to say (or imply) something like the following:

“See, these aren’t the sweet darlings you thought they were. Better you let us squash them so we can all return to our lives.”

On Friday 23 October 2015, the signs that the above was the case were many, and they began to appear at mid-morning in Burgers Park, where the march to the Union Buildings started. When I asked a young man named Joel why he was wearing an African National Congress t-shirt – why, to be clear, he was “marching against his own party” – he told me that yes, he was a card-carrying member of the ANC, but that today he was less than proud of his organisation.

“I’m a part-time student at Unisa,” Joel said, “I have two siblings, they are both at universities. I pay for both sisters and for myself also. It’s not an easy thing. We were promised that education would be for free. I have another brother sitting at home, with no money to go to university. If there is no money for university, where is it going?”

By “it” Joel clearly meant government money, which made the whole scene even more difficult to fathom. Why didn’t he just remove his ANC T-shirt? “Maybe I should,” he admitted. Maybe they all should have, because five hours later, when portable toilets were being burned and pushed into the crowd, it was youths wearing ANC and South African Students Congress (SASCO) T-shirts who were doing the dirty, while the #FeesMustFall group was chanting “No violence, no violence”.

At which point things started to make at least a modicum of sense. The students standing their ground and effecting a preternatural calm in the midst of the fire had been the students demanding a right to accessible and/or free education for all; the “students” (quote marks intentional) starting the fire by throwing stones and later burning the shitters were somehow affiliated to the ruling party (on its website, SASCO defines its post-1994 relationship with the ANC-led government as “complimentary [sic] and contradictory”).

By a few minutes past 3pm, after the government had agreed to a 0% fee increase for 2016, there were pockets of celebration on the Union Buildings lawns, but the sense was that everybody would’ve been a lot happier had President Zuma or one of his inner circle come out to make the announcement in person. As it was, the concession was made in a closed and cushy room to members of the international press, which was kind of interpreted as a presidential flipping of the bird to the nation’s young. And then the teargas canisters flew in a wide arc towards the statue of Louis Botha on his horse, which was a clear enough message: you got what you came for, now get the fuck off our grass.

What happened later was more confusion: barricades, clashes with cops, overturned cars, and Tshwane University of Technology SASCO members preventing buses filled with University of Witwatersrand protesters from returning to Johannesburg. Regarding the coverage of this late afternoon violence, a phalanx of 702 radio journalists stayed to do their duty – and they did it bravely and well – but a milestone historical event seemed to have been lost in the mayhem.

And so to rewind slightly, to 11.45am on 23 October 2015, when the march from Burgers Park passed by the western gate of the Union Buildings, where elite members of the South African Police Service were standing at ease in two flat rows. To the amusement of the marchers, a man in an Economic Freedom Fighters beret was marshalling us on with the words, “Move along! We don’t want another Marikana! Move along!” Nobody was laughing when we got to the bottom of the hill, however, where a spray-painted bed-sheet was hanging off an apartment block, this particular message bearing no political affiliations.

What died in Pretoria on 23 October 2015? The natural answer to this question, a weekend after the lifting of the barricades and the dissolution of the teargas, is also the most undemanding answer: the one suggested on that bed-sheet. Thing is, you can’t stay long in this thought without bumping into André Malraux, the writer and politician who was the culture minister of France in May 1968. We don’t know conclusively yet whether 23 October 2015 was the South African version of France’s 10 May 1968, but we do know that it may well turn out to be. In that sense, Malraux’s assessment is instructive – while some said capitalism had died and others lamented the passing of communism, Malraux invoked the death of God.

A fundamental examination of a nation’s conscience tends not to happen more than once in a generation. It is an unforgettable event that shakes the soul of every last citizen, up to and including citizen number one. On 10 May 1968 in Paris, as on 23 October 2015 in Pretoria, a nation was forced to ask itself what it believed – and in both cases, the answer appeared to be something like, “We can’t really say, but we can’t stomach what the grey-hairs are telling us to believe.”

In the weeks ahead, as South Africa’s political parties swoop in like vultures to feast on the carcass, we are guaranteed to witness a mass resurrection of all of the above. Privilege, racism, and the ideologies of the last apartheid generation are about to come back so strong that we’re all going to choke on our inheritance. After all, although half a million Frenchmen marched against him on 30 May 1968, Charles de Gaulle had the backing of the military – he returned from exile to a resounding election win in June of that year.