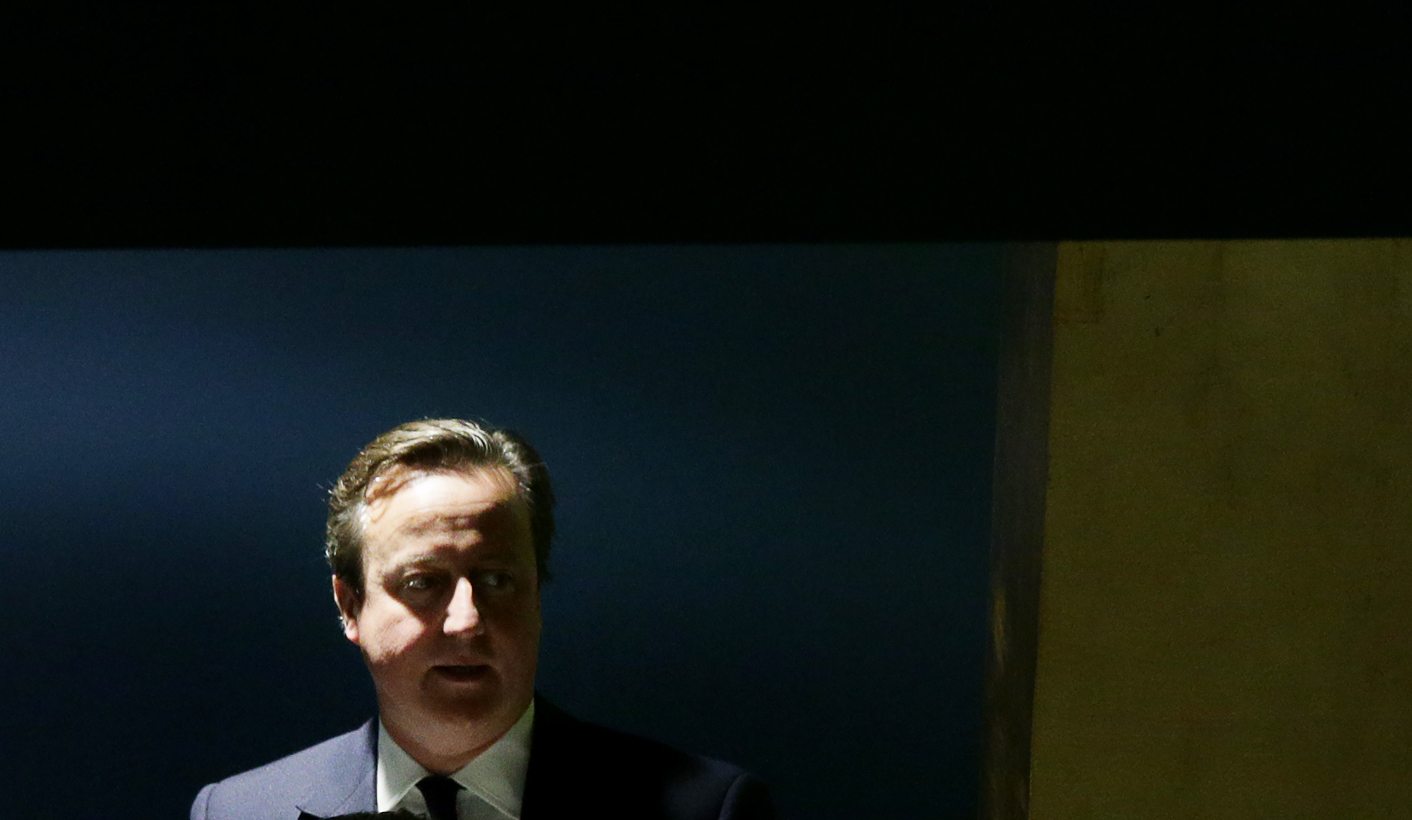 Britain has a grand plan to fix the refugee crisis, alleviate poverty and stabilise east Africa – and, sure enough, it involves more wars in more foreign lands. Prime Minister David Cameron is sending troops to 'advise' in Somalia and South Sudan, believing this will make all the difference. However, even at face value, his logic is flawed. By SIMON ALLISON.

When deployed, these will be the only British peacekeepers operating in active conflict zones (there are others in Cyprus, while Britain’s involvement in Afghanistan and Iraq is not under an international mandate), and will be the first deployment of British boots on the ground in Africa since the military intervention in Sierra Leone in 2000.

Britain intends to send 70 troops to help the African Union Mission in Somalia (Amisom) and up to 300 to support the United Nations Mission in South Sudan (UNMISS). All will serve in an advisory role, providing combat training and engineering support – in other words, none will serve on the frontlines (officially at least – there is a long and ignominious history of superpowers sending ‘advisers’ into combat situations).

“What happens in the outcome in Somalia, if it’s a good outcome, that’s good for Britain – it means less migration, less piracy and ditto South Sudan. If we can, as peacekeepers, help to maintain order and peace and see stable development in that country then that’s going to be again less poverty, less migration, less issues that affect us back at home,” said Cameron.

These are ambitious goals for a few hundred troops of any nationality. They are premised, however, on a couple of large assumptions.

Assumption number one: that British troops, in relatively small numbers, can make a difference in South Sudan’s civil war or Somalia’s intractable conflict. It’s tempting to dismiss the idea that a handful of advisers could make a meaningful contribution to these situations, but this would be a mistake. Britain’s military has spent the last 14 years involved in counter-insurgency efforts in Afghanistan and Iraq; the lessons learnt there should be applicable in Somalia, where Al Shabaab has often modelled its resistance on tactics learnt from the likes of al-Qaeda, the Taliban and more recently Islamic State. In South Sudan, the parallels are less obvious, especially because – unlike Amisom in Somalia – UNMISS is not an active participant in the conflict, and is not authorised to use force except in exceptional circumstances.

Assumption number two: that fixing Somalia and South Sudan will have an impact on “issues that affect us back at home”, especially migration. For a start, this is dangerous because it crudely underlines Britain’s motives for military engagement, which have nothing to do with the wellbeing of the countries being targeted, and everything to do with national interest. And it’s disingenuous, because neither Somalia nor South Sudan are major factors in Europe’s ongoing refugee crisis. In the second quarter of 2015, just 5,365 Somalis claimed asylum in Europe, making Somalia only the tenth most popular country of departure for refugees (compared to 43,995 from Syria, 25,995 from Afghanistan and 17,665 from Albania). South Sudan did not even merit its own entry in the statistics.

Unequivocally, Somalia and South Sudan are not the source of the refugee crisis.

Britain’s decision to deploy troops on the African continent is curious for another reason. In recent years, the United Kingdom has been reluctant to get too actively involved in African conflicts. “The optics aren’t very good,” said one British diplomat in Addis Ababa, explaining that the country was sensitive to the echoes of its imperial past, that it knew that any military action would inevitably lead to accusations of neo-colonialism. On this front, nothing has changed.

Writing in the Guardian, Jamal Osman described how Somalis have not forgotten the role Britain played in creating the divisions which have crippled their country. “I believe that Somalis are deeply sceptical about Cameron’s real motives. To understand their suspicions, you have to recall Britain’s colonial record. British people may say: ‘That’s history, get over it.’ But Britain still commemorates its own ‘heroes’, remembering those who lost their lives defending the UK. Somalis too have heroes who defended their nation and they know their history … Of course, I am not suggesting Britain is to blame for all Somalia’s ills. But Britain’s historical actions there have caused immense suffering and now history is at risk of repeating itself.” wrote Osman.

Osman worries that Britain will revitalise support for Islamist militant group Al Shabaab, which will use British involvement as a potent recruiting and fundraising tool. “African Union forces in Somalia are not popular, especially those from Ethiopia and Kenya. Many Somalis see them as part of the problem and puppets of the western powers. They believe their objective is to prevent Somalia ever becoming united and powerful. Britain’s decision to work with these unpopular foreigners will, in my view, be perceived as an anti-Somali agenda.”

Ultimately, this is a dangerous gamble by Cameron. But it’s not a dangerous gamble for him. If his decision to send troops to Somalia and South Sudan backfires, it will likely be the citizens of those countries who feel the consequences. In the meantime, Cameron gets to enjoy all the benefits of playing the elder statesman, as outlined in his speech – no matter how disingenuous it may have been. DM