Is Unite Against Corruption still united? 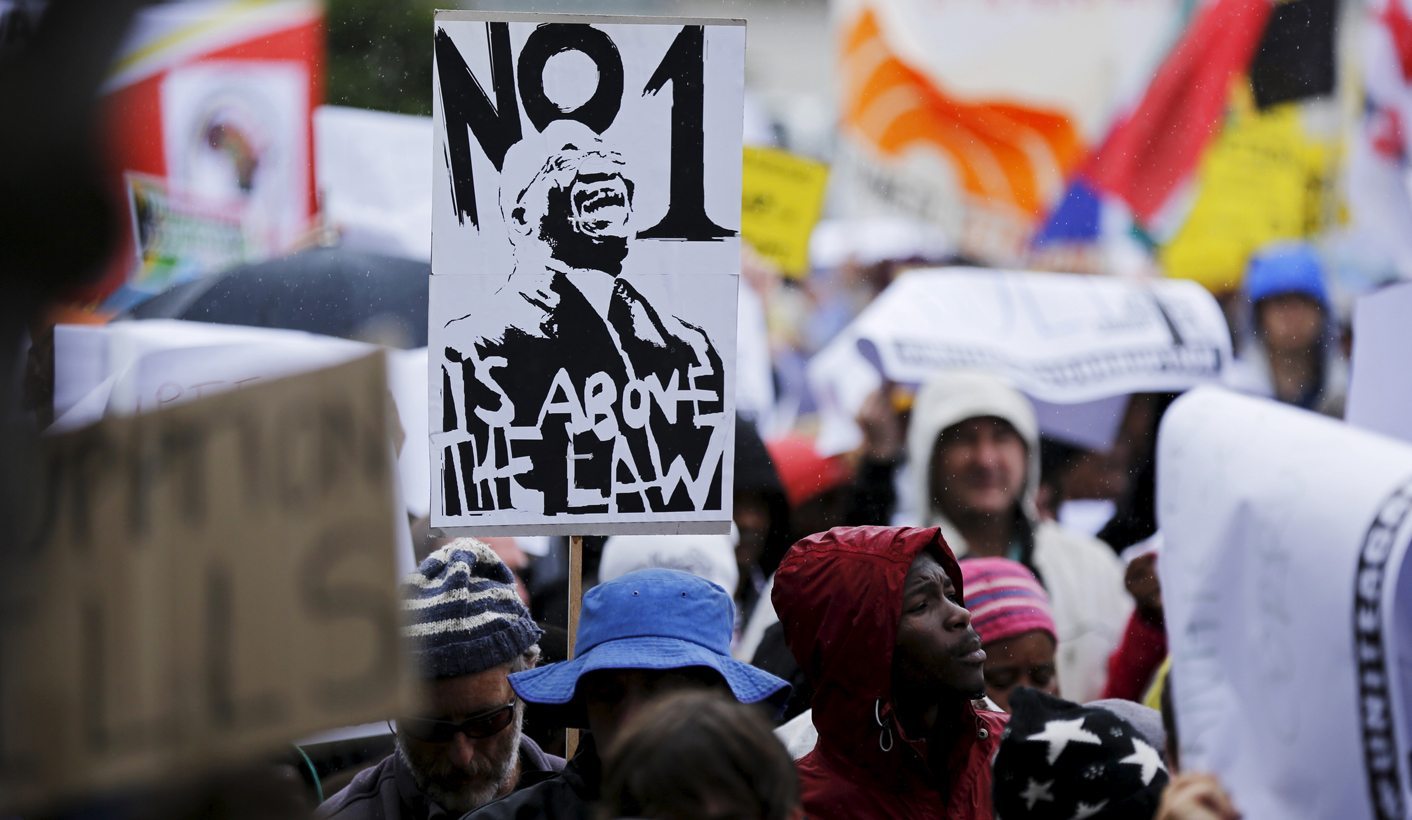 The anti-corruption marches in Pretoria and Cape Town on Wednesday have been billed as the beginning of a movement with ongoing protest action. The next event is scheduled for 14 October and as Numsa has permission for a protected strike, the marches are likely to be dominated by members of the metalworkers union. But is there a common understanding about what the purpose of Unite Against Corruption is? And where is this ultimately heading? By RANJENI MUNUSAMY.

Let’s recall how this all began. During the ANC onslaught on Public Protector Thuli Madonsela while the parliamentary ad hoc committee was considering the Nkandla report, former Cosatu general secretary Zwelinzima Vavi asked on Twitter whether people would be willing to march to the Union Buildings in support of her. The overwhelming response was positive and this galvanised him to engage unions and civil society to plan a mass march against corruption.

Civil society and religious organisations began pledging their support for the initiative but some backtracked when they thought the campaign might become too political. The leading role of Vavi and Numsa general secretary Irvin Jim made people worried that the anti-corruption campaign might dovetail with their other projects. The Unite Against Corruption (UAC) marches on Wednesday ended up having so many disclaimers about what it was not that it was difficult to define what it was.

With the marches going to the Union Buildings and Parliament there was a subliminal message that those in political power were the primary targets. But the organisers were at pains to spell out that the ANC was not the target but rather those involved in corrupt acts. While corruption in government occupies national dialogue, UAC said their focus was also on corruption in the private sector.

Religious and civil society organisations seemed comfortable with this positioning, even though Vavi and Economic Freedom Fighters (EFF) leader Julius Malema were more forthright about their target when they addressed the crowd.

Malema said the Union Buildings were “harbouring the most corrupt thief in the country” while Vavi lashed out at government for squandering money and demanded to know when ministers would be arrested for their involvement in corruption. The arrival of ANC leaders Jeff Radebe and Zizi Kodwa at the march was meant to take the sting out of the attack on the ruling party by showing their support for the anti-corruption message.

The next phase of the campaign might be even less nuanced. With Numsa now obtaining a strike certificate from the National Economic Development and Labour Council (Nedlac), their members from around the country will be mobilised to join the marches. Numsa’s leaders are less likely to pussyfoot in their messages as they are generally more militant against the ANC.

Numsa will need to pull in big numbers not just to make up for not being able to do so this week. Cosatu has called a nationwide strike next Wednesday against job losses, the electricity crisis and the lack of reliable public transport. Cosatu is billing their as the “mother of all stayaways”.

A great pissing contest is thus in the offing.

Cosatu claims to have regained the support of the unions that were siding with Numsa to have it reinstated in the federation. They will therefore be out to prove that they still hold majority sway in the labour sector.

Numsa was until recently still claiming it had the support of the “nine plus” that had previously joined its campaign for a special Cosatu congress. But since that congress in July, the grouping has been splintering. Daily Maverick understands that Numsa general secretary Irvin Jim had tried to convene a meeting of the group of unions to secure support for the UAC marches, but only two of the unions turned up.

Only one union in the grouping has come out clearly in support of UAC. The Food and Allied Workers Union issued a statement on Thursday expressing “full support” for UAC and stating it would “most certainly continue to take part in any progressive initiative to fight against corruption at all levels”.

Numsa will be watching closely which unions will be participating in Cosatu’s marches next week as that will be the definitive indication of who is still on their side.

Vavi, who has been working on establishing a new labour federation in opposition to Cosatu, had tried to rope in other independent unions and federations to support UAC. But there has been some backtracking from these organisations also.

The Association of Mineworkers and Construction Union sent only a handful of members to the Pretoria march. On the eve of the marches, the Federation of Unions of South Africa (Fedusa) expressed reservations about UAC’s mass action strategy.

Fedusa general secretary Dennis George told Daily Maverick on Thursday night that there was no decision by his organisation to support the campaign and their preference was to engage government and other social partners on the issues.

George said some of the UAC organisers had made announcements that everybody had joined in the initiative but Fedusa could only do so once its national executive committee and management committee discussed the matter. “We cannot just march and then on the next day we don’t know what happens. We prefer an approach were there is dialogue for a strategy against corruption,” George said.

He said he believed the national anti-corruption forum should be used as a platform for dialogue as it was a “proper structure” with broad representation of organisations.

While Wednesday’s marches saw the participation of a broad cross section of civil society organisations, it remains to be seen whether they will maintain their support as the campaign evolves. UAC will also need to show that their mass action is being taken seriously and has an impact. For example, the initial goal was protecting the Public Protector, who has come to represent the most effective organ against graft and abuse of public resources. If there are further attacks on the office, UAC would have to do more than issue statements in condemnation.

The teething problems being experienced by UAC is precisely why establishing a political alternative to the left of the ANC is so difficult. While the need clearly exists for a worker party with leftist policies, there are too many disparate forces with different interests manoeuvring in that space. As with the United Front and talks towards a new labour federation, the clash of agendas makes it difficult to pin down a coherent strategy.

This is why the formula adopted by the EFF worked so well. There was minimal consultation and no time wasting. Malema and his deputy Floyd Shivambu took a decision to form a political party and established on the basis of one major cornerstone: economic freedom.

Numsa, Vavi and others are looking to gather large numbers and support first before getting the organisations they want off the ground.

The UAC marches this week proved that the numbers game is tricky, and that while people complain and protest about the state of our nation via social media and radio stations, getting them to participate in civic action is not easy.

UAC now has two weeks to deal with its conflicting agendas and organisational problems before it has to flex its muscle again. Now that there is mass awareness of the cause, the 14 October protests are a bigger test as to whether they can mobilise more South Africans to take a stand. DM