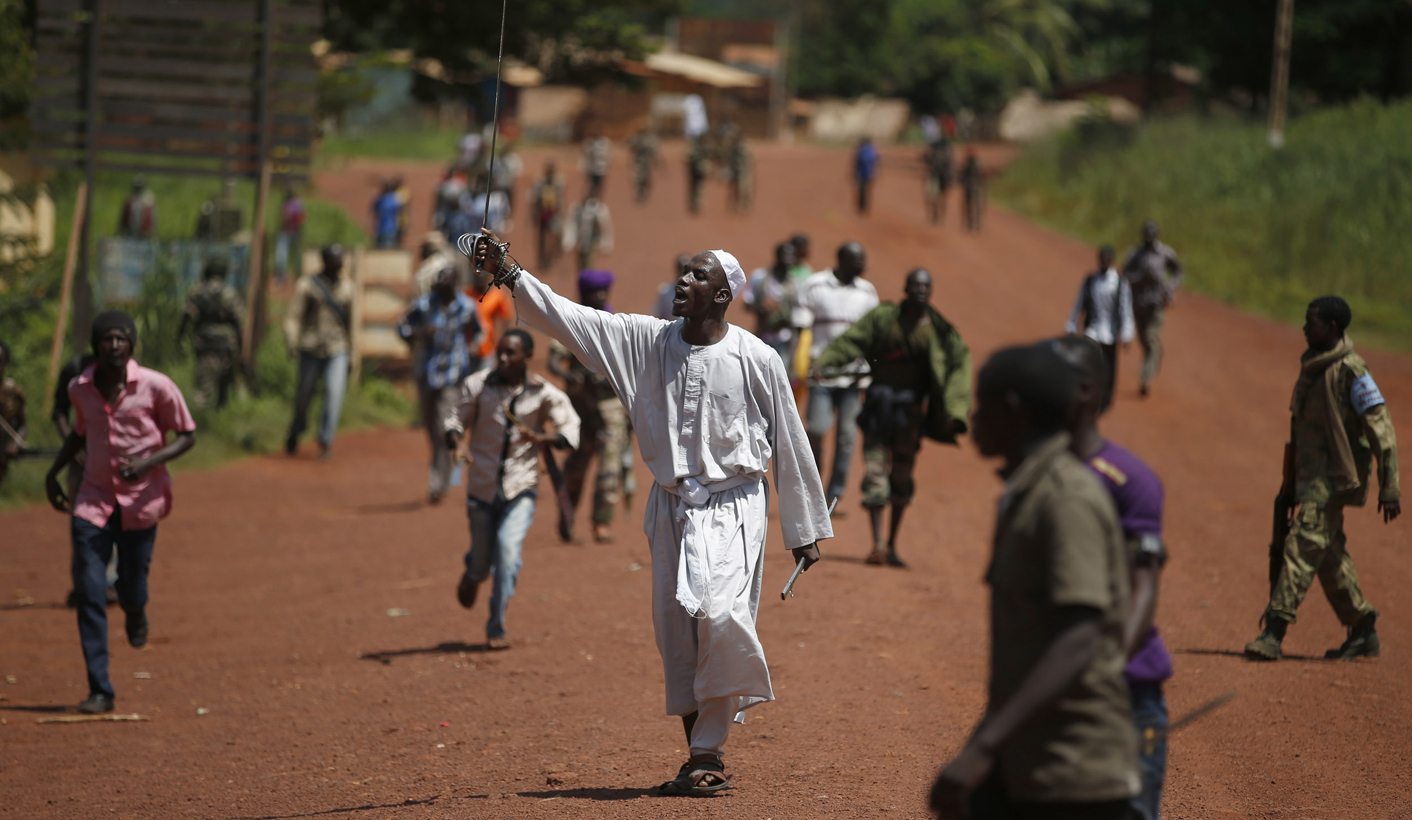 Ahead of presidential elections in October, the Central African Republic has once again been rocked by violence in the capital, Bangui. Will the polls go ahead? And who is really behind the current unrest? SIMON ALLISON reports.

When I spoke on Monday evening to Emmanuel Lampaert, the head of mission in Bangui for Doctors Without Borders (MSF), he was rattled. “There are more gunshots … phone me back in 15 minutes,” he said.

Lampaert is one of just a handful of foreigners who have been in Bangui long enough to witness the last outbreak of violence in the Central African Republic’s (CAR’s) capital city, in October 2014. That flare-up left at least 12 people dead and forced many nongovernmental organisations to evacuate their staff.

This time it’s even worse.

“This time, the degree of violence is much more serious with much higher consequences. In the last 12 months, this is the peak of violence,” he said.

Fighting began on Saturday, when the body of a Muslim motorcycle taxi driver – presumed murdered – sparked clashes between residents of the city’s third and fifth arrondissements (districts), with the opposing sides divided on religious as well as geographical lines. PK5, in the third arrondissement, is the city’s main Muslim area.

So far, at least 30 people have died, with some reports putting that figure as high as 48. Key government facilities including the police headquarters and the central prison have been attacked, and the violence is spreading to other major cities such as Bamburi. Dozens more people have been injured. In just two facilities, the Castor maternity hospital and the Mpoko camp for displaced people, MSF has treated 90 people. With new, unofficial checkpoints hampering movement across the city, there are likely to be even more people who have not been able to reach medical facilities – not to mention the general population who, for the most part, are too scared to venture out from their homes.

Complicating the situation further is the fact that, in the chaos, as many as 500 hundred prisoners have escaped from the central prison. “There is no one in the prison,” said a senior security official, speaking to Reuters.

Authorities, with limited means at their disposal, have struggled to contain the violence. President Catherine Samba-Panza rushed home from the United Nations (UN) General Assembly in New York, but she has little sway on the streets.

Meanwhile, the UN Multidimensional Integrated Stabilisation Mission in the Central African Republic (Minusca) seems to be making things worse: when thousands of protesters descended on the presidential palace to demand the reinstatement of the army, Minusca troops were accused of firing live rounds to disperse them. Minusca denies this claim.

Whatever the truth, this incident perfectly illustrates the complexities of politics in the CAR, where public protests are rarely a manifestation of people power – especially when the vexed issue of the army is involved. CAR’s army, the Forces armées centrafricaines (FACA), was disbanded as part of the political transition because of its close ties with former president Francois Bozize. Calling for the reinstatement of the FACA is therefore seen as tacit support for Bozize’s toppled regime – and it’s not hard to see Bozize’s fingers all over the current unrest.

“I think a lot of what’s behind the current violence in Bangui and in other areas like Bamburi is linked to Bozize. He’s taking advantage of the unpopularity of Samba-Panza, knowing that she’s a lame duck transitional president, as all transitional presidents tend to be. He’s hoping that through his proxy forces, the anti-balaka … he wil find his way back into power,” said David Smith, director of Okapi Consulting and an expert in the region.

The current instability takes place against the backdrop of elections scheduled for later this year (presidential on 18 October, parliamentary on 22 November). While the polls are intended to put an end to the conflict in the CAR, some analysts have been warning that the elections are too soon, and risk exacerbating the very problems they are meant to fix.

Pointing to the increased fragmentation and criminalisation of the CAR’s armed groups, and the limitations of the current disarmament programme, International Crisis Group argued: “It is also imperative to avoid the electoral process adding fuel to the fire. To do so, the transitional authorities should reaffirm Muslims’ equal rights, register them to vote, demonstrate the government’s concern for populations in the north-east, and diversify recruitment in the public service. The country’s international partners and transitional authorities focus too much attention on the electoral process in isolation from other issues: they should prioritise these other issues in their conflict resolution strategy, as elections alone will change very little in a country which today has ceased to function as a state.”

According to Smith, the elections are likely to be delayed – although he doesn’t necessarily agree that this is a positive step. “Even without (the current outbreak of violence) it was pretty clear the election date wouldn’t happen. They’re not ready,” he said, explaining that a mammoth voter registration process is nowhere near completed.

“When Seleka (the rebels who deposed Bozize in 2013) marched on Bangui, they burned all the government municipal offices all along the way; birth certificates, death certificates, property registrations, were all destroyed. No one knows who lives in CAR and who doesn’t. The records were destroyed.”

Nonetheless, Smith argues that it’s important that elections happen soon regardless. “Of course CAR is not ready for elections, if you wait for CAR to be ready for elections, they’ll never have them. But at least there will then be a government in place that can make some plans. Wil we have good leadership in place? Probably not. But at least it will be a government that can be accountable. The transitional government is not really accountable to anyone,” he said. DM

Photo: A man brandishes a sword during clashes between French soldiers and Seleka fighters in Bambari May 24, 2014. REUTERS/Goran Tomasevic.