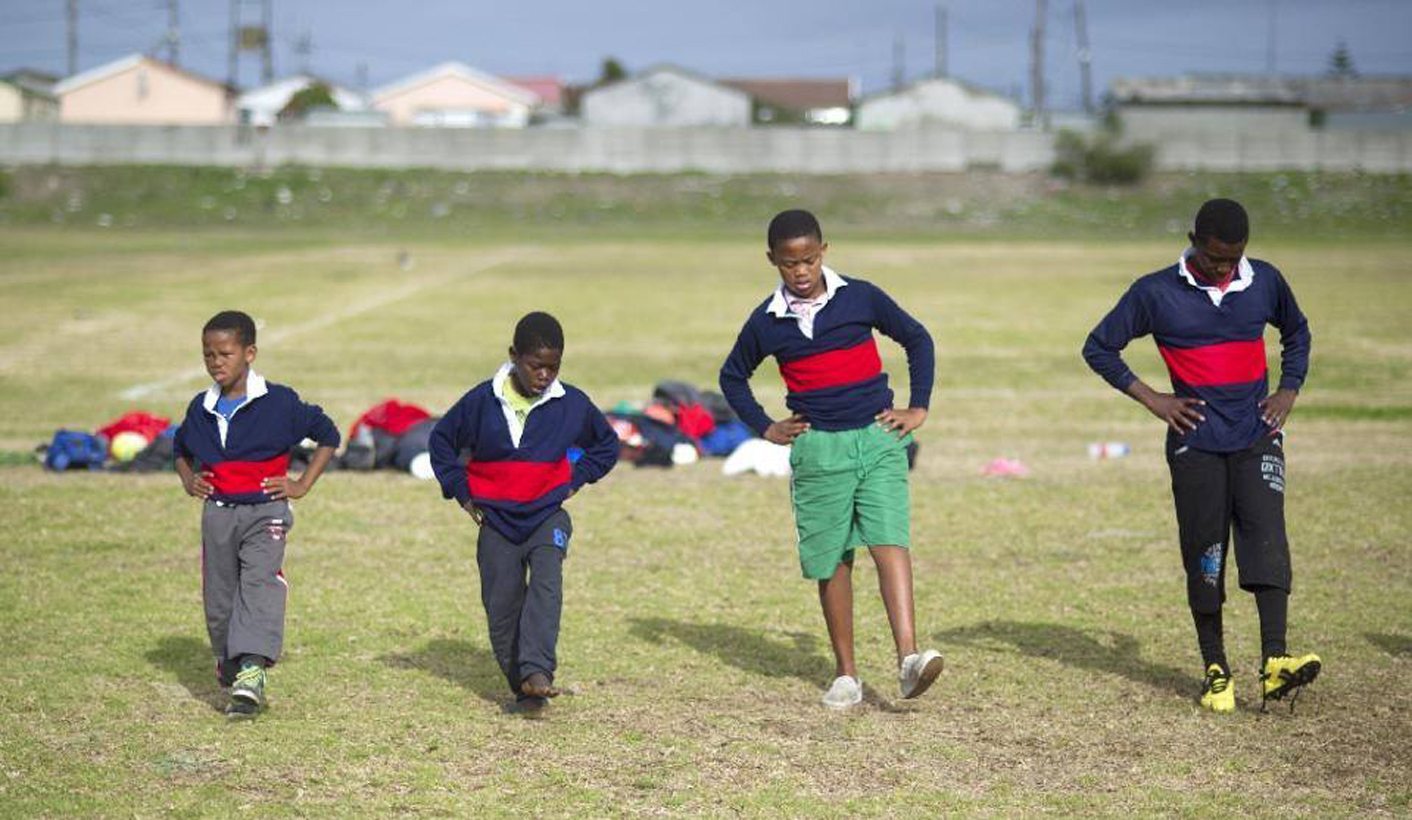 From having to deal with coaches being robbed at gunpoint to helping kids with malnutrition become rugby ready, this little rugby academy in Khayelitsha has taken giant strides in a very short time. By ANTOINETTE MULLER.

(Full disclosure: the writer of this article is a regular volunteer at the CONNECT Sports Academy.)

Little more than a year ago, Daily Maverick ran a story about a small rugby academy in Khayelitsha. Funded entirely by donations and with a number of the kids without even boots or shorts, the academy was very much in its infancy. Young players, many who had never seen a rugby ball before, were learning the basics of rugby through Touch rugby. At the time, the academy knew where it wanted to go, but wasn’t quite sure how to get there.

Since then, much as changed for the men running the CONNECT Sports Academy, Murray Ingram and Yanga Qinga, as well as the kids who sign up with the academy. To date, CONNECT has produced two Western Cape Touch Rugby players with a further four likely to join the ranks in October and it’s not just men who are benefiting. Girls, too, have started to rise through the touch rugby ranks and CONNECT has formed a strong partnership with the Western Cape Islanders, under the mentorship of coaching stalwart Labeeb Levy. However, it is in contact rugby where they have really stepped up the game.

In April this year, the academy entered their first ever contact tournament, hosted by the Atlantic Rugby Academy. CONNECT’s Under-11s rucked, mauled and tackled their way to the semifinals of the tournament. It so impressed Atlantic founder Campbell McCraw, a Hamilton’s and Western Province legend, that he asked CONNECT to join forces with Atlantic.

“As somebody who is passionate about transformation in South African rugby and with my experience working with developing youth at Hamilton’s, it was a no-brainer to use this opportunity to not only continue Atlantic’s quest for transformation, but also unearth some new talent,” McCraw told the Daily Maverick.

Atlantic had already started to make their own inroads in terms of transformation, with a large group of players from Ysterplaat playing for the academy, so the partnership was simply a natural extension.

With rugby season now coming to an end, the Atlantic Academy boasts scalps such as Westerford, Laerskool Noord-Eind, Sweet Valley, Primrose, Jan van Riebeeck and Western Province Prep. A number of the Under-13 players had not touched a rugby ball before April, but are now mainstays of the Under-13 team who most recently walloped Primrose 71-0 with a 70%-transformed team.

The academy has also expanded its coaching staff with five black coaches, all from Khayelitsha, added to the Action Volunteers Africa (Ava) programme, assisting the academy and receiving a small stipend from Ava. No other volunteers earn an income from the work they do, though, and the cost of keeping the academy running is putting the programme under threat.

With transformation being such a hot topic in South Africa at the moment, you would think companies would be falling over their feet to support the work CONNECT does, but that has not been the case. CONNECT retains its Khayelitsha roots and, with many children coming from the area, the academy has seen costs for transport and nutrition rising fast.

“We have almost become victims of our own success. We have identified a huge talent pool that basically come from within a few streets of each other and the more talent we identify the more our costs escalate,” director Ingram told The Daily Maverick.

“We have been quite surprised at the reluctance from corporate South Africa to come to the party and help us keep the academy running. It’s everyone’s responsibility,” he adds.

CONNECT holds two open training session in Khayelitsha every week. It is through these sessions that raw talent is identified, but these kids need support on all levels. From kit to food and transport costs, the academy is in desperate need of donations from the public in order to keep functioning.

Ingram adds: “Every single thing you and I take for granted is something we have to factor in for the academy. We have to feed the kids at every match and training session because, for many of them, this will be the only meal they have all day.

“It is not uncommon for kids to come to our academy with signs of malnutrition, swollen bellies and bad skin. We cannot allow kids to play rugby if they are not properly fed, these are the kinds of things people who do ‘drop in’ clinics often don’t consider. Nutrition is critical.

“Kids need kit and we need to transport them to matches and training on our account because their parents are not in a position to fund budding sports stars.”

The academy is proud of its hands-on approach and is involved in every facet of the youngsters’ lives. Building relationships with their families is critical, as is dropping each and every child off on their doorstep if training runs late to ensure their safety, but even this has its dangers. Most recently, three of CONNECT’s coaches were robbed at gunpoint after walking the kids home. Gone were the 40-plus MyCiti cards used to transport the kids every week.

When one of the youngsters had his boots stolen on the morning of day when he had two matches to play, it was Twitter once again who came to the academy’s rescue with a good Samaritan dropping off a pair of shoes as the first game was about to start.

“People on social media were great when our coaches got robbed, we asked people to help us out and we quickly raised the funds, but this is not a sustainable way to operate,” Ingram says.

To help ensure the safety of the kids and try to find a sustainable income stream, the charity is currently on the hunt for a minibus sponsor, but it has proven challenging in touch economic times.

Funding is one thing to overcome, but CONNECT are also trying to change the perception of what transformation entails. While nobody is denying that there is an element of institutional racism in South African rugby, the larger problem is at grassroots level. Access to resources, from the most basic to larger issues like facilities, is one of the biggest challenges when it comes to developing talent.

“Around 40% of professional rugby players in this country come from just a handful of schools. These schools have access to the best resources, from playing fields to coaches. That’s where the biggest challenge with grassroots development comes in,” Ingram says.

In the short term, the academy is providing all those resources to talented youngsters with a long-term plan to ensure these kids have the opportunity to go to those top rugby schools when they make the leap from primary to high school. There is nothing glamorous about the effort. Hours and hours are spent driving kids around, preparing their food, coaching them – rugby and life skills – and holding meetings with parents is all part of the parcel. For the men in charge, it often means starting their days at 5:00 and working through until 23:00 to make sure every single child is safe and normal day jobs are not neglected. While many will view the work CONNECT does as something unique and special, for Ingram it’s simply the only way forward.

“It’s easy to grandstand about transformation and talk about it and get angry about it on the internet. To take action and do something about it is a different story. But we cannot sit back and let this talent go to waste. Most of the kids in our academy come from within a few streets of each other. There are millions of other talented children we haven’t even seen. Just imagine what could be possible if everyone had equal access to opportunities? You cannot live in a country like South Africa and sit back doing nothing, Ingram concludes.

Who knows, with a little bit of support from those in the right positions, the CONNECT Academy might just become the blueprint for a successful transformation programme in South Africa. DM