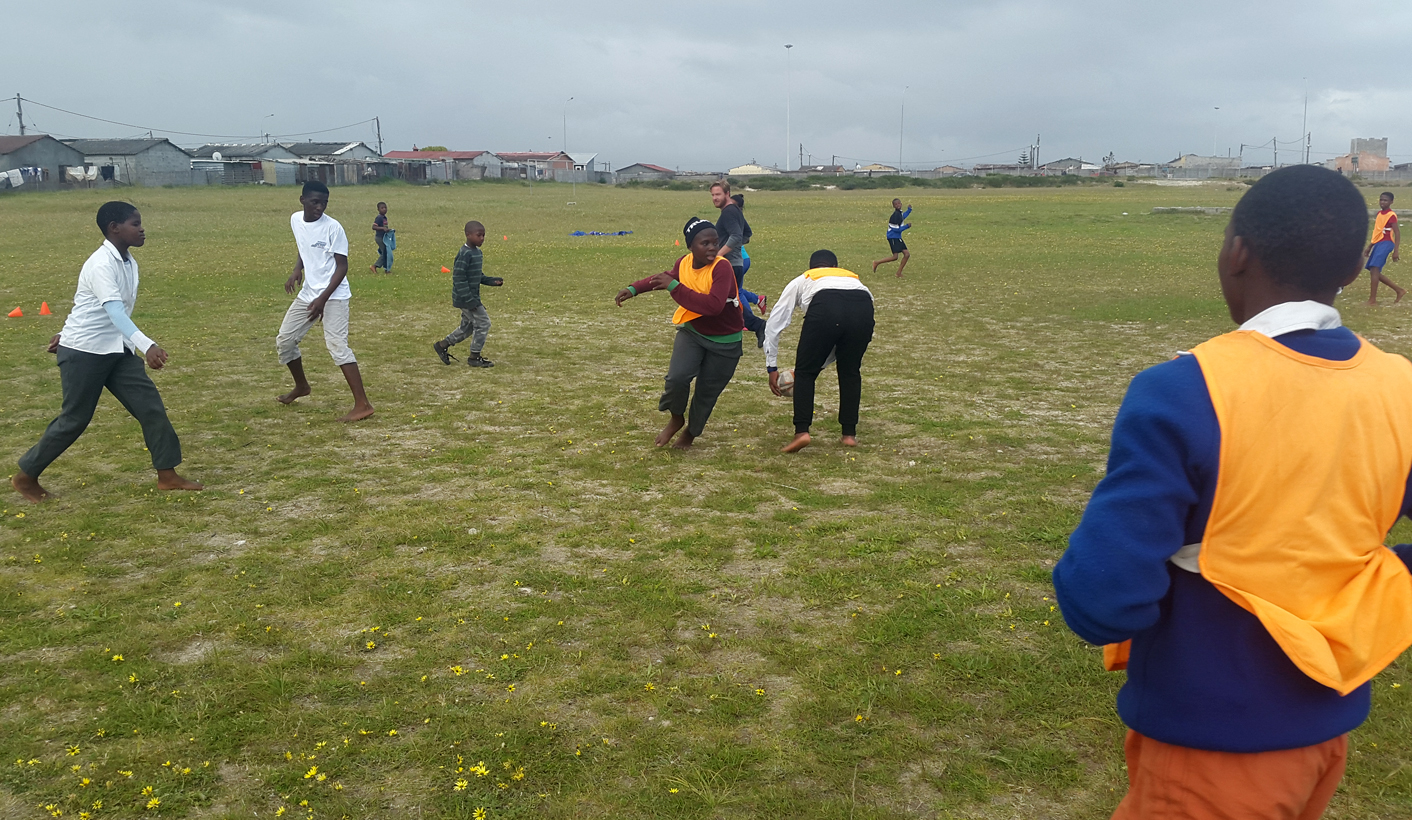 While those in high places bang on about quotas, others are actually trying to make a small difference in the fabric of South Africa’s rugby society. Yanga Qinga and Murray Ingram run a rugby programme in Khayelitsha which gives kids – boys and girls – the opportunity to do something a little bit different and which will, hopefully, one day unearth a future South African rugby star. By ANTOINETTE MULLER.

Transformation in sport, particularly rugby, is constantly in the headlines. It is endlessly debated in column inches on the back pages, not to mention comment sections all over the internet. It’s all good and well to talk about it, but oddly enough it’s not often asked: what exactly is being done about it? If the statistics from the government’s pilot programme from last year are to be believed, then not nearly enough. Facilities are a big problem and simply having access to the sport is a massive stumbling block in getting young black kids playing rugby. But where there is a will, there is a way. And where there’s a way, there are usually a few inspiring people who are trying to make a difference.

Meet Yanga Qinga and Murray Ingram, two young men determined to do their part for the future of transforming South African rugby. They run Connect Community Development, a programme which has been operating in Khayelitsha informally for about five years and formally for about 18 months. They focus on educational support, youth development and enterprise development and this year started to focus on rugby.

Together, the pair run the Connect Community Rugby Development Programme in Khayelitsha which has helped 40 kids in the community not just learn the basics of the sport, but also play it competitively.

The group already had a chess programme in the area, but in April this year, they took on the challenge of teaching a group of children the basics of rugby. For six weeks, a group of under-8 and -9 boys were given a crash course on how to play. They were entered into the Spur Mini Rugby Tournament and were victorious in one of their two games.

Following the success of the introduction at younger age group level, the programme was extended the under-13 boys at Harry Gwala school, with a view to enter them into a Sevens tournament at the start of September. It was found that most of the boys were just over the age limit, but being deterred is simply not in Qinga and Ingram’s modus operandi. They simply entered the kids into the in2Touch league at Villagers in Claremont.

“The team is currently called [the] Connect Rugby Development team and in time, we will leave it to the players to choose a name for it,” Qinga explained to the Daily Maverick.

Currently the teams play once a week in the six-a-side league at villagers. There are also practice sessions every Monday to Friday. The programme is spurring on interest and they are hoping the programme can extend to girls who want to play and that there will be a mixed team together in the near future. The team recently fielded their first girl when they played Bishops.

“We ran them really close and they narrowly beat our team by three tries to two,” Qinga says.

When transformation is debated it is often said that black kids “aren’t interested” in rugby, but Qinga and Ingram have found the complete opposite. For them, recruitment of players has been easy, as kids in the area are happy simply to have something to do.

“We have been working with the schools for quite some times, through our mass participation programmes. Some of these kids are already in our chess programme. The scholars are always looking for something to do and they simply answered the call to try something new. One or two have a rudimentary understanding of the game and the rest are happy to be expressing themselves in a new avenue in their lives,” Qinga explains.

It seems simple and straightforward. Make the opportunity available and the rest will happen by itself. But, of course, these sorts of projects are not without challenges. Some of the kids do not have even the most basic equipment, like shorts, jerseys or socks. Parents are not in a position to fund these expenses, but the team have used social media and have been assisted by the In2Touch league with some of their stumbling blocks.

“Our major challenge is access to resources and we need just about everything from kit to transport. The in2Touch Villagers administration has been very generous to us, firstly by allowing entering into the league for free as well as donating used rugby balls to tour team. The rugby balls are used for three match-days and then recycled, so we have received high quality equipment from them, and for that we’re very grateful,” Qinga says.

Things that ordinary people take for granted simply aren’t available to the kids in the township. From next year, when the teams progress from touch to contact rugby, they will need gum guards, for example, so simple; yet something that children in the community simply cannot afford.

“Some of our players don’t have even the most basic equipment, shorts, jerseys, socks; and when we begin playing contact next year, they’ll need gum-guards too. These are basic things that we may take for granted, but their parents are in no position to fund them,” Qinga says.

“Our transport costs are R600 per week and depending on the vehicle we manage to get we’re lucky to take eight players out of a possible 12. Fortunately, our business incubation project, iCafe, sponsors our food, which is quite a lot, considering they’ve got the appetite of rugby payers,” he adds.

Still, there are plans for expansion to grow the programme further. Until the end of the year, players will keep on playing touch rugby before pre-season condition and fitness starts early next year. The plan from there is to enter teams into the Western Province Schools rugby league, specifically with the under 11s and under 16 players. Currently, the team is also running a holiday programme where the fundamentals of rugby are taught to the kids at Harry Gwala High.

This is an important part of the programme since there is little to do over the holidays for the kids in the townships. Qinga and Ingram both focus on creating safe spaces for the kids and giving them something to do when school is on hold. Fostering a caring community and offering children in these communities something to do is crucial for various reasons, but most importantly, it offers a sense of belonging.

With limited resources and a few logistical hiccups, Ingram and Qinga have already made a huge difference in the lives of a number of kids in Khayelitsha. They have dreams to make it even bigger.

“We are doing our bit, from a grassroots level, for the development and transformation of rugby. We would love to have an academy where children can play their rugby in Khayelitsha as opposed to having to take their talents elsewhere. We would love to create an environment where school rugby in Khayelitsha can compete with the recognised schools in the city, on an even footing,” Qinga says. DM

For more information on the Connect Community Programme, visit their website: www.connectcommunity.co.za