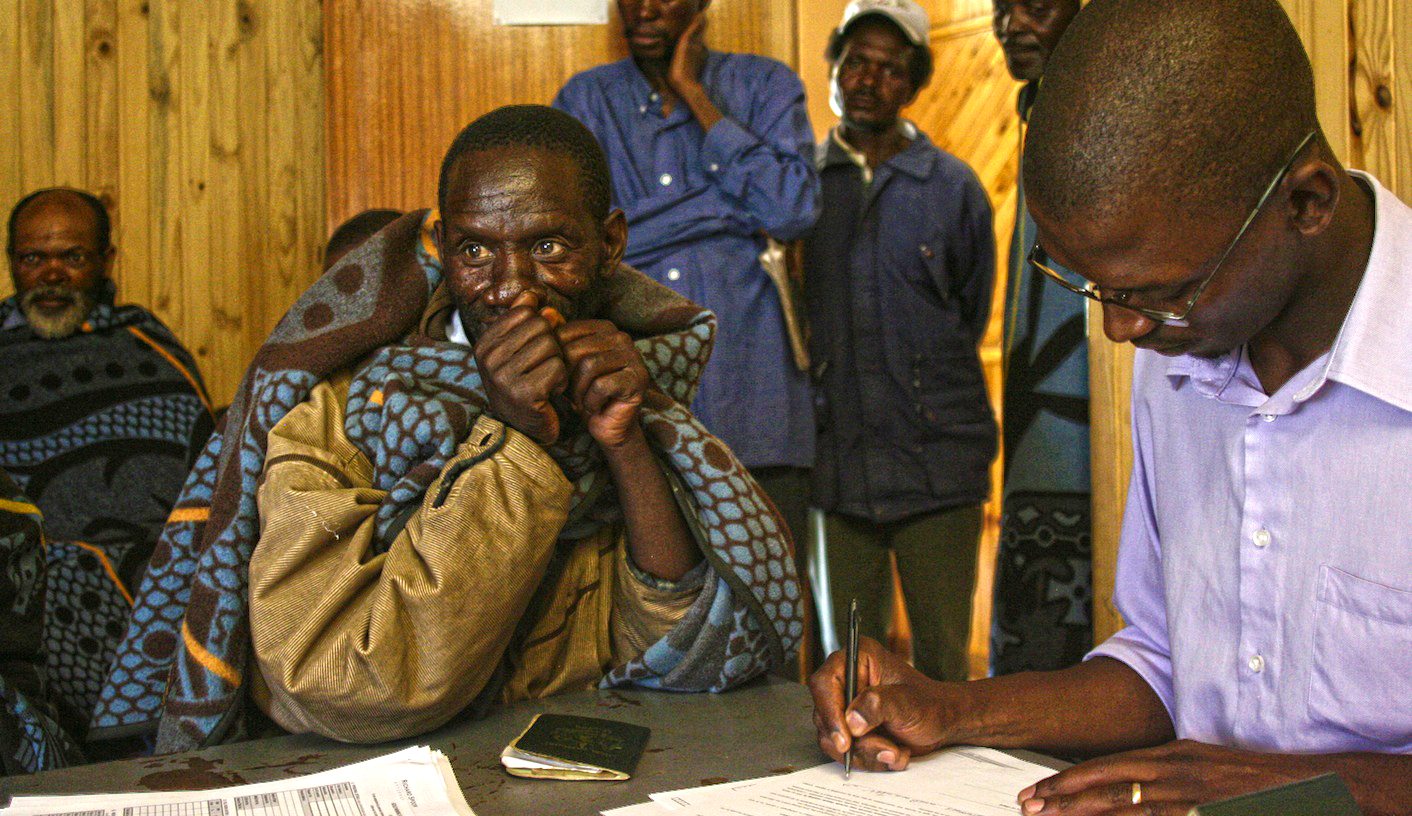 Silicosis could become one of the defining issues for workers in our time. Tens of thousands of mineworkers are trying to launch a class action suit against gold mining companies. Now civil society groups are on board, claiming that occupational lung diseases not only affect mineworkers but perpetuate the cycle of poverty in labour-sending areas. By GREG NICOLSON.

“For decades gold mines have treated their workers as inferior human beings and shown a shocking disregard for the health of these workers,” Treatment Action Campaign (TAC) general secretary Anele Yawa said on Thursday. “The exploitation of, mostly poor black workers, mirrors the apartheid and colonialist exploitation of workers that we have seen throughout the continent. That even in post-apartheid South Africa the rights of mineworkers are routinely violated is a national disgrace.”

Yawa was speaking as TAC and Sonke Gender Justice announced their intention to join a class action lawsuit against South African gold mining companies as friends of the court. A decision will be made as to whether it should proceed in court in October. The class action includes 56 class representatives of more than 25,000 people. But up to 200,000 people across Southern Africa could stand to benefit from the legal action.

The claimants, represented by Richard Spoor Attorneys, Abrahams Kiewitz Attorneys, and the Legal Resources Centre, believe 32 gold mining companies are liable for failing to protect employees from silica dust inhalation that has led to their contracting occupational lung diseases. Within the class action there are two classes: gold miners and the dependants of those who have died as a result of silicosis, and gold miners with pulmonary tuberculosis and the relatives of those who have died of pulmonary tuberculosis. The class includes miners with cases from 1965 onwards.

TAC and Sonke want to join the application to question the denial of the mineworkers’ constitutional rights and show the negative impact the gold industry has had on labour-sending areas. Sonke policy specialist Tanya Charles said: “This is the story of how gold mining impacts on girls, women and communities.” The applicants want to make that impact visible. Women in communities are left to care for their sick men, perpetuating the cycle of poverty facing black women in rural areas. Charles said complete displacement and a disregard for and neglect of mineworkers has an impact on women and girls. Sonke has been investigating the impact silicosis and tuberculosis among mineworkers has on communities and will use the information to explain the broader implications of occupational lung diseases.

“Are we not all human beings? We demand justice for the hundreds of thousands of workers whose lungs have been ruined in the gold mines,” Yawa said on Thursday. “These mining companies are running away with murder. When these miners get sick they get kicked out. The state inherits the burden.”

Mineworkers with silicosis can claim compensation, but the institutions and process behind it are in disarray. Section27’s John Stephens said on Thursday that the civil society groups trying to join the case will look at the impact occupational lung diseases have had, the responsibilities of the companies and the lack of other recourse. He pointed out the challenges in accessing that compensation, both institutional and socio-economic. “There are no other alternatives. If these people cannot proceed in a class action they have no redress. There is no other way to hold these mining companies to account,” said Stephens.

There might be one way, however. Or more correctly, 25,000 other ways. If the class action is not permitted to proceed, attorneys for the clients have the option of lodging all of the claims individually.

“The companies will be defending the action because they don’t believe they are liable,” Alan Fine from Russell and Associates said on Thursday on behalf of eight large gold producers. They are aware it is a serious issue, he said, as indicated by an initiative launched to address the matter. Last year, Anglo American South Africa, AngloGold Ashanti, Gold Fields, Harmony and Sibanye announced they would engage all stakeholders to “design and implement a comprehensive solution that is both fair to past, present and future gold mining employees, and also sustainable for the sector”.

While opposing the court action, the companies have been working with the government to try to improve the efficiency and effectiveness of the current compensation options while also establishing one-stop centres to diagnose and treat silicosis. Fine said they are still committed to finding a fair but sustainable solution.

Stephens said on Thursday that the mining companies, particularly AngloGold Ashanti, Harmony and Gold Fields, were aggressively opposing the civil society groups’ attempts to join the class action. Georgina Jephson from Richard Spoor Attorneys said they tried to engage with the mining companies but had not had any luck getting them to accept the class action, which would prevent an onslaught of individual claims.

TAC and Sonke Gender Justice’s efforts to join the case will be heard in the South Gauteng High Court next week. Pickets are planned at the court as well as Teba’s offices in Lusikisiki. DM