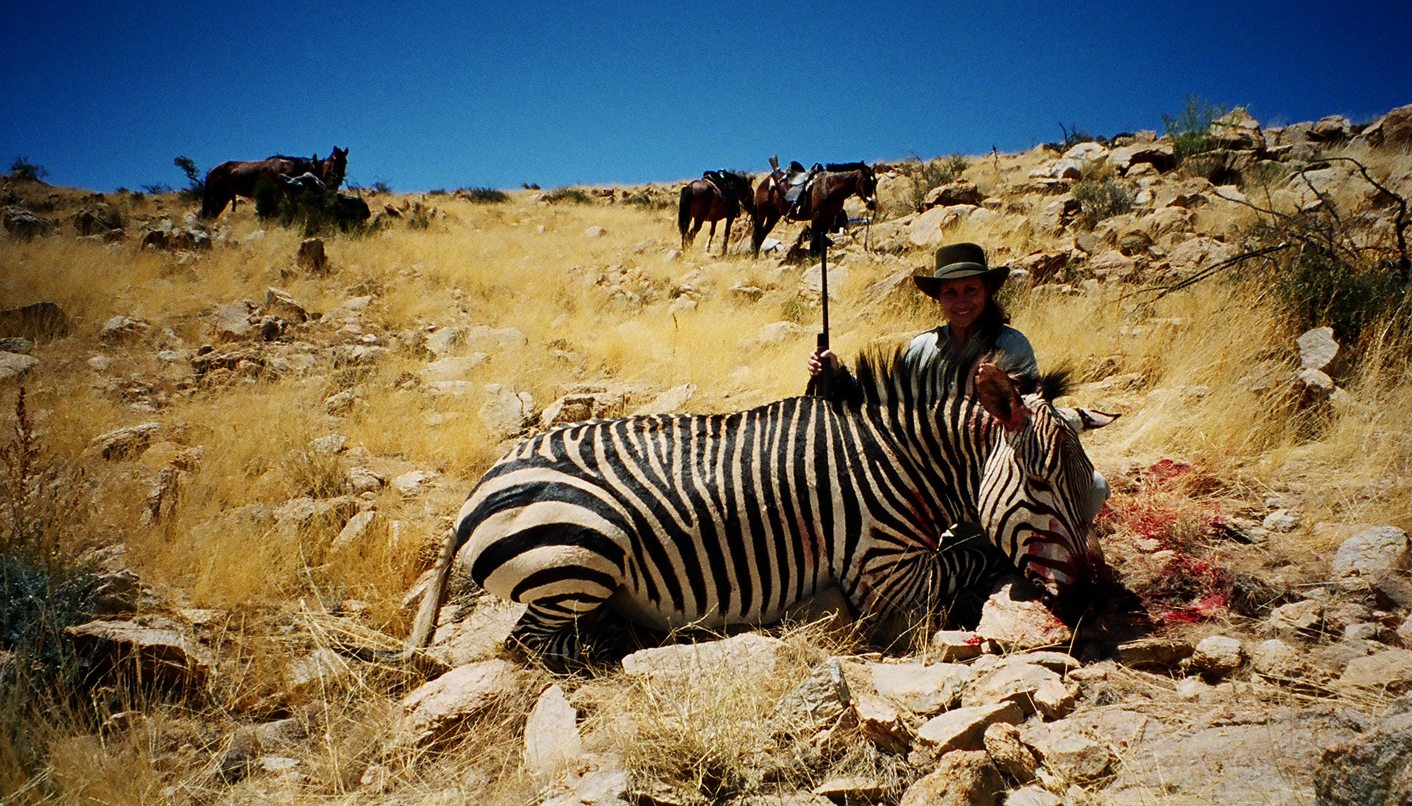 Throughout history, human beings have killed wild animals to defend, avenge, profit or feed themselves. They still do. But there are a few who kill for another reason: pleasure. Why the pain and death of a beautiful creature gives them gratification is puzzling – perhaps they had father issues as teenagers – but there are more important questions that need answers. DON PINNOCK tries to sort out the truth from the rhetoric.

Are trophy hunters protectors of biodiversity, as hunting associations and some conservationists claim, providing funds and a reason to protect wild areas? Or are they heartless killers of defenceless wild animals who need trophies to reinforce their fragile egos? The more vexing question – leaving aside for the moment peasant farmers defending their stock, commercial farmers shooting for biltong and poachers harvesting animal parts – is whether the only way to sustain wildlife in Africa beyond its national parks is for rich hunters to be able to kill it.

To make any headway with these questions, we need to ask if hunting protects wilderness, if it’s sustainable and who gets the money? Why hunters take pleasure in killing we’ll leave to their therapists.

Safari operators are custodians of at least 1.4-million square kilometres of land in sub-Saharan Africa, exceeding the area encompassed by national parks in those countries where hunting is permitted by more than 20%. This is clearly a boon for biodiversity.

There is no certainty about what this land use would be if it wasn’t for hunting. If it was returned to farming the incentives for conservation would undoubtedly decline.

There’s also a good argument that hunting has the lightest footprint. While privately owned hunting areas may be empty of people, most professional hunting outfits have small camps, limited staff and few overheads other than equipment and licences. Any local training is confined to trackers and a camp chef. Apart from the animals they hunt, their footprint on the land is light.

Tourism outfits, on the other hand, build extensive facilities of largely indigenous material, train staff in a variety of skills and maintain areas for photo safaris. With roads and constant vehicle access, however, their footprint is much heavier.

Associated Private Nature Reserves, which borders the Kruger National Park and organises hunts of animals that wander into members’ unfenced lands, generally uses this revenue for conservation. Critics, however, have asked why it requires hunting revenue for this purpose, given the considerable profits it makes from tourism, and query whether hunting simply supplements elitist lifestyles. Does hunting preserve habitat? In limiting development, it undoubtedly it does.

Who gets the money?

In dollar terms, trophy hunting certainly accrues revenue, though it’s often difficult to follow the money. This is partly because of concern in the industry over what are seen as prying ‘animal rightists’ and partly because of intermittent overlaps with poaching and trafficking in animal parts.

Walter Palmer, who illegally shot Cecil the lion in Hwange National Park, provoking an international firestorm of protest, reputedly paid $50,000 to pull the trigger. However none of this would have accrued to the government, communities or conservation as the hunt was illegal and the money paid to the landowner and professional hunter.

South Africa alone hosts around 9,000 hunters a year. The Environmental Affairs Minister Edna Molewa claims this is worth R6.2-billion annually, although a scientific study by Economists at Large puts it at R112-million (a small fraction of tourism revenue).

Roderick Campbell of Economists at Large questions the value of trophy hunting other than to gun shops and hunting outfitters, pointing to a report by the United Nations Food and Agricultural Organisation that found only 3% of hunting revenue went to communities living in the area. “Local communities are key stakeholders for conservation initiatives,” he writes, “yet they receive minimal benefits from trophy hunting.”

In some areas, the limited trickle-down from trophy hunting could, in fact, be fuelling support for poachers, who pay shooters and bearers in cash.

Wild populations in Africa have been dropping steadily since firearms tilted the balance in favour of hunters 200 years ago. In the last 20 years, however, species decline has been catastrophic. Most of this is caused by habitat loss from human population increases plus, particularly, massive poaching of elephants, rhinos and lions for Asian markets.

How does trophy hunting feature? The stated ethic of hunter associations is that only animals past breeding prime should be bagged. This is deemed sustainable as the loss of these animals is thought to have little impact on the species as a whole. Through ignorance, cheating and straight criminality, this ethic is often breached.

One of these breaches is in the issue of ‘problem animal’ permits – permission to shoot animals because they’re in conflict with humans. These are being exploited by unethical operators across the continent.

Certainly in Zimbabwe and Namibia and probably elsewhere, problem animal permits can be obtained even before the animal to be killed is selected. A variation, in Namibia, is a ‘snipe’ hunt where a hunter with a permit can shoot any elephant a community declares to be a problem, generally because they simply want the meat. Several rare desert elephants have been shot this way. Strangely, ‘problem’ animals always seems to have the biggest tusks or largest, darkest manes.

Another cheat is to lure an animal out of a park, as was done with Cecil the lion, and shoot it on private land. The only reason this was discovered was because Cecil was wearing a tracking collar.

Given the requirement to shoot only ageing animals, the inability (or unwillingness) of hunters and trackers to age them correctly means the injunction is generally observed in its breach. In this way younger breeding animals are being taken out of the gene pool.

The idea that older individuals are no loss to their herds if killed is countered by a study published in the Journal of Wildlife Management by researchers Jeanetta Sellier, Bruce Page, Abi Vanak and Rob Slotow. They found the selective removal of a few large trophy or older males from carnivore and antelope populations led to the destabilisation of social structures and a loss of essential social knowledge. The consequences were infanticide, reproductive females using sub-optimal habitats and changes in offspring sex ratios.

This was a particular problem for elephants which are extremely communal. “Older bulls have a social network with high centrality and strong bonds,” they write. “Consequently, the elimination of older bulls may negatively affect social cohesion in bull elephant groups, increasing the  reproductive tenure of younger males. This can increase their length of musth, leading to elevated aggression, killing people and killing white rhino.”

Their conclusion was that that in the Limpopo/Botswana area they studied, trophy hunting both destabilised herds and was unsustainable. They added that large bulls with trophy tusks – so essential to photographic tourism which yielded higher returns – were disappearing. This study echoes the conclusions of studies by Iain Douglas-Hamilton in Kenya and Elephants Without Borders in Botswana.

Is canned hunting the answer?

Lions have always topped the list of desirable prizes. As their population in the wild declined, the status of having a perfect lion to hang on the wall and brag about increased. Being mostly both rich and busy men, foreign hunters demanded shorter hunt times and an assured kill, for which they were prepared to pay top dollar. In South Africa, a solution was to farm lions like cattle.

There are no completely trusted sources on the numbers of lions in captivity in South Africa. The reason is that not everyone who breeds predators is obliged to be a member of the South African Predator Association (SAPA)and not everyone that is a member provides reliable or updated stats.

Provincial governments, which ought to have some sort of record, don’t and they seem to rely on the figures from the SAPA and hunting bodies. It’s head, Pieter Potgieter, estimates the number of captive predators at between 6,000 and 8,000. Most of these, around 7,000, are lions – the others are tigers, cheetah, leopard, dogs and exotics held in around 200 facilities.

Over the past decade, however, there have been disturbing leaks about the conditions under which these so-called ‘canned lions’ are bred. A film just released, Blood Lions, reveals the shocking realities behind this burgeoning business. Possibly as a response, Professional Hunters’ Association of South Africa (PHASA) Hermann Meyeridricks sent an e-mail to members stating that the PHASA’s position on captive-bred lion hunting “is no longer tenable”.  He says there has been little progress in getting the government and predator breeders to “clean up” the industry.

He also acknowledges that opposition to such hunting is no longer restricted to “just a small if vociferous group of animal-rights activists” but that “the tide of public opinion is turning strongly against this form of hunting”.

As a public relations exercise, captive-bred lion shooting (it can hardly be called hunting) has been a disaster. Added to the international fury about the killing of Cecil, it has led to a groundswell of opposition to all trophy hunting.

Australia recently banned imports of lion parts or trophies, airlines are refusing to transport them, Born Free USA called on concerned citizens to write to the United States Fish and Wildlife Service urging them to stop all lion trophy imports and Europe’s Nordic Safari Club has removed all lion trophies hunted in South Africa from its official record books.

The question we’re left with, apart from the psychology of these strange people who kill for pleasure, is whether trophy hunting is, in the broader sense of the word, sustainable. To answer that, it’s necessary to get behind hunters’ claims of preserving wilderness with money for trophies and public outrage at colonial-style killing safaris by rich white men.

Preserving wild lands for hunting is a way to maintain higher levels of biodiversity and, in certain situations and certain places, the damage caused by trophy hunting is limited, though this may change as populations decline. But, in pursuit of the Big One, hunters very often cheat, crippling sustainability of prey species.

Coming on top of human land encroachment and poaching in Africa, hunting for fun is becoming increasingly problematic. And we are left with a conundrum that needs to be at the centre of any discussion about trophy hunting: outside of game parks, is the only way to sustain wildlife in Africa to allow rich foreign hunters to kill it?

Humans are in the process of bringing about the Earth’s sixth extinction of life forms. From an African population of more than 1-million lions in the mid-19th century, there are maybe 20,000 left in the wild. Around 36,000 elephants are falling to rifle bullets each year and more than 1,000 rhinos were poached in the species’ heartland of the Kruger Park last year. In the face of such declines, can we really afford to kill, for personal pleasure, even one of this planet’s wild creatures? DM