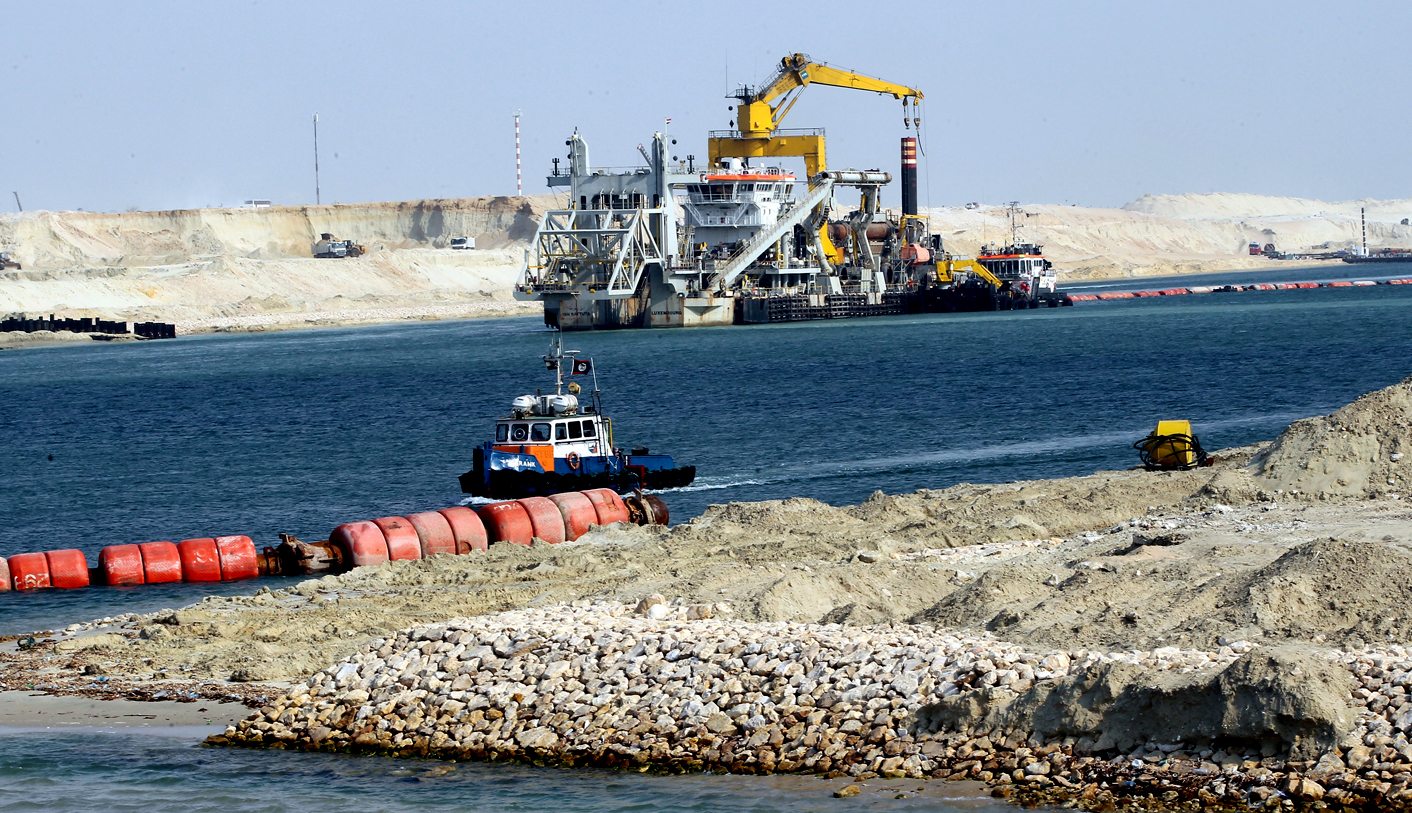 On Thursday, the Egyptian president will formally open the 72km extension to the Suez Canal. The fact that it’s a massively impressive infrastructure project, completed in record time, is not in doubt. But is it necessary? Should cash-strapped Egypt be spending its money on more sensible things? And what about those power station-sabotaging jellyfish? By SIMON ALLISON and HELEN BARTSCH.

The expansion of the Suez Canal, perhaps the world’s most important waterway, was not without its public relations blunders. Excited about the project, Egypt issued a Suez Canal commemorative stamp last year, which was a great idea until somebody realised that the stamp actually depicted the Panama Canal. Then there was the celebratory Egyptian flag-themed bunting put up this week – another good idea, only missing the mark because local authorities used cut-price Yemeni flags instead.

But let these mishaps not detract from the scale of Egypt’s achievement. In a little over a year, the country has carved a new, 72km-long passage out of the desert, which will nearly double the Suez Canal’s capacity. It is a massive undertaking, and hackneyed comparisons with Egypt’s other great infrastructure project, the pyramids, are not entirely groundless (although the Suez Canal expansion was noticeably less bloody).

At the moment, the canal can handle 49 ocean-going vessels every day; when the new passage opens, in a lavish ceremony on Thursday, this number will rise to 97. The government expects to slash ship waiting times from 11 hours to just three hours, and to triple revenue by 2023 (to a tidy $13.2-billion per year). And all this achieved two years ahead of schedule, and on a budget of $8.5-billion that was financed domestically.

For Egypt’s military government, this is a coming of age moment, a physical expression of both its ambition and its ability to deliver on that ambition. “It is the Egyptian people’s gift to the world,” said President Abdel Fattah al-Sisi, who underscored his message with the language he knows best: heavy-handed symbolism.

As the Independent described: “As the boats turn around a bend close to the Ismailia dock, one bank has been taken up with a large sign saying ‘Welcome to Egypt’. Next to it is a detailed rendering of a dove flying out of a pair of hands, accompanied by a picture of Egyptian soldiers in battle, surrounded by Egyptian flags as fighter planes fly aloft. The tip of one of the soldier’s rifles almost touches the wings of the dove, as if to bless it.”

The benefits aren’t just economic, or political – there’s an important element of maritime safety at play too. “There have been more and more crashes and collisions of ships in the congested waters at Port Said approaching the canal and in the lakes in the middle. It’s going to reduce the chances of a collision resulting in an environmental disaster which is vital for future maritime safety and security,” said Institute for Security Studies researcher Timothy Walker.

The original Suez Canal was opened in 1869, making it 146-years-old. Few thought such an ambitious project was possible. “I confess that my scheme is still a mere dream, and I do not shut my eyes to the fact that so long as I alone believe it to be possible, it is virtually impossible … The scheme in question is the cutting of a canal through the Isthmus of Suez. This has been thought of from the earliest historical times, and for that very reason is looked upon as impracticable. Geographical dictionaries inform us indeed that the project would have been executed long ago but for insurmountable obstacles,” said Ferdinand de Lesseps, the French diplomat who oversaw the construction of the canal, somehow surmounting those obstacles in the process.

Since then, the Suez Canal has become a global economic artery, linking Europe to Africa, the Middle East and Asia. By cutting out the long loop around the Cape of Good Hope, it makes ships’ journeys shorter by an average of nearly 10,000km. Without it, globalisation would be a lot more expensive, and slower. This means it strategically important too: it’s no coincidence that one of the most fraught moments of the Cold War was the Suez Canal crisis, when the UK, France and Israel invaded Egypt to make sure the canal remained open to all.

Recognising this significance, and embracing its monopoly, Egypt has taken an $8.5-billion gamble that the canal will only become more important in the next few decades, and that its new, enhanced capacity will be matched by a rise in traffic. Only then will those impressive revenue projections (which have not been independently verified) come into play.

The big danger, however, is that the current slump in global trade will continue, and that all the extra capacity will go to waste. And this isn’t the only concern. There are serious questions about whether, given Egypt’s precarious economic situation, the expansion represents a clever strategic investment or a presidential vanity project. “From an economic point of view it can be argued, and I think pretty well, that around $8bn could have been used on upgrading Egypt’s infrastructure, power stations, mass public transport in the cities, new trams, and new housing,” Cairo-based investment analyst Angus Blair told the BBC.

Another worry is security. Egypt’s Sinai Peninsula, separated by the Suez Canal from Egypt proper, has been a hotbed of violence and instability in recent years. Even shipping has come under attack. Will more ships make the Suez Canal an even more attractive target? And will Egypt’s security forces be able to adequately protect vessels?

And then there’s the jellyfish problem. This isn’t as ridiculous as it sounds. In connecting two separate bodies of water, the Suez Canal is already responsible for disturbing the Mediterranean’s delicate eco-system. Scientists estimate that there are already about 350 non-indigenous species of marine life in the Mediterranean that have entered from the canal since the 19th century, sometimes with devastating effects: vast swarms of nomad jellyfish, which can measure dozens of kilometres in width, have closed tourist beaches, shut down power stations (when they get trapped in seawater-powered cooling systems), and frequently made commercial fishing impossible.

“The enlargement of the canal will increase the number of invasions from the Red Sea resulting in a diverse range of harmful effects on the ecosystem structure and functioning of the whole Mediterranean Sea, with implications to services it provides for humans,” Bella Galil, a marine biologist at Israel’s National Institute of Oceanography, said in the Guardian.

Not that Sisi will be too worried about the jellyfish when he finally opens the expanded Suez Canal on Thursday. Vanity project or not, he knows that his government has pulled off a miracle of modern construction. And he’ll be praying that now he’s built it, the ships will come. DM