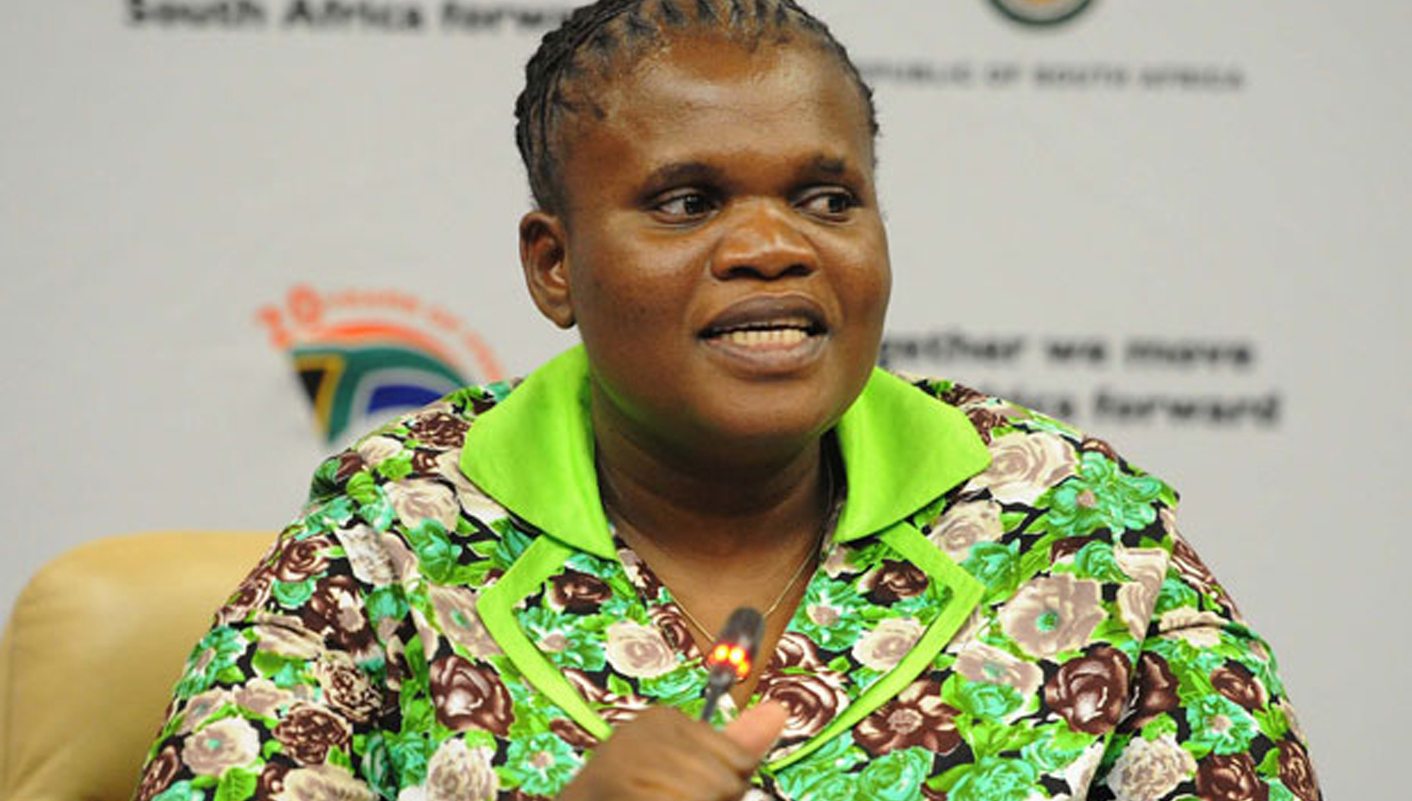 Communications Minister Faith Muthambi has just led a delegation to China ostensibly to learn more about how the country’s state-owned broadcast media works. However, as the Democratic Alliance’s shadow communications minister Gavin Davis put it, going to China to learn about media is like going to the Sudan to learn about human rights. That China is ranked by Reporters Without Borders as 177th out of 180 countries in its worldwide index of press freedom appears to be of little concern to the minister. Meanwhile, the Independent Group, which has a 20% Chinese stake, has dispatched one of its deputy editors to China on a 10-month media scholarship. By MARIANNE THAMM.

The media traffic between China and Africa has been, to a certain extent, a two-way affair. Take for example Naspers’ 34% investment in China’s Tencent social media platform, which accounts for more than 80% of the South African company’s capitalisation. In this deal, the flow is financial. A South African company is benefitting from an investment in one of the world’s fastest growing economies.

Meanwhile, a recent paper titled China’s ‘soft power’ and on Editorial Agendas in South Africa, presented by Professor Herman Wasserman of the University of Cape Town’s Centre for Film and Media Studies, noted that China had, in recent years, noticeably increased its influence on African media.

It is China’s heightened interest in South African media, however, which has raised questions about the country’s intentions and objectives which could be viewed as the seeking of “soft power”, or how it can leverage its perception and influence on the continent.

When it comes to investments in the media on the continent, notes Wasserman, SA had not been a major recipient of China’s assistance in comparison to other countries.

“The reason for this may be because of its (SA’s) relatively robust media industry,” says Wasserman

According to the Globe and Mail’s Geoffrey York, China’s investments on the continent have allowed it “to promote its own media agenda in Africa, using a formula of upbeat business and cultural stories and a deferential pro-government tone, while ignoring human-rights issues and the backlash against China’s own growing power”.

When it comes to media freedom inside the country, China ranks as one of the worst in the world. The recent mysterious arrest of several holidaymakers, including ten South Africans in Inner Mongolia earlier this month on vague charges of “watching propaganda”, should serve as one example of just how serious the Chinese state is about controlling what its citizens, and tourists, are allowed to consume freely.

But here’s a clearer picture courtesy of the Committee to Protect Journalists, a US press freedom watchdog: As of December 2014, 44 journalists were imprisoned in the country. In 2009 Liu Xiaobo, an activist who lobbied for democratic reforms and freedom of speech, was jailed for 11 years. News that he had won the Nobel Peace Prize was censored in China.

Then in 2010 Tan Zuoren was sentenced to five years in prison for drawing attention to government corruption and the poor construction of schools after buildings collapsed during the 2008 earthquake in Sichuan province. Last year, columnist Gao Yu was jailed after being accused of leaking a Communist Party communique.

The Chinese government uses an elaborate and wide system of controls and firewalls to monitor all aspects of the internet and what its citizens are able to read or consume. It also controls virtually all of the country’s broadcast and print media. While the government realises that its growing economy requires the internet for growth, it has not quite yet been able to release its iron-fisted stranglehold on information.

The country’s media policy is “schizophrenic”, according to Elizabeth Economy, a senior researcher with the US-based independent think tank Council on Foreign Relations (CFR).

Economy writes that the Chinese state “goes back and forth, testing the line, knowing they need press freedom and the information it provides, but worried about opening the door to the type of freedoms that could lead to the regime’s downfall”.

Still, the Chinese government makes the old Nats look like amateurs when it comes to censorship and repression. Which is why the Democratic Alliance’s Gavin Davis has called on Muthambi to publicly denounce China’s repressive media laws.

“We call on Minister Muthambi to publicly denounce China’s sophisticated and repressive system of state propaganda and censorship, and to reassure South Africans that their freedom to impart and receive information remains sacrosanct,” said Davis.

He added that he hoped Muthambi noted the arrest of the journalists, the fact that the Chinese government issues licences to journalists (an idea some in the African National Congress find quite appropriate) and imposes restrictions on what they can and cannot report, where the state broadcaster answers to the governing party instead of the people, and the Chinese state blocks platforms such as Twitter, Facebook, YouTube and Wikipedia

Muthambi’s office reportedly described the trip as “a good opportunity to learn more about China and its development in broadcast and the broader TV industry”.

According to the Council on Foreign Relations, more than a dozen government bodies in China review and enforce laws that relate to the flow of information into the country.

“The most powerful monitoring body is the Communist Party’s Central Propaganda Department (CPD), which co-ordinates with General Administration of Press and Publication and State Administration of Radio, Film, and Television to ensure content promotes party doctrine.”

The Chinese government also employs around 100,000 people, hired by the state and private companies, to constantly monitor the country’s internet. The CPD also provides media outlets with editorial guidelines and directives restricting the coverage of “politically sensitive topics”.

“In one high-profile incident involving the liberal Guangdong magazine Southern Weekly, government censors rewrote the paper’s New Year’s message from a call for reform to a tribute to the Communist Party. The move triggered mass demonstrations by the staff and general public, who demanded the resignation of the local propaganda bureau chief. While staff and censors reached a compromise that would theoretically relax some controls, much of the censorship remained in place.”

In 2007 US journalist Mitch Moxley worked at the China Daily and remained in the country until 2012. He later published a memoir, Apologies to my Censor, in which he describes his day-to-day working experiences.

An excerpt published in The Atlantic might give some insight into what the Independent’s deputy editor might experience. Moxley writes that his routine at the paper was to write “government-friendly” puff pieces as well as edit the opinion pages.

“Many of the articles weren’t so much arguments supported by fact, but rants supported by nothing. Many violated everything I had ever learned about journalistic ethics, including China Daily’s own code: ‘Factual, Honest, Fair, Complete’. It was sometimes hard to stomach editing the opinion pages, but I didn’t have much of a choice. I knew any complaints would fall on deaf ears.”

“The story was repetitive and nonsensical. It was the fifth of seven stories of 1,000-plus words I was supposed to edit that day, and I was getting fed up. I completely rewrote the story, which we were discouraged from doing. I removed all redundancies, awkward sentences, and unnecessary jargon. The resulting story was about half the length of the original. Although it still lacked a point, at least it was written in clear, proper English.”

The only problem was that the story was now too short to fit into the space allocated on the op-ed page. An editor had asked Moxley to work on it again. Frustrated, he retrieved the original version and sent it through as it had been written.

“Nobody said a thing,” he writes.

A week later, however, Moxley found a replacement editor as a desk-mate.

“My new neighbor introduced himself as Wang … Wang was the same age as me, thin and bespectacled with immaculate hair parted to the side. He was a Communist Party member, he told me, not because he was necessarily interested in politics or the party, but because it was key for career success.”

While Wang covered the natural resources beat for the paper, Moxley noticed Wang had begun proofreading the editorial opinion pages.

“Initially I took this as a slight to my work, and then I became nervous that my bosses had figured out that I didn’t actually read the proofreading pages … Why do they need you to work as a proofreader anyway?”

Wang had replied that the editors required him to look for “political mistakes” in the copy.

Commenting in 2013 on the Chinese stake in Independent Media, Professor Anton Harber, director of the Journalism and Media Studies Programme at the University of the Witwatersrand, said he did not think the Chinese authorities would “crudely impose their views on our media, as they do much of their own”.

“But I do think that they are likely to try and influence it for a more sympathetic view of themselves and the ANC government … It is my view that the ANC is working with their Chinese allies – ruling party to ruling party, in the way the Chinese government so often works – to increase their influence in our local media and counter what they view as a hostile media sector,” Harbor told York.

On Monday Muthambi revealed her deeper thoughts at a 2015 Ministerial Workshop on Development and TV Media for Developing Countries, which took place in Changsha City.

“Through our bilateral relations with China, we’ve achieved a lot in terms of improving the lives of our people, but my view is that our media are not doing enough to share these stories of success with our people and the people of the world. We expect our media to play their roles by reporting accurate and balanced stories … stories that will promote our mutual understanding and friendship, stories that deepen our co-operation.”

There we have it. DM