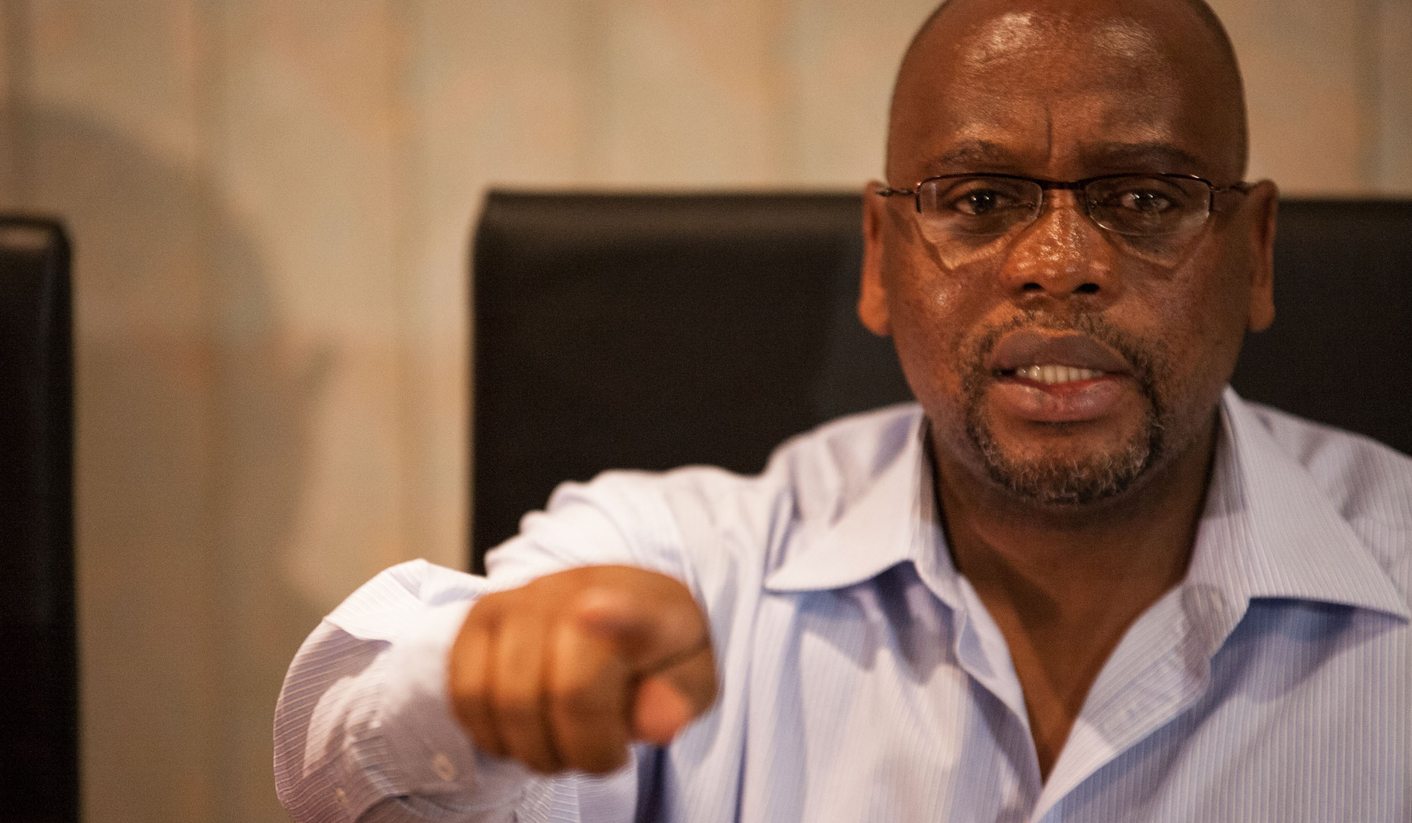 For the longest time, the national office bearers of Cosatu insisted that they have a firm grip on the federation. After the expulsion of metalworkers union Numsa and the Cosatu general secretary Zwelinzima Vavi, they argued that these were isolated troublemakers and their exit would lead to the strengthening of the federation. On Monday, the first day of the Cosatu special national congress, this was exposed as a great pretence. Workers are rebelling against the leadership, affiliate unions are divided and Cosatu is effectively dysfunctional. Although the federation’s president S’dumo Dlamini ended the day saying Cosatu was the winner, there are no victors. By RANJENI MUNUSAMY.

At 9pm on Monday night, 10 hours after the Cosatu special national congress was to have started, delegates began debating the programme. The issue was whether to stick to the programme proposed by the Cosatu central executive committee (CEC) or whether the expulsion of Numsa and Zwelinzima Vavi should be discussed. This was, of course, a major issue of contention, but up to that point, delegates could not even tackle it as they had been engaged in a protracted fight over credentials.

Unions aligned to Numsa and Vavi were opposed to the newly formed metalworkers union Limusa being part of the congress. They also argued that Cosatu second deputy president Zingiswa Losi was illegitimately in her position as she had been elected when she was a Numsa shopsteward, which she no longer was. After hours of wrangling, the matter was finally put to the vote. The congress credentials report, which included Limusa and Losi, was approved by 1,752 votes in favour and 253 against. A total of 226 delegates abstained from voting in protest over the vote.

The adoption of credentials meant the first hurdle was crossed – congress could then proceed. Had it been rejected, the congress would have had to stand down. The voting figures finally revealed the balance of forces at the congress and emboldened the faction led by Dlamini and Losi. Up to the vote, it was difficult to decipher who stood where as the lines had all been blurred.

Besides, they were always in the minority in terms of the numbers and when it came to a vote, it was clear they would lose. This had always been the source of the Dlamini faction’s strength – the numbers were on their side.

But on day one of the special congress, cracks were visible in the dominant faction. Members of the South African Transport and Allied Workers Union (Satawu) staged a protest claiming their union had not allowed them to participate in the congress as delegates. They protested against their own leaders.

It also appeared that there were divisions between the leaders of the National Union of Mineworkers (NUM) and their members. It seemed as if the NUM’s leaders were siding with the Numsa allies while their members backed Dlamini’s faction. In fact, it appeared fractures were appearing in many unions at the congress, including police union Popcru and teachers unions Sadtu, which had appeared to be firmly in Dlamini’s corner.

It was no wonder then that for the first time, the media was shut out of a Cosatu congress. Security personnel were openly hostile to journalists, as were some delegates. Even during the lunch break, when the media was let into the meeting hall, security guards threatened and bullied journalists, including for taking pictures of the stage.

The lunch break took place well after 3pm, while battles over credentials were still raging. Much to the Cosatu leadership’s chagrin, information was filtering out and journalists tweeted throughout the day despite the media blackout. During the break, Dlamini and Losi were seen in intense discussions with ANC leaders including treasurer general Zweli Mkhize and national executive committee member Ebrahim Patel. ANC and South African Communist Party leaders attending the congress looked worried as the disputes continued. ANC national chairperson Baleka Mbete, who was meant to address the congress at 2pm, left the venue after 6pm when it was clear there was no prospect of the procedural matters being resolved.

The voting figures over the credentials showed that Dlamini’s faction had numbers on their side even though the rebel unions would not give up the fight easily. The national officer bearers also proposed a vote on the programme when some of the dissidents proposed that Numsa and Vavi’s expulsion be discussed. When this was turned down, delegates began streaming out of the venue.

Well after 10pm, Dlamini addressed a partially empty hall, saying he would not deliver his opening speech as delegates were tired and proceedings would continue on Tuesday morning. Dlamini presented the day’s events as a victory for internal democracy as there was “no blood on the floor” as procedural matters were dealt with. “The winner of the vote was Cosatu,” he said.

But Dlamini, like everyone else, came away from the first day of the Cosatu special national congress bruised and battle weary. While it had been easy to get their way at Cosatu CEC meetings with number on their side, it is much more difficult to do so at a mass meeting of workers.

The contentious issues of credentials and the programme may be dealt with but there is no certainty that workers would toe the line on Tuesday and stick to the proposed generic discussion on “unity and cohesion” in Cosatu. Dlamini was clearly anticipating more trouble as he invited journalists to return to the congress on Tuesday but said only some of the sessions would be open to the media.

It was expected that Numsa might protest at the venue but they did not need to. Their presence was felt throughout the day, even though they lost the battle to have their and Vavi’s appeal heard. They will also be angered by the fact that the substitute metalworkers union Limusa is allowed to participate and their campaign to have Losi ejected did not succeed.

The turmoil of the first day of the special national congress is an indicator of how derailed Cosatu is and that “unity and cohesion” is a pipe dream. Clearly it was a gamble to hold the congress in an atmosphere of so much turbulence when there can be no definitive outcomes. Dlamini knew this from the start and was therefore reluctant to convene it. His opponents knew this congress would undermine his authority and therefore pushed for it.

There cannot be many people in the embattled federation looking forward to day two. DM