What’s in a name? PJ Powers disagrees with a liquor store advert 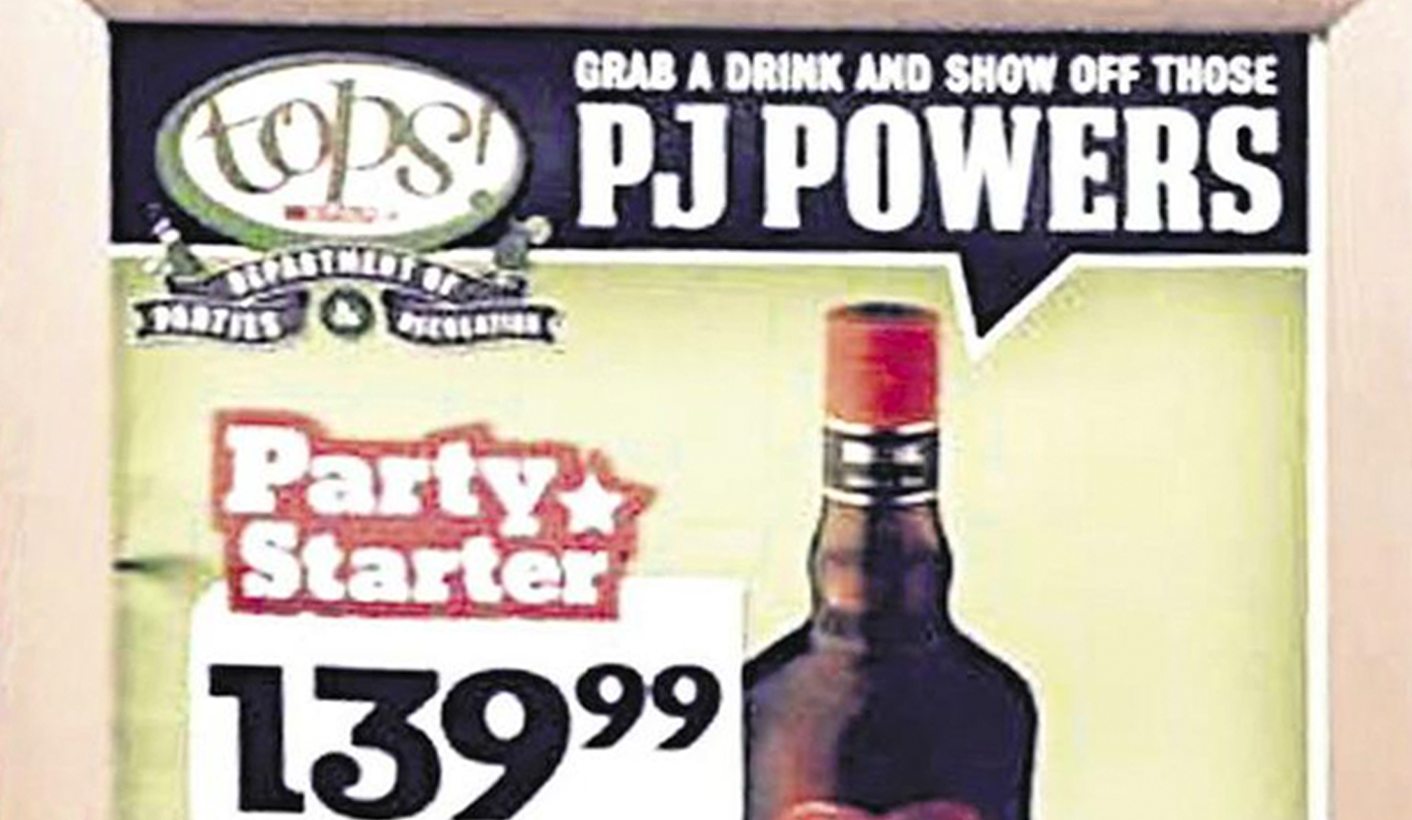 The free market is a ruthless place where gazillions of products and brands compete for the attention of potential consumers. It is a space where a colour, a few bars of music or even a typeface can come to be associated with a product, service or brand. In this noisy marketplace, established and iconic celebrities too can be used to promote or “push” just about anything – usually with their permission, of course. Which is why local veteran singer PJ Powers – who also happens to a former alcoholic – is upset about the apparent use of her name to promote a monthly special by a local liquor outlet. By MARIANNE THAMM.

Imagine, if you will, the advertising brains tasked with conjuring the “Grab a drink and show off those PJ POWERS” tagline for the Tops at Spar June promotion for alcohol specials at the store and which will be appearing in newspaper spreads and elsewhere until the end of the month.

Client liaison person: “Ok guys, you know the client is all about fun, fun, fun party and alcohol, of course. It’s winter, it’s cold, people generally don’t like to go out…come up with something that will get them rushing in to stock up on the specials. It better be good…off you go.”

Advertising person one: “Mmm…what to people do when they don’t want to go out? … I know! They stay at home and wear their pajamas.”

Advertising person two: “How do you spell that actually? With an ‘a’ or with a ‘y’ as in pyjamas?”

Advertising person one: “I don’t know actually…Mmmm. Tricky. Why don’t we just shorten it to PJ? Just to be on the safe side.”

Advertising person one: “Huh? Oh wait…wait…I feel a tagline coming on…yes, yes…I’ve got it ‘Grab a drink and show off those PJ POWERS’…and we do the PJ POWERS in caps. What do you think?”

Advertising person two: “Fucking brilliant man. You know you’re a genius…How did you come up with that, man?”

Advertising person one: “I dunno…just free associated some words and bang, there it was.”

*High five on the way out*

PJ Powers is, of course, a well-known and, some would say, iconic South African songwriter and performer. She’s a household name, like Marmite and Omo – and she’s been one for over 30 years. Powers has had countless gold, silver and platinum hits/CDS/MP3s. She sang the World Cup anthem “World in Union” in front of a global audience of millions in 1995. She also happens to be a very publicly recovering alcoholic.

Which is why the singer and her manager, Yvonne Johnston, are objecting to the Tops at Spar “PJ POWERS” campaign and have written to the Advertising Standards Authority highlighting that the ads are in breach of Clause 11 section II of the ASA Code, which relates to the protection of privacy and exploitation of the individual. While the ASA Code allows for swift remedy, there is no provision for compensation.

In her letter of complaint, Johnston states “It is accepted that the word ‘PJs’ can be synonymous with ‘pyjamas’, however, this is not true of ‘PJ’. The advert does not read, ‘PJ Party’, but ‘PJ Powers’”.

She goes on to point out that “clearly, the reasonable interpretation of the headline is that ‘PJ POWERS’ refers to the well-known musician and recovered alcoholic. Being a headline of an ad for alcohol, it is particularly offensive to PJ Powers. As is commonly known, PJ Powers is an alcoholic in recovery and the unapproved use of her name in an ad for alcohol is extremely distressing to her, as well as very damaging to her reputation for sobriety.”

Johnston asserts that the use of PJ Powers’ name in an advert for alcohol “is inconsistent with her right to a reasonable degree of privacy and constitutes an unjustifiable commercial exploitation of her fame and reputation”.

Tops at Spar posted an apology on its Facebook page that reads, “We would like to apologise to those who were offended by our message. The line was used as a play on words to refer to the Pyjama Party theme for the month of June. The theme is linked to the message from our Minister of Parties and Recreation: ‘No slumber, only party!’ We never intended to offend anyone and sincerely apologise.”

Of course you didn’t. You sell booze.

Meanwhile, TBWA Hunt Lascaris (Durban), the agency which came up with the Tops at Spar ad, and their attorneys, have written to Johnston and Powers, explaining that in their view, there was no unlawful use of the expression “PJ POWERS” and that the word “pj” is generally understood to mean pyjamas – and also that any “reasonable South African” would understand a “pj party” to mean a pyjama party. Um, ja well no fine.

The agency and the chain does not believe it acted wrongfully and that there was “fair use” of the expression “pj powers”.

The matter has attracted considerable interest, not only from fans of PJ Powers, who have rallied and expressed their support of her outrage and disgust with the opportunism of the ad, but also on Twitter, where Bryce Phillip Wray, self-described as a “commercial litigation and aspiring media lawyer”, tweeted: “PJ powers matter interesting from an actio iniuriarum perspective. Right to privacy, dignity, identity issues. Kumalo vs. cycle lab and le roux vs dey grappled with similar issues”.

“Kumalo vs. Cyclelab” refers to a 2011 lawsuit in which TV producer, businesswoman and former Miss SA, Basetsana Kumalo, claimed R750,000 damages in the North Gauteng High Court from Cyclelab after the owner, Andrew McLean, had published – without her permission – a photograph he had taken of Kumalo in his shop as part of an advertisement he placed in a magazine.

In that case Judge Phillip Boruchowitz found that Kumalo’s image had been used in a misleading fashion and created the false impression that she endorsed products sold by Cyclelab. He ruled that her right to dignity had also been infringed.

Darren Olivier, writing on the Kumalo vs. Cyclelab matter on the weblog Afro-IP – which provides news on intellectual property law – noted that the case was “indicative of the attitude of many businesses in RSA who are prepared to ‘take a chance’. One cannot help but admire Kumalo, who has not only worked hard to create her brand and image, AND is prepared to enforce it…”

He added that the facts of that case “sit wonderfully at the crossroads of passing off, trade mark infringement (not mentioned by the Judge), common law personality rights and the constitutional right to privacy.”

While no image of PJ Powers was used in the ads, it is disingenuous of Tops at Spar to plead ignorance when it comes to recognition or “brand equity” in this case. In her complaint to the ASA, Johnston wrote that in the Happy Sindane matter, where the paint company Dulux had used him to promote their product and immediately admitted its guilt and withdrew and compensated him, “Tops at Spar is rather endeavouring to justify its exploitation of PJ Powers’ right to privacy and dignity”.

Powers and Johnston are seeking a public apology from the chain “in all or some of the media in which the advertising complained of appeared, or media considered appropriate by the ASA.”

While some may argue that Johnston and Powers’ complaint to the ASA drew attention to the specials that Tops at Spar are promoting, what it does serve to highlight, more importantly, is the shameless mediocrity of those charged with advertising a product in a country where we have the honour of being one of the largest consumers of alcohol in the universe. A simple photograph of the bottle with a price would have sufficed. DM